The first concern for global investors to start this week was the health of the US President following his admission to the hospital for treatment after contracting the coronavirus late last week. That wasn’t an inherent perspective of support but rather acknowledgement that Trump’s incapacitation could even further exacerbate the uncertainty already painting the fundamental backdrop. After favorable statements by his medical team and his eventual release from the hospital to return to the White House, the market seemed to exhibit a sense of relief. Yet, how much relief is there when we consider the ‘back to normal’ rally potential? Only days after a positive diagnosis and his treatment ongoing, the President’s health is still an open question. Yet, from a market perspective, the S&P 500 hardly wobbled on the news initially. There is a lot more circulating in the speculative current than just the immediate care for the leader of the world’s largest economy. And that should keep us on guard. 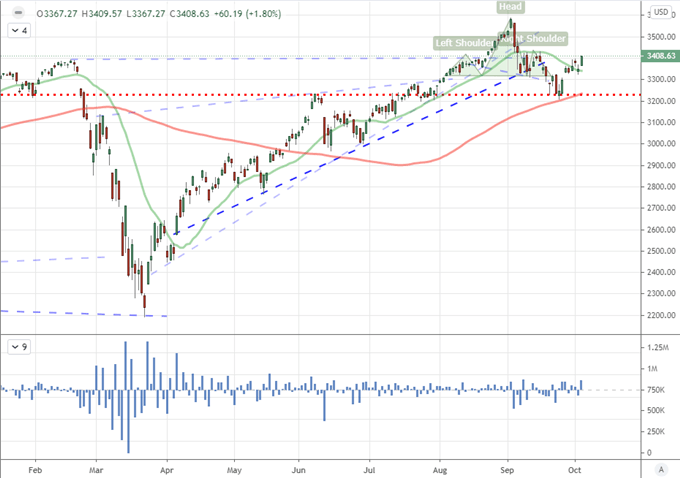 What was interesting to see through Monday was that risk appetite didn’t seem to truly solidify until the US trading hours. If there is to be a continuity to the speculative resurgence, we would expect to see it carry over to the Asian and European sessions Tuesday, to be picked back up in New York when US traders are back online in earnest. Thus far, there isn’t much of a charge in sentiment to speak of. If risk appetite is at the foundation of the market’s efforts, the scope for a lasting trend is materially higher. Yet, despite the breadth of speculative appetite in the like of US indices, the emerging markets ETF, junk bond ETF and crude oil during New York trade hours; a lack of carry over bodes poorly for development of such trends. It is possible that risk appetite survives exclusively in the US session, but that is very unlikely. 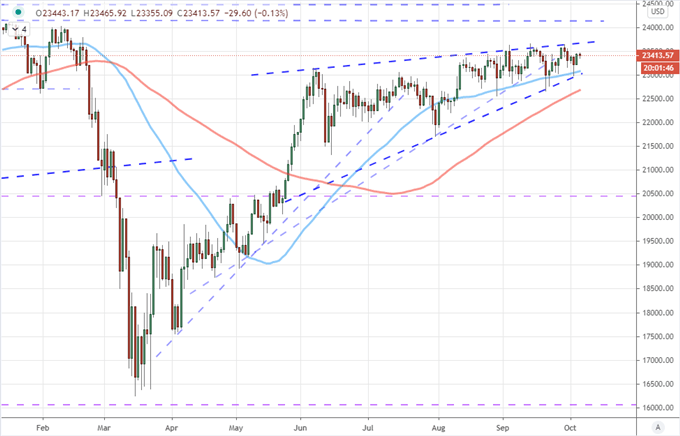 The Fundamental Weight of EURUSD

I continue to advocate for a close observation of EURUSD – as a barometer for the broader market’s key fundamental themes as much as for its own merits. Monday, the benchmark exchange rate broke back the ‘neckline’ of its August-September head-and-shoulders pattern which formed resistance out of the former support. Technicals work best when they operate in concert with fundamentals and markets conditions…which this situation doesn’t seem to reflect. For the latter, more abstract considerations; there are very few unencumbered trends to be found among the risk-leaning benchmarks. Failed breakouts or outright ranges are far more common. On the fundamental side, the picture seems to be drawing greater sway against the market’s natural habits.

Chart of EURUSD with 50 and 100 Day Moving Averages (Daily) 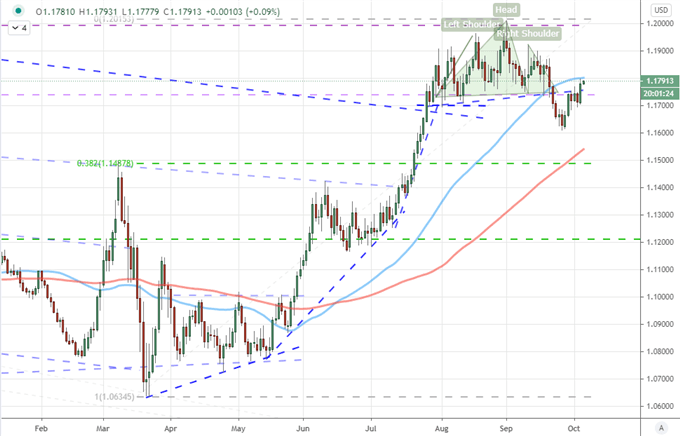 EURUSD is a particularly interesting milestone for the markets at large thanks to its ability to tap into multiple key themes. Prevailing fundamental health would be the easiest facet for which we could revert, however, markets are more interested in what lies ahead rather than tempo from the recent past. Therefore, matters like the relative stimulus are of significant weight. Fiscal stimulus found European ministers agreed Monday to extend its suspension of budget rules on debt sales through 2021 in contrast to the United States inability to strike a follow up to its long-expired CARES act. The monetary policy side should be of more immediate interest Tuesday with ECB President Lagarde and Fed Chairman Powell due to speak. It is worth noting in the former official’s case, the Eurogroup’s Chairman echoed something from central bank rumination that the Euro has been strong owing to its robust Covid response. That would be quite the Catch-22 scenario with very few routes to act. 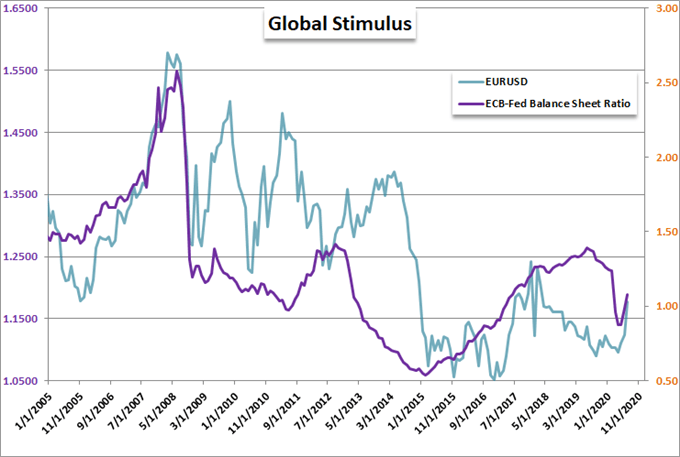 The Systemic Themes to Watch Through Tuesday and Beyond

For US markets and risk trends at large, political stability should be considered a top concern. We are less than month out from the US election, and the President’s health scare doesn’t seem to have pulled the balance materially back towards balance. If there is a run of long-withheld means of support, like an infrastructure stimulus program, it may present a material shift in the equation. Otherwise, the principal route seems one of inherent volatility as uncertainty reigns. 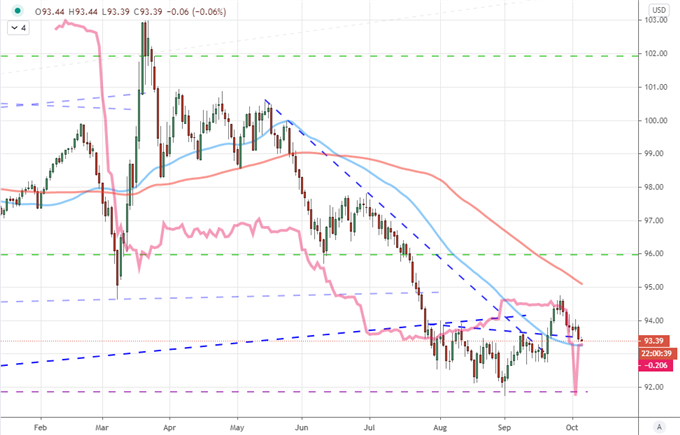 Another global theme that can effect both relative valuation and broader risk trends is the state of the pandemic. Cases of coronavirus across the global remain disturbingly high, with many of the world’s largest cities warning of curve steepening and perhaps official response to the struggle. That said, there is also unmistakable relative perspective to be drawn from this situation. The US has long held position against a second wave of economic shutdown to combat the pandemic so as to support the broader economic recovery over the healthcare implications. What is novel is the indication that some other countries may follow a similar route. Germany’s economy minister intimated a similar strategy for Europe’s largest economy should similar circumstance afflict going forward. 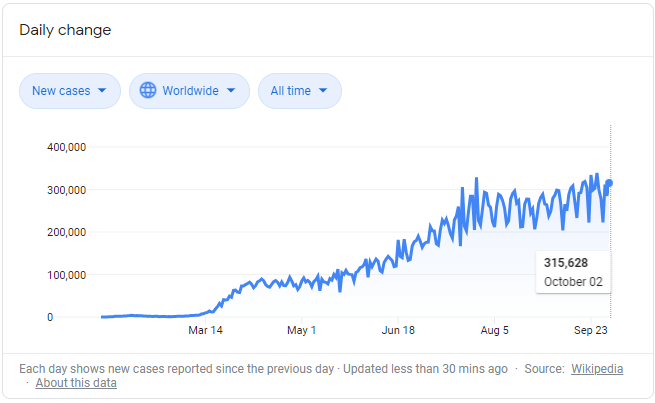 Looking ahead to Tuesday, monetary policy is perhaps the most representative theme on tap. The Reserve Bank of Australia (RBA) rate decision is the most overt event in this vein, but I would place more weight on the Federal Reserve and European Central Bank’s leaders scheduled remarks. Jerome Powell and Christine Lagarde will attempt to carefully walk a line whereby their views set the right tone for speculators. Both have indicated that they are willing to entertain more stimulus, but the actual options are a mystery – and ultimately dubious. Meanwhile, ‘rudimentary’ growth indicators are of great value of their own. The ISM service sector indicator was of particular influence for the US, but further indicators moving forward will continue to shape this critical value argument. 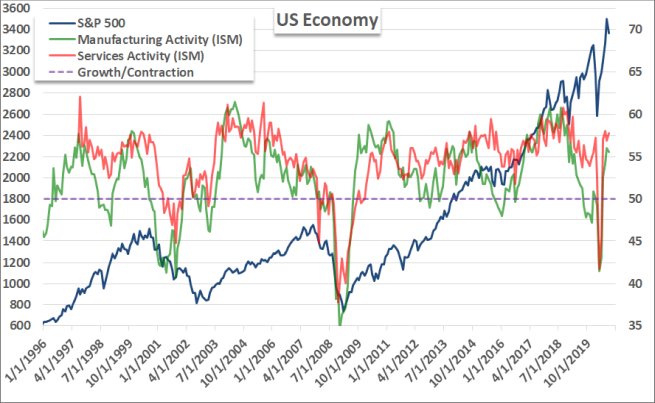