EURUSD Moves from Under the Debate Cloud, Now Growth and Stimulus Top Drivers

After the Chaotic Presidential Debate

In the aftermath of the first US Presidential debate of 2020, the market find itself relieved of the expectation but unmotivated by the hectic event. The globally ‘hyped’ event certainly delivered in terms of drama, but it didn’t readily settle the outlook for those considerations that matter most for markets. Policies for supporting growth, mustering stimulus and fighting the coronavirus’s economic scourge were afterthoughts – if addressed at all. That curbs the opportunity for this otherwise overwhelming event to be a key catalyst, but it also removes an active anchor against fundamental themes of other stripes. Now, key updates on growth or stimulus headlines are more capable of directing market-wide trends. For the milestones of this fundamental shift, my attention actually turns to the US Dollar. The benchmark currency is a representation – and prioritization – of US stability, haven status and relative growth. Technically, the DXY retreated to a critical former support as new resistance level; and the political angle (in the image, is the Trump-Biden support difference according to blockchain tabulation) is certainly filtering through. 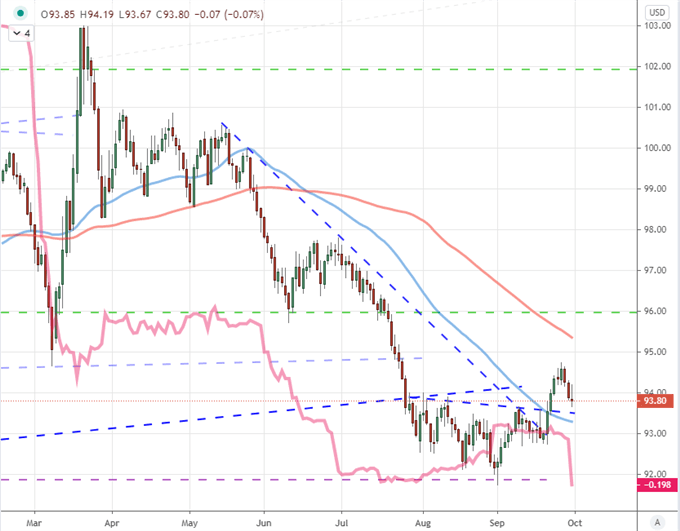 As for the United States’ – and truly the world’s – preferred speculative benchmark, the S&P 500 responded to the lifting of anticipation with a rally that would be cut down. Tempting the weight of the index’s 50-day moving average, a general hold of the level with a provocative intraday reversal (and ‘wick’) would remind that the market is not ready for an unchecked return to its bull wave to record highs. Interestingly, most ‘risk’ leaning assets this past session were showing similar performance during New York trade hours Wednesday. This smacks of a market looking for a new active guide. 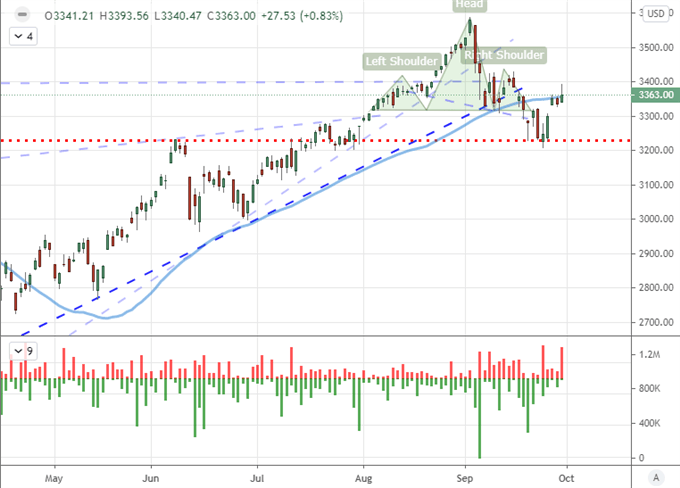 Looking back to my polls for the last time, the relief rally that was building into the debates left a very clear split between those that believed the event was a critical market factor or not. The first trading day after the event seems to argue that it was not a critical theme as there wasn’t a material trend to arise in its aftermath. However, the lift of a dampener could be argued as a material influence as well. 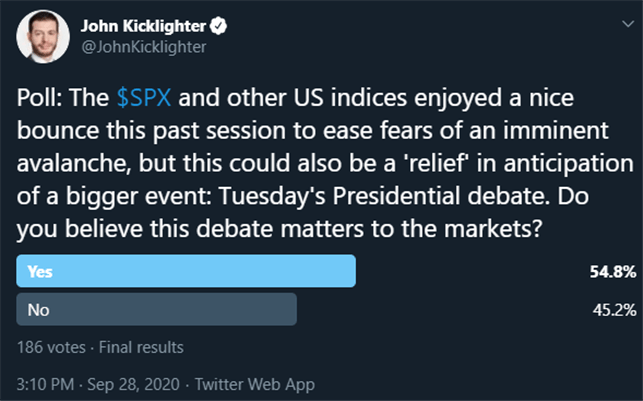 The other poll to revisit was the one run through the @DailyFX handle. Asking traders what they thought would happen to the S&P 500 after the debates was a more direct variant of the previous question which made traders put their analysis into a market perspective. While 38 percent believed the market would continue rallying after the event – and the benchmark did indeed post a gain Wednesday – we are too early into the phase to post a true call. I personally voted ‘no’, not because I believed the market couldn’t advance. Rather, I believed the removal of a blockade was not the same thing as a motivation higher. An external driver was needed to rouse bulls and the other themes were not readily bullish supports. 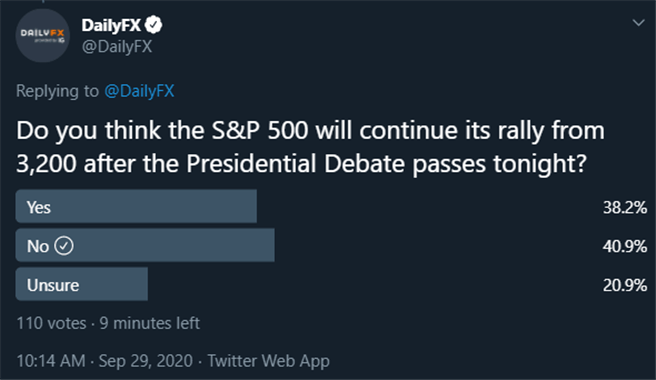 The Motivations for October and Systemic Fundamental Themes

From a ‘market conditions’ perspective, we moving into the month of October. Historically, this is a period for the benchmark S&P 500 and its derivatives as a period of top activity and volatility. This month represents the highest average volume for the index while the VIX volatility averages its peak through the same period. That represents a backdrop whereby the potential for rapid change is exceptional. Traders beware. 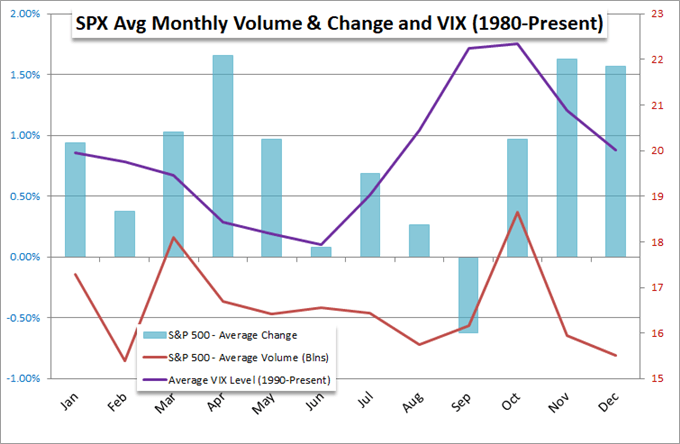 A sensitivity to change is one thing, but the motivation for developing a meaningful trend long the lines of risk appetite – bullish or bearish – usually requires genuine fundamental motivation. Looking to the systemic themes, the most representative current on hand is the backdrop for growth via key data points. This past session’s ADP private payrolls figure beat forecasts with a 749,000 net increase for September; but optimism will not likely follow this thread given its divergence from the more prominent NFPs. 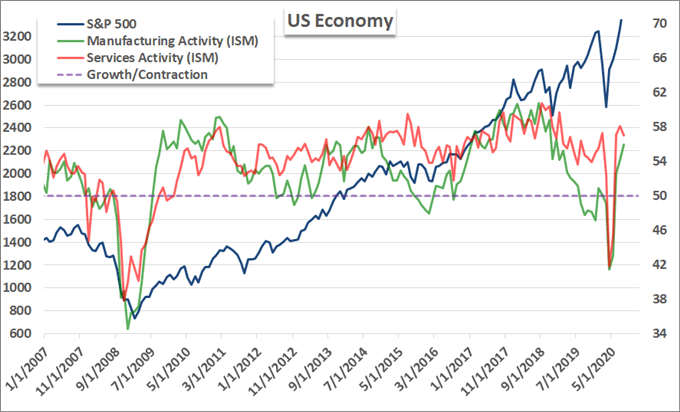 While Europe was also facing its own economic releases – like German retail sales and employment changes – the benchmark EURUSD is working with multiple overlapping fundamental matters. For example, the matter of stimulus draws contrast between the two, though they are starting to both trend towards skepticism. Despite headlines of talks between Treasury Secretary Mnuchin and House Speaker Pelosi this past session, the two sides reportedly failed to find a compromise on the latter’s proposed $2.2 trillion follow up. With Disney announcing 28,000 layoffs Tuesday and American Airlines furloughing 19,000 afterhours Wednesday, the need for support is far more pronounced. Meanwhile, EU officials have voiced warnings that their massive stimulus effort (750 billion euros from the ECB and 1.07 trillion in budget) was in jeopardy owing to issues like ‘rule-of-law’ breaches. What does that mean for EURUSD at 1.1750? 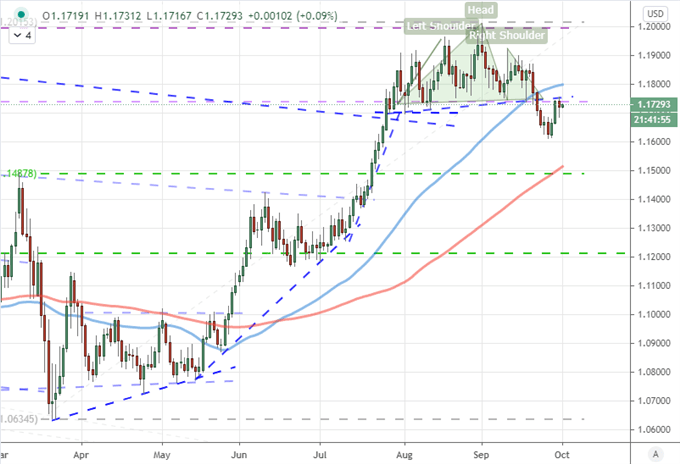 Another major Dollar-based exchange rate to watch with the relative factors of growth in upheaval is USDCNH. While the world takes China’s data with a grain of salt, the county’s official PMI figures for September crossed the wires with a further upgrade in growth (51 to 51.5) while the service sector report faired even better – reinforcing expectations that the government will turn to domestic demand to fuel its growth in the near future amid the coronavirus and unfavorable trade backdrop. And on the stimulus side, the PBOC readily announced a new ‘counter cyclical capital buffer mechanism’, showing there is no delay in stimulus response. 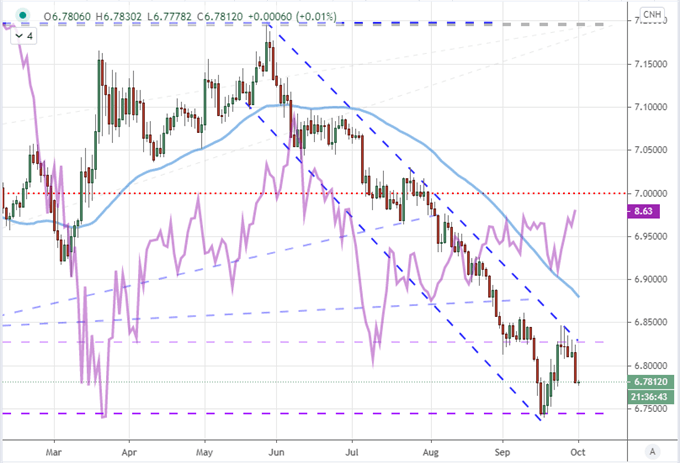