Risk Aversion Takes a Turn Through the US Session

Sentiment was on a firm footing to start this past sessions, but market appetite fell apart as the day wore on. For the S&P 500, the second consecutive gap higher was a far more reserved affair that struggled to draw on a fundamental tap with Fed Chairman Powell’s calls for more stimulus and the uneven September PMIs doing little to inspire true conviction. Ultimately, by Wednesday’s New York close, the benchmark US index dove for its biggest single-day loss in two weeks. Yet, the tempo was less remarkable than the progress this session has caved out. With this day’s performance, the SPX is down 9.6 percent from its September 2nd close – the record high. Technically speaking, a -10% retreat from highs is considered a ‘correction’ and the -20% mark is a ‘bear market’. Such a milestone would quickly spread through the market’s headlines and likely compound risk aversion. Be wary, sentiment can be its own driver – even amid a crowded fundamental backdrop. 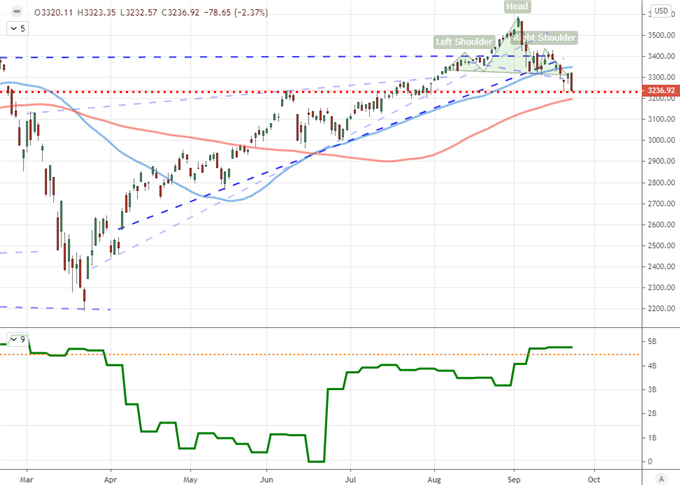 Of course, when it comes to something as pervasive as the perspective on risk appetite, I don’t just rely on a single benchmark – even one as influential as the S&P 500 or Dow. Notably, the Asian and European indices for Wednesday were relatively stable – if not positive – through the progression of their respective sessions. That suggests that sentiment soured explicitly in the New York session. That said, the potential for the risk aversion to carry over was palpable in measures like the VEU ETF. This US traded ‘rest of world’ equity ETF extended this week’s slide Wednesday and puts the next session in clear risk. 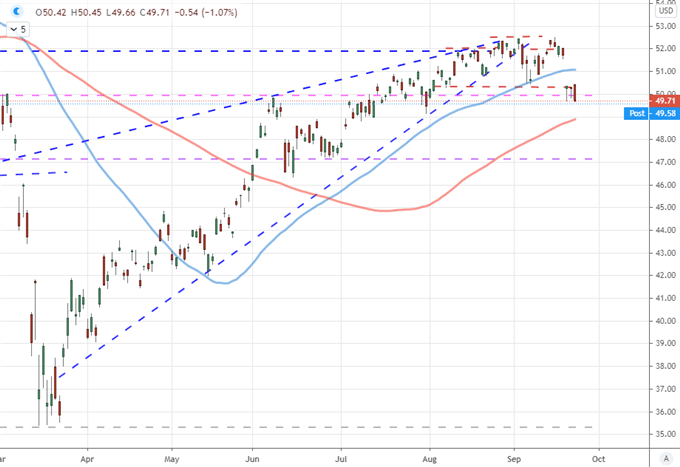 With the active dispute around speculative conviction, it is worth keeping the results of my poll from Monday in mind. With a technical transition loaded at hand with a dense fundamental backdrop, there is an environment that can urge capitulation as readily as the relentless ‘buy the dip’ mentality that has kept the markets upright these past years. It’s worth pointing out that the majority in my survey believed something more painful was underway. 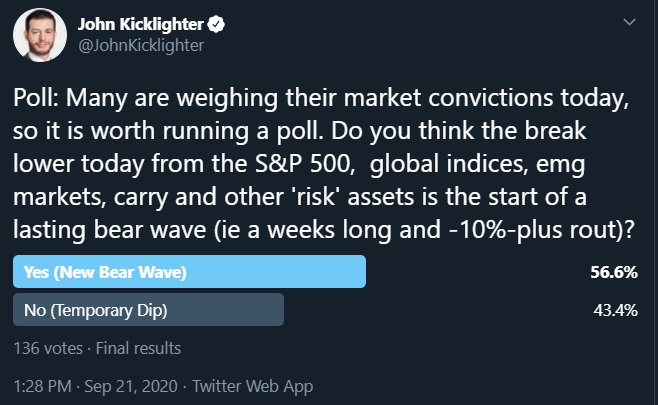 While the US indices and other risk assets slipped back into their broader retreat, the US Dollar extended a more consistent advance of its own. The DXY Dollar Index advanced for a fourth consecutive trading day. The stretch was the most progressive for the Greenback in five months, but I’m more impressed by the progress rather than the pace. With this past sessions climb we are putting further progress towards clearing the inverse head-and-shoulders ‘neckline’ break. This is a classic technical reversal pattern, but it is important to evaluate what is the motivation for the drive? The (inverse) correlation to risk assets is notable, but the currency is more of an extreme haven. Is there enough relative growth and yield potential to the US to keep this wick lit? 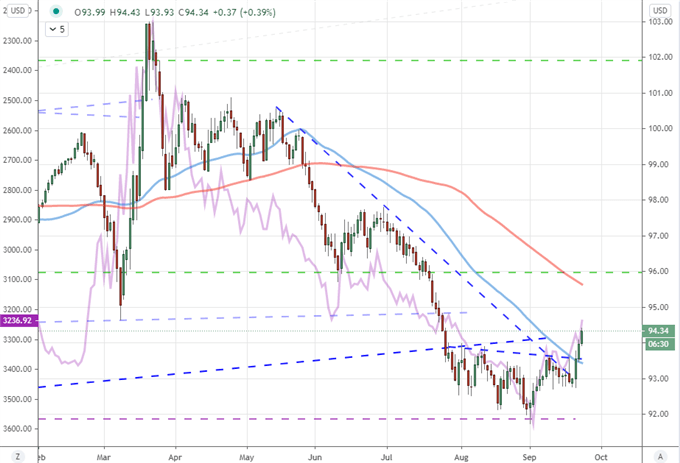 Plotting the Dollar’s run through its most liquid exchange rate, EURUSD is looking the mirror of the DXY with a head-and-shoulders breakdown. There is a tendency among observers to apply an expectation of natural ‘gravity’ to such technical pictures. Of course, that doesn’t practically exist in markets, but there is fundamental skew that can work to similar effect. The most interesting catalyst on that front may be the monetary policy. The ECB has suggested it is monitoring the level of the Euro (code for its belief that it is too high) while Fed Chair Powell called for more fiscal stimulus in his second day of stimulus – localized capital infusion seems to be a booster rather than detractor for currencies as of late. 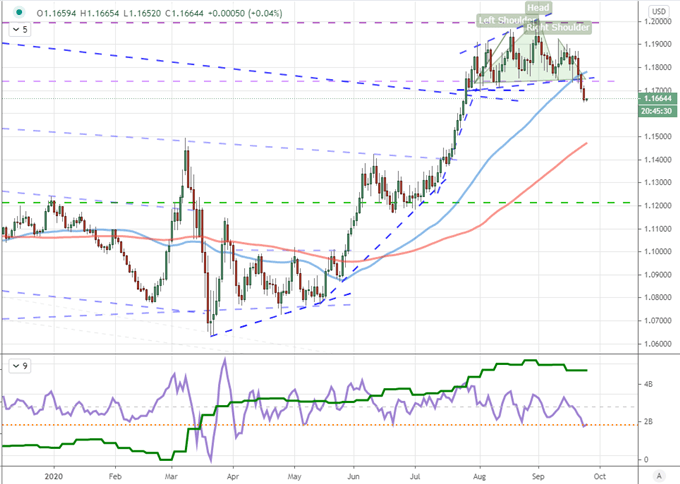 For a different fundamental view, the Greenback’s appeal as a safe haven generally treads a very different path. Against the likes of the Euro, which backs the second largest economy in the world, the Dollar is struggling with its traditional safe haven role. The question is not just sheer liquidity but commitment to economic recovery amid the coronavirus. Some of that ambiguity is made clearer for pairs like AUDUSD where scale of economies is dramatically different and support by authorities is sharply askew. This pair also strikes a remarkable technical pose as its technical arc is clearly faltering. 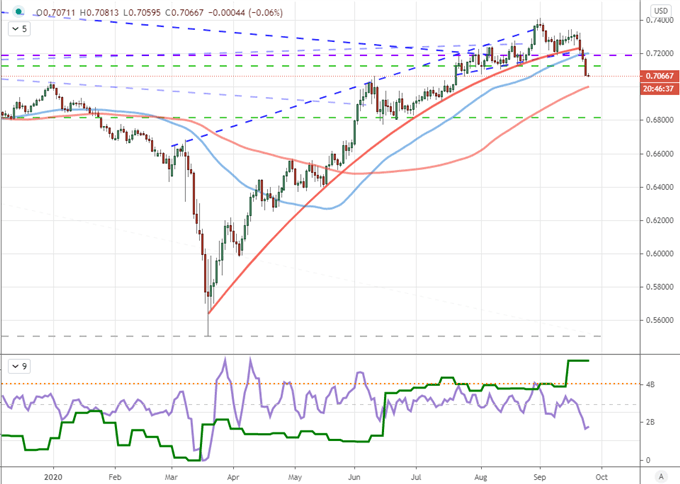 While technicals are informative, I remain focused on fundamentals. Sentiment can collapse under its own weight – frankly it is an overdue course correction – but the transition is best served with a banner for market participants to follow. Geopolitical uncertainties in the US is a serious flashpoint that has yet to seriously detriment the Dollar to its counterparts – but that is a distinct possibility moving forward. Fed Chair Powell and US Treasury Secretary Mnuchin’s references to stimulus should be watched as the assumption of persistent salves for economic inadequacy are an important measure. The coronavirus is another constant. The rise of cases worldwide is bringing attention to the flu season and situations like the US election. Among the major economies, the UK seems to be one of the more at-risk countries with the potential for economic shutdown procedures also representing fundamental risk for the Sterling. 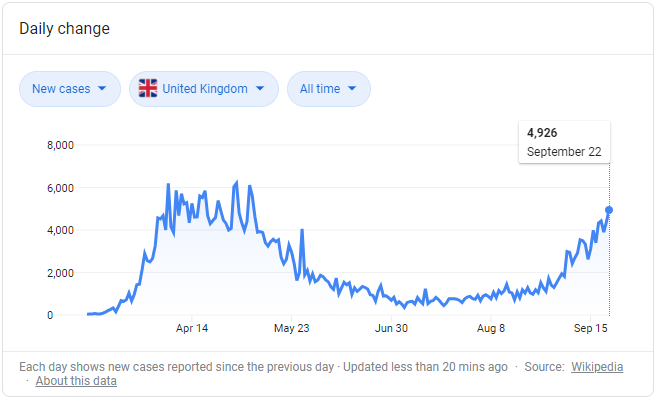 For scheduled event risk, the September PMIs were this past session’s top event risk. The timely proxies for GDP signaled a fairly uniform edge higher in manufacturing activity and subsequent slip in service activity. The composite figures (below) was a mixed bag. There was not enough there to catalyze fear of a stalled recovery single-handedly but market participants should be far more cautious moving forward. For them this upcoming session, it seems monetary policy is top of mind between rate decision from the SNB and Mexican central bank among others while the Fed’s Powell and BOE’s Baily speak on behalf of their banks.

Read more on how central banks impact the forex market in the DailyFX Education section. 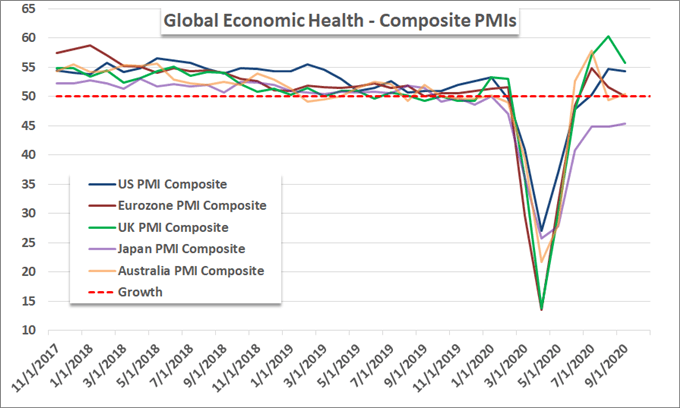