S&P 500 and EURUSD Escalate Debate Even Further: Was That the Break?

The new trading week opened to an unmistakable shift towards ‘risk off’. Through this past week’s close, it was really only the S&P 500 that was committing a meaning technical break with its slip below the 50-day moving average. Through Monday’s session, the slump in speculative appetite reached far wider. Of course, we have seen many ‘broad’ but ‘shallow’ moves towards risk aversion in the past months which have hardened many traders against committing to a sense of fear. What makes this particular situation different? Is the burden of seasonality pressure the difference maker? Perhaps the overriding number of systemic issues is finally swamping the boat? Or perhaps we have seen trader sentiment triggered by the wrong (right?) break lower? I put the question to the market: is Monday’s technical break the real deal? Interestingly, this poll’s results are close to 50-50 for bullish versus bearish forecast versus the nearly two-thirds support against ‘buying the dip’ in the Nasdaq’s case two weeks ago. 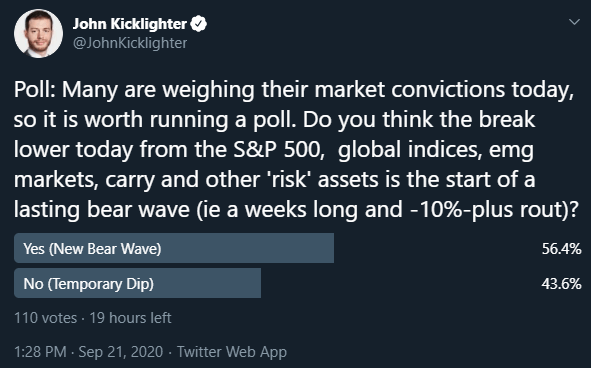 As far as meaningful technical cues go, the S&P 500’s guidance for the major US indices would go a long way to rousing the latent bearish fears that have been quieted by engrained complacency. The benchmark opened this new trading week to a sizable gap lower to start the week and make a very provocative technical charge to clear the index’s head-and-shoulder’s ‘neckline’. That said, with an afternoon recovery that reversed all the active New York session extended selloff, there was enough ambiguity to pull the bulls out of premature hibernation. Despite the scope of the break, the question over whether this truly constitutes a breakdown is very much up in the air. 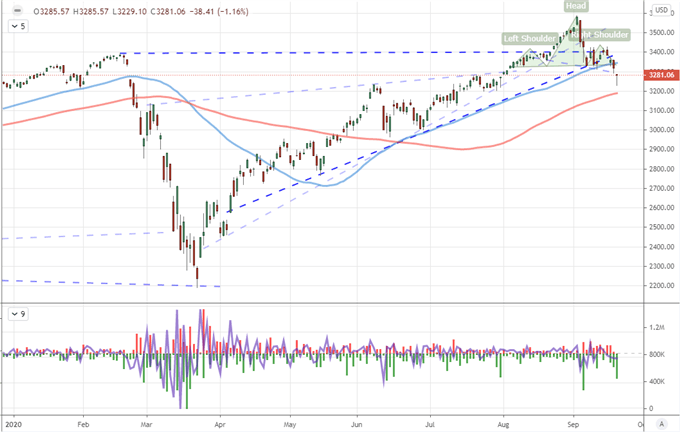 Measure Sentiment Not By Its Leaders But as A Market

Gauging something as systemic as ‘risk aversion’ is not just the assessment of a single convenient benchmark. I like to follow the S&P 500, Nasdaq 100 and other indices as they are ready-made magnets for speculative interest; but they are also critically isolated when it comes to a big picture view. My preferred measure of ‘risk on, risk off’ is a gauge of breadth in speculative build up or deleveraging. That is best described as a scale of correlation across otherwise loosely related measures to fear and greed. As it happens, this week has seen a much broader trip into the gloom with key indices like the German DAX and Japanese Nikkei 225, EEM emerging market ETF, HYG junk bond ETF and AUDJPY carry trade among others following suit. More of the market is in a position to falter under its fears which puts a true trend much closer at hand. However, I remain cautious of projection conviction.

Chart of Severity in Risk On / Risk Off 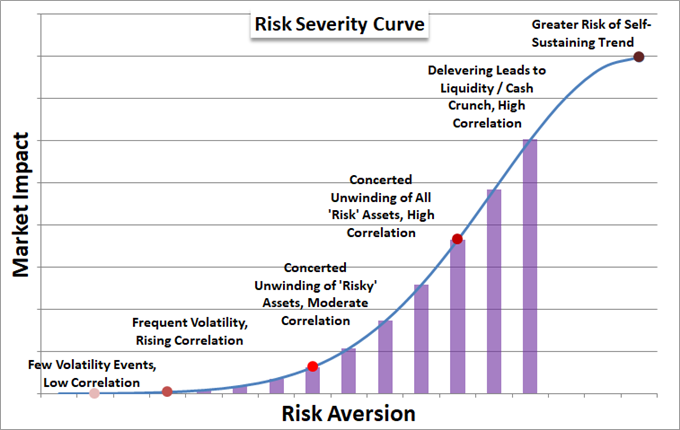 Another worthwhile measure of peak speculative performance versus the full market is the Nasdaq 100 to S&P 500 ratio. This is a comparison across benchmarks that have generally performed well these past years. Whether through comparative economic advantage, a preference in stimulus efforts or some other measure; the US indices have been pace setters. Yet, within this category, there is a further hierarchy. The tech sector has drawn far more risk interest than the broader US market which is an appetite exploited by the NDX-SPX comparison. As it happens, that ratio jumped sharply this past session. Sentiment may be on a shaky ground, but the ‘buy the dip’ mentality is proving difficult to undermine. 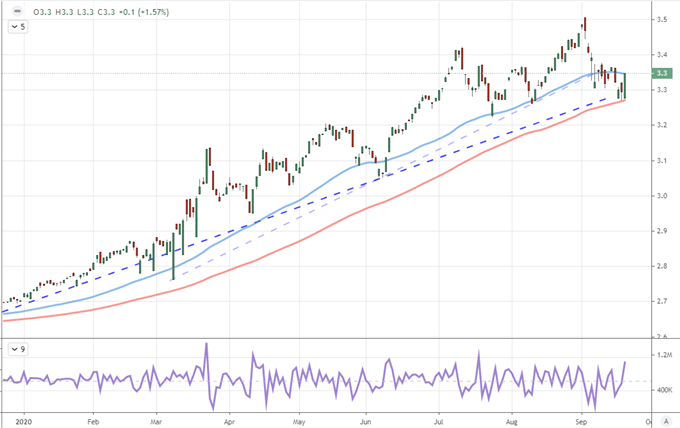 The Dollar and Safe Havens Paint an Unusual Picture

In such a broadly motivated market, it is worth evaluating the charge at the other end of speculative spectrum. If high-degree risk assets are under significant selling pressure, it would make sense that so-called haven assets should be facing an equally-leveraged bid. Yet, two of the most recognizable safety-oriented assets showed a mixed charged to start the new trading week. For the world’s most liquid asset, the US Dollar, there was an unmistakable bid to start the week. From the leading liquidity EURUSD though, the Greenback’s charge wasn’t enough – at least not yet – to pushing the pair below prominent technical boundary, a ‘neckline’ for a two-month head-and-shoulders pattern. The critical milestone may still be ahead, but it wasn’t in the cards for Monday. 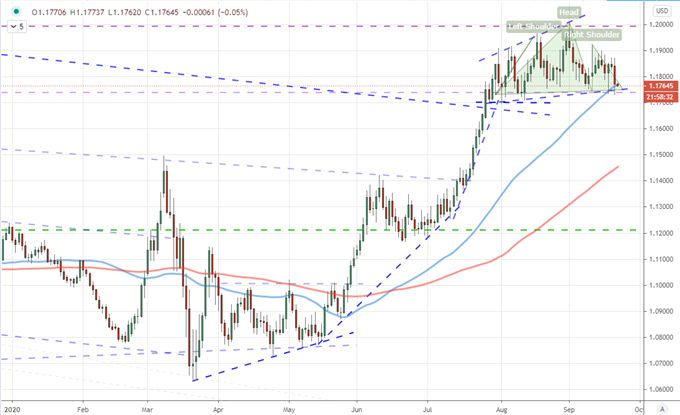 Another recognizable safe haven that seemed to be fall short of the dramatic was Gold. The precious metal put in for a heavy day Monday, but the decisiveness of a breakdown was still open to ambiguity Monday with 1,900 still in place. There were some interesting takes on this reservation such as the influence of the US Dollar and the state of real yields. Pricing the precious metal in an equal measure among the major currencies (Dollar, Euro, Yen and Pound) results in the same ultimate position. Further, yields adjusted for inflation offer limited charge as rates of return are still at the extreme end of a deflated average. 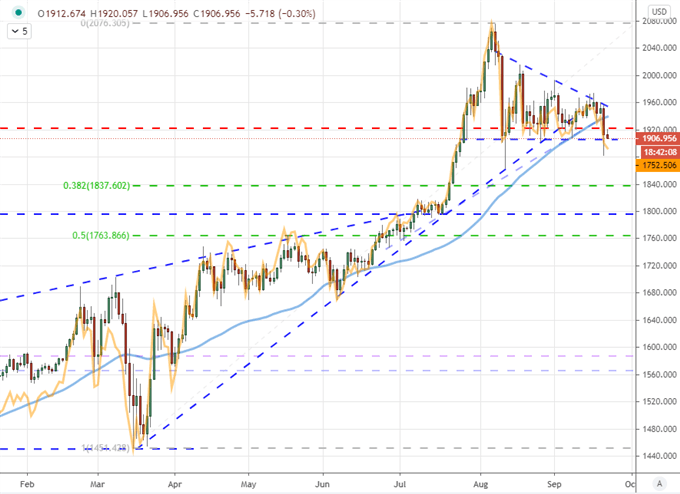 Sentiment is good enough a fundamental driver for the markets when significant markets swings are underway, but a tangible catalyst is still an undercurrent I look for when evaluating the potential of follow through. There are any number of systemic drivers market participants can latch on at the moment to justify their fears: divergent growth views, fear of a stimulus failure and political uncertainties are just a few such matters. Another headline seemed to be worthy of attention Monday as the resurgence of the coronavirus seemed to be a factor particular for areas previously absolved of the worst like Europe. 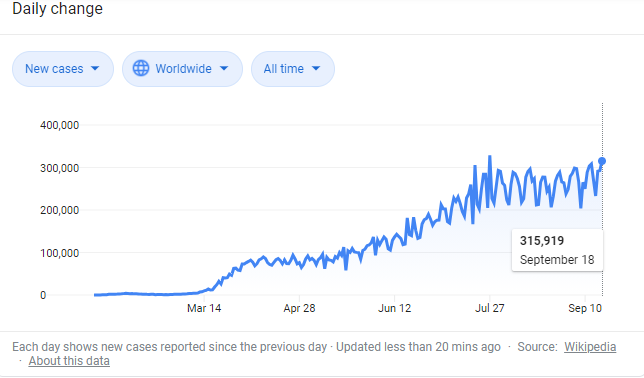 Another fundamental theme to keep track of moving forward is the tempo of the so-called ‘V-shaped’ recovery in the global economy. The September PMIs – timely proxies for official GDP figures – are due Tuesday evening, Wednesday morning. In such a suggestive state, disappointing figures carry disproportionately greater market potential than ‘better’ readings. Traders should remain vigilant. 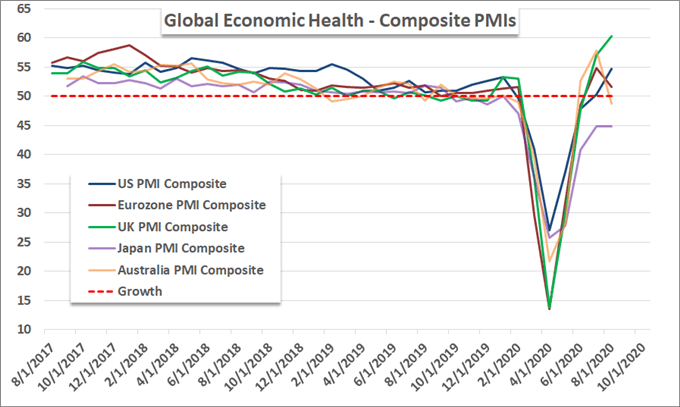