While there were a few risk benchmarks that were marking technical traction this past session (like the UK’s FTSE 100 index), there remains a notable absence of conviction from any of the major measures that I follow regularly. It is equally probably that his reticence is a function of a unfulfilled systemic motivation from matters like the V-shaped recovery, pandemic fight, monetary policy matters or trade wars as it is anticipation. There is a heavy speculation heading into Wednesday afternoon’s FOMC (Federal Open Market Committee) rate decision even if the prevailing forecast is little change off the previous meeting’s course. A fifth consecutive sessions’ gap to the upside for the S&P 500 suggests there is at least an effort to keep speculative appetite tipped higher. That said, will the backdrop and the probable scenarios for the world’s largest central bank allow for a critical break beyond 3,400 or below 3,300? While most are perhaps fixated on direction, my attention remains with the volatility necessary to spur the markets to a bigger move. 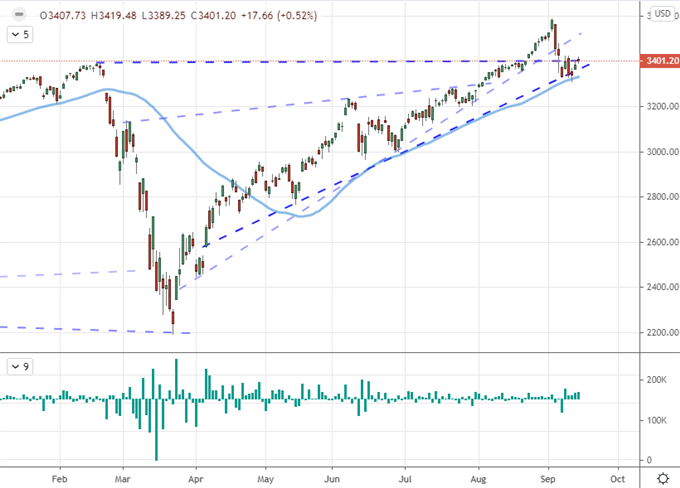 While my attention is particularly set upon the US indices, I am more broadly keeping tabs on the performance of ‘risk assets’ across the board. The best measure of conviction in my view is a strong correlation among otherwise unrelated assets that signify that speculative appetite is at the root of motivations. Recently, the cohesion in indecision has been remarkably high across the range of benchmarks I usually refer to when checking conviction, even though that consistency has manifested through congestion. If all of the following measures commit to a clear trend after the mid-week fundamental highlights, I will consider it a much stronger indication of speculative conviction. 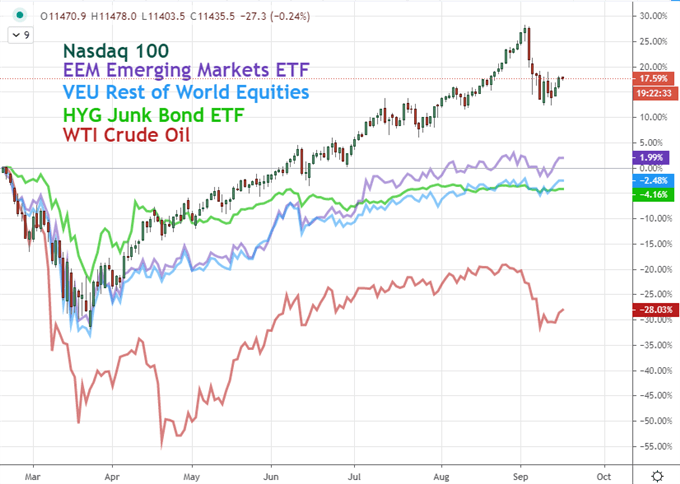 Without doubt, the top event risk on tap for Wednesday’s session is the Federal Reserve’s (FOMC) rate decision. According to the market, there is very little chance that the central bank will alter its policy course at this meeting, but that doesn’t diminish the market-moving impact of this gathering in the slightest. Anticipation is a powerful force in the market, and I believe it has exerted serious gravity in keeping the speculative benchmarks in place. That said, if the US policy authority offers up any surprises, the market will be particularly prone to upheaval. That is where the true potential lies. While the chance of a change in rates and stimulus program is very low, there is a real probability that the forecasts are updated as this is one of the quarterly meetings.

Learn more about the Federal Reserve and the other major central banks in our education section. 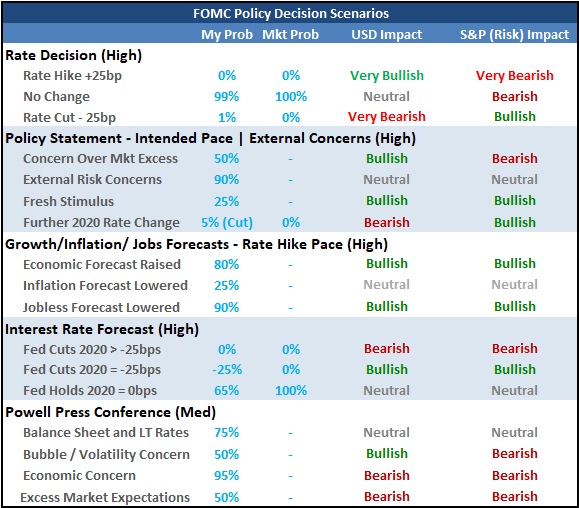 Looking back at the Fed’s previous forecasts in June, there was still a great degree of uncertainty to account for when it came to the forecast for 2020, 2021 and beyond. The forecast for growth through year’s end at this last update was a -6.5 percent GDP contraction and jobless rate of 9.3 percent. Over the past three months, there have been some favorable indicators that have heartily contributed to indulgent expectations of a sharp reversal in economic fortunes. And yet, the most timely figures leave room for concern. Which way will the Fed lean: enthusiasm that can be self-fulfilling or a more practical worry? 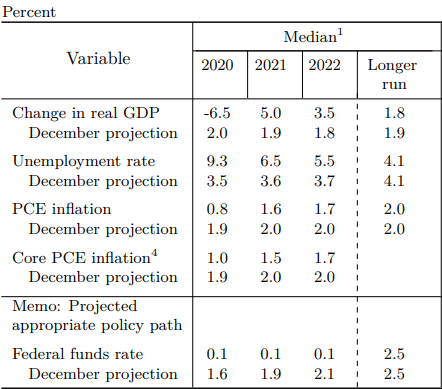 While the Fed rate decision is the most noteworthy event on tap Wednesday, it isn’t the only matter to keep tabs on. In fact, it isn’t the only monetary policy update scheduled for the day. Brazil’s central bank will weigh in on its course, but it is more likely that the Fed’s decision will carry more weight for the Real. The Bank of Japan will also update policy just hours after the Fed and that extreme dove is similarly anticipated to hold its extreme dovish course – though don’t write off a pre-emptive PM transition effort. Alternatively, the economic outlook is another fundamental matter to track. The OECD is due an interim economic forecast update. Not usually a market mover, recent conditions could position it for volatility at the right pitch. Meanwhile, data like US retail sales could play a more important fundamental role ultimately than the Fed in guiding timely expectations.

Chart of EURUSD with 50 and 200-Day Moving Averages (Daily) 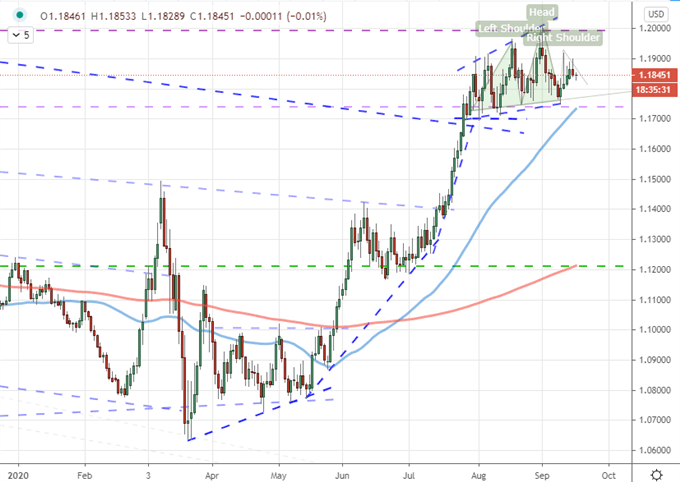 Trade wars is another theme that I will not lose sight of through the second half of this week. The World Trade Organization (WTO) ruled Tuesday that the United States’ heavy tariffs on China (approximately $200 billion worth of goods slapped with import taxes) was illegal. The Trump Administration is already calling into question its observance of WTO assessments, but this nevertheless adds weight to this fundamental issue. Further, USDCNH continued its slide this past session with an unmistakable acceleration. 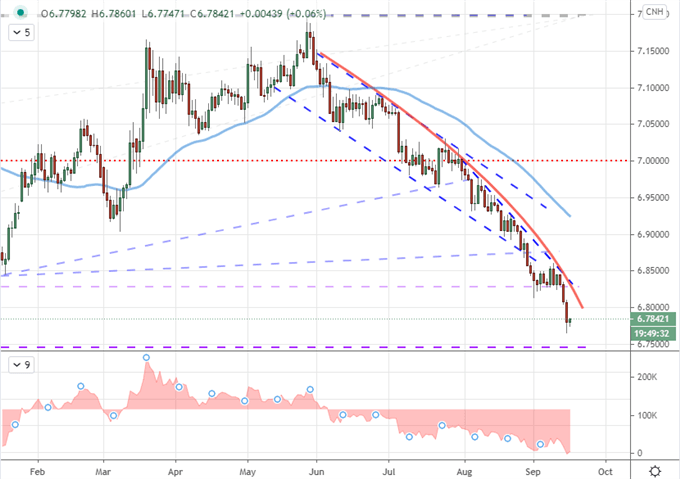 The other systemic trade matter at hand is the unrelenting dispute between the UK and the EU over post-Brexit relations. Prime Minister Boris Johnson has refused to backdown from the Internal Market Bill – especially after the House of Common’s supported the contentious amendment to the Withdrawal Agreement. European leaders have shown little appetite to allow their newly external trade partners the ability to alter terms mid-deal, but this is very much an open question for the Sterling and European markets. 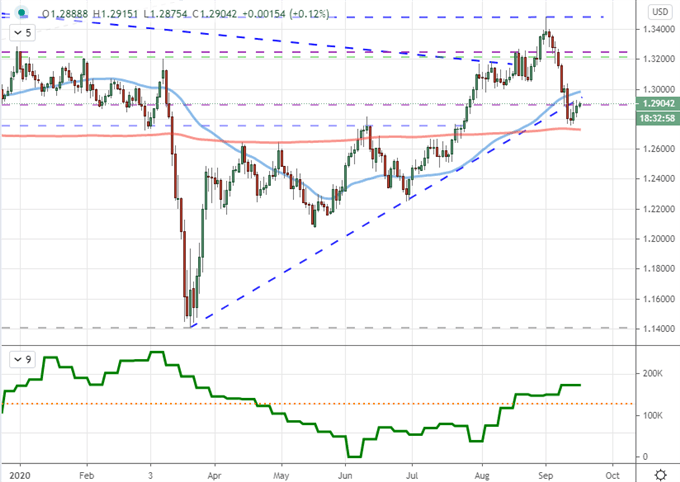