Dollar May Await Fed Before Leaning Into Trend, But USDCNH Is Actively Dropping

Speculative Appetite Opens Strong But Manages to Gain No Traction

Sentiment in the markets to start the week would once again give a different reading depending on what metric you were referencing. From the S&P 500 – one of my preferred, one-look yet imperfect measures of risk trends – Monday opened with the fourth consecutive session’s gap higher. A strong start is encouraging, but how much enthusiasm should we draw from that performance? Despite the series of strong starts, the index has generated little to no material traction. Through the end of last month, a long stretch of bullish gaps may not have generated big daily movements; but it nevertheless earned progress on a march of consecutive record highs. Volatility is an important factor in this turnover. While realized volatility (which I like to measure through the ATR) has eased somewhat, the markets remain prone to significant developments. 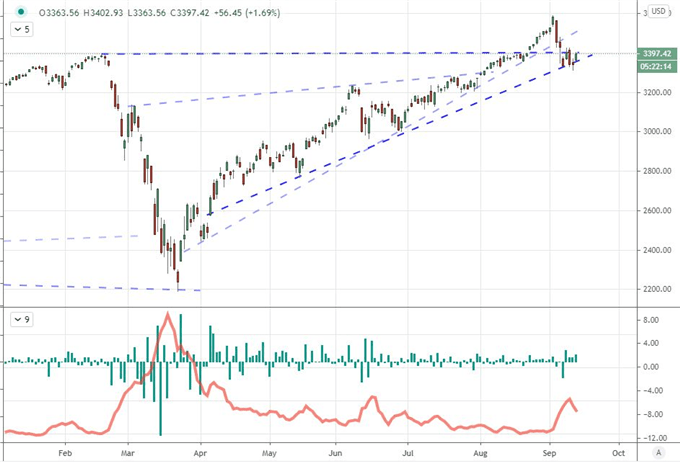 For many, the concept of course or direction matter more than anything else. Whether the market is facing higher or lower can set their expectations and prompt their market decisions. I am more concerned over the level of volatility and further the liquidity in the system. If volatility is high, it is an indication that a market can more readily change direction and accelerate from chop to trend with little warning. That is how this baseline concept truly manifests. With that said, measures of implied and realized activity remain high. Further, the favored measures of risk taking are showing signs of increased strain. I’m particularly interested in the markets that stand for the ‘buy high and sell higher’ momentum mentality in contrast to those typical measures that were favored for income (dividends, carry, yield, etc). There are few ratios I like to reference more than the close cousins of the S&P 500 and Dow which truly leverages the speculative momentum drive. The relationship was under pressure Monday, but I’m still waiting for that more critical breakdown. 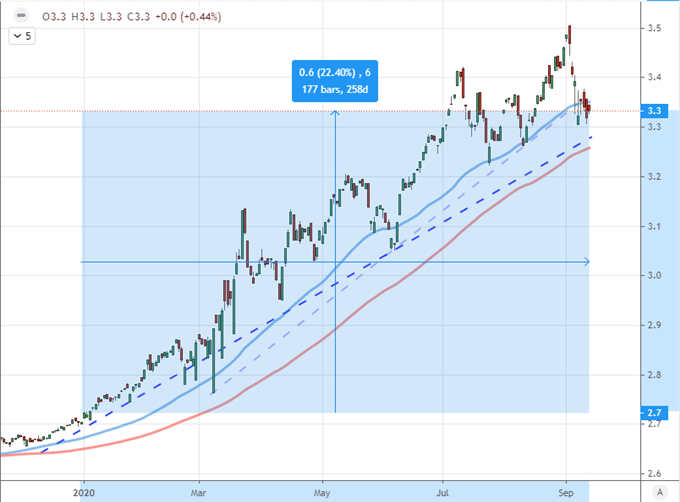 What Is Driving the Dollar?

When a market is a crossroads for so many different fundamental themes, it can befall a situation whereby there is inertia resulting from information overload. Having too many critical issues that are competing for our attention can in turn dampen all but the most prolific swells in otherwise critical matters for the financial system. The Greenback is in this category. Is the USD a safe haven and thereby faltering under the pressure of a passive risk appetite bid, could it be suffering for the multi-front trade wars the White House is pushing or perhaps it is simply following out a path of election polling. The Trump-Biden polling difference seems to be following the DXY Index. I think it likely that all these issues are contributing to the overall bearing – particularly the past month-and-a-half of indecision – but anticipation or Wednesday’s FOMC decision is likely carry top gravity for now. 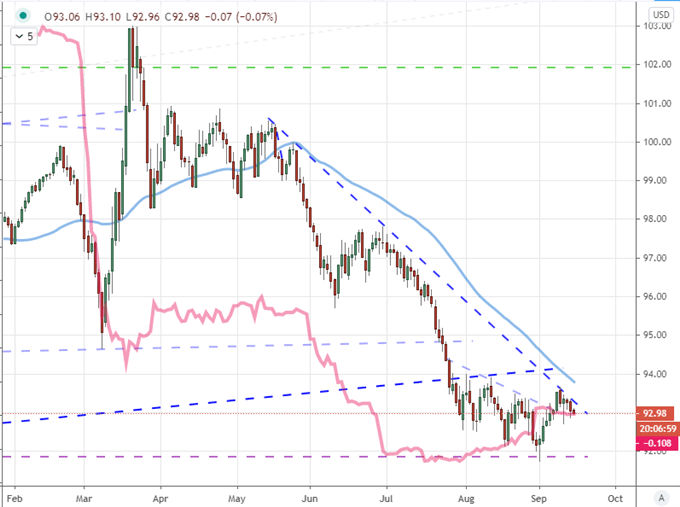 For a remarkable degree of momentum, the biggest Dollar move – and arguably one of the biggest of any markets – to start this week was from USDCNH. After 8 days of congestion that helped to pull the pair out of its dive temporarily, the cross reinstated its tumble Monday to trade at fresh 16-month lows. For technical traders, this would further clear the 38.2% Fib of the 2018-Record run and spot is trading the furthest below its 200-day moving average since April 2018 (before the general trade war bull trend kicked in). I believe that there is very much a trade consideration here that is intend to reflect on relative growth rather than actual relationship conflicts. Trade wars are no small matter and traders would do well to watch this pair. 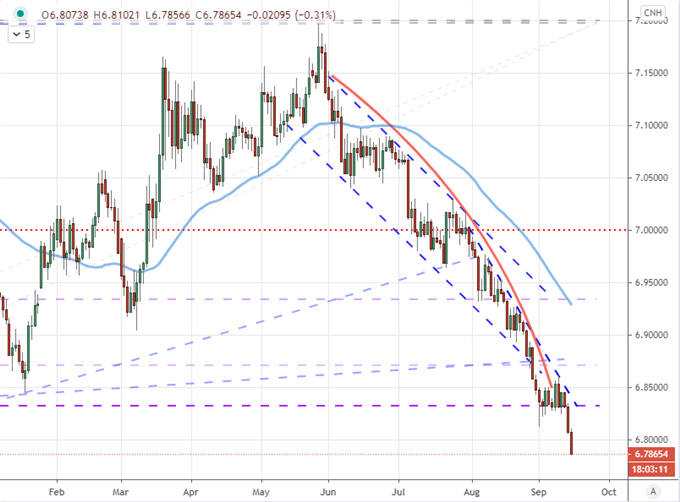 Other Fundamental Themes Prone to Near Term Volatility

While monetary policy is my top, scheduled threat watch for this week; there are other considerations that FX and global macro traders should monitor through the near term. The UK’s trade confrontation with the European Union remains a point of serious volatility. Following up on last week’s deteriorating trade discussions, the UK House of Commons voted Monday evening to move forward Prime Minister Boris Johnson’s contentious ‘internal market bill’ which he described as a “insurance policy” to allow changes to the withdrawal agreement made with the EU 27 in its divorce terms in case its partners decided to take an aggressive tack with them in the future.

Chart of GBPUSD with 50 and 100-Day Moving Averages (Daily) 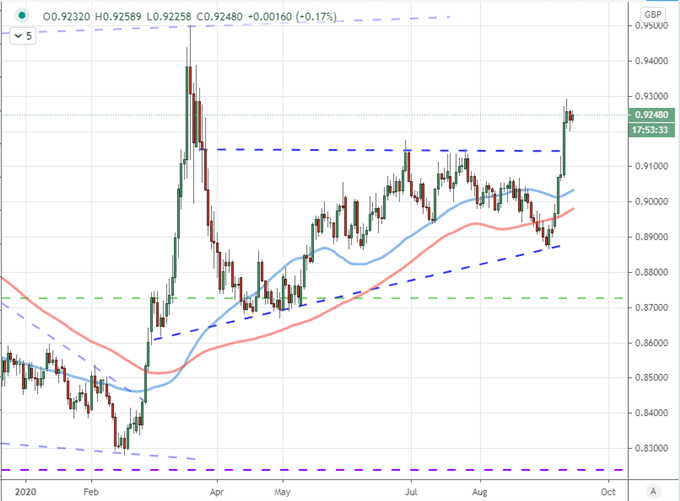 Another theme that lurks just behind the veil of civility is the threat of the global pandemic. The hope of a V-shaped economic recovery from the most intense onset recession since the Great Depression continues to pervade market levels even if participants to admit that they are being defaulting to such enthusiasm. And, a critical component to maintain this buoyancy is for the coronavirus impact to continue to fade in influence as a base case scenario – an economic charge likely needs more than just this fog lifted. That said, the worldwide new cases are still troublingly high with some countries that had suppressed the virus seeing a resurgence as they attempt to reopen (like the UK). Meanwhile, market participants confusing opportunism with altruism continue to trade in shares of companies attempting to create a tested and approved vaccine as soon as possible. 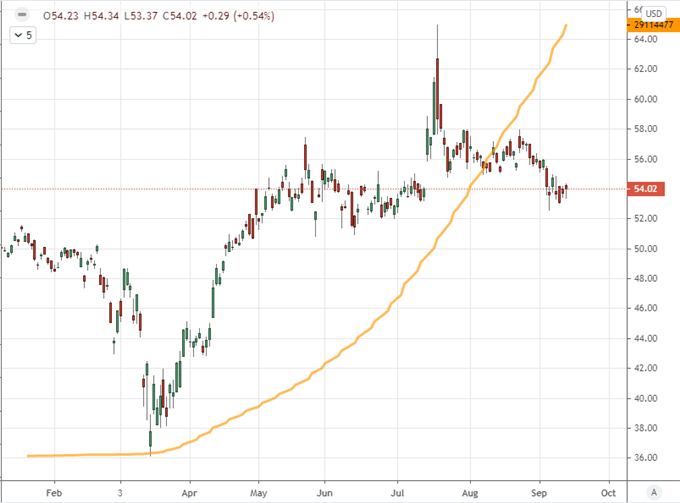