Conviction is difficult to come by nowadays. That shouldn’t be particularly surprising given the seasonal expectations built into the month of August; however, the markets are doing everything in their power to push speculators to question their conviction and complacency. Through the end of this past week, one of my preferred – and imperfect measures of risk appetite – the S&P 500 notched a record intraday and close high through Friday. Yet, that very technical milestone didn’t register as the kind of meaningful trend break that would make its way into a textbook for patterns. I would suggest that this past week has not resolved technical conviction, and the pressure is quickly coming to a head. Seasonal liquidity restraints would suggest the immediate environment ahead is likely to be a field of false breaks and congestion; but the overlapping and unresolved systemic risks can render a very different path what a convenient seasonal interpretation can promise. 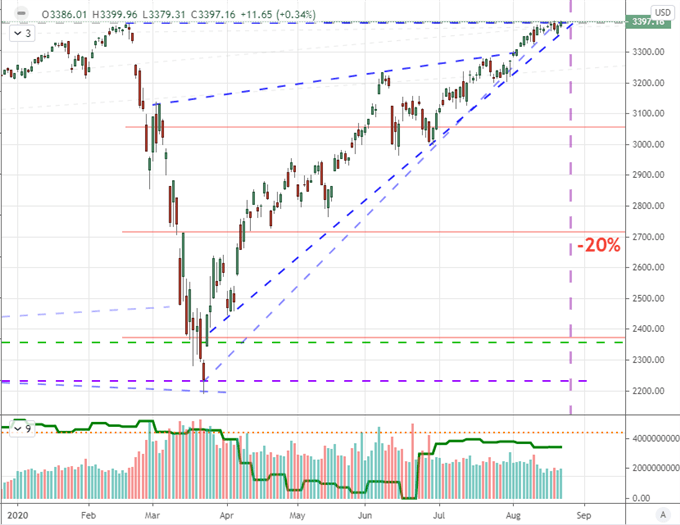 While we debate they day-to-day efforts to rouse speculators to action through the most restrictive of the year’s trading conditions, the big picture continues to reflect over-indulgence. Following the sharpest collapse from prevailing bull trend to clear bear market on recent record, we have seen an epic climb of comparable proportions. The five month rally from the benchmark US index is matches the same extreme tempo through periods in 2009 and 1998. Notably, those charges didn’t call the end of their respective bullish course…nor did they ramp up tempo to new highs. Will annual assumptions bear out once again or is ‘this time different’? 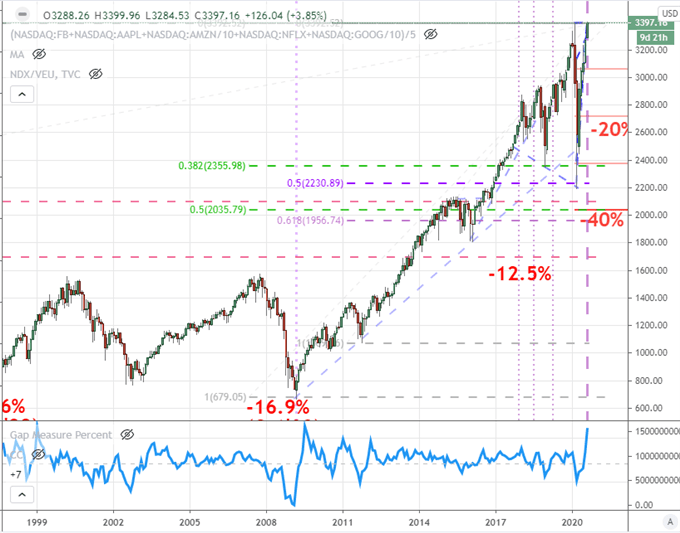 Questioning What Constitutes a Bubble

I do not take technicals at face value. They are an important guide for establishing personal responsibility with choosing specific levels for entry and exit but my interest in bearing rests more heavily in fundamentals while temp is systemically connected to market condition. For fundamental motivation, FOMO seems to retain an supernatural influence over the performance of the broader financial system. Factors like seemingly limitless stimulus and a heightened tolerance for risk among market participants seem to be building outright bubbles. I am particular partial to the speculative chase seen in the ratio of the Nasdaq to the S&P 500 or rest of world equities. Such a move seems to isolate the drive for preference in momentum above more tangible valuation factor. The same appetite can be read in Tesla’s incredible climb. In 2020, the auto-manufacturer has seen its shar price advance more than 380 percent. Its market cap is higher than that of Walmart. At what point does this constitute bubble? 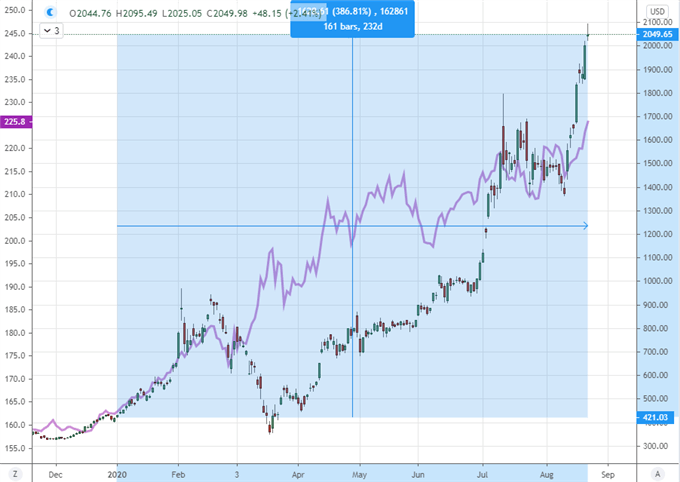 I put the question of a market bubble to social media. In the poll, I released, it was mentioned that simple recognition of a bubble doesn’t mean that the excess is due for immediate collapse. External factors and unquestioned risk appetite can fuel the swell far longer than many may consider reasonable. Nevertheless, the ‘wisdom of the crowd’ prevails. Bull trends inevitably flag, but 43 percent of those that participated in my poll thought this collapse would come in 2020. A meaningful 22 percent though the market would not have to pay its dues until 2022 or beyond. That is overly optimistic in my view, but sentiment can be resilient to change.

Twitter Poll: Is the Global Market In a Bubble and When Will It End? 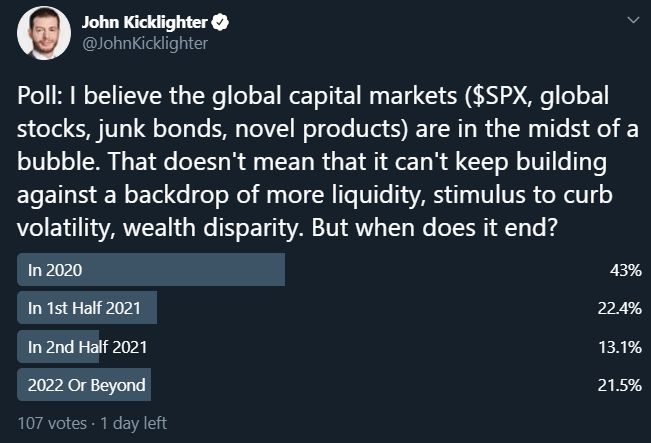 Looking out over the coming week, my default expectation is for market restraint. While there are numerous systemically-important fundamental issues competing for attention and command of the markets, There remain few shocking areas of the system thus far that would urge investors to wholesale change. Through the end of this past week, global economic health was dealt a modest blow with the drop in Australian, Japanese and Eurozone GDP forecasts from the data. Given the throttling of more timely data these past weeks, it seems that the risk to a ‘V-shaped’ recovery is far more pressing than the default ‘risk-on’ of late would insinuate. That said, the real question is whether value and price will resolve this discrepancy during a market drain or after the ranks fill out? 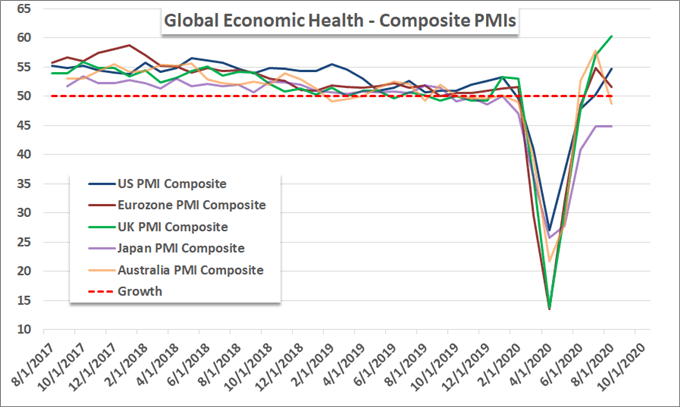 A universal risk perspective drawn from the S&P 500’s claw higher and the disappointing liquidity backdrop makes for an uneven backdrop for those seeking a clear bead on risk trends. That said, the relative value founded in regions and currencies remains fair game for event risk. EURUSD for example this past week attempted breakout of weeks-long congestion after a critical bullish break only to fall back to range. Market depth very likely plays a roll in this failed drive, but a full commitment to risk trends isn’t the full impact of further event risk. Consider the relative performance shift between the Eurozone and US PMIs. Is this the foundation for a sustained drop for the benchmark cross below 1.1700. What more lies ahead for this and other key pairs and asset? 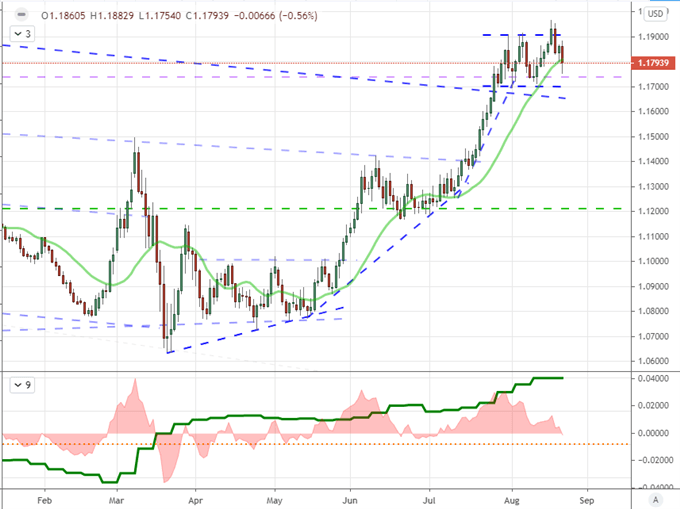 This has becoming a routine understanding for ill-earning confidence, but stimulus has played an enormous role in capital market. Below, we can see the scale of major central banks’ balance sheet (Fed, ECB, BOJ, BOE and PBOC) relative to one of my preferred risk barometers. Perhaps teasing liquidity trends modestly still earns a quiet bid but there is an important accelerant to consider next week in the Jackson Hole Symposium due over August 27th ad 28th. Given their topic is extraordinary stimulus is more extraordinary conditions it would due to watch this gathering’s discussion in such unusual times. 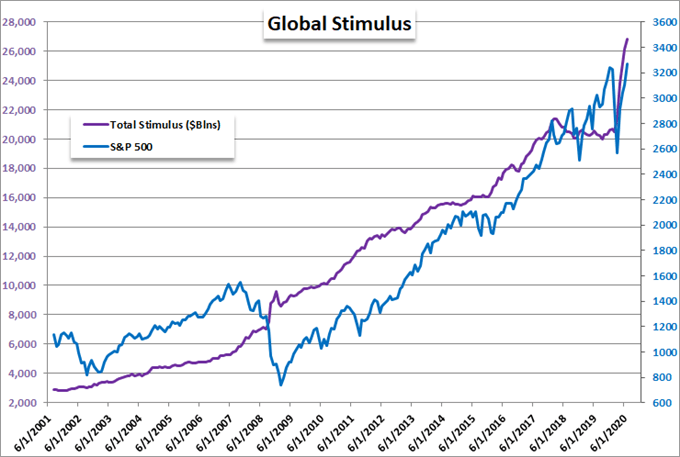