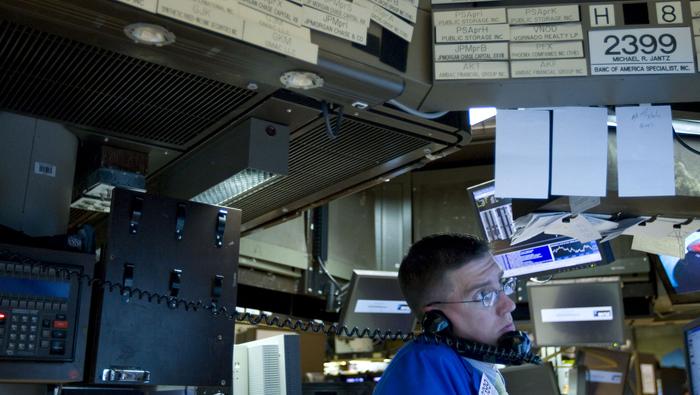 Are EURUSD and S&P 500 Corrections a Full Reversal Signal a Day After Breakout?

Not a day after posting the technical progress necessary to qualify for technical breakouts, both the S&P 500 and EURUSD seemed to tip back into a reversal. Naturally, this abrupt directional change has more than a few eager market participants fretting that a systemic reversal has set in; but I maintain concern that the most remarkable matter is the shallow degree of conviction that continues to plague the market as a reflection of ‘summer’ liquidity. Looking to the US equity index, the slide through Wednesday seemed to generate the same degree of speculative surprise as the nominal record high earned the day before. Through it all, the medium term (2 week) ATR continues to signal remarkable restriction in activity. ‘Fear’ does historically pose a greater volatility threat than ‘greed’, but we are still some ways from signaling a market that is overriding its circumstances. 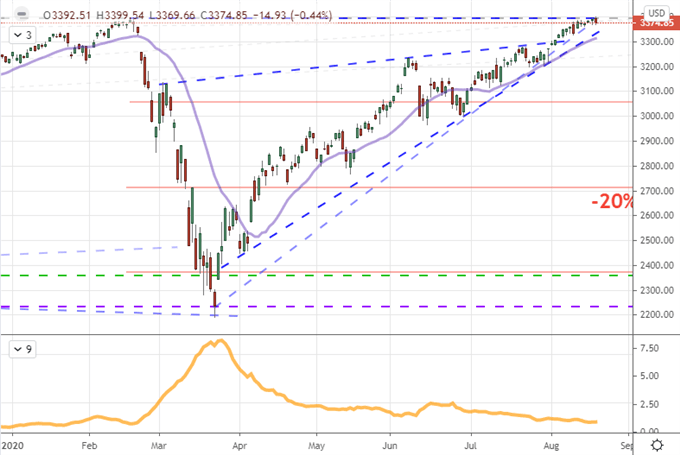 Outside of the S&P 500, the most recent measures of speculative charge present a clear reticence to throw weight behind unwinding or build up. From the more concentrated risk milestones, the tech-heavy FAANG and Nasdaq were in modest retreat this past session. More broadly, the breadth of speculative performance was seriously underperforming. With DAX, FTSE 100 and the Nikkei 225 slipping; the ‘rest of world’ VEU ETF was leaning back towards the floor of its rising wedge. The EEM Emerging Market ETF technically nudged its own trendline support. Carry trade in the FX column was also rousing dubious reversal threats with pairs like AUDJPY eyeing wedge/triangle support. 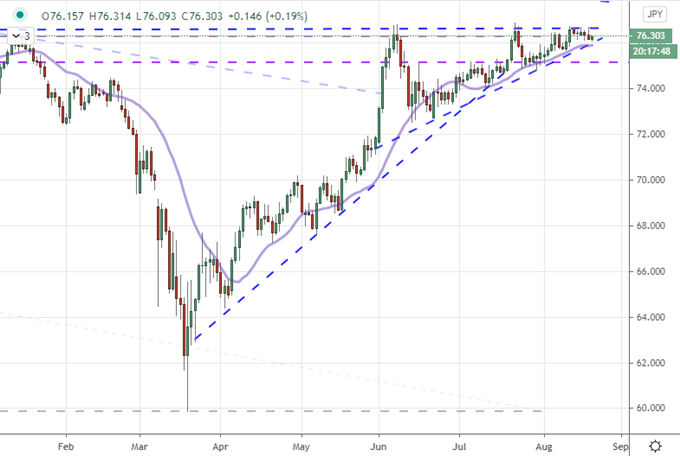 If a Dollar Breakout Can Fall Apart, Don’t Throw Too Much Confidence in Reversal

Where the benchmark US index was posing only a paper breakout and superficial reversal against that move, the Greenback urged a more impressive breakdown and then rebound. The scale of the DXY Dollar Index was certainly more impressive Tuesday and Wednesday, but the same shallow conviction haunts this benchmark currency. Just a day after slipping 92.50 and trading to a more-than-two-year low, the Dollar posted its biggest single-day rally sine June 11th to move back into the previous three-week range. While that may be a more impressive statistics in historical terms, this doesn’t pose much more confidence for intent than what the risk measures present. 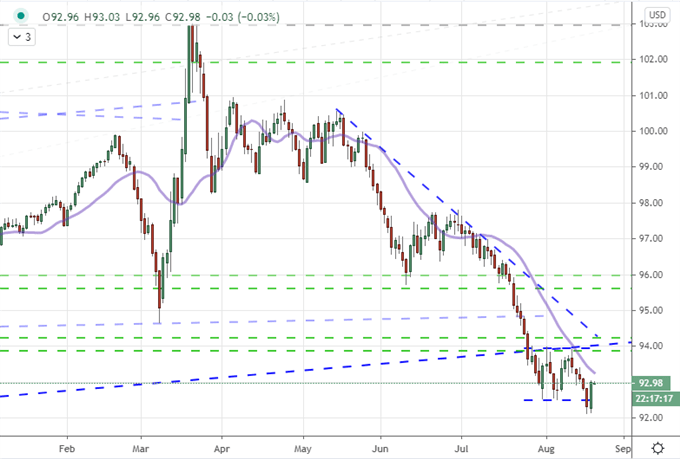 As it happens, I asked in a poll whether traders believed the EURUSD’s break – as a proxy for the US Dollar – was indicative of the currency’s (USD) systemic slide. Interestingly enough, the majority of those that had participated when I did this update (79 percent) believe that the pair is either going to commit to a near term surge or collapse. The split on direction matters less to me than the assumption that commitment and momentum is at hand when general conditions continue to reflect thinned liquidity between seasonal and structural restriction. Perhaps it was the presence of major event risk that urged traders to vote for greater activity than was practical – though I would hardly call the FOMC minutes redefining event risk. 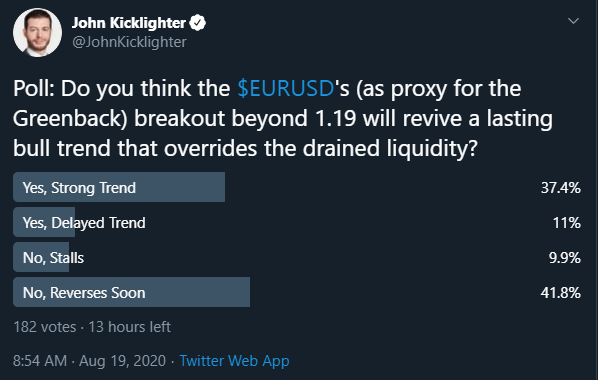 This past session, it seemed fairly clear that some measure of volatility followed in the wake of the transcript from last month’s FOMC rate decision. The group decided to make no changes to its policy mix, but it would downgrade its expectations for a sharp recovery in the second half. I maintain that the economic outlook for a country helps create a strategic advantage/disadvantage for the currencies and local capital markets, so then why would the Dollar rally after that news? I don’t think it was a material reflection of the USD’s safe haven status – it still represents a more extreme haven. Rather, it seems that the curb on anticipation of more extreme measures like yield curve control policies has eased concern of a deflated reserve status. Monetary policy has been saddled with the perspective of being ineffective some time ago, but fiscal support – the absence of which factored into their growth outlook – can still move the ‘V-shaped’ needle. 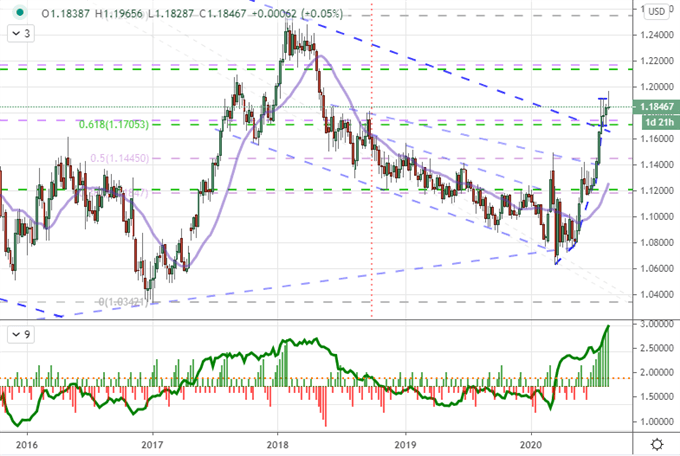 Other Areas of Targeted Volatility

While the status of liquidity and the bearing of risk appetite remain my prevailing concern for their perspective on what the markets are capable of exacting, there are some interesting targeted flare ups in other areas of the market. Trade wars for example continue to offer an important pressure with USDCNH and the Shanghai Composite stabilizing after President Trump offered troubling perspective on the status of US-China relations. Another impressive performance would arise from gold which suffered its second most intense single-day loss since June 2013. As far as escape velocity goes, that would seem to override the gravity of holiday conditions. I remain unconvinced. However, for those that believe the metal’s drop was just a side effect of the Dollar, an equally-weighted index of the commodity – priced in Dollar, Euro, Pound and Yen – showed much the same drop. 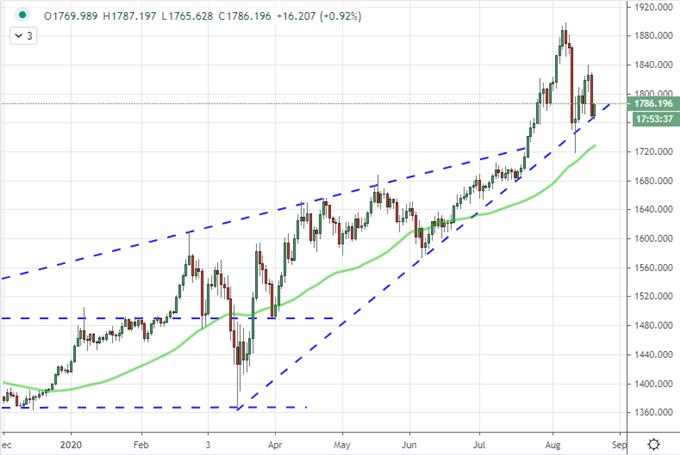 Another atypical area of activity to note this past session is one that seems to cater to liquidity well. EURCHF managed to urge a sharp move higher that fell outside event risk. The Swiss National Bank (SNB) has a clear mandate to try and ease the Swiss currency to support the country’s economic trade. Are they perhaps taking advantage of shallow markets to urge speculative shift? Ahead, I will monitor event risk from Canada such as the ADP payrolls, the UK sentiment surveys (CBI and GfK) and anticipation for Friday’s August PMIs. Be mindful. 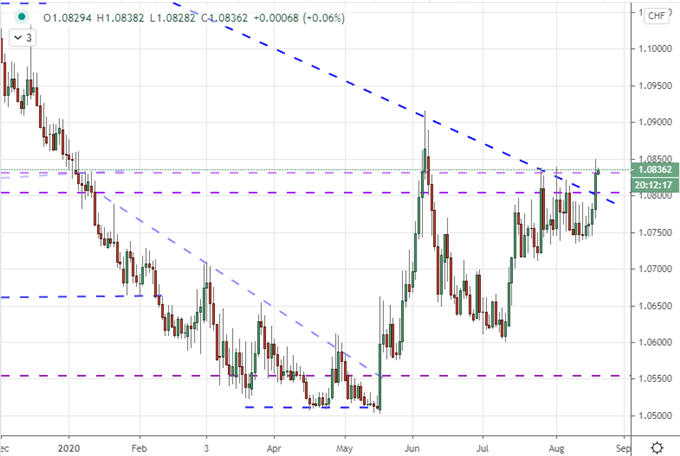