We are passing through the height of the summer lull for the global capital markets, and even the default speculative drive that has founded a seemingly unstoppable FOMO bid over the past decade is struggling to overtake high profile milestones. Extending an ignominious trend from last week, the S&P 500 once again waved an ‘easy’ skate to record highs to trade in a remarkably tight trading range. In fact, with Monday’s and Friday’s range falling within the previous day’s full span, the five-day historical range for the benchmark US index cuts the smallest trading span since February 20th. That might not seem extreme in historical terms, but that period references a time before the pandemic brought about a severe recession, rehydrated trade wars and brought attention to the limits of monetary policy. 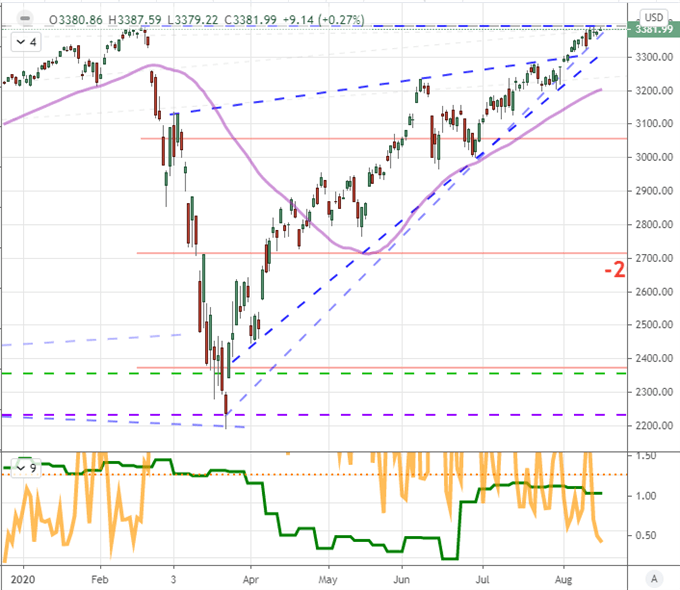 While the broad US index has held to a remarkably tight trading pattern, it is still highly likely that a near-term break is in the cards. What is important, however, is establishing whether a break can reasonably lead to follow through. I think that is highly improbable given the backdrop of market conditions. It remains the case that liquidity in August is seasonally at its trough; but further than that, lack of resolution on multiple competing themes makes for a troubled environment in which to cut a trend. To override inertia, a serious fundamental surprise is what I’m keeping tabs on. To support a bullish break with follow through, one of the few outlets is news of a vaccine. President Trump remarked Monday that those working on a vaccine were “very close” to relief that could reopen the economy.

Chart of Google News Search Interest for ‘Election’, ‘Covid’ and ‘Economy’ in the US 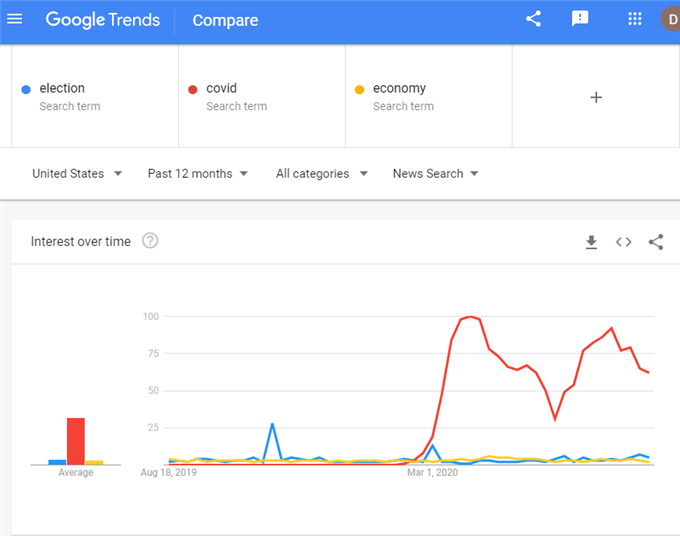 Dollar Continues to Carve Some of the Most Technically-Observant Ranges

According to Google’s search data, interest (or fear) around the pandemic remains the most heavily researched considerations among significant fundamental themes. That is not surprising as the contagion has not-so unclear knock on effects for economic trouble, trade wars and even election outcomes in the US. That said, this leading spark does not lend itself well to a clear and decisive bullish or bearish shift. In an environment where seasonal and systemic restriction are acting against trends, that can operate to maintain congestion where it is proliferates naturally. The Dollar is carving out such a productive range. The DXY Dollar Index is traversing between 94 and 92.50 with ready hesitation to make any provocative breaks. A short-term clearance is still a tangible probability, but I would seriously doubt follow through if it were to come to pass short of an overt fundamental drive. 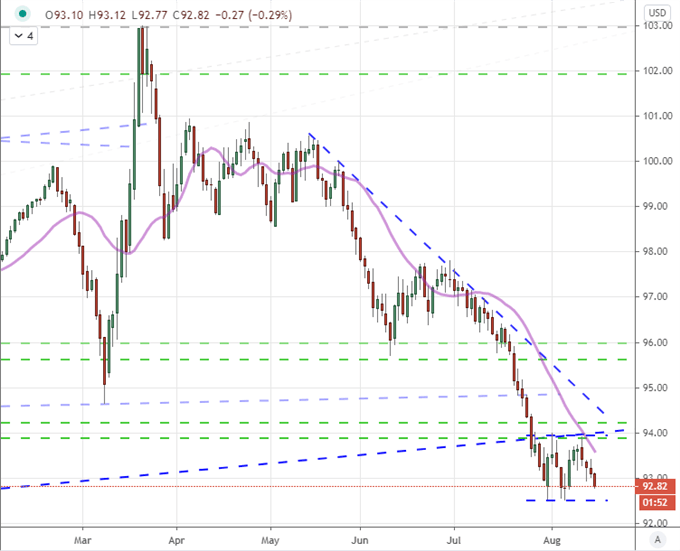 While the outlook for the coronavirus, the US (and global) recession, trade war blowback, election uncertainties and other complex issues can eventually push the Greenback from its set boundaries; the impetus for resolution is not particularly tangible. The theme that is more suited to sudden developments on my radar is the eventual compromise on a US stimulus program. While it may be something that the market rank intuitively expects, there is perhaps still a factor of ‘relief rally’ here. I don’t think it will lift something like the S&P 500 much further given it trades at few measures of discount, but the Dollar’s rough three month performance could spur a swing in EURUSD back to 1.1700 and perhaps even a break bank into its wider range. 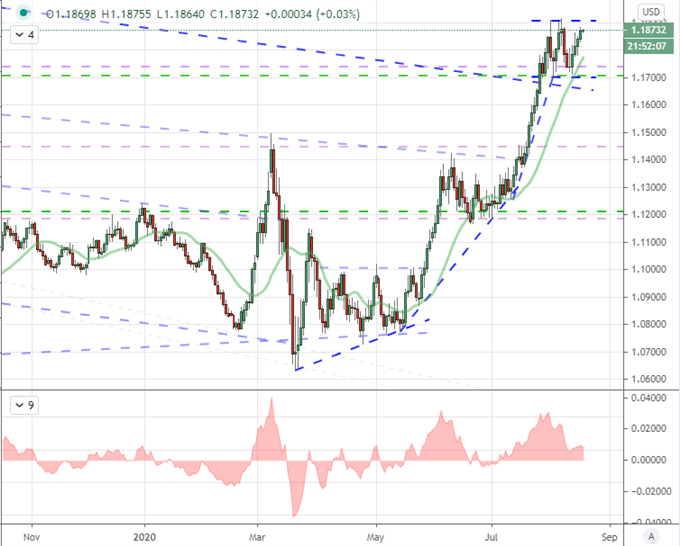 Where the Real Fundamentals are Hitting

While much of the fundamental threat assessment radar that I’m watching is still in the theoretically sphere, there are meaningful fundamentals that are unfolding here and now. These developments are offering inconsistent results for breadth and lasting market impact. From the past session, the biggest move on my register was China’s Shanghai Composite which rallied far more aggressively than global counterparts. News of the PBOC essentially extending another 700 billion yuan (approximately $100 billion) in stimulus helped rally capital markets but also remind us that these infusions are key sparks for the markets – even if USDCNH was wouldn’t be able to pass its next technical milestone after breaking a multi-year trendline support. 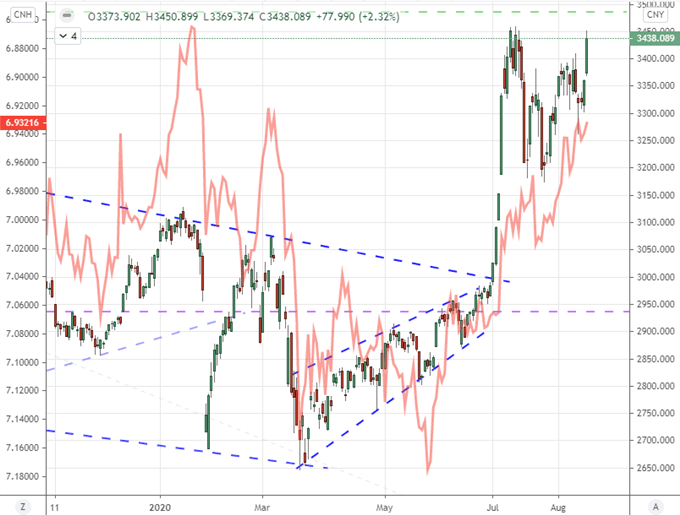 Elsewhere, more traditional data seems to be finding little-to-no market traction. June capital flows (TIC) figures from the US and Canada led to virtually no market reaction, nor would the NAHB US housing market indicator hitting a record high or the Bundesbank’s optimistic outlook for a 3Q German recovery generate much heat. One of the most over listings was the Japanese 2Q GDP which posted its worst contraction on records (back to only 1980) while the Nikkei 225 was little moved right alongside an equally-weighted Yen index. 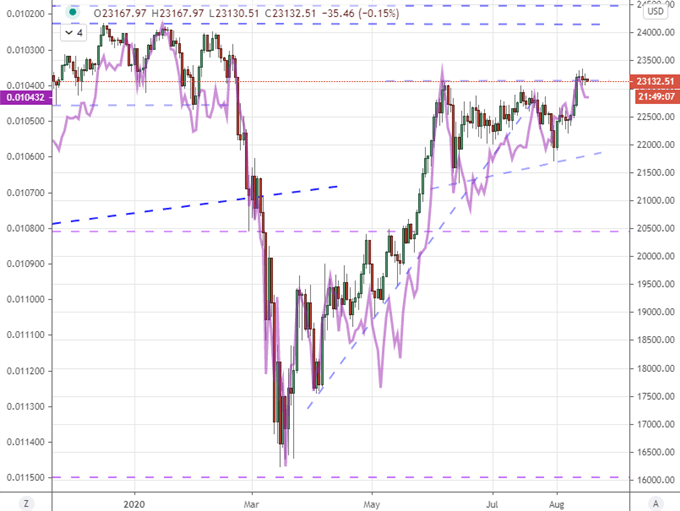