Was there a prevailing wind in broader risk appetite to start this week or was the default bearing in speculative interest simply building upon a seasonal preference? This new week brings with it profound concerns around the lingering recession, renewed pressure in trade wars and an unmistakable concern over electric risks in the United States. And yet, we are also seeing the weight of the ‘summer doldrums’ in price action. The advance from my principal and imperfect measure of broad risk appetite, the S&P 500, advanced for a 7th consecutive session through Monday. That would edge us towards the record high set back in February 19 but it would so little-to-nothing to change the sense of the tempo behind the market. It is impressive that this benchmark is so close to a principal technical milestone yet is drawing out so little enthusiasm from the speculative rank. 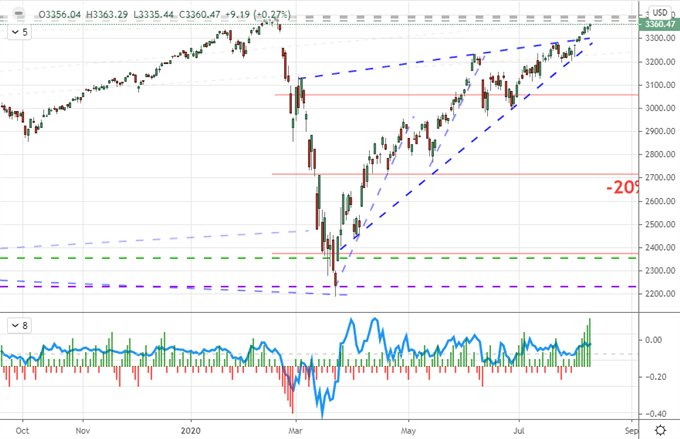 Giving due credit to the typical seasonal lull, August represents one of the most restrained calendar of the months when it comes to turnover and pace. On a trading-day adjusted basis, the volume for the S&P 500 is historically the most tempered through this month, even compared to December. As for the VIX volatility index, activity does pick up from the June trough through this period; but that implied activity doesn’t override inertia founded in liquidity. It is worth mentioning that the CBOE launched the VIX mini futures contract this past session to generally good volume. Anticipation of quiet will continue to draw on the markets, but it is important to remember the numerous unresolved issues still disrupting the normal operation of the markets.

Chart of Monthly Performance in S&P 500, Volume and VIX 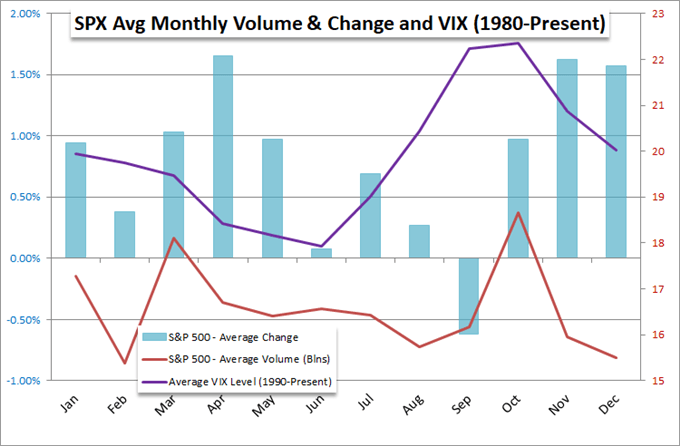 A conflict against quiet of the bullish persuasion was the push of stimulus to open this new trading week. From the US, the news over the weekend that President Trump had pushed through executive orders to compensate for a lack of compromise in Congress on a second round of stimulus could have readily fostered risk appetite should the markets be in a genuine position to take advantage. However, the $400 per week additional unemployment benefits (with strings attached like partial State coverage), a payroll tax holiday, eviction delay and student loan payment pause combination did little to rouse risk taking. Even the emerging markets (below EEM ETF) showed little charge despite its historical sensitive to the US accommodation. 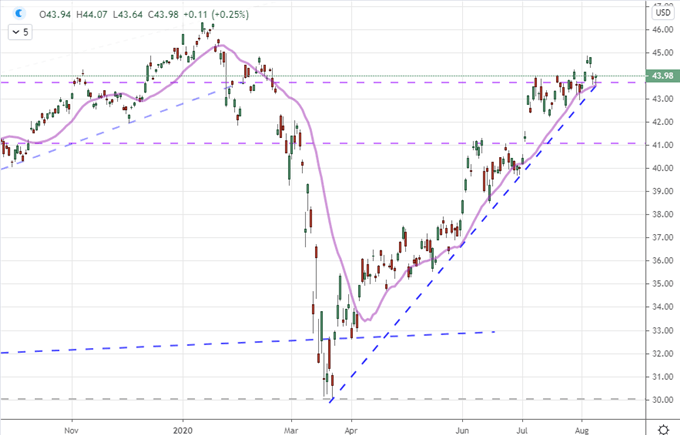 On the opposite end of the spectrum for risk influence, trade wars seemed to prompt just as little motivation in relevant markets. China announced over the weekend response to the United States’s move to sanction Hong Kong’s Chief Executive for crackdowns on democratic rights in the special administration. Yet, USDHKD wouldn’t shift from the bottom of its tolerance band nor would USDCNH make a decisive move from 6.7500. While there may be no resolution for risk interest on this front, this remains a key theme for speculative interests moving forward.

Chart of USDCNH and a 20-Day Moving Average (Daily) 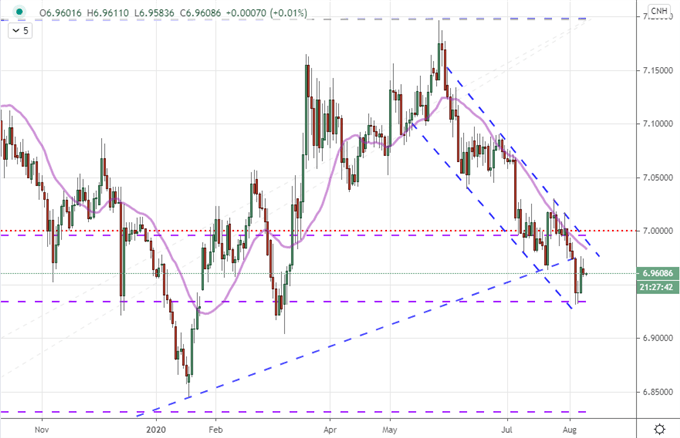 What Dollar Cross Holds the Most Potency

Should historical norms manage to override the many seismic issues that continue to afflict these markets, conditions of restrained liquidity, restricted influence for fundamental reference and closer observation of technical boundaries will reinforce circumstances supporting range. I think there is still serious pressure to see us fulfill the saying ‘this time is different’; but in the event that norms win out, I asked traders in social media what their favorite Dollar-based pairs would be to exploit range trading. I chose this currency in particular because until very recently, it seemed to be defying the restraints on market conviction.

Poll: What Dollar Based Major Is Best Suited to Range? 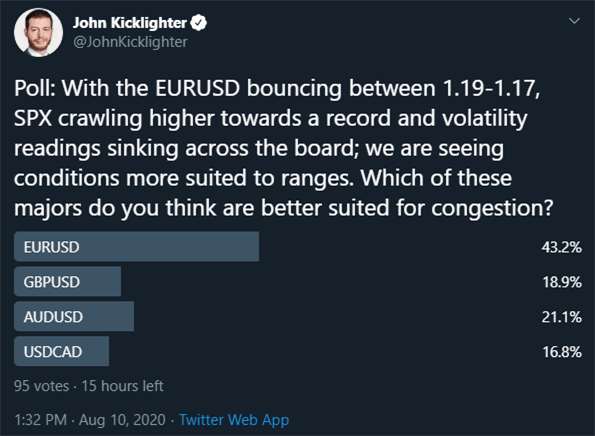 The favorite choice in my poll for holding technical bounds was the EURUSD. This most liquid of crosses has established a pattern between 1.1900 and 1.1700 which find much greater weight in the floor as a reinforced ‘former resistance as new support’. Perhaps it is that density of the lower threshold that draws out confidence in the range as it is was the broken barrier to a 12-year trend channel. With Euro-area investor sentiment (ZEW) and US small business confidence figures on tap tomorrow, these measures are unlikely to stir an effort to upend restraint on their merits alone.

Chart of EURUSD with 20-Day Moving Average and COT (Daily) 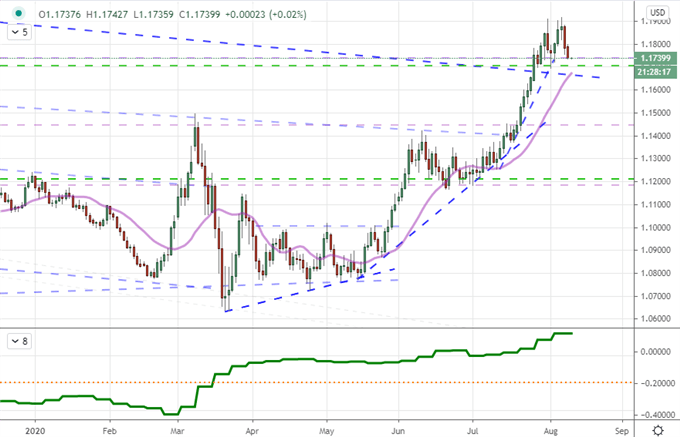 For some other Dollar-based majors, there are the requisite technical barriers and questionable fundamental backdrop to make for uneven potential. For example, AUDUSD is staging a very narrow range in its remarkably consistent rising channel and USDCAD has proven itself remarkably steadfast in its default to congestion. However, there is even more of an anchor to keep to boundaries for the likes of NZDUSD and GBPUSD. The technical measures are impressive enough, but the anticipation of the RBNZ rate decision and 2Q UK GDP figures respectively will undercut any errant efforts at fostering a strong charge one way or the other. 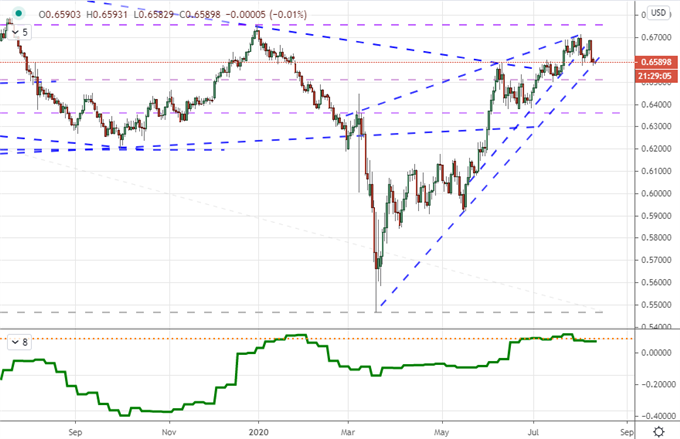