Are traders starting to come out of their speculative coma, ready to dive back into the waylaid complacent drive of previous years? Referring to the S&P 500 as my prominent risk benchmark, the index did advance for a fifth consecutive session – matching the longest series of gains for the index in 18 months. Furthermore, the market closed less than 1.5 percent of the record high set back in February. Those factors alone could inspire some bears, but context in market conditions and fundamentals leaves much to be desired. The tempo alone for this index is underwhelming, other risk assets are far from comparable highs that could develop self-sustaining momentum and the scale of skepticism over market enthusiasm (versus economic struggle) has hit impressive levels. While we may soon see a record high for SPX, I remain dubious how fast and far it would climb after the hurdle were crossed. 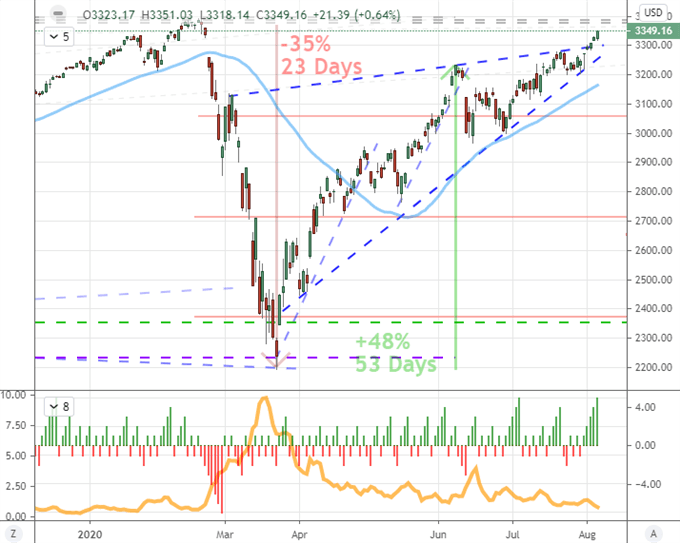 Though Stimulus and Vaccine are Top Interests, NFPs will Offer a Timely Release

Complacency (assumed low risk due to external support driving investors to take greater risk exposure) has proven a remarkably powerful force over the past five-to-seven years in particular. However, the threats to stability have multiplied while the risk through record-high capital markets lurks as its own collapse risk. To overcome this building gravity, a tangible fundamental charge would work best to provide the combination of optimism and surprise. That said, the two most loaded scenarios are anticipation of a second wave of US fiscal stimulus and approval of a vaccine to the coronavirus. While the markets could certainly be urged higher should these developments come to pass, assuming the market isn’t pricing their favorable outcome when a benchmark like the S&P 500 is at a record high seems preposterous.

Chart of Change in US Nonfarm Payrolls (Weekly)

There is plenty of traders and media attention trained on Congress and the announcements from pharmaceuticals, so it is unlikely we will miss either of these eventualities. That said, there is limited value in setting up plans for something without even a loose timeline, especially when it is prone to a ‘buy the rumor, sell the news’ treatment. Today’s top event risk, the July nonfarm payrolls (NFPs), may not carry the same scale of influence, but it is at least supported by a specific time and date for release. After the sharp disappointment in private payrolls growth for the month reported by ADP (167,000 versus 1.5 million forecasted), investors will be on high alert for signs that the ‘V-shaped’ recovery effort is already floundering. And few measures can make such a clear statement to that effect as a jobless rate holding at 11.1 percent.

Chart of Total US Employment (Monthly)

Which Dollar Pairs Are Most Prone to NFP-Induced Volatility?

While capital market leaders have an underlying bullish bias that seems to defy the fundamental travails in place, the US Dollar seems to exhibit the opposite situation. Considering Gold is soaring and other traditional havens are generally level, I wouldn’t suggest that these are simply opposite ends of the same risk theme. Instead, the currency seems to be suffering more for its relative disadvantage than the seemingly global representation of speculative appetite that US indices have adopted. While the country’s struggle with pandemic cases, securing a second round of stimulus and political uncertainty are high level concerns; the tangible evidence for or against a sharp recovery could draw active interest.

Twitter Poll: ‘What Do You Think is Driving the Dollar?’ 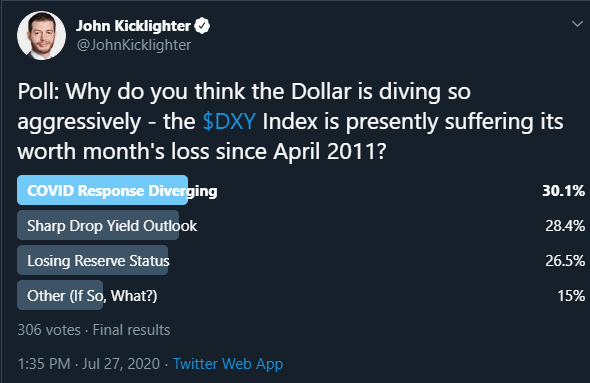 In evaluating the different majors, there are a few groups into which I would categorize the pairs. Aside from the listless USDJPY and many of the EM crosses, there are those crosses that have already earned the break and seeking follow conformation of follow through or possible failure into reversal. Alternatively, there are those pairs that have yet to throw in with a tentative break. AUDUSD was the most recent break having crossed 0.7200, but EURUSD’s clearance of a 12-year channel resistance has had time to build indecision between 1.1900 and 1.1700. This range may ultimately prove more navigable in the week’s fading hours than starting the ball rolling on a wholesale break. 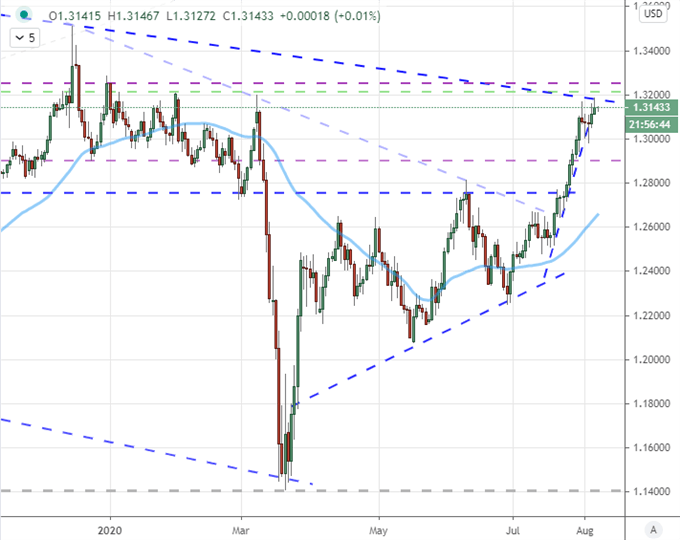 In contrast, GBPUSD has yet to make a bid for 1.3200 despite the Bank of England ratcheting back its dire economic forecast (moderately). A break lower – in favor of the Dollar – looks more like the path of least resistance technically, but there is nothing to ensure the Dollar will find its prompt for a rally. USDCAD is arguably the most loaded Dollar-based major for volatility potential. In addition to the US NFPs, Canada will be releasing its own employment statistics and manufacturing activity report. 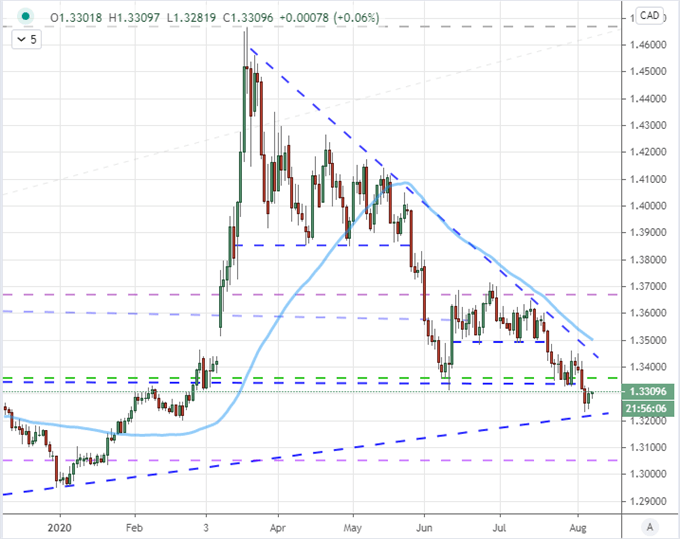