Why is the Dollar On Pace for Its Worst Month in 9 Years and a Key Breakdown?

The Dollar is Suffering Its Worst Slide in Nearly a Decade

Risk trends have opened this new trading week with the level of indecision one would expect between a backdrop of seasonal restraint associated with this time of year and the heavy anticipation deserved with such a burdened economic calendar from Wednesday on. However, not all market benchmarks are exhibiting the wait-and-see attitude we have found through so many standards. The US Dollar for example seems to be fully committing to the fundamental headwinds that have drawn so much scrutiny over recent weeks. To understand the situation, consider the DXY Dollar Index. The benchmark Dollar index is extended its slide Monday to a seventh consecutive session (on the close) with a noteworthy break below 94. There is serious weight to this progress. 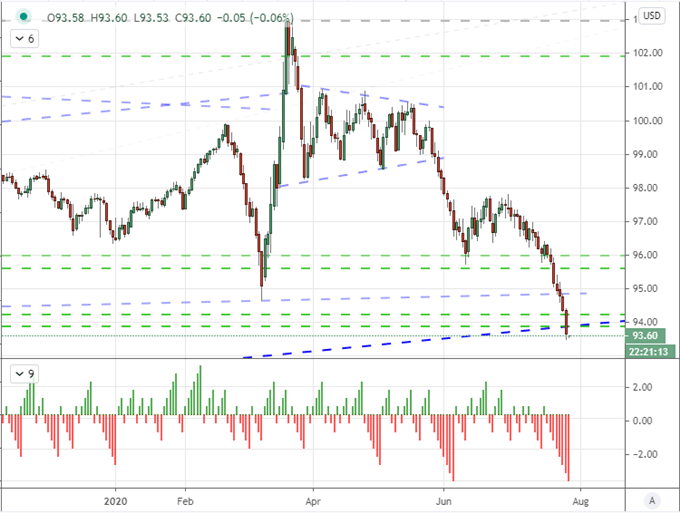 To fully appreciate the technical development at hand, we need to adjust the Dollar’s framing to a weekly or monthly chart. For the lower of those two time frames, we find the benchmark is working on its sixth consecutive week of retreat – a present tie to the longest decline since 2010. The Daily chart offers up very similar historical circumstance. The 7th day consecutive drop is the second worst bout of USD retreat since April 2011. Not only is the consistency a matter of concern, but it is unfolding at the moment that we happen to be dropping through serious technical support. The overlap of multiple high-level Fib levels and a channel support 9 years in the making means there are a lot of potential market participants that are paying attention to the progress and altering their views – a technical and speculative breakdown risk. 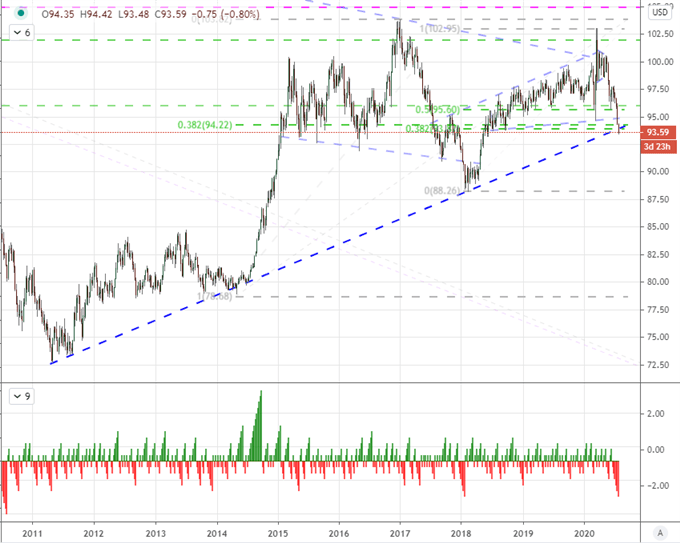 While many may explain the DXY’s breakdown as a byproduct of a single currency cross – EURUSD accounts for nearly two-third of the index – there are more critical measures to confirm the Dollar’s pain. Consider GBPUSD which has advanced despite the Sterling’s own struggles with the lack of progress on post-Brexit trade negotiations with the EU. Or more critically, we have the USDJPY which pits two supposed haven currencies with a started yield against each other – with a notable lack of progress through the past month, until these past two sessions. I think the most remarkable alternative Dollar development is perhaps Gold. An explosion to record highs seems to be the principle interest, but the precious metal plays roles as a haven as well as an alternative to ‘fiat’ assets. The Greenback is the world’s most heavily used reserve, which posses a serious systemic question as to what the future holds for fiat stability. 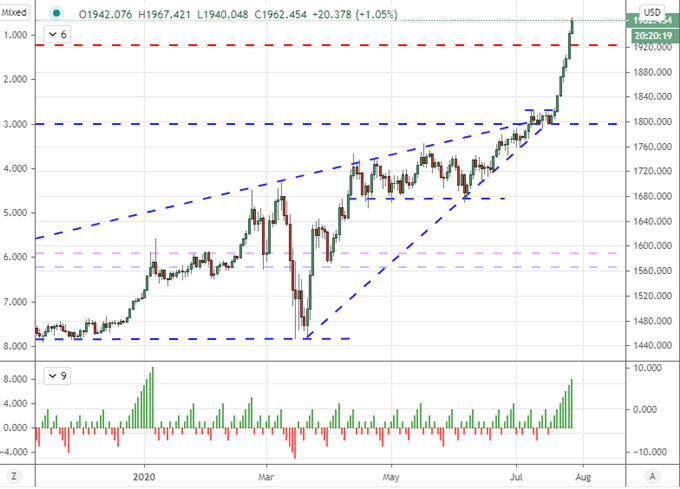 Given the USD’s many key fundamental rolls, there is greater fundamental weight behind its course than what is simply reflected in a direct exchange rate consideration. Consider the difference between the United States’ government’s approach to the coronavirus versus its global counterparts or the progress of monetary policy support. What about the timely growth readings or the long-term debate over principal reserve status. I put this question of what is driving the Dollar’s tumble these past weeks to traders in Twitter and there isn’t a clearly prevailing driver. What does that mean for FX traders? Beware volatility as attention can shift with little warning. 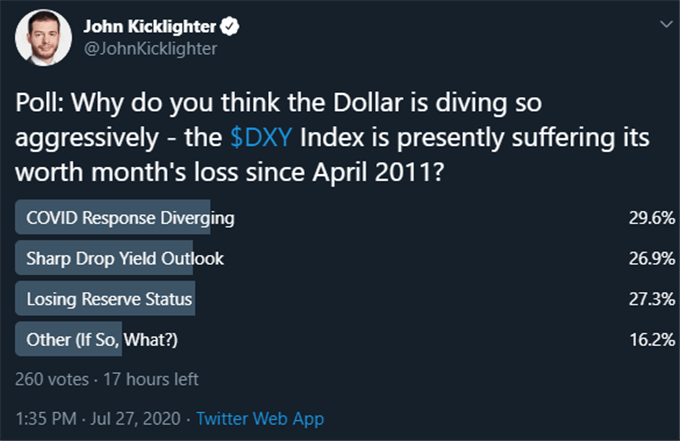 The Fundamental Themes Ahead

While the Dollar is deservedly drawing the most interesting from global macro traders to open this week, it is important to realize that there are other matters that could draw our attention on a different thread with a well-placed headline. Referring to a poll I conducted a two weeks ago, the vast majority of those that participated believe risk appetite has been lifted by stimulus above all other common themes. If that is the case, the FOMC rate decision on Wednesday will draw a lot of our attention forward. That said, my personal focus for the docket is more concentrated on Thursday between US and German GDP alongside the largest run of FAANG earnings releases. 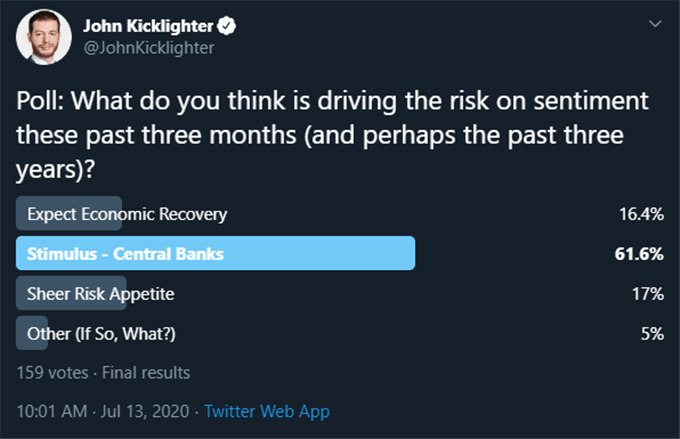 Of all the scheduled events this week, I place my greatest interest on the earnings updates due after Thursday’s New York session close -specifically for Google, Apple and Amazon. As speculative favorites, these benchmarks have helped usher speculative appetite higher for months – if not years – and now doubts are starting to creep in that they could guide the markets in the opposite direction. Meanwhile, the abstract issues are lurking in the background as growing threats to stability, as opposed to lingering sparks for enthusiasm. The rise in cases of coronavirus globally – along with the implications for growth and trade – is arguably a greater charge for fear than opportunity for resolution in a vaccine some months in the future. That said, reports that the US government had invested $472 million more into Moderna (with a tweet from President Trump on its phase three trials) earned MRNA some lift. I’ll keep close tabs on this volatile yet ill-define theme.

Read Paul Robinson’s article on some of the most impressive bubbles in recent market history. 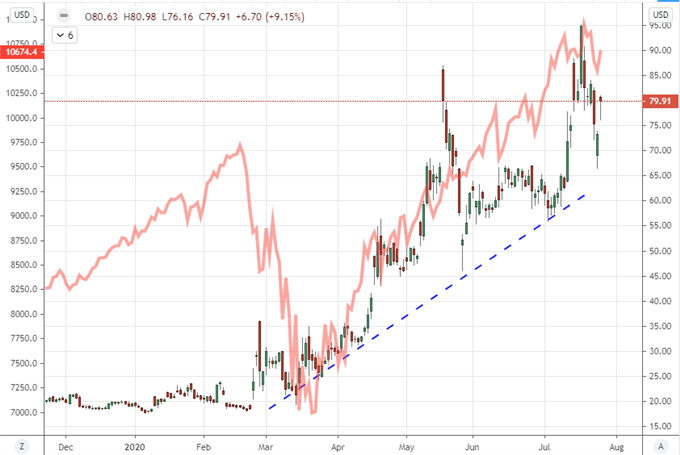