Risk Appetite Breaks – But Is There Trend Potential?

Speculative benchmarks lurched higher this past session, urged on by the eventual approval of a major stimulus program from the European Union. The 750 billion euro fiscal stimulus program aimed at recharging an economy ravaged by the coronavirus triggers a familiar Pavlovian response from investors this past decade where large infusions of capital stimulates a ‘risk-on’ drive. In turn, Germany’s benchmark index, the DAX 30, earned the top global spot this past session with a gap higher brings the market back to its highest level since it began its pandemic-driven collapse. And yet, this equity pace-setter struggled for follow through after the initial jump just like so many of its global counterparts. If we are to find global conviction, it seems to need more support than developments like these. 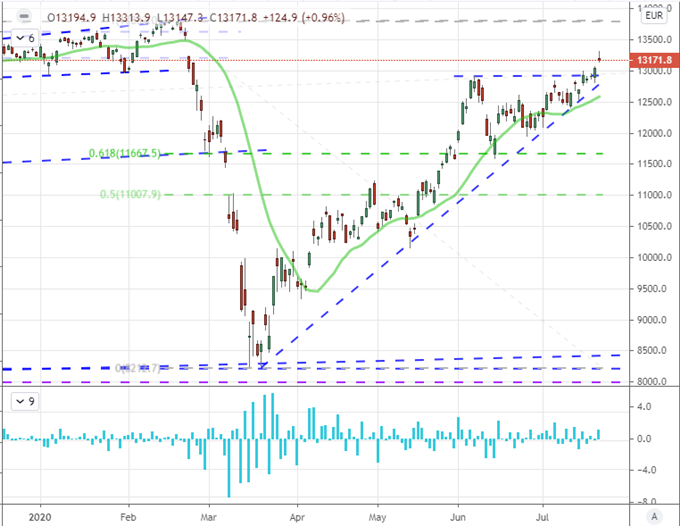 Meanwhile, the seemingly relentless bullish haven of US indices didn’t seem to respond to the news of additional global stimulus quite like bulls would have preferred. The S&P 500 earned a gap higher on the open Tuesday, but that was the sum total of the enthusiasm throughout the day. On the one hand, the break above 3,250 carries some technical weight, but the index still managed to keep its five-day average true range (ATR) heading to a fresh five month low. That does not speak to conviction. It speaks to the hallmarks of FOMO living on a loosely held bias – and some would say the elements of a bubble. 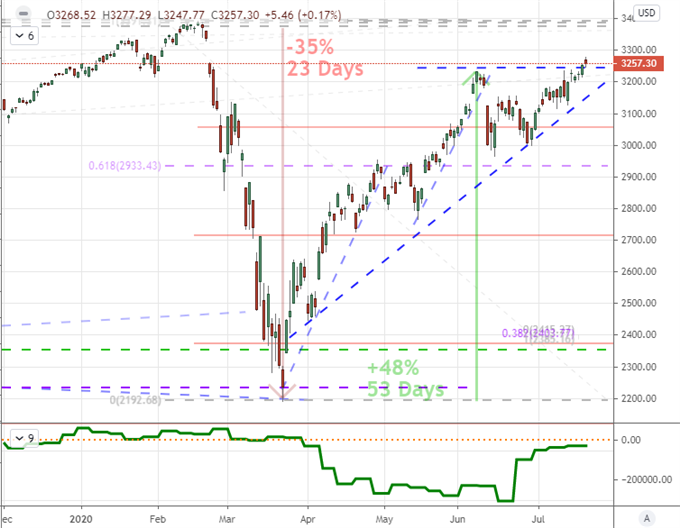 With so many markets dealing with tight ranges, I entered this week with an expectation that technical breakouts were a high probability. Interestingly enough, the three benchmarks I highlighted in a poll asking which would break first all managed to clear their respective boundaries at the same time. However, there is a very serious difference between a mere technical break and a move with intention. Without a solid fundamental backing to carry markets forward, a technical break turns into a loaded ‘false breakout’. So close to highs, the situation looks more likely the foundations of a bubble. And so, I asked Twitter which of the most impressive breakouts on the day was most at-risk of becoming a bubble – or a candidate for collapse. Perhaps not surprising was the majority vote for the high-flying Nasdaq 100. 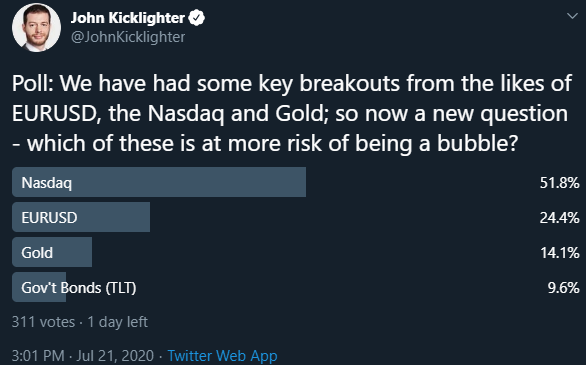 While the tech-laden US index is one of highest perched risk measures of modern times, it isn’t the only risk measure with a loaded technical backdrop. EURUSD was the second choice in the list of options I offered, which is interesting. Generally speaking, relative currency valuation isn’t the backdrop for bubbles, but speculative indulgence certainly does come into play. And, ultimately, the consideration for most traders in this scenario is an attempt to call a top/bottom. The world’s most liquid FX pair surged to a new high above 1.1500 this past session and has easily clear a multi-year high. This could be a reflection of relative growth with a factor of which government is more readily supporting with stimulus; but its seems digging into the crosses that the Greenback’s targeted slide is playing the biggest role at the moment. That’s making for some interesting developments like AUDUSD, GBPUSD and USDZAR among others. 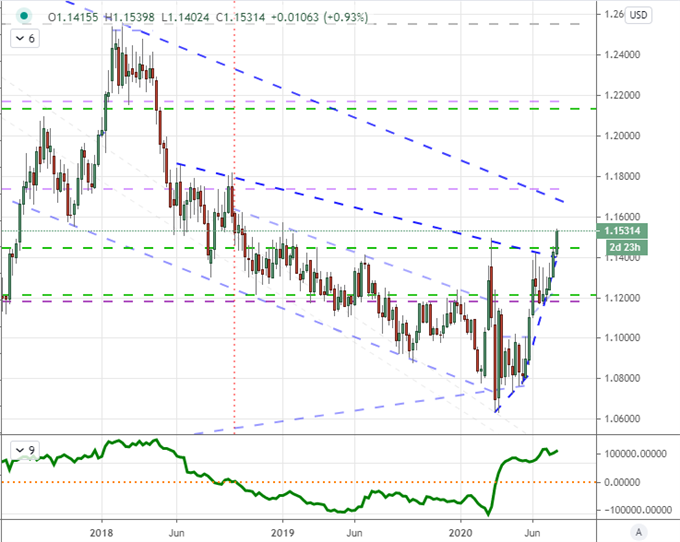 The other break on my list was from gold. The precious metal readily cleared 1,820 this past session and is now trading within approximately 4 percent of record highs. The technical breach isn’t as important as the fundamental backdrop for me. This safe haven is advancing alongside risk-centric assets. That is an unusual backdrop. However when we consider that many believe the foundation for speculative build up is the reinforcement offered by the world’s largest central banks, the ‘anti-fiat’ alternative is a primed asset. Technically speaking, gold is now matching its longest consecutive week bull run since 2011 with the next comparable climb all the way back in 1998. There is a lot of one-sided perspective here. Beware. 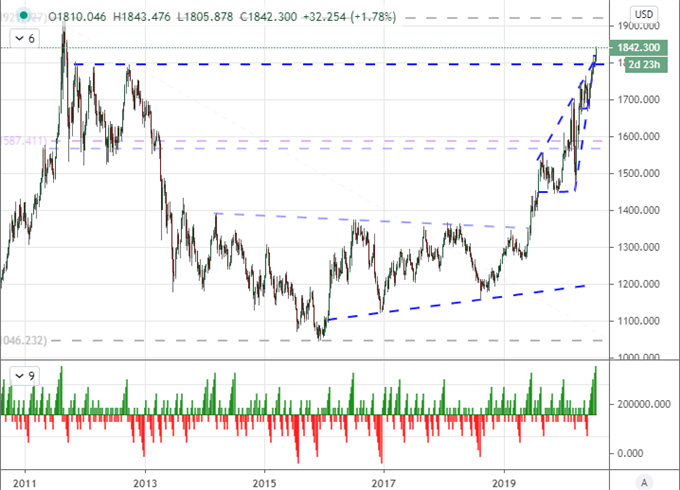 Fundamental Themes Still Matter if You Care About Trends

While my principal focus on the fundamental side is currently on the sheer audacity of FOMO and the long-winded support offered up by seemingly limitless stimulus programs by global central banks and governments (note: they have limits – of effectiveness if not capital), there are other matters to attend to as well. The trade wars are another issue boiling underneath the surface. The Shanghai Composite deserves its own attention, but USDCNH is particularly interesting now with some critical technical support resting below our current spot rate. 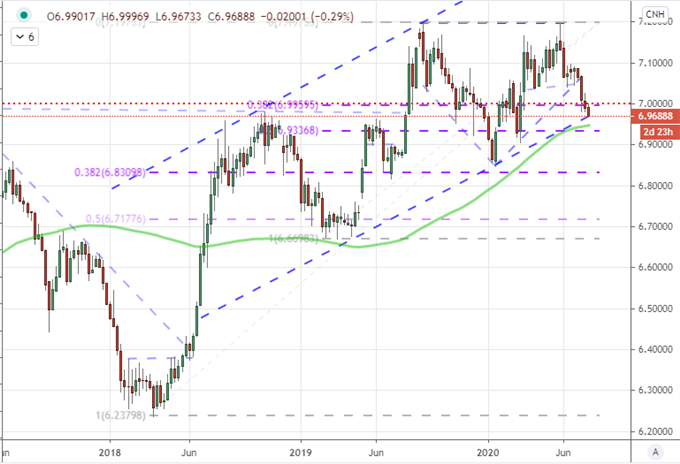 Another familiar headline that seems to have earned at least a single days’ reprieve is the state of the global pandemic. New cases worldwide hit a fresh record high through Monday, but the US tally seems to have eased. That may have as much to do with the shift in data dissemination as it does with the actual figures. In reality, the risk that the contagion shuts down economies (either through grassroots needs or federal dictation) is growing. That said, I am keeping close tabs on the likes of Moderna, Novavax, Gilead and AstraZeneca for news on vaccines – a constant point of enthusiasm. 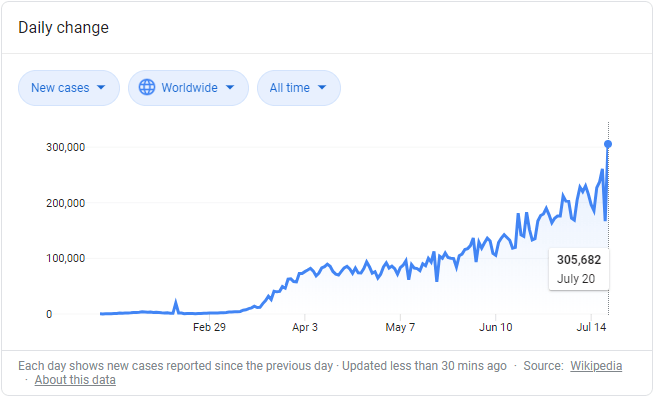