Following Monday’s messy close, it was clear that risk appetite was positioned for a possible course correction. With systemic threats ranging from the resurgence of Covid cases to a shallower path of economic recovery than forecast to a revival of trade wars, it would come as little surprise if the stretched climb in capital markets started to lose traction. And yet, enthusiasm has yet to collapse. This past session, the benchmarks for risk appetite that I keep close tabs on put in for a Tuesday recovery. Leading the effort to recharge a mere breather in confidence, the high-flying tech-laden Nasdaq 100 posted a hefty rebound this past session. It is worth noting that this extends the drought between consecutive bearish sessions (two declines in a row) to a remarkable 41 sessions. That is the longest stretch in decades. Either that is true confidence or another exceptional sign of complacency. 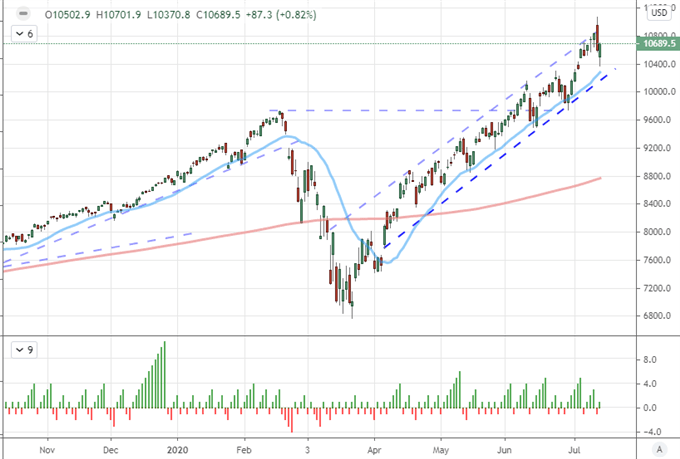 Looking across the horizon of risk-leaning assets, there was a fairly broad buoyancy to note in markets that stand as a benchmark for sentiment. Global indices open during the US afternoon hours, emerging market currencies, high-yield bonds and other measures were tracing out such a performance. Yet, leading it all is the US equity market and in particular the most liquid – and many are arguing, disruptive – tech companies. That said, during the afternoon New York session recovery in US indices, the Nasdaq didn’t manage to regain its lead relative to the broad S&P 500 or the blue-chip Dow. Among the speculative favorites, Tesla was exceptionally volatile but ultimately ended the day lower. FAANG members were a mixed bag, but Netflix remains a focus of mine given the company is due to report Thursday afterhours. 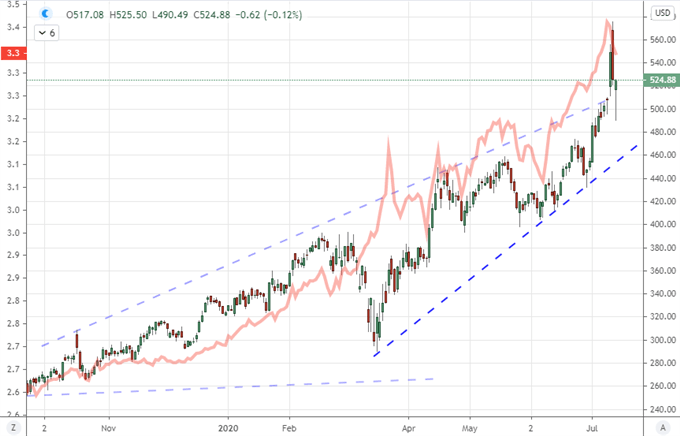 Keeping Tabs on What the Market Considers Key Catalysts

As earnings is supposedly the top market moving theme on most traders’ minds – at least those that replied to my Twitter survey – the anticipation around the earnings update from the streaming media company will carry weight far beyond the normal expectations of such an index component. Learn more about how fundamental impact the market in our education section. Meanwhile, the ‘other’ sectors’ reporting their 2Q figures seem to be drawing the benefit of the doubt. This past session, JPMorgan and Citigroup reported large loan loss provisions but attempted to offset with large trading revenue. Wells Fargo was fairly consistent in its underwhelming update, but WFC shares weren’t too put off. As for Delta, the airliner suffered an even steeper drop in revenue than expected, but that didn’t seem to pull the floor out from under the stock. 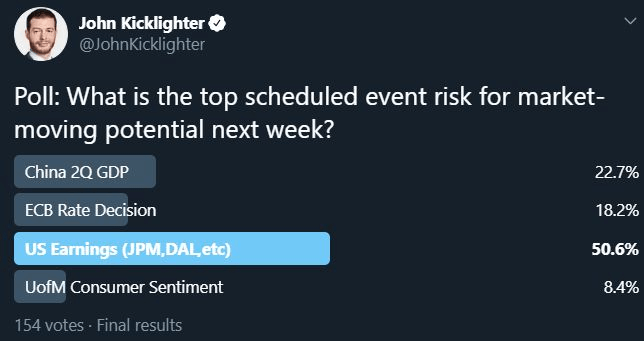 Given that the foundation for speculative appetite doesn’t seem to be beholden to anticipation of a certain economic recovery nor purely bound to the good will of speculative momentum, there is perhaps an appreciation of the resiliency holding out in the likes of global indices. Stimulus remains the number one vote in my survey looking for attribution of favorable sentiment. While that is a precarious dependency with so many authorities warning that they are running very short on resources after driving enormous stimulus programs, there is still enough abstraction here to keep speculation from self-immolation….for now.

Poll of Why Markets Maintain a Bullish Bias 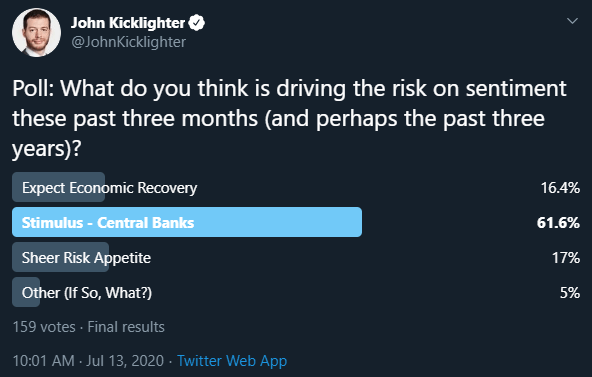 On other fundamental threads, there remains some degree of volatility to the more traditional matters so long as there is sufficient surprise. The Sterling was evidence of a market still paying heed to economic health this past session. A 1.8 percent clip of growth through May out of the UK was significantly stunted relative to the 5.5 percent growth expected, which left the year-over-year pace at a depressing -24 percent. The FTSE 100 managed to claw back its losses and so did GBPUSD by the close of the day. That said, Cable may have leaned heavily on the Dollar’s own weakness to facilitate that ‘tail’. 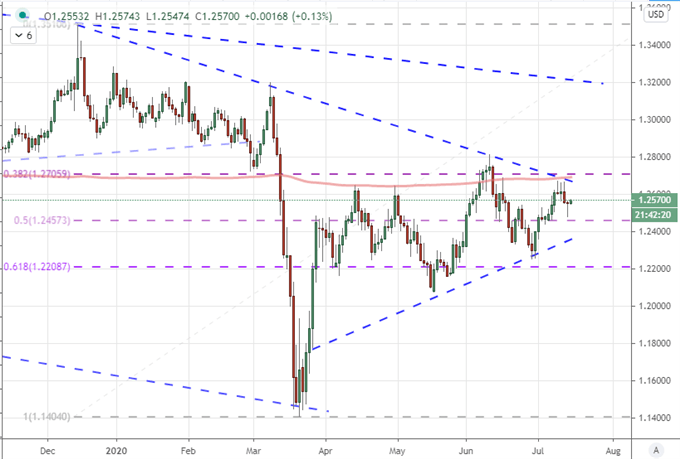 Looking ahead to Wednesday trading session, I will not loose site of the systemic matters for even a day. The ill-effects of the pandemic, the recognition of our present recession and the virulent return of trade wars are risks so severe that they could readily regain control over the system should the masses merely shift their focus. Nevertheless, distraction seems a constant in markets. And so, I will keep track of the scheduled event risk with discreet influence. The Bank of Japan (BOJ) and Bank of Canada (BOC) are scheduled for policy updates today. I watch the BOJ as a parable on how monetary policy can thoroughly lose its influence, but its systemic impact has yet to be realized. For local market impact, I put more risks around the BOC and the Canadian Dollar. If the surprise with a policy shift or significantly alter their forecasts, the constricted Loonie can crack under the pressure.

Chart of USDCAD with 50 and 200-Day Moving Averages (Daily) 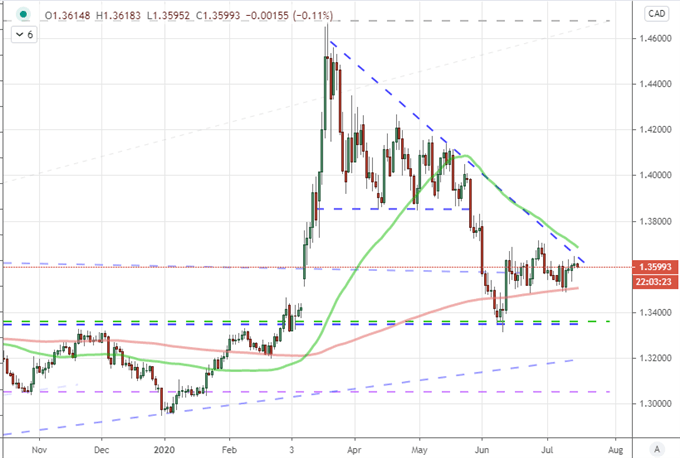 Setting aside direct scheduled event risk, EURUSD has once again moved back towards the center of my radar. Both the Euro’s and Dollar’s economic dockets this coming session are very light. What’s more, clear surprises this past session failed to exert the kind of impact usually expected. Despite German investor sentiment languishing at severe lows and the Dutch PM calling into question the EU rescue fund, the Euro still climbed broadly. Perhaps the Greenback’s have status is shifting to the world’s second most liquid currency. Whatever the justification, the benchmark pair is on the cusp of breaking a multi-year channel resistance. 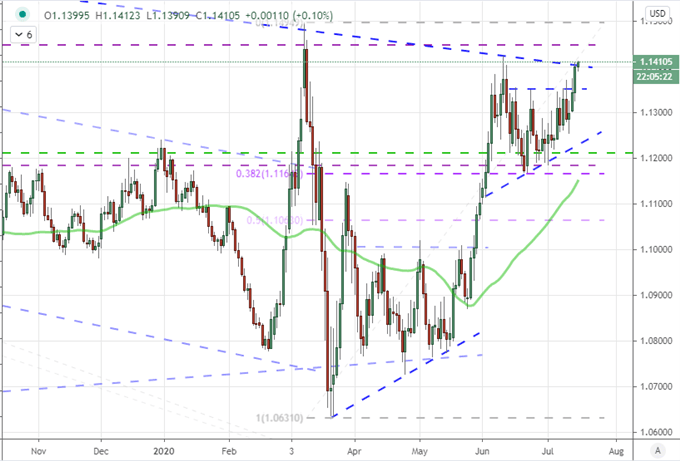