Even Nasdaq and Shanghai Composite Ease Back, Gold Ready to Break

Ultimately, this past session would reflect a flagging in first level risk-leaning speculative benchmarks. Looking across the spectrum of assets for which I like to refer for the breadth of sentiment – equities, emerging market, junk bond, and carry trade milestones among others – there was a notable step back in performance this past session. Further looking at performance of key assets from session to session, there was a notable swoon to trace through New York trade…even among the top performing measures. Through US hours, that about face this past session was most prominent for the tech-heavy Nasdaq 100 which gapped to a record high but ultimately lost the narrative thread as the session progressed. If this benchmark couldn’t seize the speculative opportunity, it bodes poorly for confidence at large. 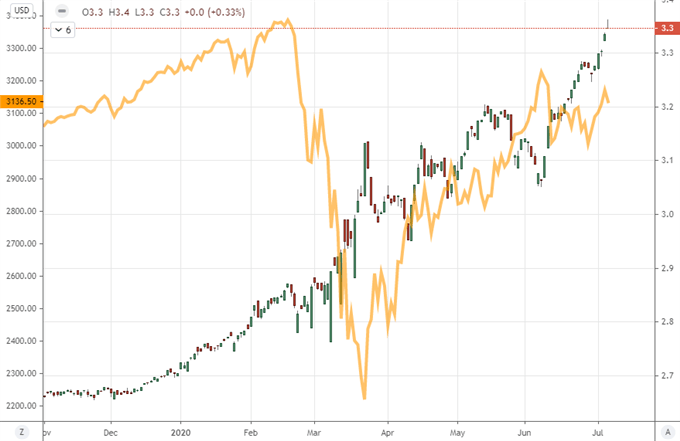 A further concentration of risk appetite on a global basis has been the appetite focused upon Chinese assets. The Shanghai Composite has experienced an incredible 5-day rate of climb which is almost unprecedented among its peers at 12.5 percent through the start of this week. That surge is of dubious impetus as the local government reportedly inspired capital appetite with a promotion of equity investment via state-run media recently. Even this more overt prompt (similar to central bank-driven enthusiasm for the Western World) started to flag in its charge Tuesday. 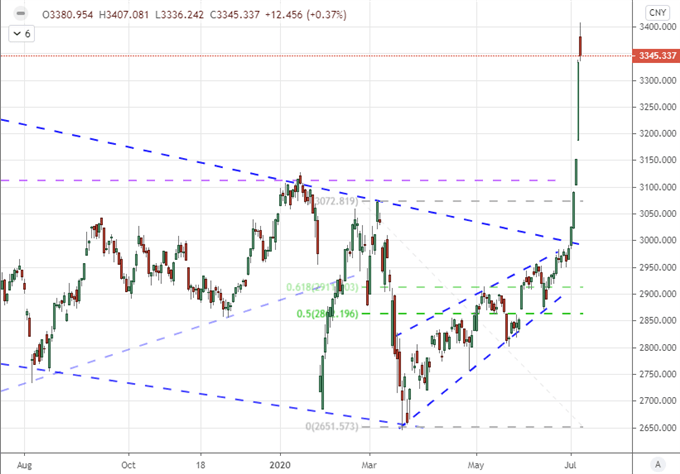 Though less remarkable a measure of diversion for capital flows, I will be keeping close tabs on USDCNH. The exchange rate clear a critical support in trendline support and the 200-day moving average at 7.0400 to start this week, but that didn’t readily carry it through 7.0000: what was initially the level that represented the line in the sand for intervention by Chinese officials in trade balance on the way up. This exchange rate is often considered an outlet for intervention, but its bearing reflects many different important aspects. 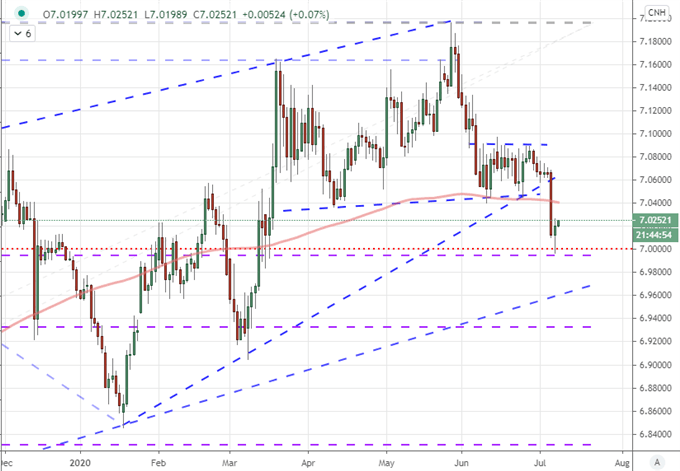 In fundamental terms, traditional US fundamental seemed to enjoy a modest boost this past session. The IBD’s economic optimism survey for the current month actually slipped from 47 to 44, but this is not an indicator that has been given too much credibility these past months amid downgrades from the Fed and IMF. More remarkable was the JOLTs job openings which surged 5.4 million positions which seemed to distinctly contradict the reports that 31.5 million Americans were still filing for unemployment benefits. For the Dollar, there was a very tepid bid, but not enough to see the currency materially outpace the recently uneven Yuan nor its proxy the Australian Dollar – even though the latter notably had the RBA rate decision wane in its support. 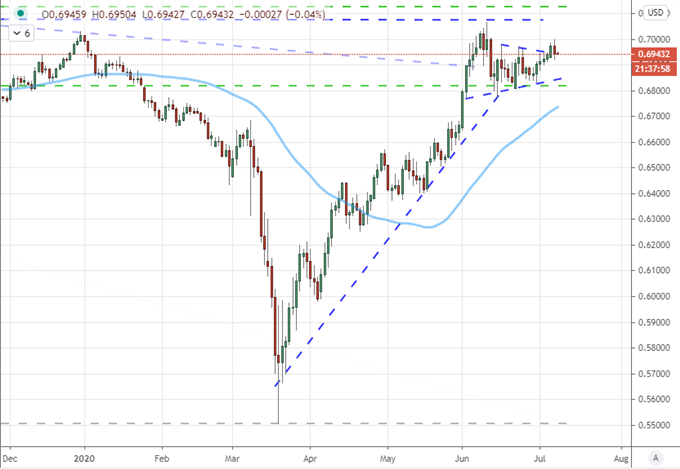 More material in its support for suggested Dollar performance was the EURUSD course. News that the US government was readying for a second stimulus that could be backed by both President Trump (suggested in a Tweet this past session) and the Senate Majority Leader. That stimulus could be construed as a windfall, except US markets didn’t climb themselves, much less relatively. To exacerbate the opportunity, the European Commission downgraded its 2020 economic forecast sharply – from -7.4 percent projected in May to -8.3 percent Tuesday – and yet, the EURUSD refused to track out significant technical course or even rouse remarkable implied volatility. 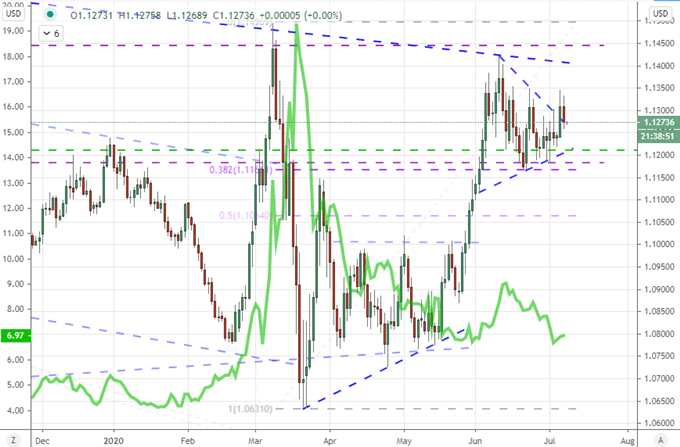 As we move into Wednesday trade, there doesn’t seem a firm commitment to any of the regular suspects of systemic fundamental interest: growth backdrop; relative stimulus or coronavirus fallout. Nevertheless, each of these matters holds serious potential to upend the markets with little advance warning. Through any of these swells, there is the possibility that one region’s markets or a key asset class can benefit over another’s, but there is one corner that seems in a particularly remarkable position to respond: gold. The precious metal has worked its way into a narrow technical corridor between a multi-month rising wedge and range resistance at 1,800. A ‘break of necessity’ seems almost inevitable. 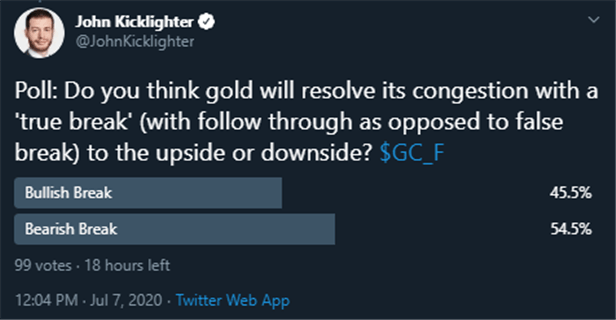 While the commodity has ample opportunity to break lower before the week ends – a forecast that seems to draw a moderately high level of support among market participants – the charge seems to argue for an eventual move in the opposite direction. An underlying lift for the precious metal arises from its role not just as a safe haven when capital markets are running on questionable motivation, but the principal stabilizer in monetary policy acts as an inherent lever for the anti-fiat measure. Whether this is a viable option or not, gold will represent a noteworthy signal ahead. 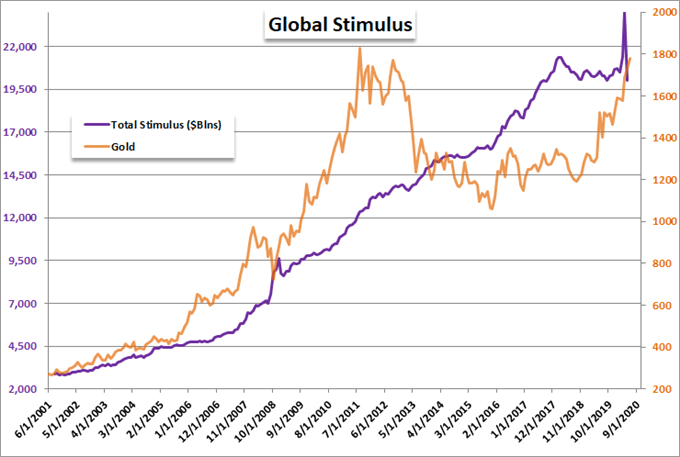