The start of the new trading week and month has extended much of the steadfast but restrained enthusiasm of the preceding weeks. Whether the S&P 500, Yen crosses, emerging market assets or other speculative-leaning assets; the course remains a bullish one. The quality of this risk-reach draws as much of my skepticism as it does my confidence. There is a material sense that momentum is the quality that investors are pursuing versus true ‘value’. That is especially true with a deep recession, trade wars and US protests leading the headlines. Nevertheless, speculative appetite is a force unto itself. Few benchmarks seem to take greater advantage of that appetite better than the Nasdaq 100 where the modest advance would nevertheless put the tech-heavy measure within 1.4 percent of its previously-set record high. It would be quite the contrast to witness a record high from such a benchmark at the same time as we discuss the worst economic recession in approximately 80 years. 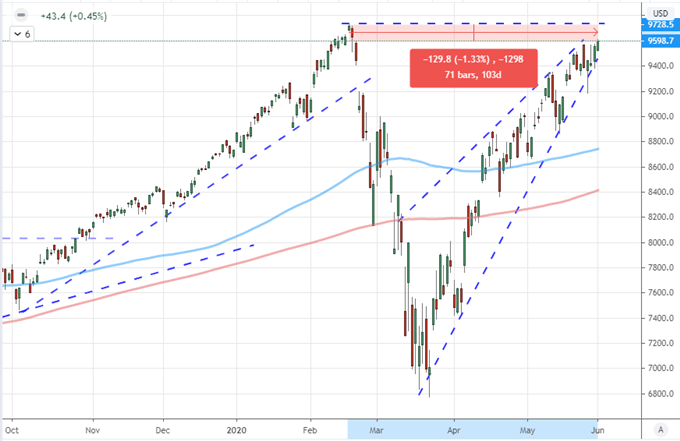 In contrast to the US Nasdaq index, there are grades of more moderate rates of return for the various measures that I follow as a comparison for sentiment. Measuring the contrast between US indices and other popular measures can given insight into the levels of conviction behind the market, which still worries me when comparing the likes of the S&P 500 to the VEU (rest of world equities ETF). One of the more interesting highlights in the speculative mix though was the performance of the EEM emerging market ETF. Though facing a dense confluence of resistance, this measure could present another milestone in broad risk sentiment. 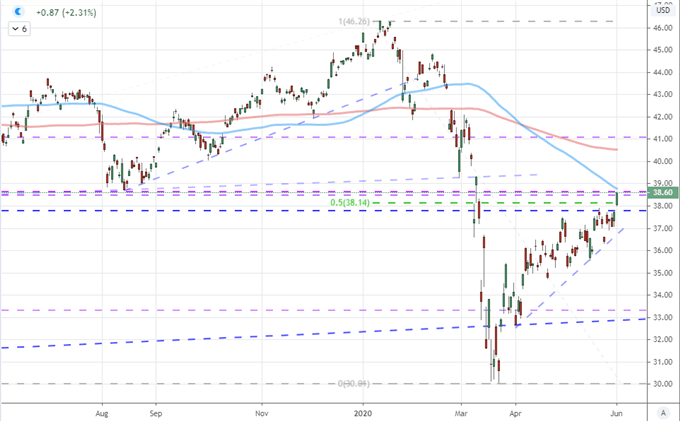 The Dollar Extends Its Slide, Feeding Some Key Technical Breaks

For fundamental motivation, there was a range of systemic influence for investors to draw on. So, what of the major themes was driving the US Dollar to its acute dive? In relative terms, lower rates of return, growth or haven potential can work against a major currency’s performance. The docket seemed to speak to a mix of this concern through the nationwide protests. While the accommodation anticipated from the Fed next week and the recession measures fueled by the ISM manufacturing report give a lot to chew on, the unrest around the death of George Floyd adds another point of trouble for the world’s largest economy. In addition to the social upheaval caused by the event, the further extension of the economic recovery and risk around a second coronavirus outbreak are too tangible to miss. The DXY took the opportunity to extend a fifth days’ decline Monday but pacing for the Greenback varied depending on the pair you referenced. 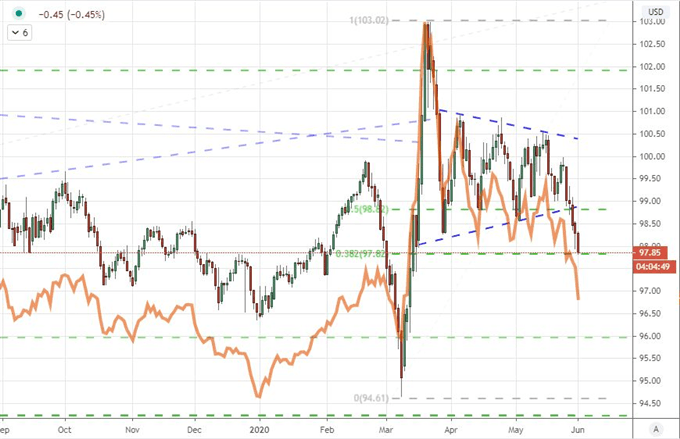 One of the most remarkable moves to show through for USD selling was measured via USDCAD. The measure posted its third worst daily retreat in over two-and-a-half years. The technical extension fits neatly into a ‘former resistance acting as a new resistance’ progression move laid out in any charting textbook. The pair has subsequently cleared a 100-day moving average and 61.8 percent Fib of 2020’s charge. I will watch the 200-day moving average below as next step, not to mention the Bank of Canada rate decision not far ahead. 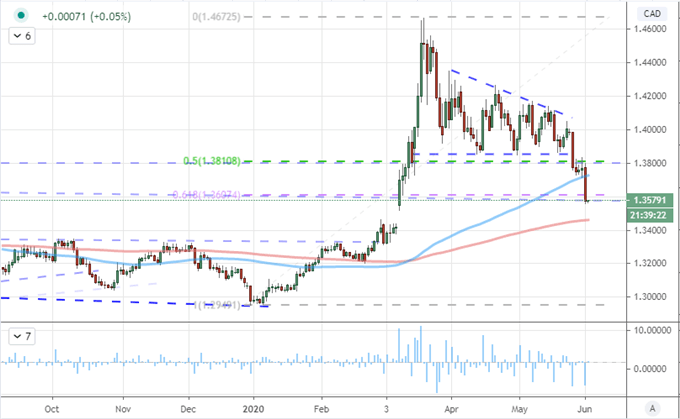 Another Dollar-based major of particular interest for me rounded out the so-called ‘Comm Bloc’. The NZDUSD is a lesser known cross, but it nevertheless was marking an impressive technical track. The pair is now attempting to spin the break of 0.6150 range resistance into momentum that can clear a multi-year former support as fresh resistance and subsequently slice through the 200-day moving average. Such a break would represent notable technical intrigue. 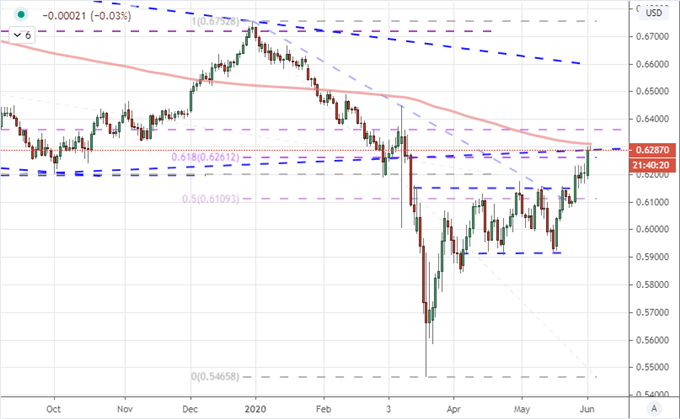 One of the most impressive Dollar majors – aside from USDJPY which suggests risk appetite is carrying equal influence to Greenback weakness – for me has to be AUDUSD. This benchmark sows roots in many different fundamental themes, but its connection to the US-China trade wars is one in which I have found an interest signal on a critical fundamental theme. Yet that link to manufactured economic restraint doesn’t seem to have hurt the pair recently. While AUDUSD continues to push further key technical levels in its recovery, we find the Chinese Yuan (onshore) is far behind it in its own pacing. Has Australia fully divested itself of connection to its key trade partners or is there something else at work here. I lean towards the latter possibility. 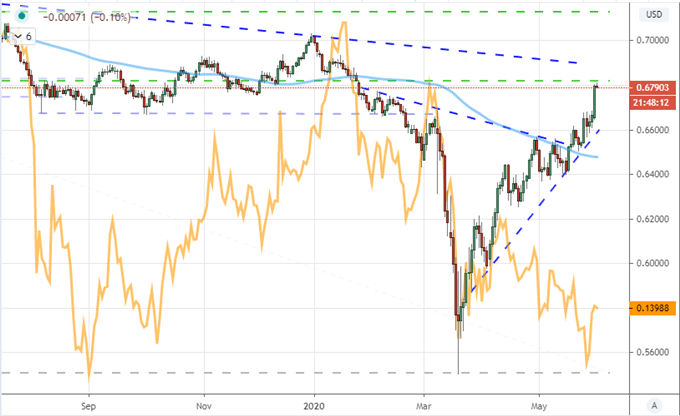 I consider the impact of an escalating trade war between the US and China a key concern. Nevertheless, there are a number of troubling additions to the threat assessment that should not be overlooked. The push and pull between an unmistakable steep recession and the hope fixated on the intensity of that contraction is another such matter. So too is the interest surrounding headlines of possible progress on vaccines to the Covid-19 pandemic – with Gilead and Moderna in the news again this past session. The protests in the US are a particular concern of mine. Aside from the social outrage it raises, there is a possible extension of the recession and catalyst for the coronavirus to recharge. What’s more, the political response could prove another point of accelerant as it has already represented recently. Beware this abstract matter as a fundamental charge. 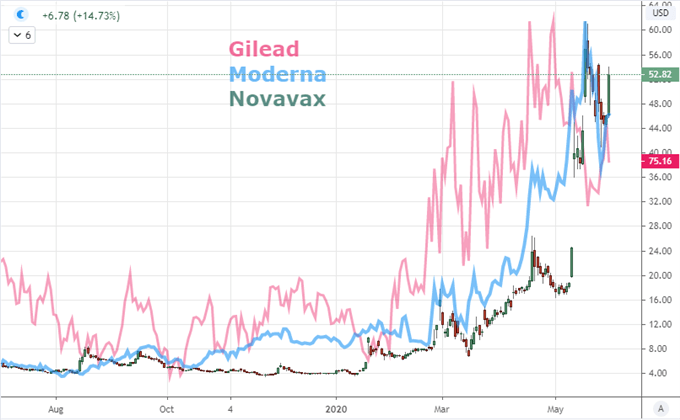