Sentiment Ends the Week How it Began It: Defiant and Bullish

Capital markets were defying typical fundamental headwinds to the point that speculative appetite seemed to exhibit an almost petulance through the end of this past week. ‘Regular’ reminders of economic and financial struggles were prolific over the recently closed period, but the theme that seemed to bubble to the top of the threat list was the rebound in the US-China trade war. After a transition from coronavirus vaccine headlines to economic reopening headlines to a range of data, attention turned to the deteriorating relationship between the two largest economies in the world. On Thursday, US President Donald Trump raised the market’s attention when he announced he would hold a press conference on the White House’s policy towards China. At the brief statement, Trump announced that they would work to revoke Hong Kong’s special status (based on semi-autonomy) and direct a working group to evaluate Chinese companies on US exchanges. This is a clear escalation of tensions, but it seems the market was anticipating worse. After the press conference, both traditional risk assets (like the S&P 500) and the more targeted Chinese Yuan rallied. It is worth reminding that markets can deviate from traditional fundamentals for a time…but not forever. 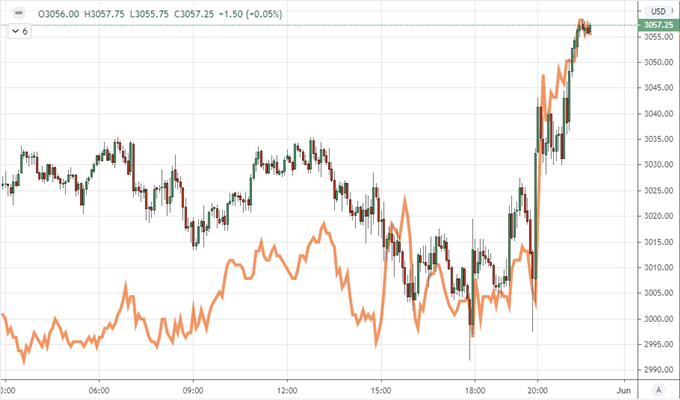 While the weekly closing driver may have been a return to the US-China pressure of the past two years, there are other serious fundamental risks eroding the foundation of the financial system. One of the most destructive is the outlook for economic activity. It seems that the attention is currently fixed just far enough beyond the horizon that speculation over the pace of recovery from the worst recession in decades seems to be the guide to performance. That said, the debate over a ‘V-shaped’ recovery is highly contentious and as dependent on central bank-earned calm as anything else. Yet, what if those early signs of ease for crisis signals fade and the reminders of intense recession continue to march forward? That reminder was clear Friday with the New York Fed’s 2Q US GDP forecast sliding to a -35.5 percent forecast while the Atlanta Fed’s projection sunk to a staggering -51.2 percent slump. Market’s are forward looking and can discount projections, but is a benchmark equity index just off record highs really accounting for such an extreme forecast? 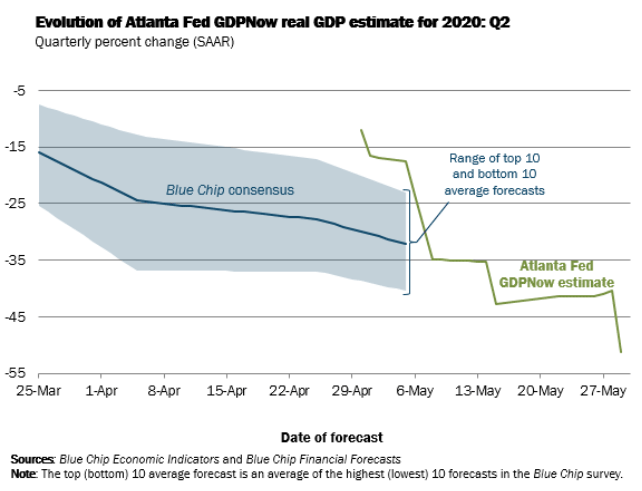 Speaking of speculative trendsetters, the S&P 500 put in for another week of progress in its recovery from the February-March collapse that defined the market’s reflection of the pandemic. Since the March 23rd low, the index has advanced 39 percent and is now approximately 10 percent off the record highs set less than four months ago. Even though the tempo of recovery has slowed, at this pace, a return to historical highs before year’s end looks likely. Confidence in that return to extraordinary heights is particularly controversial, but I have long ago abandoned the notion of ‘outsmarting’ the market or ‘sticking to my fundamental morals’ as supposed irrationality prevails. As the saying goes: ‘markets are never wrong’, but they do snap out of trances. 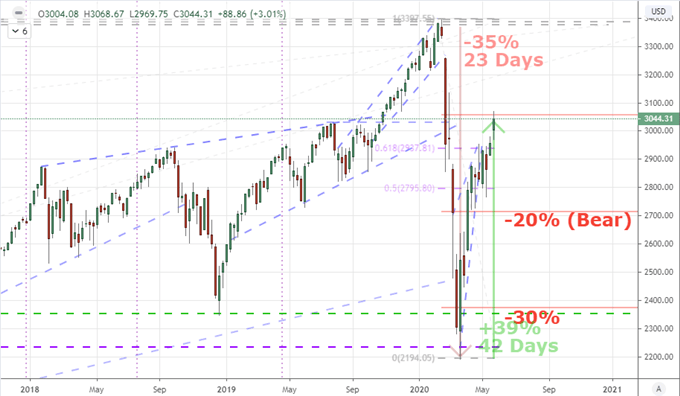 Outside of the systemic themes, there was a lot of stop-and-go volatility across the most popular assets across the financial landscape. One prominent exception seemed to be the EURUSD – arguably the world’s most liquid asset. The benchmark exchange rate advanced for its fourth consecutive daily advance through Friday – thought it left a tail in the process. The pair cleared 1.1000 and a midpoint of the February-March range. The charge seems to have some Dollar influence to it, but the Euro looks to be the more motivated player. The EU’s 750 billion euro stimulus program has proven a strong motivator – but does it have staying power as a motivator? 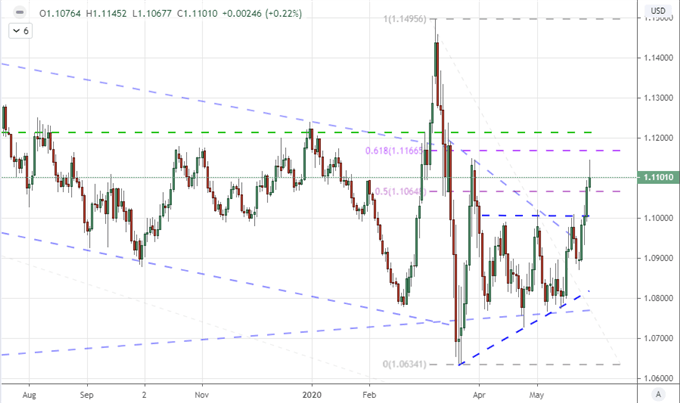 Looking ahead to the coming week, it is worth noting the previous half lives of comparable stimulus programs. The US government’s and Fed’s infusions generated a sharp but limited lift for local (and global) risk assets. As for Japan’s enormous 117 trillion yen write off, genuine confidence seemed to barely register. Keep tabs on this big picture influence over the coming weeks, but be mindful of the ‘other’ crosswinds on tap. For example, the US docket holds the anticipation-heavy monthly NFPs on Friday, but my interests will skew more towards the ISM’s service sector activity report for May. The largest business segment in the largest economy deserves fair attention. 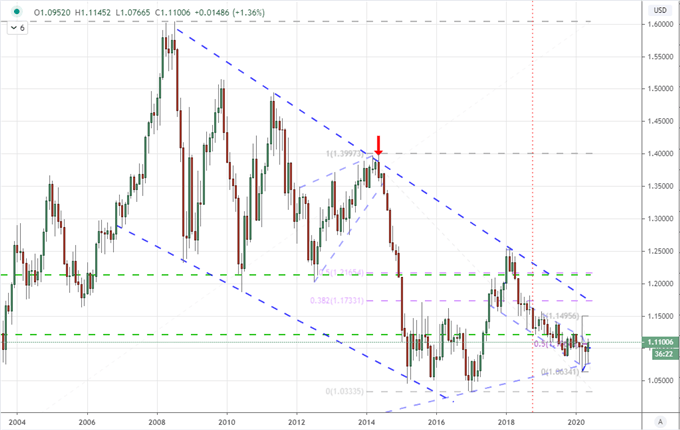 Other Top Event Risk In the Week Ahead

The systemic matters are critical when the market seems to be stretching further and further away from its fundamental foundation, but that doesn’t mean analysis should block out all direct matters. In addition to the US top listings of the ISM service and manufacturing reports as well as the NFPs release, we are looking at a run of emerging market (and final readings from developed world leaders) service and composite PMIs. If you’re looking for the most put-upon major currency over the coming week, it would seem to be the Australian Dollar. In addition to a run of typical, high-level data; the currency’s top listings are 1Q Australian GDP and the RBA rate decision. AUDUSD is just one of the interesting crosses to keep tabs on, but AUDJPY is one of the most technically-interesting. 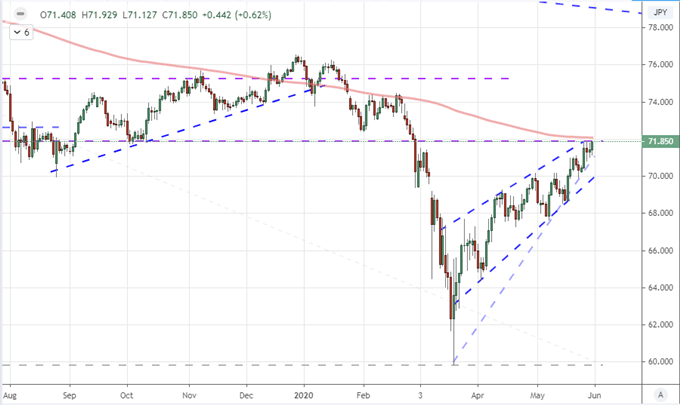 Another currency of merit ahead for its fundamental potential is the Canadian Dollar. There are again a number of interesting indicators here such as the local trade balance; but my more explicit interest is in the Bank of Canada rate decision. There is optionality from active stimulus all the way down to forward guidance, but the environment is such that the market will extrapolate from whatever is announced. 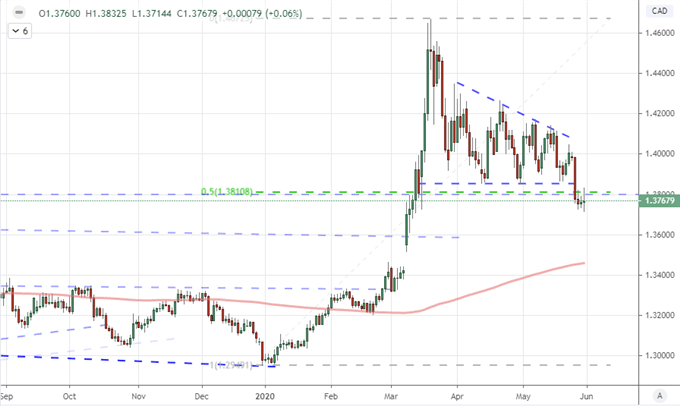