There Is A Skew In ‘Potential’ Around US-China Relationship Progress

When incorporating thematic fundamental themes into our strategy, most people focus on the ‘probability’ – the possible outcome whether it be bullish or bearish. That is certainly an important element to track when gauging direction and momentum; but arguably the more tactical aspect of such matters when following scenarios is the ‘potential’ aspect. That is what I am considering with the escalating tensions between the United States and China. The ‘best case’ scenario is the alleviation of a compounding recession risk. What would that do for risk appetite if it doesn’t reset a course of growth or greater returns. Alternatively, a deteriorating relationship economic relationship between the two largest economies in the world can materially exacerbate an already-severe recession. 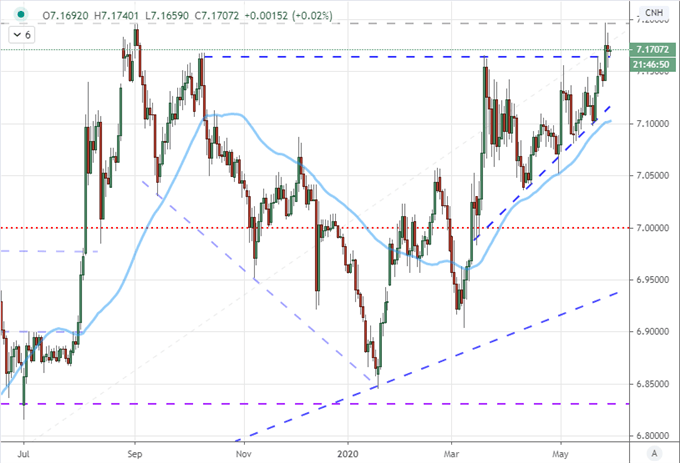 In little more than a week, the trade wars of 2018-2019 have returned full-steam. This past session, risk trends were thrown for a loop when the news that China’s parliament had advanced the Hong Kong security law that many western world authorities have voiced concern was tantamount to removing the country’s semi-autonomous position. In return, some White House officials have suggested that a revocation of region’s special status would follow. That was the concern that was stoked by an announcement that a press conference ‘on China’ was due from President Trump on Friday. The S&P 500 and other risk measures took a dive after the news in the closing hours of Thursday trade in the New York session. Whether the news breaks before the US open, during active trade or after the close can have a material influence on how the markets are shaped. While USDCNH would seem a obvious focal point to watch and a benchmark like the SPX is the ultimate ‘risk’ measure, AUDUSD is perhaps the most agile and un-doctored market to follow. 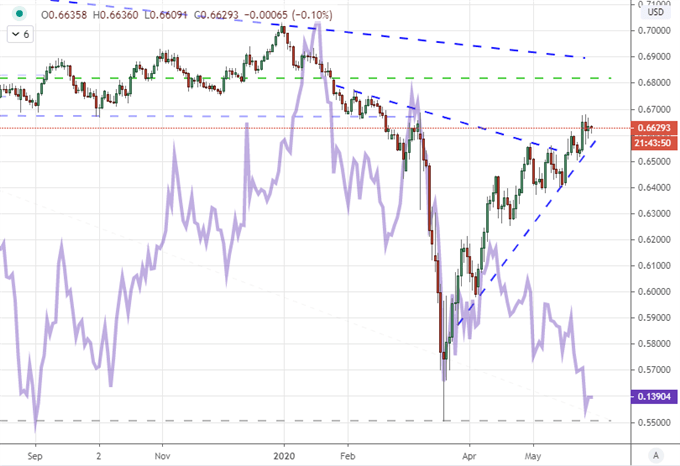 Stimulus Is the Bullish Potential Counterpart to Trade Wars

Where further escalation of the US-China trade war poses a far more material risk to the global markets than potential booster, there are certain matters that are stunted for their threat while leveraging greater potential. One such theme – at least for the present – is stimulus. While we have seen some extraordinary moves from the world’s largest policymakers since the market tumult around the pandemic and economic shutdown, the most recent iterations have seemed more of a top-off for risk seeking. Following the announcement of the EU’s 750 billion euro stimulus program (which must be ratified by each members’ governments), Japan approved a 117 trillion yen program which was twice what was proposed just a month ago. These are enormous programs. What better pair to measure this wave than EURJPY? The Euro has climbed broadly on the news with breaks for the likes of EURUSD (above 1.1000) and EURCHF. Stimulus does raise promise for countries’ economic recovery, but it seemingly doesn’t benefit the Yen in the same way. Perhaps the Euro’s benefit and Yen cross’s risk lean converges the potential. 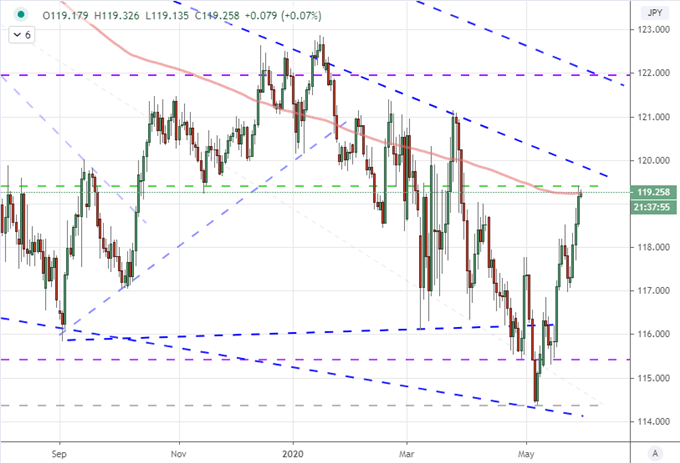 Stimulus has had a favorable overall influence on risk trends over the past decade. However, the correlation between balance sheet and capital market milestone has certainly wavered in the past few years. The positive correlation between balance sheet and currency that we have seen in recent months seems a modern phenomenon – and it is unclear how long it lasts. I don’t expect the favorable capital market backdrop and certainly not the positive currency correlation to hold. What seems more consistent, however, is the correlation between stimulus and gold. The alternative to traditional fiat continues to hold its buoyancy and it doesn’t seem the product of outright risk aversion, which is the other dominant role it plays. So long as the metal climbs, I will remain skeptical of both sentiment and currency strength. 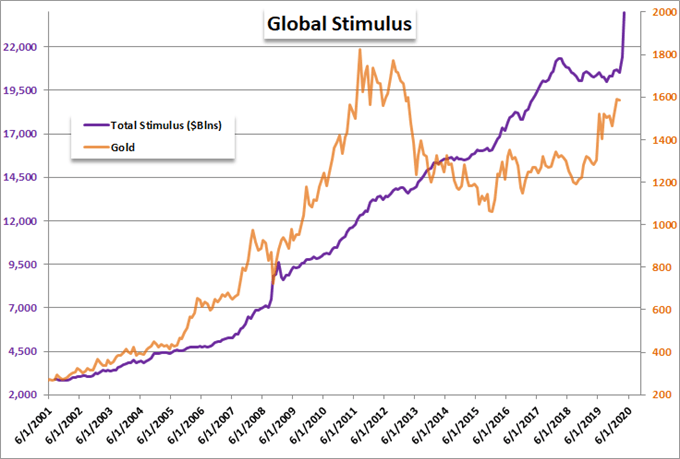 While the US-China relationship and stimulus are key themes to watch, I am also cognizant that markets can signal focus and conviction change faster and more readily than the fundamental interpretation can be made. One benchmark of considerable note is the FX leading EURUSD. The pair has finally overtaken 1.1000 this past session and the 200-day moving average as well as the midpoint of March’s exceptional range in turn. Comparative growth as an underlying concern may find no better pace gauge than this pair. 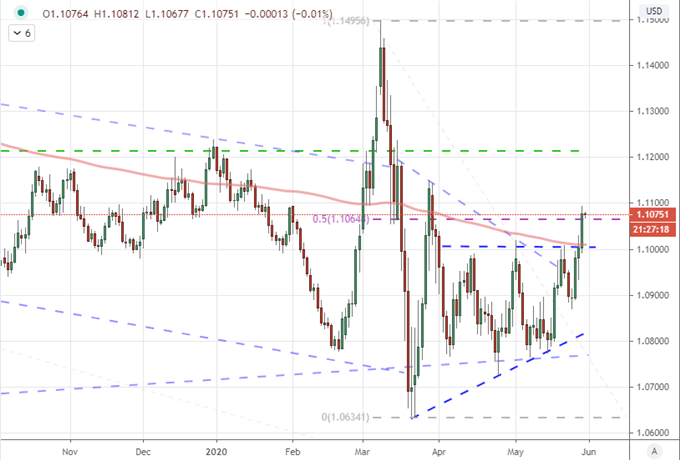 The S&P 500 in turn remains one of my preferred imperfect measures of often-irrational risk trends. The US benchmark closed slightly lower through this past session owing to the news of the Friday press conference. That would break the consecutive climb before it could close out a four-day advance – what would have been the first such move since early February. The index has wavered, but it is still holding above the closely observed 200-day moving average at 3,000. Does that last? 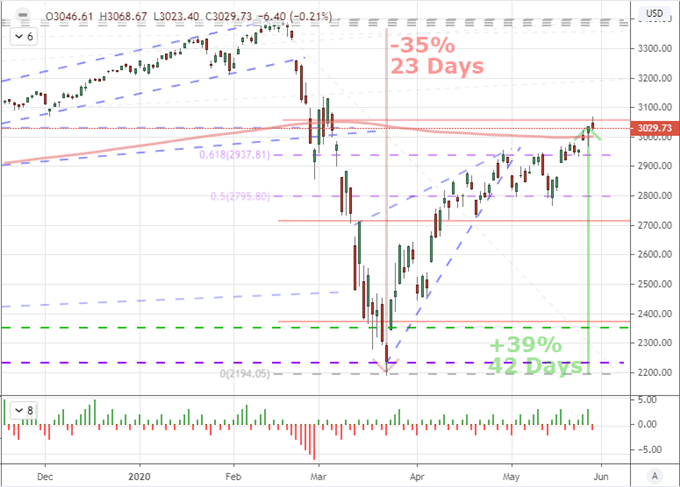