Sentiment managed to carry higher this past session despite a change in motivation. When discussion of a vaccine for the coronavirus with yet another company (Novavax) entering the fray Tuesday with a trial of its own answer to the pandemic, speculative appetite seemed to catch another temporary wind to its sails via the same route taken by AstraZeneca, Moderna and Gilead before it. Yet, this foundation for an expedited economic reopening has seen a progressively deteriorating half life when it comes to its speculative lift. It seems stimulus seems to be the theme du jour with the US session closing on rumors that a second stimulus to ‘main street’ could be in the works. This is not a new discussion point, but the markets were in the mood to pay service to the concept. 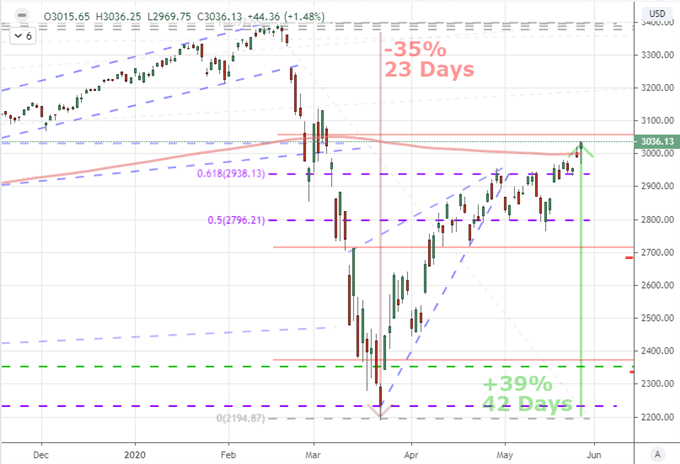 The interest in stimulus began before the US open Wednesday – as was evident in the remarkable rally from the likes of the DAX German equity index. News that the European Union was baking a 750 billion euro stimulus package represented another important lift in the equal distribution of global external support. Previously, the discussion was surrounding Germany’s and France’s pus for a 500 billion euro program backed by joint bonds. This had a material effect on risk appetite, but the need is clear – ECB President Lagarde remarked that Europe is on pace to meet closer to its worst case scenario for economic retrenchment. What was interesting in this infusion talk was that the Euro would actually gain broadly on the day. Historically, more stimulus is more often associated to a retreat in the target currency; but the focus now seems to be which economy will experience an accelerated rate of growth. How long will that positive correlation persist? It remains to be seen, but EURUSD’s 200-day moving average is awaiting that answer. 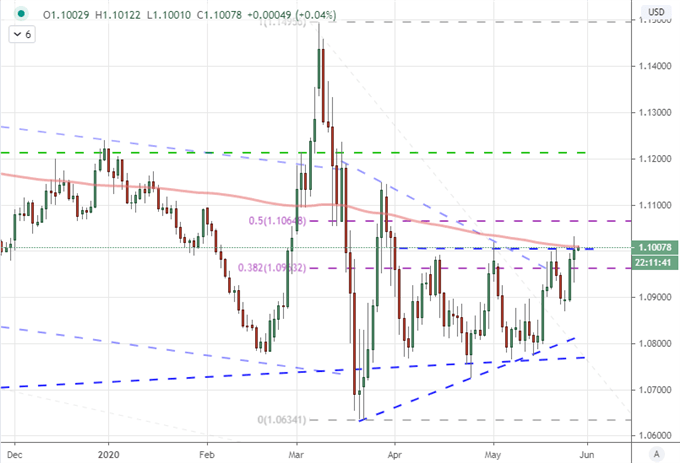 Optimism seems to be the prevailing trend of late, but it is certainly lacking for consistency. Reopening economies, vaccine hopes and stimulus have traded the responsibility of late; but each has represented a short-lived momentum when a fresh headline isn’t a readily at hand. That is a concern when looking to a benchmark like the S&P 500, but it is also a hamper to some key tentative breakouts for the likes of the Dollar-based majors. USDCAD dropped below the mid-point of its February-March rally around 1.3800, USDMXN finally put in a bullish day after 7 straight losses took it to its own ’50 percent Fib’ and NZDUSD overtook its own 0.6150 range top to lose drive immediately thereafter. This may be as much a reflection of the Dollar as risk trends, but I will always defer to the latter for dominant influence. 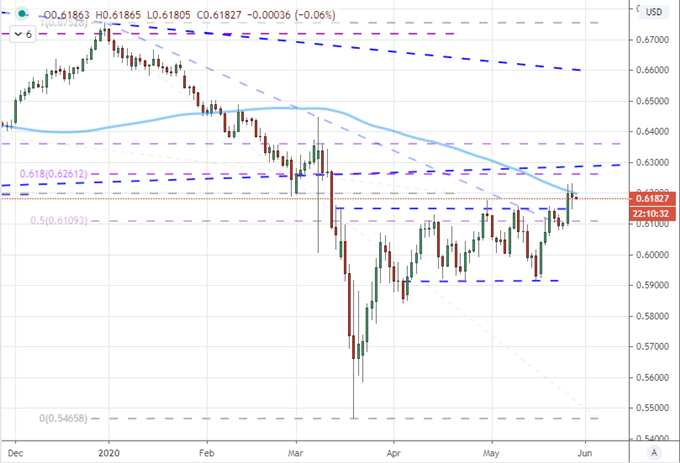 The Overriding Systemic Risk to Keep Tabs On

While there are favorable fundamental stair steps to keep the bulls marking modest progress, there lurks a constant threat of systemic risk that can enable bearish fears should the masses so chose to give it priority. While the crush of recession is a seeming constant through headlines lately, the newest spark seems to be the revived tension between the United States and China. Following the news of China’s intention to implement a security law in Hong Kong and stepped up sanctions, we learned Wednesday that the US would not certify HK’s autonomy. USDCNH finally seemed to take notice with a drive that pushed an intraday series high for the offshore currency cross. The real question is whether this is more accurately a reflection of market forces or policy officials. 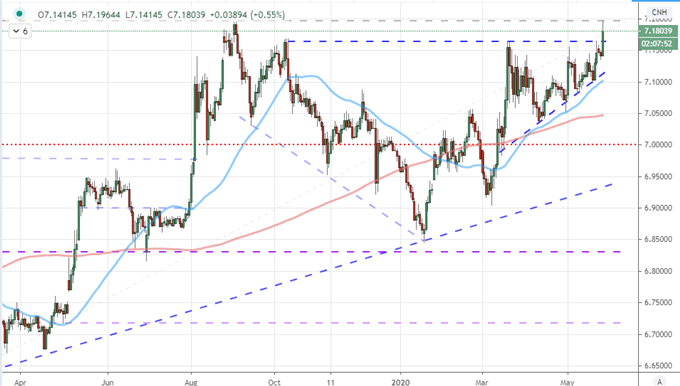 While USDCNH finally seems to be acknowledging the risk at hand, the rest of the market doesn’t seem ready to response. The typically, closely related AUDUSD eased back the past session, but it wouldn’t make a serious effort to converge to the Chinese rate. Perhaps this is a sign that Australia has divorced itself from the strong influences of its major export partner, but that would be presumptuous indeed. 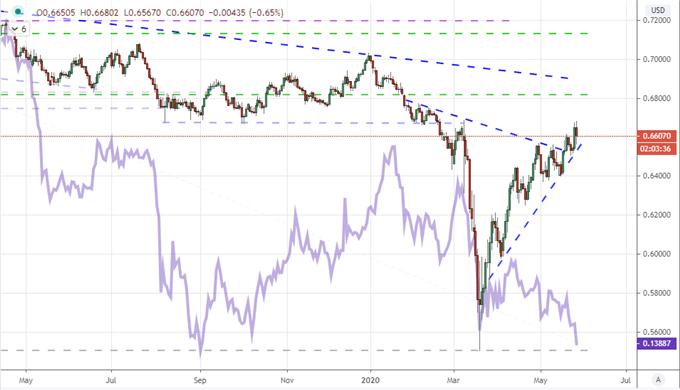 Beyond AUDUSD’s connection to the USDCNH, there remains an obvious disconnect through risk trends. If the convenient bounce from one temporary salve to the next for a risk advance finally gives way to more comprehensive risks, it will likely find a build up of premium at risk of deflating. I will keep tabs on the likes of the S&P 500 which had a strong correlation (inverse) to USDCNH back in 2015-2016 where risk appetite seemed to center upon international relationships. That connection has waned somewhat these past few years even as trade wars has proven the more storied driver - at least a longer history thus far relative to the pandemic. Should the two re-converge, it would make fundamentals a more troubling read. 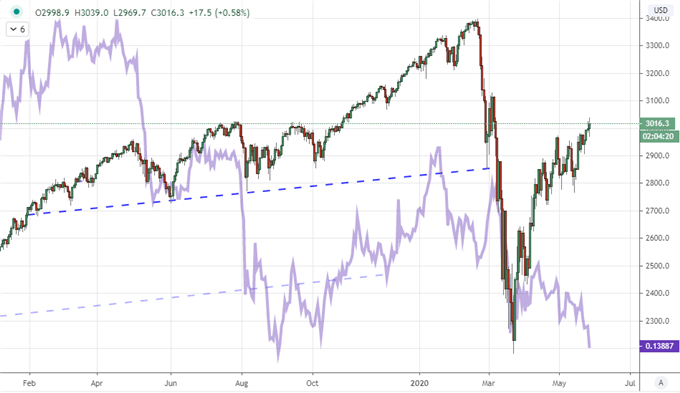