The return of London and New York trade Tuesday had a material impact on liquidity and an unmistakable boost to trading activity. On the open of US trade, there was a charged speculative run that resulted in a few high profile technical accomplishments. For the S&P 500, the opening salvo earned a charge to the 200-day moving average (3,000) which the market briefly traded above. The blue-chip Dow hurdled a similarly important level at 25,000; but neither would hold their respective critical levels. That would lead to some serious questions as to commitment by the speculative masses. With other major risk benchmarks – global indices, emerging markets, junk bonds, carry, etc – trading far behind their major resistance levels, is sentiment at risk of losing critical traction? 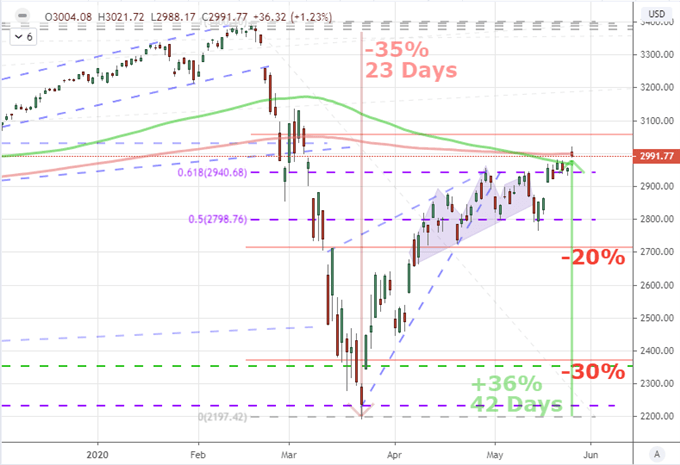 Looking at the US indices as a group, there was a notable contrast among the major measures. Over the past months – not to mention the past years – the tech-heavy Nasdaq index has outpaced the broader measures (ie S&P 500) as well as the blue-chip measures (ie the Dow). That wasn’t the case for the first full session for US trade this week. Risk appetite, as we have come to know it, seemed to ebb with the ratio of NDX-to-DOW posted its biggest retreat in a few months. On a questionable ‘risk on’ day, that draws some serious questions. Those questions extend further to the other risk measures across the global markets. 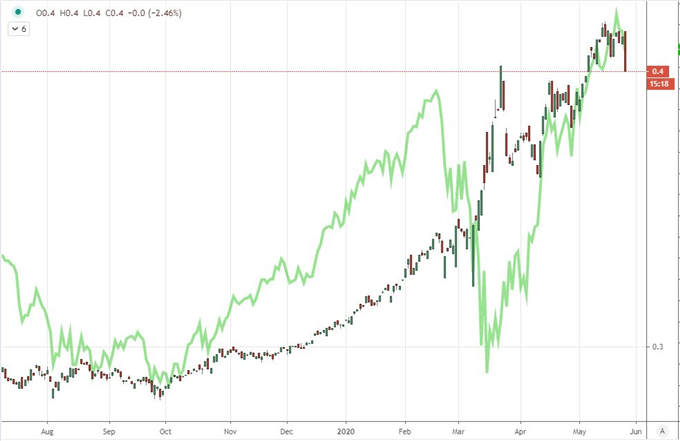 The Fundamental Charge That Will Take Responsibility for Markets

What is taking fundamental charge at the moment. That is something we should be able to identify for the broader market as it can helm the most effective theme in the financial system: speculative appetite. I believe sheer risk trends are exerting a greater influence than virtually all other identifiable themes as of late – and that includes the focus on the intensity of recession or the scale of global stimulus. Perhaps ironically, President Trump seemed tap into the self-sustaining aspects of risk appetite when he noted Tuesday that the local indices had clear critical levels – and he in turn connected the sheer sentiment view to tangible fundamental milestones.

Meanwhile, the recession threat that continues to weigh the ‘lagging’ indicators to new lows – such as the German final 1Q GDP update or Fitch official 2020 forecast – is overruled by the lower-impact indicators that nonetheless are more timely. Thematically, headline interest in the progress towards a vaccine to the Coronavirus (Covid-19) has had an obvious surge in influence lately. Following on the back of reports of progress in Gilead, Moderna and AstraZeneca drugs for combatting the pandemic; the news outlets seized on a new player: Novavax. The point is not who has the most effective treatment but rather who is taking over the most recent leg of enthusiasm.

Chart of Novavax, AstraZeneca in Red, Moderna in Blue, Gilead in Green (Daily) 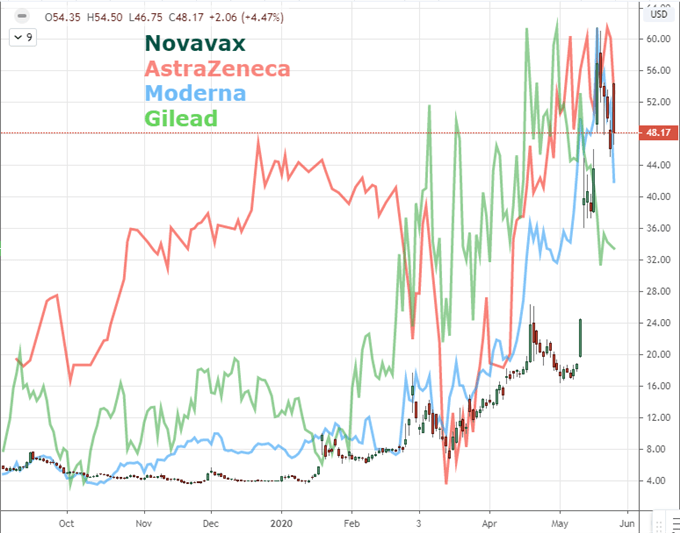 While speculative appetite and vaccines have a bullish fundamental default, the deteriorating relationship between the US and China is a lurking bearish threat. China announced a national security law for Hong Kong that would override the region’s legislature. That announcement has drawn rebuke from Western democracies concerned about the implication for freedoms. With the White House chief economic adviser warning on the fallout from this move, traders should keep close eye on USDHKD (Hong Kong Dollar), USDCNH, the Hang Sent Index and Shanghai Composite for indications as to how risk trends will trend. 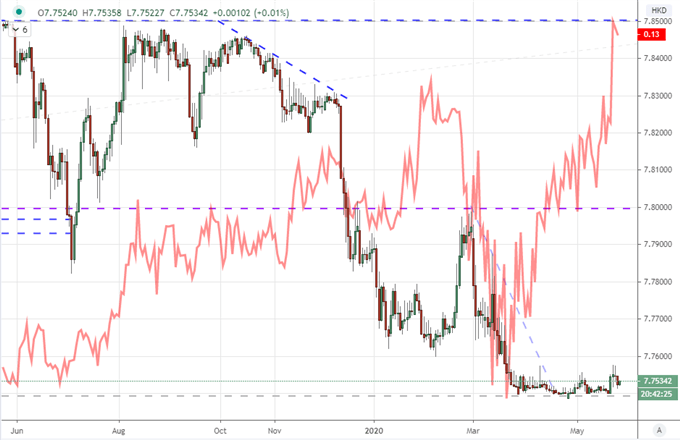 Dollar Dives for a DXY Range, USDCAD and NZDUSD Breakouts

Meanwhile, the benchmark Dollar took a dive through this past session. Whether this was a reflection of the Greenback’s standing as a dis-used haven, a relative loss in fundamental traction or perhaps a drop in yield potential is unclear. Nevertheless, if we were to look at the potential for follow through, that question would be important to answer. For the DXY Dollar Index, the slide brought the benchmark to its congestion (back to mid-March) floor and 100-Day moving average. EURUSD was similarly closing on its 200-day moving average as resistance around 1.1000. 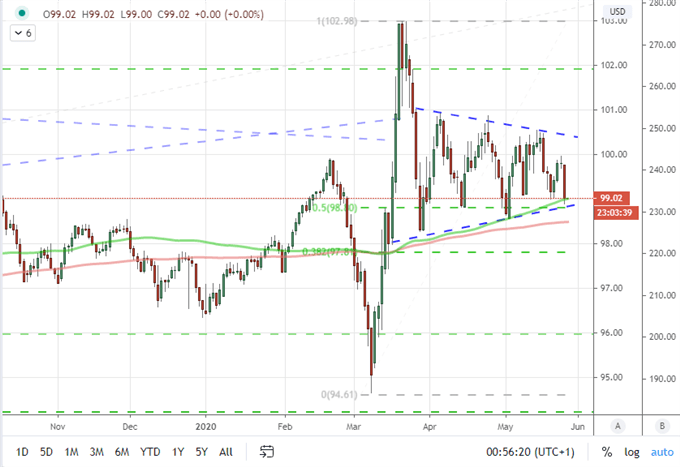 Alternatively to the boundary test of DXY or EURUSD, we have the clear progress from the likes of GBPUSD or AUDUSD. Both would hit fresh recent highs which is in turn multi-month highs for these benchmarks. Yet, the technical cues are not that remarkable in the grand scheme of things. If I were looking for the most technical punch, it would come from the likes of USDCAD and NZDUSD. Both ‘lesser majors’ triggered high profile technical breaks. Yet, we have seen so many high visibility breaks these past weeks and months. The real question is follow through. Is there any potential of that here? 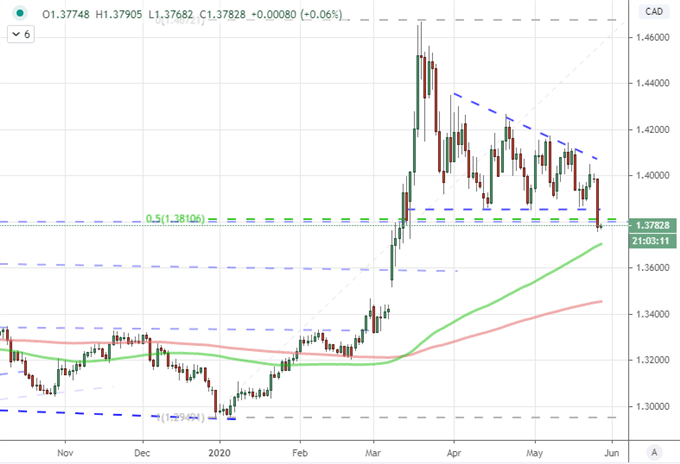