Risk Appetite Takes A US-Session Turn for the Worst

The bearish mood that eventually defined Tuesday’s session wasn’t a consistent signal throughout the progression of the day. Risk aversion took traction explicitly through the afternoon hours of the US session. In fact, the final few hours of exchange-based trading on the NYSE presented the heaviest selling of the day. Ultimately, the S&P 500 would suffer its biggest day-over-day loss since the start of the month – remarkable given the start of the day with a gap higher. If we were to gauge the day on an open-to-close basis (neutralize afterhours/pre-hours speculative charge), Tuesday’s ‘active session’ retreat was the worst in many week. Besides the timing of the retreat, it is worth noting the breadth of the move as well. While European and Asian indices (DAX, FTSE100, Nikkei 225) wouldn’t show the same slide owing to the time frame of the sentiment shift, there was a uniform drop in benchmarks that span market type but trade through US hours – EEM (emerging markets), HYG (junk bonds) and USDJPY (carry trade) among others. 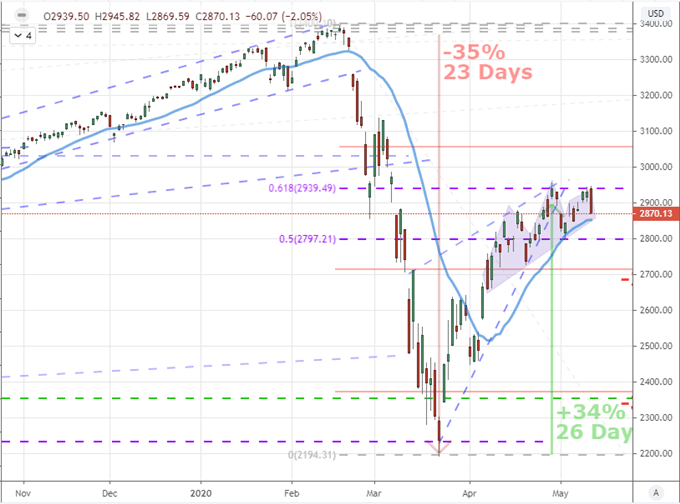 Another interesting development on the session besides the timing of the sentiment turn was the breadth of the speculative reach. The observation that benchmarks from the SPY to EEM to USDJPY would all turn tide at the same time would offer strong evidence of an underlying collapse of conviction. Yet the most remarkable benchmark on my radar was the simultaneous, paced retreat of the Nasdaq 100 and S&P 500. These are two very different benchmarks from a risk perspective – the former a tech favorite and thereby the pinnacle of speculation. Yet, the ratio between the two this past session was little changed through Tuesday’s retreat. This is more likely indicative of a broader risk aversion across the system rather than an cascading influence starting from the top performing area of the financial system (US tech shares). 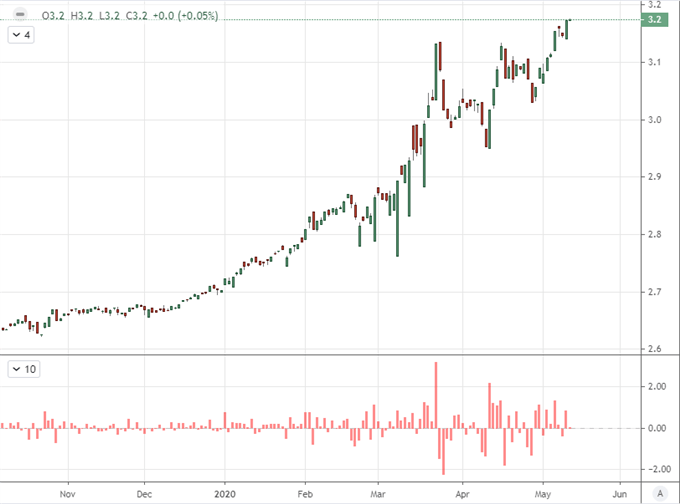 Negative Rates are A Top Topic for Speculative Appetite

If we are to expect a technical trigger to turn into a full-spectrum sentiment drive, it carries the greatest potential through a fundamental current. Though there is a very clear recession to flesh out through the second quarter, the market remains incredibly aloof of this reality. Thus, the attention is likely to fixate on something more timely and headline-worthy. Perhaps external monetary policy support will fill that attention gap. This past session there was an unmistakable effort by the Federal Reserve to set expectations against ready anticipation of negative rates. Officials from Bullard to Kashkari to Mester all voiced opposition to this solution – if at least from a first stage solution. Yet this well thought out strategy may find a difficulty from US President Donald Trump. The President was seemingly clued into the Fed’s strategy to guide the market against negative rates by calling out the benefits of the opposite outcome explicitly. This dispute will likely rates the uncertainty in the system and thereby the volatility.

Despite Trump’s pressure on the Federal Reserve to follow their European, Japanese and Swiss counterparts into the uncharted territory of negative rates, the markets remain relatively restrained on their expectations. The implied Fed Fund rates from the December futures contracts haven’t returned to negative territory after last weeks brief interlude. The Dollar will likely be weighing this consideration closely, but my interests are more squarely fixed on risk trends with this theme in mind. 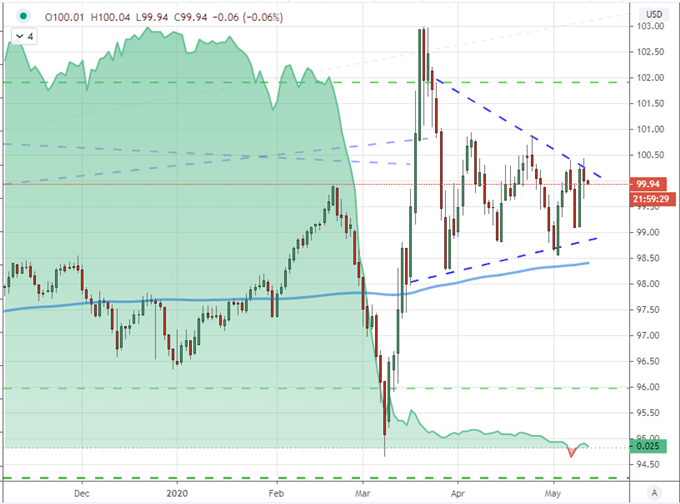 While themes carry the most potential in my book, I do not neglect scheduled event risk for acting as a fundamental lightning rod. Given my attention to negative rates in the US and laundry list of Board members talking against negative rates, the Fed Chairman Powell remarks scheduled ahead will be a top billing for me. That will be a consideration for both ‘risk’ traders in assets like global shares and junk bonds as well as those interested in the Dollar pairs. Another set of key events is the monthly OPEC event and RBNZ rate decision. For the former, energy prices have steadied after the unprecedented negative flip last month, but that is a stability loosely held by very unclear supply/demand factors. As for the rate decision, the Kiwi has some remarkable technical patterns, but will the further loss of ‘majors’ status for the currency offer the systemic picture necessary to upend tight congestion? 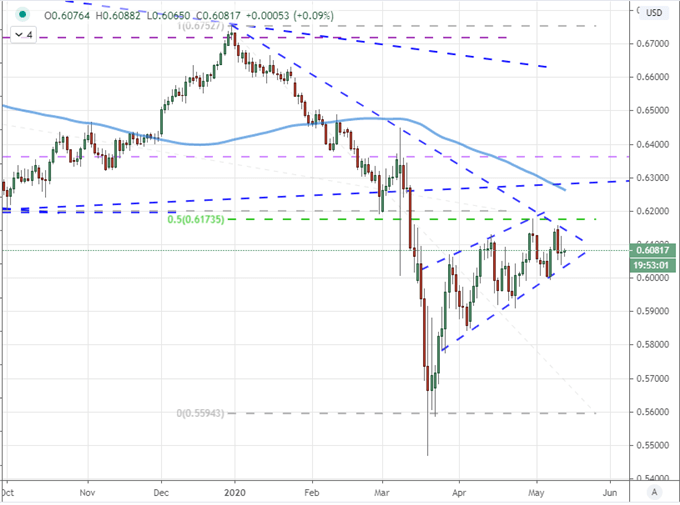 For sheer concentration, the UK docket is Wednesday’s most potent mix. There is a range of data due for the month of March through the session. The top listing though will be the 1Q GDP release. The monthly updates by the government will cool the impact of the broader update – despite how important it is on a big picture perspective. Yet, not all is disarmed. Later in the session, the NIESR April GDP estimate will hit the wires. This will the more informative release and can be amplified by the official figures due hours before. Watch the Sterling pairs, but I’m more partial to EURGBP and GBPUSD. 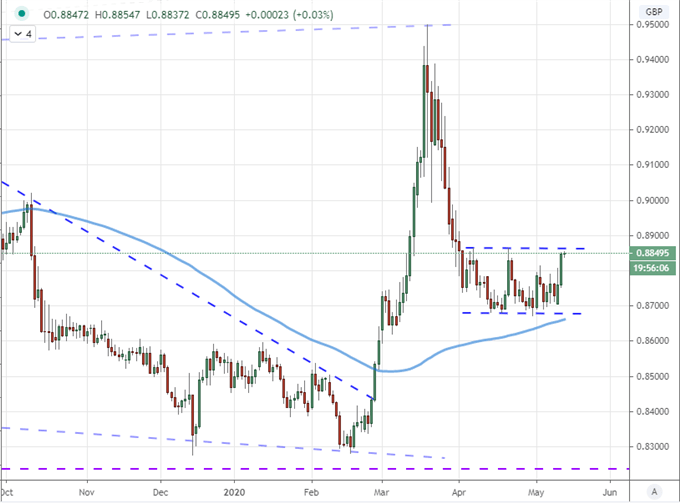