Risk Appetite Is Up but Unmotivated Into the New Week

Sentiment ended this past week on a favorable footing – yet the black-and-white sense of ‘risk on’ still lacks for any depth of conviction. That shouldn’t surprise against the backdrop of the severe recession that we’re reminded of so frequently these days. Teasing speculative interests through the end of this past week, there was a notable bid in broad range of risk-benchmarks I follow: global indices, carry trade, junk bonds, emerging market assets and more. The balance of power is reflected well in the S&P 500. The broad US index enjoyed a notable gap higher Friday to stretch the ‘right shoulder’ of a head-and-shoulders pattern and earn a robust weekly performance. And yet, the chart remains firmly bounded to the band created by the 50 and 61.8 percent Fibs of the measures extraordinary March range. 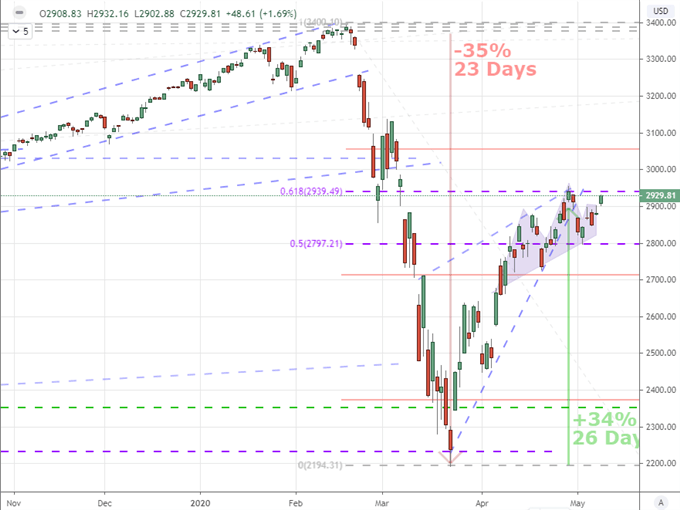 Sentiment is a powerful influence. Risk appetite (greed) can prove an incredible force in speculative circles, but there are limits to its capabilities. We may very well see those restrictions on display over the coming week. There is just as likely to be ‘better than expected’ event risk ahead as a disappointing run. However, we should consider what such a scenario would be able to generate in terms of traction. I am of the belief that fundamental ‘beats’ will translate into significantly smaller moves from the market than equally-measured disappointments. That would fit the balance of our prevailing fundamental health. To end this past week, the world’s largest economy reported an incredible 20.5 million net loss in US payrolls. That wasn’t as severe as the 22 million loosely forecasted, but it was still a record-breaking loss. Meanwhile, the New York and Atlanta Fed have forecasted a stunning -31.2 and -34.9 percent 2Q contraction for the current quarter. It is understandable that climb would be capped while slips could readily turn into a tumble off the cliff. 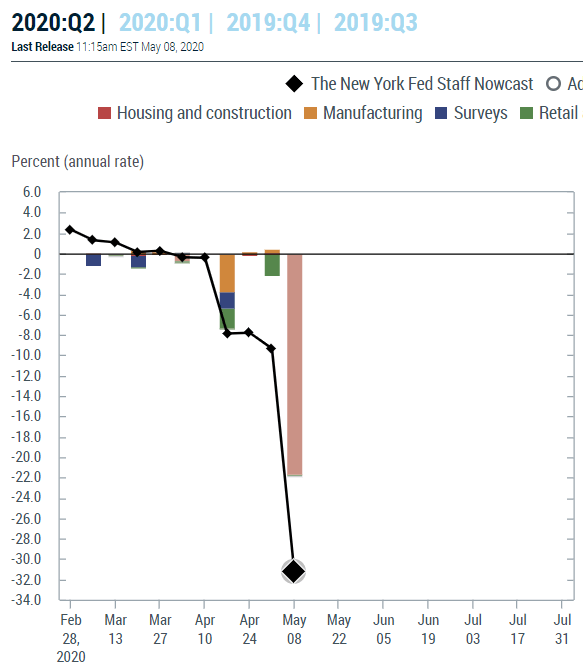 Growth and Stimulus Updates Due Over the Coming Week

Looking out over the trading week ahead, I will maintain my appreciation for the skewed potential for fundamental updates that impress versus those that disappointment. On the systemic side, the economic growth perspective has its range of listing to digest. The US retail sales and NFIB small business sentiment survey is one level of event risk. Far more provocative ahead are the first readings of certain 1Q GDP readings: particularly those from the United Kingdom and Germany. Ultimately, my interest is more anchored to the stimulus side of the equation. The ECB’s ability to raise its efforts to ward off fear of financial fissures is a serious risk after the German court ruling, but the EU’s top court is challenging the threat. Clearing this hurdle is important given reports ECB staff has been charged with looking into asset purchases of so-called ‘junk bonds’ like their peer, the Fed. In the meantime, expectations of the Fed being pushed into negative rates has taken a life of its own. 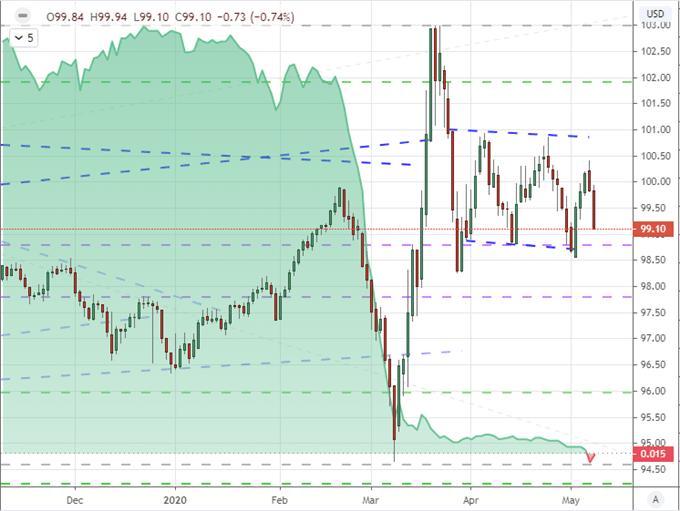 The December Fed Fund futures contract’s implied interest rate flipped negative this past week for the first time ever. Against the backdrop of potentially-unprecedented recession, this expectation is not exactly out of the realm of possibility. That said, there is a psychological pressure at work here. Is the market simply reflecting on its expectations from the world’s largest central bank given the backdrop or is it pressuring the group to offer more support ‘or else’? Meanwhile, where are we to look as the world’s largest central banks take further steps into unprecedented accommodation. If the Dollar, Euro, Pound and Yen are easing due to stimulus, there are few alternatives. There remains a grass roots interest in Bitcoin and crypto, but the financial system ‘old hands’ still show preference for gold. In fact, the precious metal’s correlation to the December Fed Fund futures contract is quite impressive. 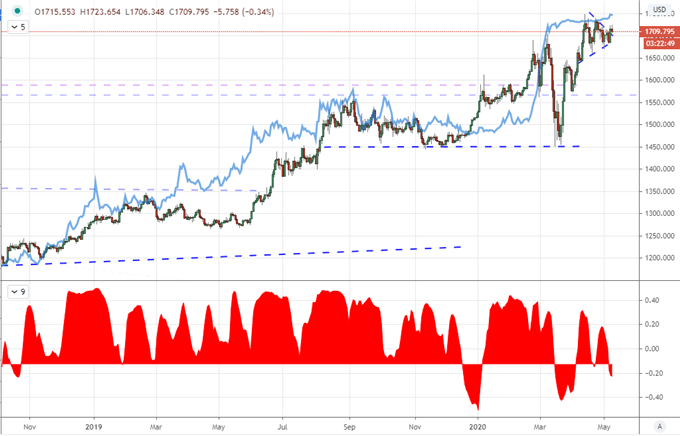 Looking ahead to the coming week’s scheduled event risk, there is a lot to monitor. The Fed Chairman’s talk may touch upon negative rate speculation, the Chinese monthly data run will speak to timely growth potential, UK and German GDP will tap key European economies’ health and the US consumer confidence survey Friday will be important to watch for response to April’s overwhelming employment report. That said, I’m going to be particularly observant of the central bank rate decision on tap. The RBNZ policy update isn’t hosting high probability of further easing, but the market isn’t well positioned if the group offers tangible dovish progress. I’ll be watching NZDUSD and AUNDZD in particular for this purpose. 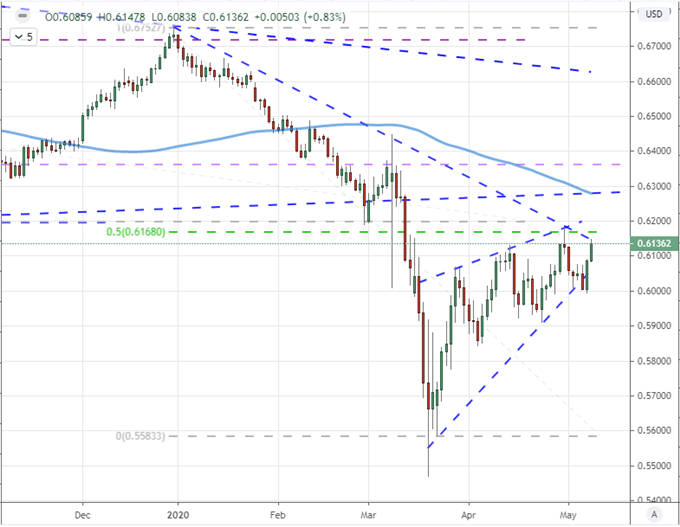 The other major central bank rate decision on tap this week is the Bank of Mexico’s update. Unlike the RBNZ, the Banxico is expected to hike its benchmark rate by 50 basis points. Will that top the bleeding of the Mexican Peso? USDMXN slipped its well-established range this past week thanks in large part to the drop from Dollar. There are bygone growth, carry and trade war implications at work with USDMXN. With last week’s technical break, speculators will be on high alert, but mind the probabilities. A 50bp rate hike is the economist forecast. 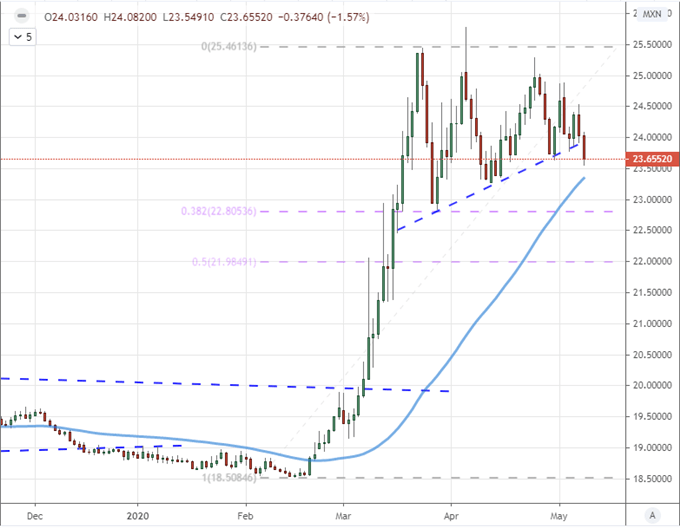