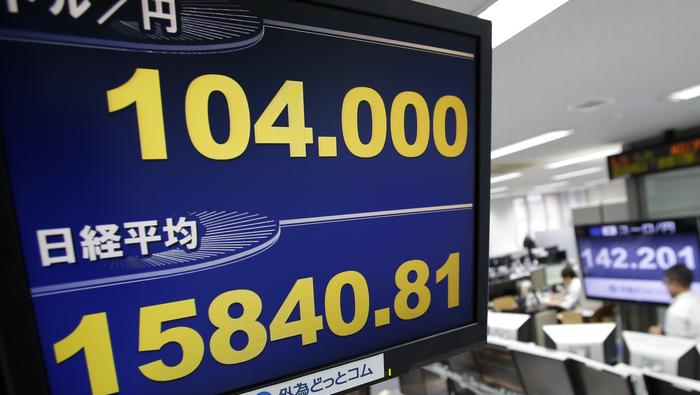 In the hierarchy of fundamental influences that can urge systemic moves in the financial system, the drive in collective risk appetite (fear or greed) is one I consider to have the greatest and broadest influence on the market. When speculative appetite is charging or collapsing, keeping track of momentum and motivation seems significantly easier. Conversely, when that drive starts to ebb, the evaluating potential in the market can be more difficult. My preferred measure of sentiment is the status of correlation across a range of popular but disparate speculative benchmarks. Yet, it is perhaps easier – though less reliable – to reflect on a particularly representative standard. The S&P 500 represents the fickle mood well. This past session, the day started with a gap higher but then ended with a retreat and bearish close. So soon after the break of a rising wedge, it looks like we are establishing a head-and-shoulders pattern. Yet should we expect a more violent and productive resolution than last week’s break? 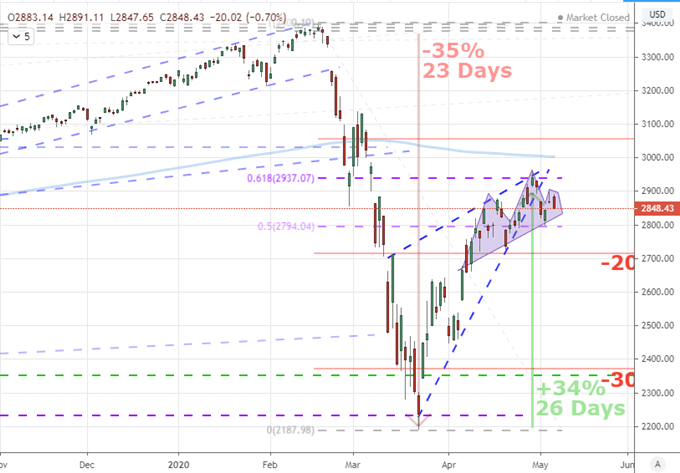 There are plenty of technical patterns across the markets that may be held up as the precursor for a dramatic resolution: breakouts and reversals for example. However, the potential in these more high-tempo developments requires a market backdrop whereby the chart cue will either generate enough interest to self-fulfill or alternative a fundamental spark would need to coincide with the break. We don’t have particularly clear conditions, so I’m eying markets that are attempting to forge a break now with a little more skepticism. USDJPY is a good example of a short-term technical breakdown, but clearing the midpoint of March’s range may take a different perspective with this consideration. USDBRL is somewhat different as it pushes to record highs (not really seeing much response to a 75 basis point rate cut), but it too is running against a restrained market. 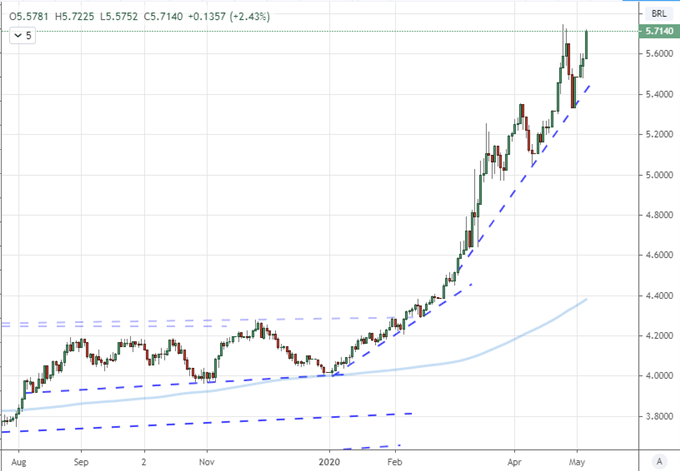 In contrast to technical moves attempting to overcome the market’s speculative buffers, ranges seem to be more appropriate given conditions (see our educational section on devloping a strategy). Of course, congestion against the backdrop of high implied volatility needs to be weighed carefully. EURUSD is such a range with the recent leg lower on a bearing which would align with a likely break against the favor of risk or the Euro with its troubles. On the emerging market cross side, USDMXN is carving out a very active range and again a sudden deterioration in risk trends – more likely to carry severe impact with fear than greed – supporting the prevailing trend. 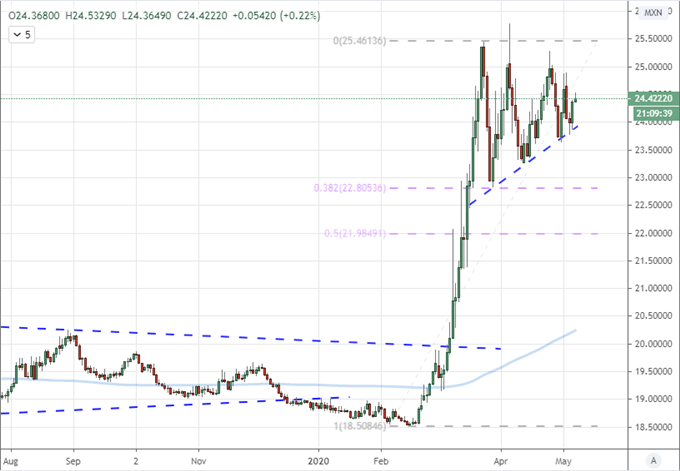 While market conditions ultimately act as a critical authority on assets develop and headlines impact price action, the themes and event risk should be monitored closely in the event speculators start to look for reasons to fuel their confidence or pessimism. This past session, recession was once again a familiar talking point. The European Commission released its growth forecast – a -7.7 percent slump that is quite severe. The US ADP private payrolls release meanwhile reported a staggering 20.2 million jobs were lost in April. That does not bode well for Friday’s NFPs. Another smattering of PMIs showed serious issues, but I was watching the Markit/JPMorgan global composite which (unsurprisingly) collapsed. A deep recession is coming. Are the market’s properly reflecting that? 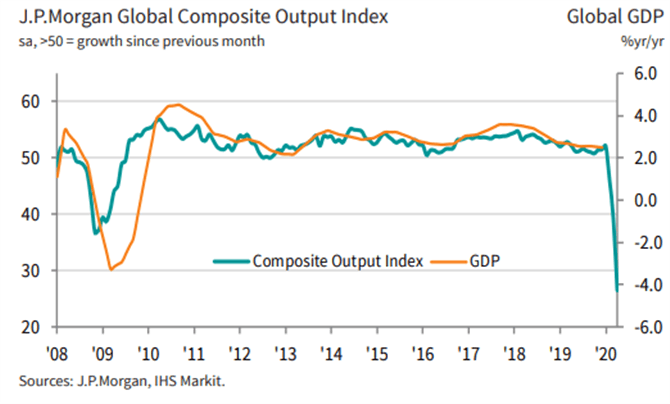 Chart Created by JPMorgan and HIS Markit

Some Key Event Risk for the Euro and Pound Ahead

The Euro has taken a dive this week, and there is good fundamental reasoning for this downdraft. The ruling by the German court that the ECB’s asset purchases over the past five months has to be justified raises a serious risk that future crisis fighting may be virtually impossible. It is likely that another wave of support is going to be necessary given the limited PEPP effort (750 billion euros), and the European governments are constantly running into problems for a response. That recognition should make for an interesting review of the ECB’s annual report later today. While I’m dubious of high profile technical breaks, EURJPY has risk and monetary policy factors converging and it is pushing lows not seen since November 2016. 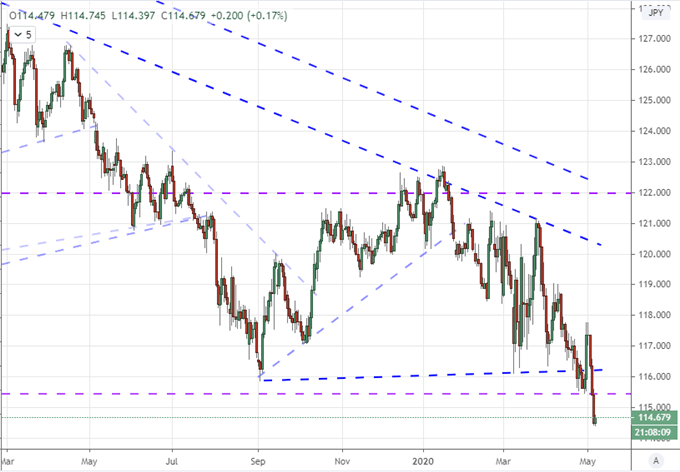 The most obvious high profile relief in the upcoming session is the Bank of England’s monetary policy update. The central bank could very well issue another change to its already accommodative – but comparatively reserved to its peers – policy mix. More stimulus is a familiar decision in the community, but the market hasn’t been particularly responsive to such changes recently. I will therefore be paying as much attention to the forecasts in the quarterly inflation report (with economic forecasts) and the financial stability report coming out in the deluge. GBPUSD has bled off momentum since Brexit negotiations were outshown by sheer risk. These two themes could very well converge though. 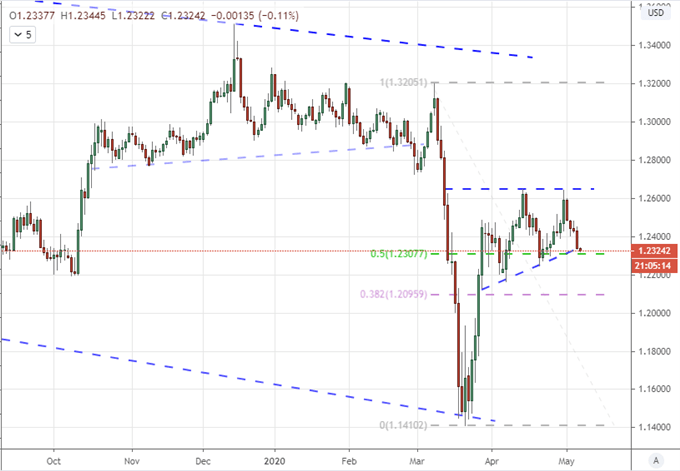