There was a noticeable curb on liquidity through the close of this past week with many countries’ exchanges closed for their respective ‘labor day’ or ‘May day’ holidays. As curtailed as global markets may have been through the end of the week, that didn’t seem to prevent the spark of speculative intensity that closed out our week with an acute course of risk aversion. The S&P 500 – my preferred, imperfect ‘market’ benchmark – suffered an obvious and potentially systemic breakdown through Fridays session. With the final day’s gap, the US index cleared a technical support break of a five month recovery phase. It would be presumptuous indeed to call this a definitive break, but the weight of this particular index and the clarity of the pattern can generate its own self-fulfilling follow through. 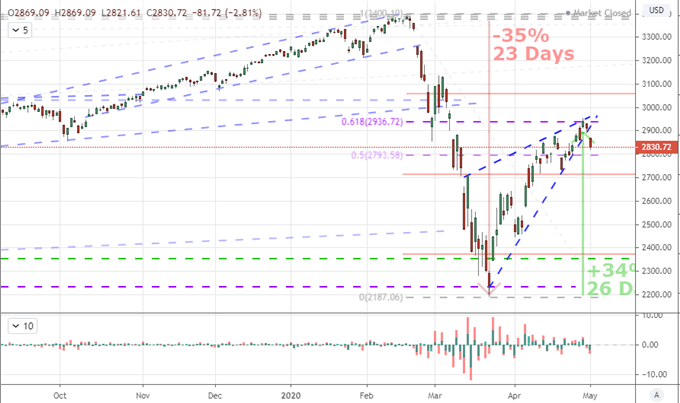 With this tentative break, I have taken a fresh look at my poll initiated before the technical move was made asking whether participants believe the S&P 500 – as a barometer of sentiment – was forging a genuine recovery after ‘V-bottom’ or biding its time with a correction in a prevailing bear trend. Despite a decade of habit to default to complacency, the balance of anticipation in my survey showed approximately 80 percent of the over 150 participants believed the rebound was temporary. Speculative bearing is the end result to much of our fundamental evaluation. In most cases, thematic sparks like recession, financial disruptions or other systemic issues are mere sparks to the shift in current that most of us recognize in market movement. That said, I would not label Friday’s close as a reliable risk aversion switch that will naturally carry over to Monday trade. 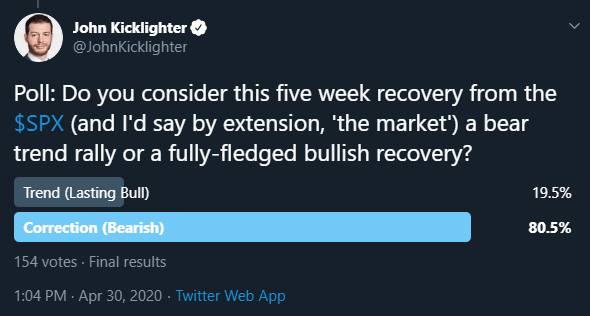 Moving into the new trading week, there remains a distinction between the scheduled and unscheduled event risk at play. On the latter point, we have the natural inclination of a speculative herd throwing its conviction behind a speculative view that often rises above the catalyst itself. In the abstract category, the 1Q earnings season carried a little bit of weight. The Amazon and Apple – two companies that are FAANG members but more overt bridges between tech and growth – earnings after Thursday’s close clearly didn’t rouse optimism into end of week. Even headlines that the FDA had authorized emergency use of Gilead’s coronavirus drug didn’t seem to end us off on a strong footing – though to be fair the news came 15 minutes before the close. Perhaps the abstract risk-aversion news that the US was holding out a threat of tariffs against China in retaliation for the spread of the virus carried more weight. With the Presidential election six months out, it is reasonably to believe this pressure can rise materially. 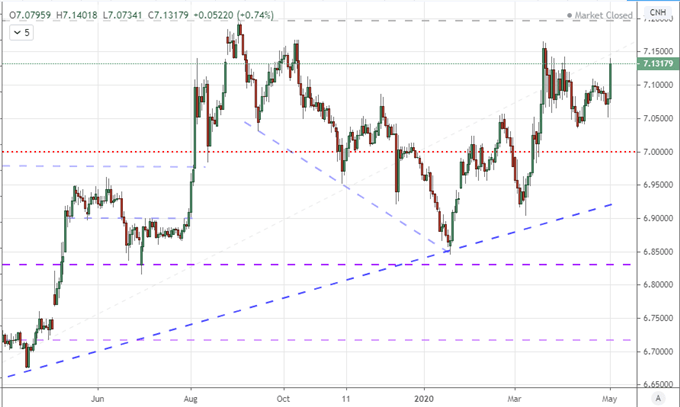 For the more ‘routine’ economic themes, the push and pull of recession against a committed stimulus drive remains a fundamental tipping point. This past week, the intensity of the global economic contraction was made blatantly clear between the US -4.8 percent contraction and Eurozone’s -3.8 percent slump. What is perhaps even more troubling is the recognition by market participants that the 2Q update will be significantly more intense. The New York Fed’s estimate for the current quarter was lowered to a forecast for -9.3 percent contraction while the Atlanta Fed’s own projection called for a severe -16.6 percent collapse. That is not an uncommon escalation across the globe. Meanwhile, stimulus is not yet spent with headlines suggesting House Speaker talking about a fresh $1 trillion stimulus iteration and incoming BOC Governor Macklem saying negative rates are on the table. 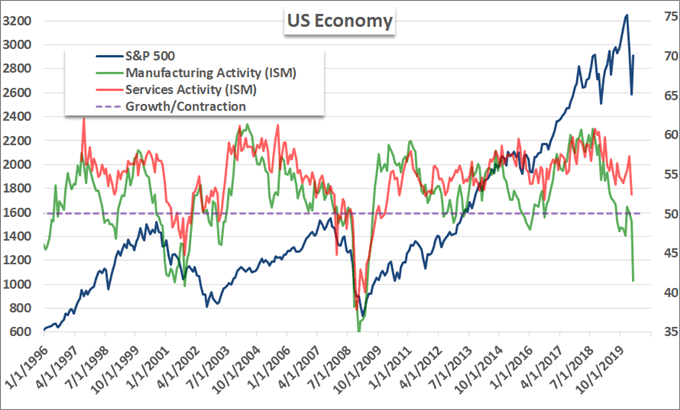 Looking ahead to the new trading week, I wouldn’t spotlight anything in particular as having the heft of representing a systemically important economic update. For an economic perspective, we have the explicit report that is the Hong Kong 1Q GDP release and the more symbolic-of-growth reading in April US NFPs. Of the listings on tap though, I would give the greatest weight to the US service sector activity report from ISM. The largest sector for output (approximately 80 percent) from the world’s largest economies naturally holds exceptional weight. As for the scheduled stimulus wave, only the Reserve Bank of Australia (RBA) and Bank of England (BOE) are scheduled for regular updates. The Australian Dollar is arguably more exposed after its past month climb, but the BOE’s Quarterly Inflation update may prove more loaded for the Sterling. 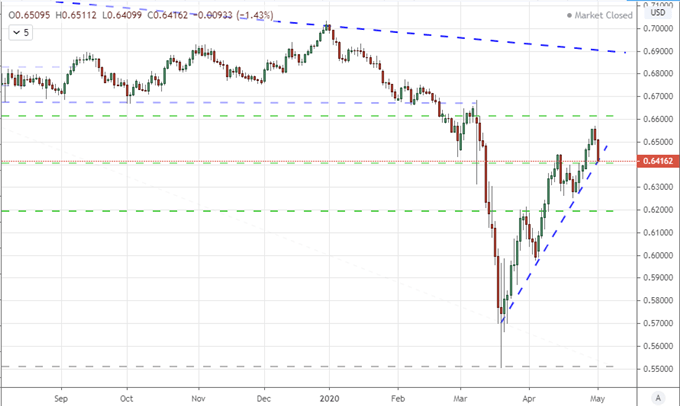 On the more systemic level, I will be watching developments like the Dollar’s six-day slide through Friday and the S&P 500’s technical breakdown, but these are not the only telltale measures on tap moving forward. Gold for example holds an inordinate amount of speculative weight in my book. Despite the climb in risk assets since March 23rd, we have seen the safe haven metal climb or hold generally steady. Where is this appetite originating? Gold enjoys a unique caveat among risk averse measures in that it also enjoys a historical role as an alternative to traditional currencies – currencies that have seen their value slide as stimulus efforts have soared to new records. 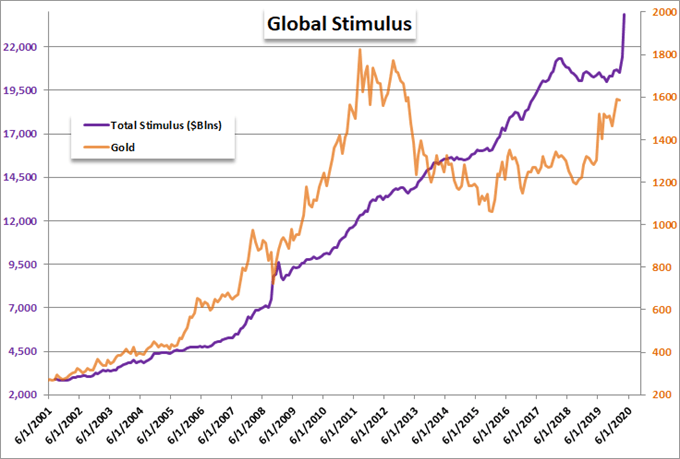