Dollar, Dow and FAANGs Top Markets as Fed, US GDP and Earnings Due

A Swell in Risk That was Capped During the US Session

Overall, the compass setting on risk trends this past session was heading in favor of the bulls, however the thread was lost by the time the US session took over. Looking at the technical patterns in risk-leaning assets aligned to the different time zones, we were met with an interesting progression of speculative effort. Japan’s Nikkei 225 advanced yesterday but didn’t put in for what I would consider a ‘clean’ bullish break. The European benchmarks on the other hand signaled something more akin to what you see in technical textbooks. The UK’s FTSE 100 in particular earned a solid 5,850 clearance. Yet, when it was time for US traders to take over, the opening adjustment in a meaningful bullish gap is about as far as the enthusiasm would go. After the charge, the market proceeded to retreat and ultimately close in the red. Above the modest close-to-close move, my concern is more aligned with motivation. 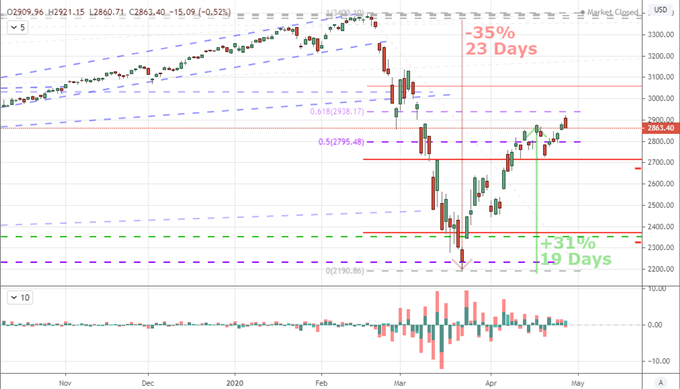 It is helpful to continue to evaluate the transmission of sentiment as a global affair – both in terms of geography and asset types. As we head into Wednesday’s Asian and European sessions, the retreat from the previous New York session will disrupt any serious momentum that was building. Further, anticipation for key event risk further into the next US session will likely divert any serious conviction that would otherwise catch traction. 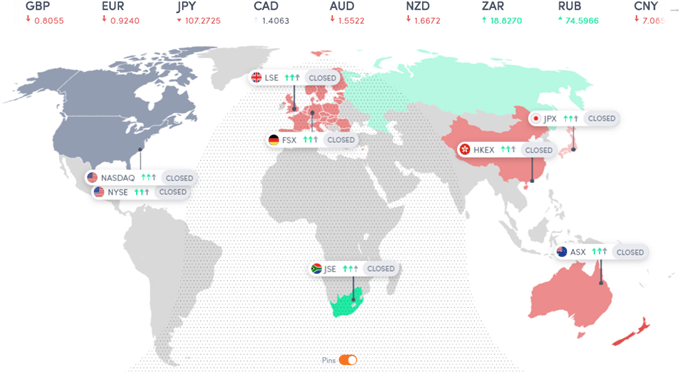 Scheduled event risk continues to compete with the more abstract fundamental view the crowd is fostering. On the docket this past session, the US consume confidence survey from the Conference Board was a top listing with a headline figure that marked the most severe drop on record to the lowest overall reading since 2014. The details though offered up a six-month forecast that actually improved over the previous month (to 93.8 from 86.8 in March). Scheduled event risk, in my view, works best when it adds momentum to a prevailing perspective. This was reversing the chief concern. The unscheduled view of the crowd has done something of the same. Recognition – and fear – of an extraordinary recession remains an over-riding issue, but there is a growing interesting in offsetting factors: from stimulus to the slow re-opening of economies as can been seen in Google search interests in the US.

Graph of Google Search Interest in ‘Recession’ and ‘States Reopening’

The Heavy-Hitting Fundamental Event Risk Ahead

There is a lot on the docket for the second half of the coming trading week. One theme that is particularly good at weighing the economic impact of the pandemic and hitting speculative interests at their core is the US earnings schedule. This past session, we were met with a troubling mix that goes a long way to filling in the incredible staying power of speculative enthusiasm. The economic health related Caterpillar and Ford issued performance updates for the past quarter which were troubling but forecasts that were even more unsettling. Meanwhile, FAANG member Google missed its EPS analyst target; but remarked that it was doing well during the lockdown. It is this contrast of hope in the tech sector that was a key separation over the past decade and continues to highlight over-indulgent speculative views. I will monitor the FAANG (and the Nasdaq as a proxy) relative to the broader measures like S&P 500 or blue-chip Dow moving forward. 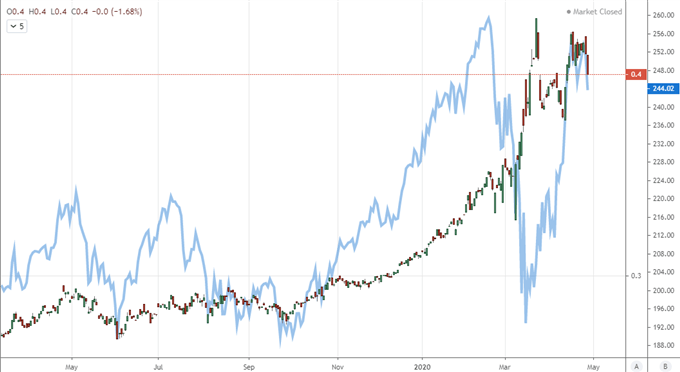 Another key event on tap over Wednesday’s session, is the direct-to-conviction update from the US 1Q GDP release. As it happens, this is as all-encompassing of the risk we are eyeing moving forward as we can get. That said, this is also a clearly delayed figure. The real impact from the forced economic shutdown is expected in the second quarter. Nevertheless, this sets the tone. My concern here is that this indicator alongside the growth leaning earnings updates today (GE and Loew’s) are due before the NY open. Timely growth readings will slowly sprinkle out over the next week while the earnings punch will be Microsoft and Facebook after the close. 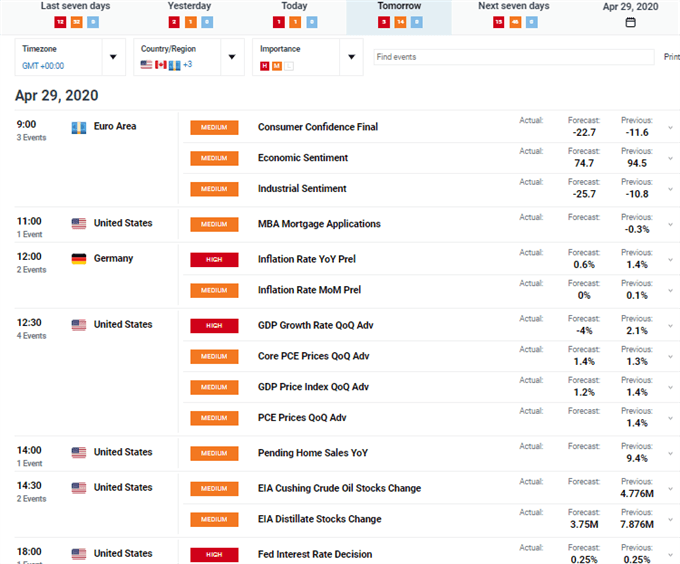 I put to Twitter what they believed the top event risk in the US session would be between earnings, US GDP and the FOMC rate decision. As it happens, the majority of participants expect the policy meeting to be the most market moving event. That could prove difficult to live up to. Beyond the fact that the US central bank has essentially lowered its benchmark rate to zero and is already deep into unorthodox policy, they have more specifically been moving actively outside the course of their normal meeting schedule. Over the past few weeks, they have taken moves to support ‘main street’ (lending to programs like PPP) and ‘wall street’ (a portion of the $2.3 trillion in financing to support investment grade bond purchases). They can move again here, but it would not be more influential than what they have done recently and isn’t promoted by need. Then again, if it is expected, not moving can disappoint. 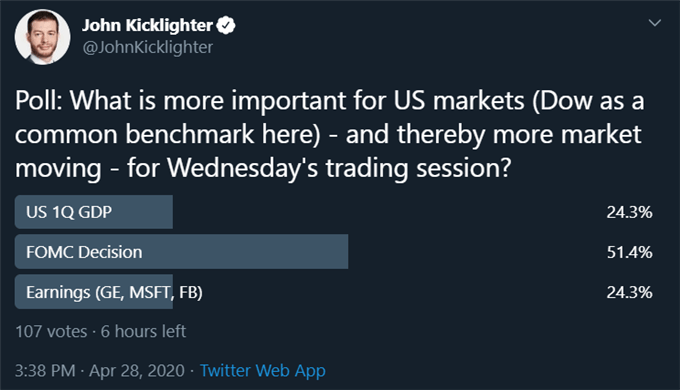 While many will fix on the next high-profile event risk on tap when plotting out their expectations for volatility and recharting direction, anticipation is not isolated to a single event. Updates are mostly fleeting with an efficient – as far as speculative masses can be (learn more on trading psychology here)– market adjusting to the news quickly. The US-based event risk is a stretch of scheduled releases through the session from pre-open (earnings and GDP) to active session (FOMC) to post-trade (earnings again). Further ahead, we are due more international headwind; in particular the Eurozone first quarter economic update and the European Central Bank (ECB) rate decision. This second largest aggregate economy is in a more troubled position on both fronts, so it would not surprise me if global sentiment were to await confirmation of Thursday’s updates before full conviction were established. 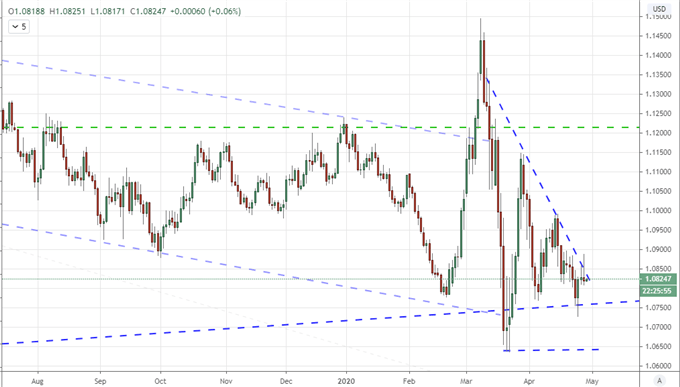