Dollar and S&P 500 Lead Even as Risk Slides, US Reopen Guidelines Top Focus

A Tip in Risk Trends but Was it Retail Sales Pushing?

Sentiment took an unfavorable jog through Wednesday’s session. Checking across the progression of Asian to European to North American active hours; the bearish tone was on display throughout. That suggests that while there were significant fundamental developments this past session, they were building on ‘risk off’ rather than offering the spark to that reversed course. For my preferred, imperfect measure or investor sentiment – the S&P 500 – a 1.8 percent gap lower and 2.2 percent decline from the previous day were both the worst showing since April 1st. That said, the slide doesn’t reflect a technical sea change, nor do underlying conditions (volume and/or liquidity) support anything systemic. 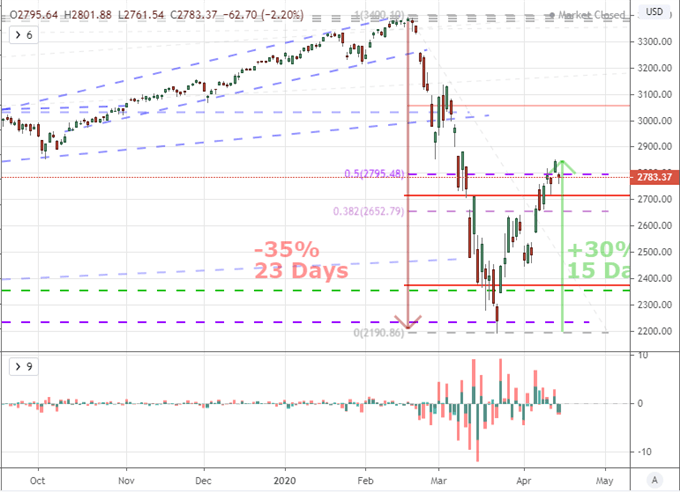 Fundamentals on the other hand can be used ready explanation for virtually any bearish performance that arises. This past session’s docket offered an abundance of unfavorable event risk. That said, the bulk of the tangible headlines came out of the US. On the macroeconomic side, US retail sales for the month of March dropped a staggering -8.7 percent for the largest single-month collapse since records began back to 1992. Adding to that backdrop, the New York area manufacturing report hit its own record low (-78) while the usually-ignored Fed Beige Book reflected on a troubled backdrop. Earnings was another feature with Bank of America and Citi reporting a -45 and -46 percent drop in profits respectively with warnings around forthcoming defaults.

President Trump Hints at Reopening Parts of the Economy Soon

In the upcoming session, there is a range of scheduled event risk in both data and reports that can fuel any fundamental-based runs. That said, my principal focus will be on the US President’s planned announcement of guidelines for reopening the economy. Trump has voiced concern over the impact of the forced shutdown and opined that ‘the cure cannot be worse than the disease’. In his briefing Wednesday, the President suggested that some states may open before May 1st, implying that his administration will take a more progressive approach to easing the lockdown to recharge the world’s largest economy. What kind of economic impact this has will depend heavily on whether there are subsequent waves of infection ahead. That said, speculative appetite frequently jumps ahead of official statistics and the Dollar has seen its absolute haven status pick up some relative investment appeal as a leading candidate for growth and thereby investment. 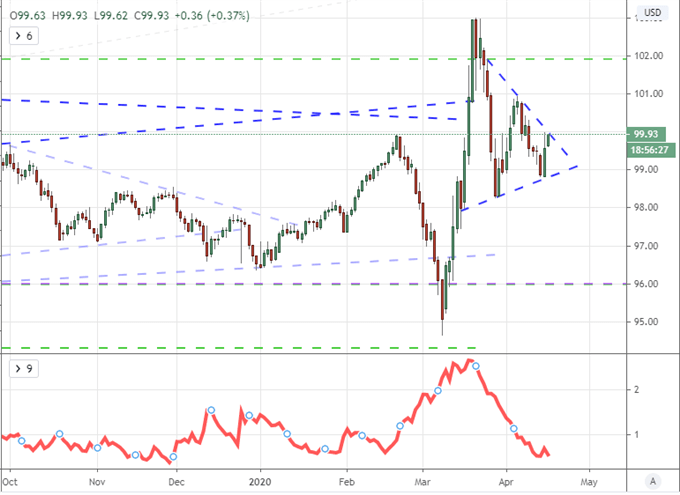 Outside of the US event risk – including important initial jobless claims – there is a range of high profile fodder through which to generate volatility and perhaps even momentum. This past session, the Commodity Bloc (Australian, New Zealand and Canadian Dollar) were all under pressure. The Loonie in particular was loaded between a flash monthly GDP report and the Bank of Canada (BOC) rate decision. For the month of march, the country contracted a record-breaking -9 percent which would set a tempo for a -2.6 percent quarterly slump. Furthermore, the central bank while the central bank held rates, it announced its first foray into traditional-unorthodox monetary policy with up to C$60 billion in possible debt purchases. This news saw the currency slide, but not to the extent that some others have dropped faced with similar data. 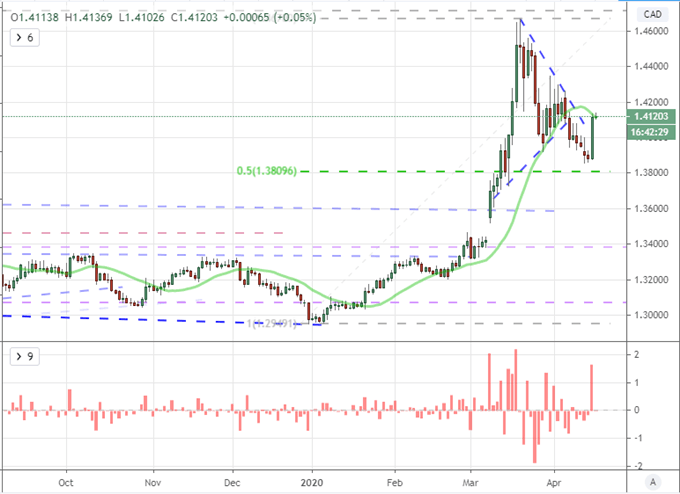 Oil is another market facing great consequence. This past session, adding to the previous news that OPEC+ members were aiming to cut daily production of the precious commodity by 9.7 million barrels per day, it was reported that the US was considering paying local energy producers to not add more supply to the system. Despite that and IEA estimates that demand would drop by ‘only’ 9.3 million barrels per day in 2020, the commodity would still struggle to regain any foothold. 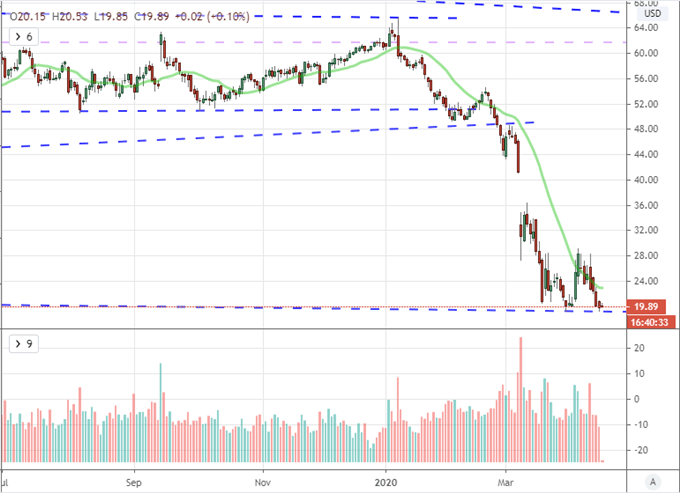 Looking for further event risk over the coming session, the Australian employment statistics are high profile enough. Europe will find the EU finance ministers discussing actions aimed at offsetting the scourge of the coronavirus-driven recession. Another interesting update will come from the Bank of England’s (BOE) credit conditions report. After the IMF’s WEO and GFSR statement, this update is unlikely to be favorable, but the bar is so low that disappointment may not drive clear Sterling selling pressure.