Though there was significant financial market liquidity through Monday – including the US and Japan – we have just closed out the first full liquidity day of the week this past session. Remarkably, risk appetite managed to prevail through the session despite very prominent fundamental warnings sign raised by the IMF. For those watching monitoring risk through the progression of the trading session, Asia carried the baton of uneven risk appetite Tuesday morning but Europe was far more uneven. US afternoon trade revived the latent enthusiasm to post gains on top of the bullish gap for the likes of the S&P 500 and Dow. One point of contention is the disparity in volume. Generally speaking, a retreat in turnover is natural alongside a slide in VIX, but heavier volume backing selling efforts versus those shares on bid suggests underlying caution in the global rank. 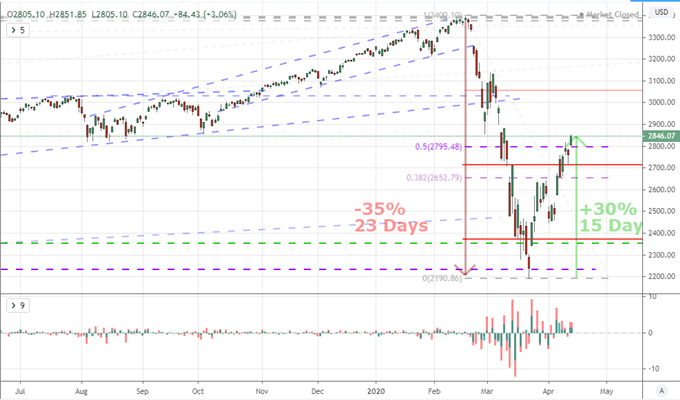 For the bigger picture, risk-leaning assets were similarly on uneven ground. Assets that are share the ‘risk’ category with indices have presented uneven performance. Consider the lack of traction for junk bond-based ETFs in the US (HYG and JNK) despite last week’s news that the Fed was expanding its liquidity program to include purchases of previously-untouchable markets. Reminding me of the situation at hand, the IMF released its Global Financial Stability Report (GFSR) which signaled the concern that has already circulated the system. The group noted that several factors amplified the market’s tumble in March including ‘overstretched asset valuations’. The warning for conditions moving forward should resonate loudly with those that have a memory that stretches back more than a few weeks. 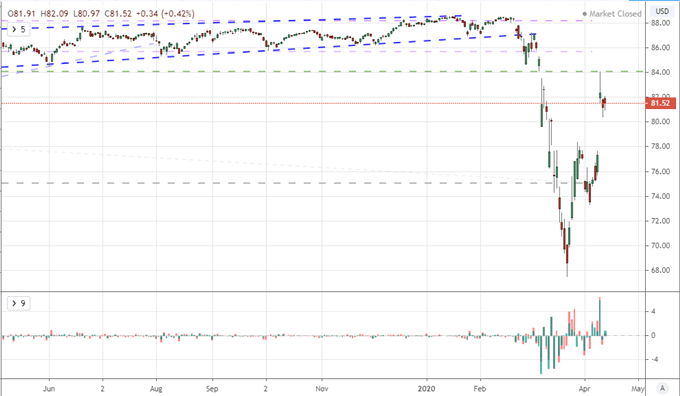 Of the evaluations and forecasts the IMF was issuing this past session, the World Economic Outlook (WEO) was the most readily acknowledged reading. As was expected given the overtly dire circumstances for the coronavirus with Covide-19 spreading across the globe, the group projected a severe recession through 2020. The -3.0 percent slump for the world this year would represent the worst bout of economic fallout since the Great Depression. Further, the largest individual members of the world stage are facing severe retrenchment of their own including the United States (-5.9 percent); Germany (-7.0 percent); the United Kingdom (-6.5 percent) and Japan (-5.2 percent) .What perhaps offers some measure of comfort for those struggling to grasp the implications of just how painful the immediate future will prove is the reversal projected through 2021. Though, the IMF has admitted that the further projections are far less certain given the circumstances of the pandemic control and preparation for reopening economies.

Table of Economic Forecasts from IMF 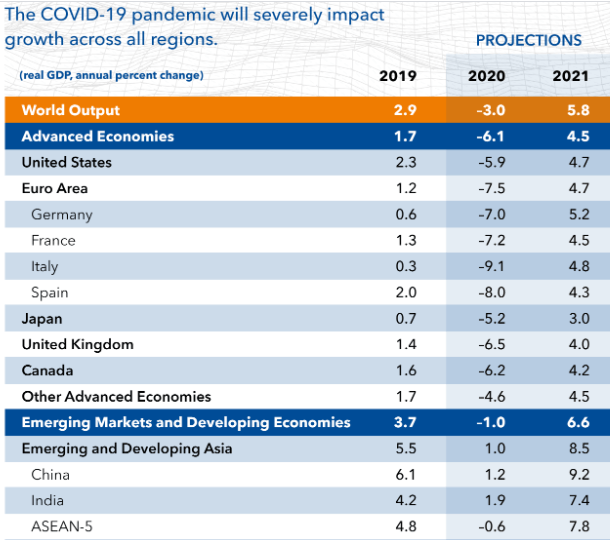 Optimism further beyond the horizon can play a role in balancing otherwise unchecked fears. Another aspect of this equation is the discount afforded to downgraded forecasts. An accessible example of this scenario is readily read in the US earnings season. This past session, their were outright improvements in corporate data like Johnson & Johnson’s $2.30 adjust earnings per share update, but that was the exception to the rule. More common was the -69 percent drop in JPMorgan profit and -89 percent collapse in Wells Fargo’s own main statistic. As severe as that may be, the market was perhaps expecting that degree of pain or even more. Hence, after the troubling data, the markets were unrelenting in their slow lift. Speculation can play a remarkable role in market performance. That said, Goldman Sachs, Bank of America and Citigroup are due to report Wednesday. 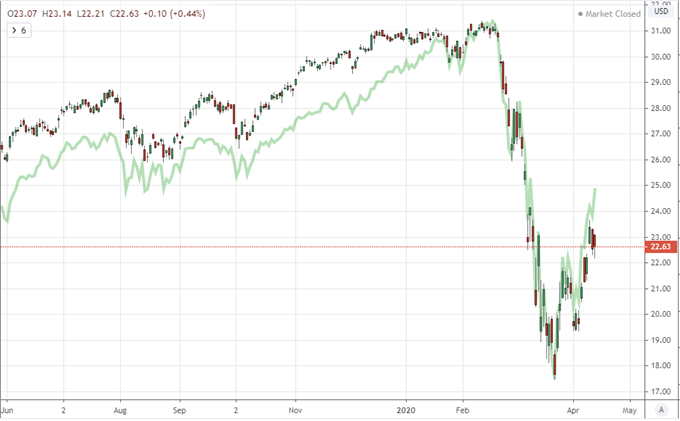 While the headlines express recession issues and capital markets attempt to leverage risk trends, my evaluation of what lies ahead remains on the high probability that constant reminders of economic retrenchment are ahead – whether or not the market discounts the risk thoroughly or not. Alternatively, as sentiment tides work their comprehensive influence, I remain cognizant of a return to effectiveness of stimulus. The world’s largest central banks and governments continue to push capital into the system which is generally attempting to inspire calm and speculative appetite a the global level. Yet, the further markets settle, the more the scales of nuance will come into play. 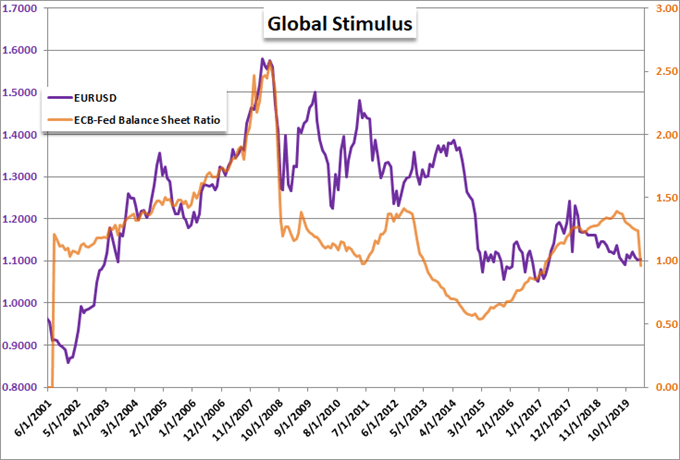 Chart Created by John Kicklighter with Data from Blomberg

One particular highlight in monetary policy this past session was from the South African Reserve Bank (SARB) which unexpectedly announced a 100 basis point rate cut. Such a severe move from the group undermines the carry appeal of a higher risk, emerging currency; but USDZAR didn’t see its climb fully unleashed on the news. I suspect similar second guessing will follow the Bank of Canada (BOC) decision due over the coming session. What’s more, rate potential has had limited corollary to USDCAD price action for the past months; so there is little reason to suspect it to sudden snap back into place. 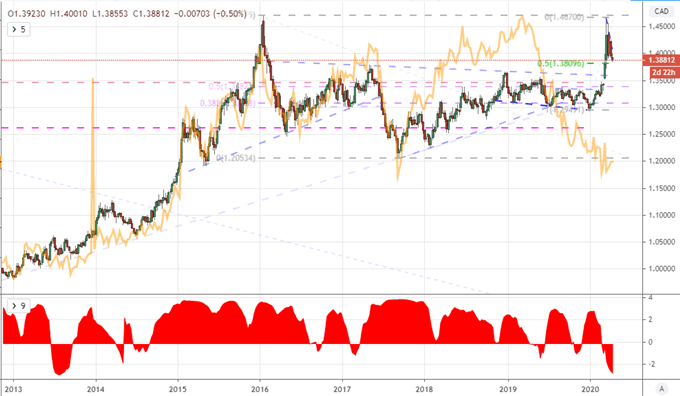 Ultimately, monetary policy still strikes me as an aggregate influence on the global markets as a reinforcement to an unstable backdrop. Yet, amid that firefighting, there will be an eventual return to second guessing value established in a market flooded by external support. As risk aversion lingers but the reality of devalued fiat assets sinks in, gold returns as a key reading. Though a safe haven, it didn’t fare well during the peak of financial liquidation in March as capital sought out sheer liquidity. As that blind fear eases, nuance will highlight the slide in relative value from assets priced against currencies artificially deflated. In that scenario, gold is a familiar fallback. With the extended run to multi-year highs and easing of derivative spreads, this precious metal is worth cross referencing. 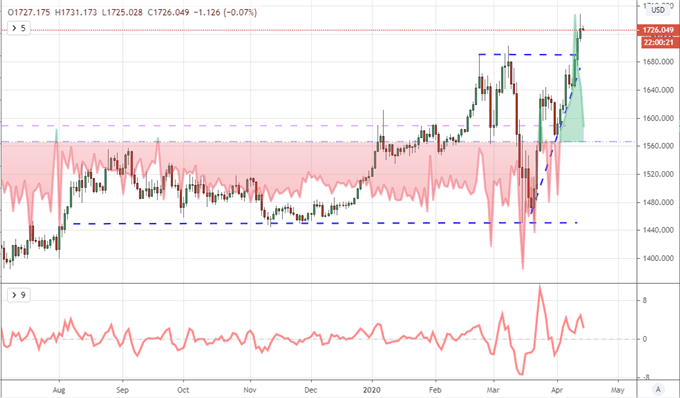