The Hope In Their Eyes

There was a broad rebound in risk-leaning assets – and commensurate retreat in havens – this past session. The favorable wind for sentiment did not find deep systemic traction, which ultimately marred the enthusiasm that could have taken traction; but most market participants are nevertheless happy for any reprieve at this stage. Sentiment took traction across the market, but there are few places where the speculative traction is more significant than with the US indices. The Dow and S&P 500 would put in for a relatively restrained close-to-close advance, but it was nevertheless a rally. That represents the first back-to-back climb for these benchmarks since February 6th. What’s more, the 2-day rate of change over this period was the most impressive since the period that followed the 1987 crash. 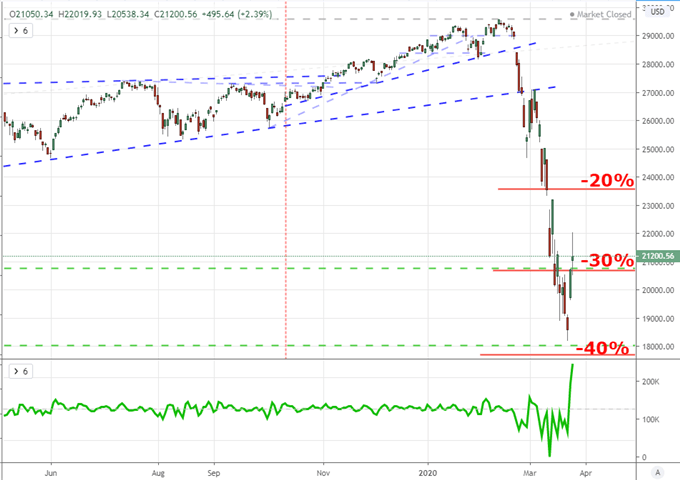 A two-day climb of such magnitude will naturally draw a lot of attention from the long-only crowd that is seeking a handhold for hope. It goes without saying, hope is not a strategy. Risk appetite has been driven by anticipation of the next step in a steadfast global stimulus escalation. The United States Congress supposedly approved a coronavirus stimulus program worth more than $2 trillion, however, by Wednesday’s close, the details were still up in the air. Expectations were playing a critical role in this performance, and the reality of an impending recession represents an oppressive reality to fend off. Eventually, the details will be settled on this program and then investor sentiment will have its say. While it is not a universal, the truism to ‘buy the rumor and sell the news’ has some grounding historically. The wave of global stimulus has been unprecedented, but it faces an unprecedented economic contraction. In a war of sentiment, the response comes in a single volley while the reminders of economic pain will come on a near daily basis. How will investor confidence weather this situation?

Poll from Twitter on White House Strategy with Virus and Economy 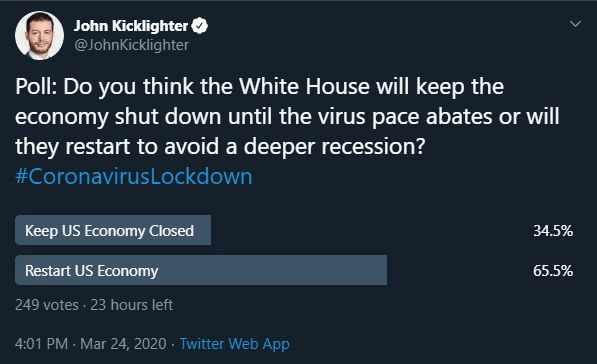 Volatility Is Directing My Decision Making, Should it Yours?

In evaluating the market’s next moves, most traders and analysts will apply their preferred market evaluation tools. That said, fundamentals and technicals register as unreliable to me. On the fundamental side, we have very early signs of economic traction in updates on stimulus but the reality of an economic contraction measured in the next two months of data puts the onus on qualitative rather than quantitative factors. On the chart side, levels look ephemeral whether based on horizontal ‘zones’, trendlines or calculated measures. Momentum overrules it all and such pacing is a factor of volatility. 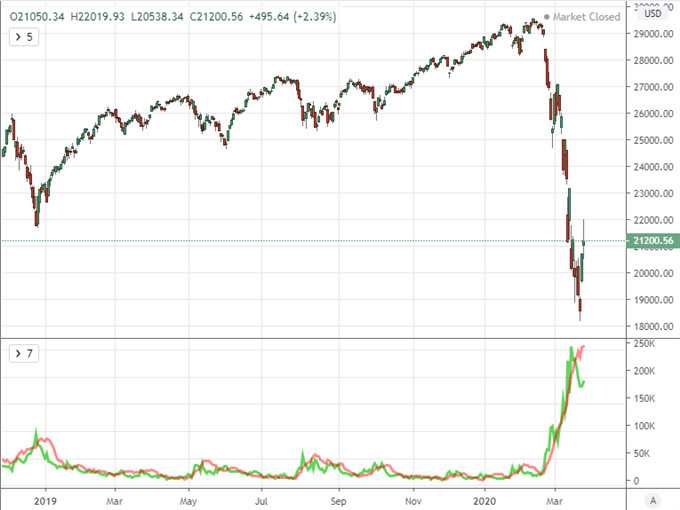 Volatility by its very definition is uncertainty. Whether referencing implied measures of volatility (like the VIX) or realized volatility (like a market’s ATR), activity levels are exceptionally high. Most consider this just a gauge of pacing, but the higher probability of sudden changes in direction is another feature of this sort of landscape. To commit to a recovery in this convoluted fundamental backdrop is exceptionally risky. To presume a revived bear trend presumes timing founded on unpredictable sentiment. My approach to such situations is to shorten my time frame and be more responsive. Rather than to presume to project popular opinion, I try to remain more responsive to a naturally indecisive world.

Top Event Risk May Not Be What You Expect

Looking ahead to the next 24 hours, there are some high-profile events that we can seize upon – not to mention systemically important questions floating in the collective conscious. That said, I believe the most loaded update we have on tap is the typically innocuous initial jobless claims out of the US. The last time I consider such a weekly US figure – the MBA mortgage applications – a systemically important update was back in the height of the 2008 financial crisis owing to the implosion of the US subprime housing crisis. This time around, the health of the US labor market is exceptionally important owing to the shutdown of the US (and the global) economy which will lead inevitably to mass job losses. That in turn raises the profile dramatically of the typical, lowly US jobless claims. This is the figure that will account to that swell most immediately. Beware the impact this update is likely to have. 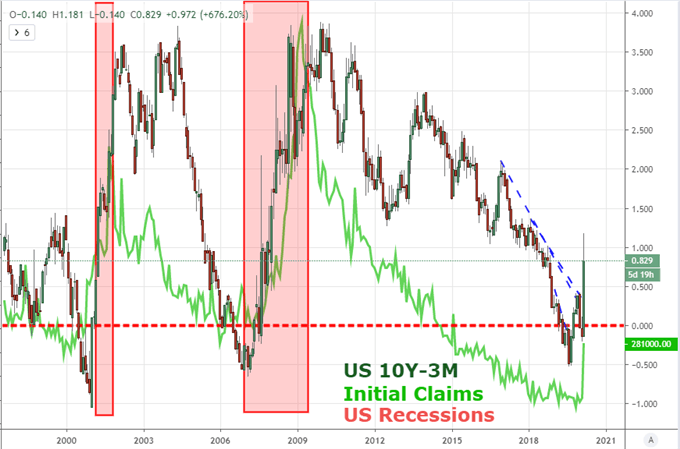 Across the rest of the docket, there are a few other indicators that should be monitored. Sentiment-based measures are particularly high on my list with the Bloomberg economist survey for China, Germany’s consumer confidence figure and the ECB’s economic bulletin. Outside of this list, monetary policy has a few highlights, but it is the Bank of Mexico rate decision that is highest on my list. That is not a gauge of what this group is expected to do, but rather the implications of the financial downturn – and strong Dollar – on the emerging market economy. Watch USDMXN closely if you are not already. 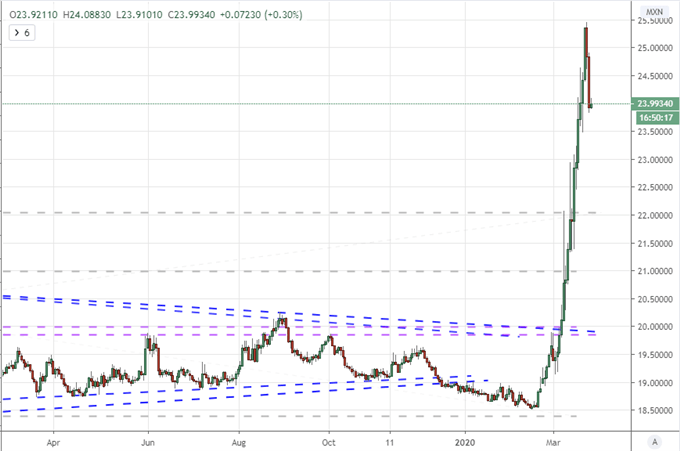