Another Week of Extreme Volatility for Risk Assets

There was finally a breeze of relief Friday that matched the frenetic tempo that we have seen in general volatility and risk aversion these past weeks. There was a steadying in capital markets that began in the Asian to European cross over, but the real charge came in the final hours of the New York session. The spark was difficult to miss. US President Donald Trump at a press conference announced that he was declaring a national emergency and invoking the Stafford Act which would in turn release funds that helped combat the ill-effects of the fast-spreading coronavirus. Bolstering the response to the COVID-19 spread and measures like freezing interest payments on student loans held by federal agencies is meaningful, but there remains a significant financial and economic threat to fend off still. 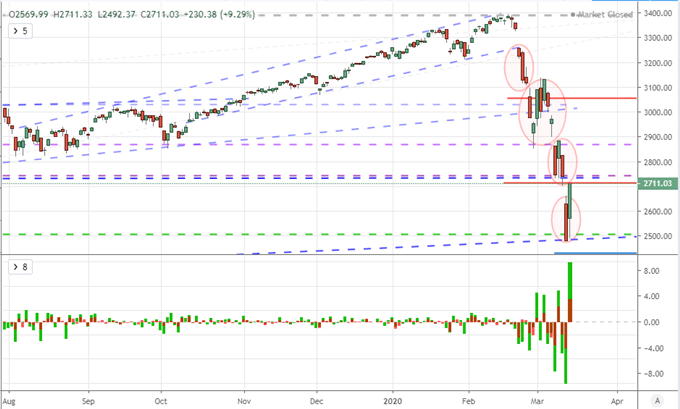 Through all the volatility of the past few weeks, there has remained a strong correlation among those assets that have a risk lean to them. That suggests that through the brief interludes of emergent hope and frequent return to panic selling, there has remained a consistency around the tides in sentiment. That is important to register as a determinant to market influences moving forward. Though we may come across high level event risk whether scheduled or unscheduled, a default to the systemic will dictate how fundamentals are interpreted for price action (ie weak US data will be viewed as a greater problem for struggling growth rather than a boon as the Fed is pushed towards more accommodation). I will keep close tabs on the relationship of these various risk assets to inform me how to evaluate incoming information. 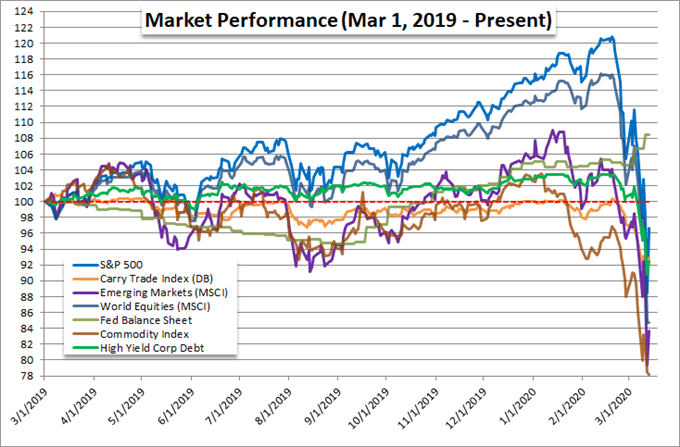 Considering the sensitivity of these markets to troubling news, I will maintain keep a close watch on developments over the weekend and only prepare for what the scenarios through Monday. Any view further than that will likely be complicated by too many layers of unforeseen developments that it would render the probabilities impractical. There will be enough to consider through the weekend. Just in the final session of this past week, we took in the news of the US emergency declaration, reports that the EU was preparing a clause that would allow fiscal stimulus and the Bank of Canada’s (BOC) surprise 50bp rate cut. It is reasonable to expect further unexpected developments like this through the liquidity pause and into next week. 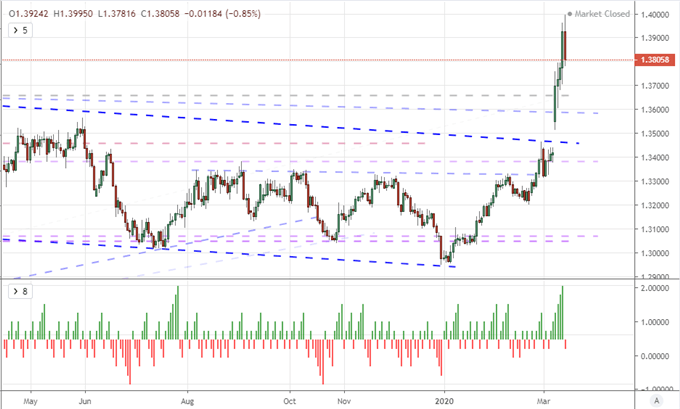 As we wade back into the active week, my principal concern will remain the status of liquidity in the key channels of financial stability. The extreme volatility we’ve experienced and the particular tempo of speculative unwind has been encouraged by troubling events, but it is the shallow nature of the market’s depth that has proven a lever for fear. Beyond a general surge in demand for government debt this past week, a surge in demand for the shorter end of the curve suggests a sense of boarder line panic. The Federal Reserve’s $1.5 trillion injection of one and three-month repos was a move that was likely both preemptive and addressing an unspecified concern with the health of some financial institutions. The group further injected funds Friday with Treasury purchases all the way up the curve to the 30 year. My preferred measure of trouble at the moment however is the comparison of gold relative to the US Dollar. While the both are havens, the former ties up cash that becomes necessary when margin is essential. So long as risk aversion favors the Greenback over the metal or Japanese Yen, I will watch my step. 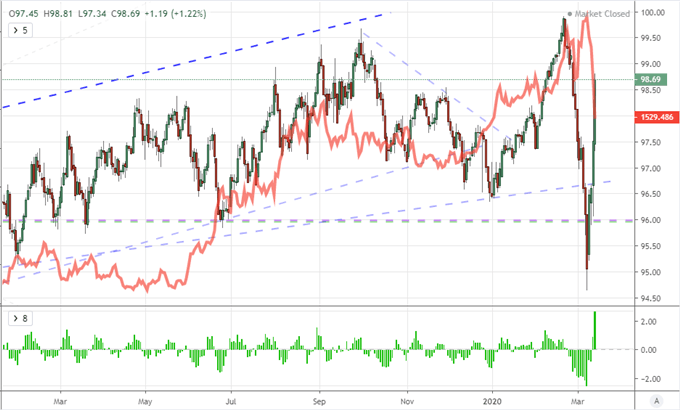 Looking out over the coming week, my top concern is for those events not listed on the calendar. Further rounds of stimulus are probable, and it will be important to register at what point there is so much liquidity that sentiment is simply overpowered by the availability of funds and the overwhelming desire to partake in speculation. It is a tall task to wave off the economic fear that has built into the market or to push the world’s leaders to act in a coordinated fashion, but that may very well be the water mark to turn our course.

Fiscal stimulus may be the only world engine left to revive markets from their forced retreat. Monetary policy is proving a responsive tool, but the impact that it is having is noticeably losing traction. After the Federal Reserve, Bank of England and Bank of Canada’s emergency rate cuts along with the Reserve Bank of Australia’s scheduled cut and European Central Banks QE upgrade, we have seen little more than acknowledgement of the effort being made. That recognition though may not be a positive thing as a discernable rebuke of the policy from markets threatens to undermine its effectiveness should conditions grow more dire and the groups grow more desperate. Ahead, we have three important policy meetings to register. The Swiss National Bank and Bank of Japan may very well offer more to their already over-extended efforts, but it will only act to call starker attention to the fact that it has done little to effect markets and economy even when conditions were favorable. As for the Federal Reserve decision Wednesday, the markets are very expectant of a steep further rate cut, but I am not confident of impact. Instead, I’ll be watching the Summary of Economic Projections (SEP) and Chairman Powell’s assessment of current conditions in his press conference. 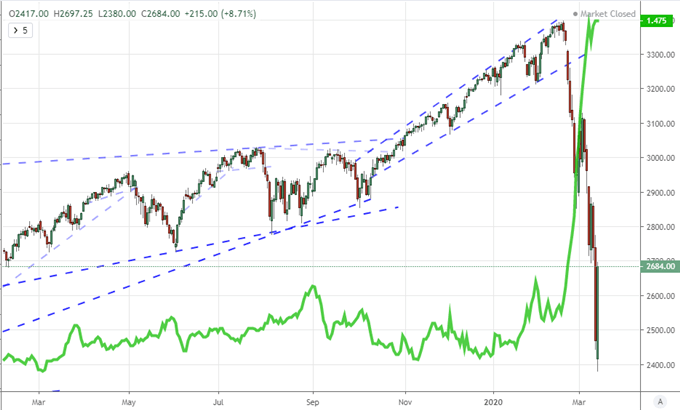