In isolated statistical terms, the S&P 500 led an incredible rebound through the close of the New York session Tuesday. The biggest single-day rally for the benchmark index since December 24, 2018 is a remarkable milestone. Not only was it a significant time since we had last seen a move of this magnitude, but the reference to that period also brings our attention back to the beginning of an impressive recovery from that point. It is possible that we follow a similar pattern, but that depends on the circumstances around volatility moving forward. While VIX and other related implied measures of activity for other risk-leaning assets ebbed this past session, they are still exceptionally elevated. As I’ve said like a mantra for some weeks now, volatility can be anathema to commitment. When markets are on edge, it is far more likely that panic can trigger a sudden turn of direction while maintaining a pace that turns opportunity into unexpected risk. 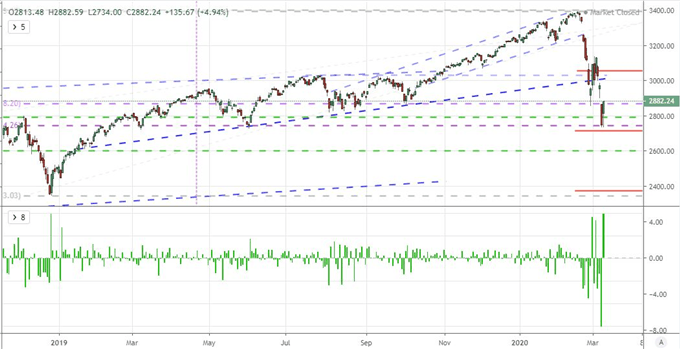 Just as I find value in referencing the correlation and momentum between various risk assets to get a sense of underlying sentiment, a comparison of implied volatility measures for these same markets can be used to potentially distinguish reversal from temporary pause in something so systemic as sentiment. Following the imminently familiar VIX; measures of expected activity for the emerging market, EURUSD, Treasury yield, oil and high yield bonds offer a similar one-day retreat from multi-year highs. Yet, even after the correction, they remain notably elevated. Among the sectors I’m keeping closer watch on for both price and volatility through the immediate future, the ‘junk bond’ ETFs (ie HYG and JNK) are perhaps the most loaded. The pairing of growth risks and financial strain has raised default risk for the expansive exposure to high-risk debt – similar to the situation with US subprime housing which many still paint as a catalyst to the GFC. 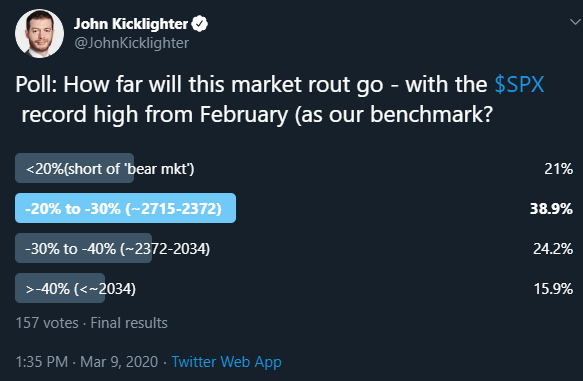 Coronavirus Leading to Stimulus and Assumptions of More

While China has reported that it has passed the peak of its new COVID-19 cases, the Western world doesn’t seem to have seen its rate of growth level out. The headlines of new positive tests will continue to pull at investors’ fears, but far more tangible is the concern surrounding the very real knock-on effects from this virus. In Europe, Italy has taken among the most extreme measures with a country-wide travel ban which in turn has led to reports that that the Prime Minister Conte is weighing a 16 billion euro stimulus package. That would be a substantial stimulus response which groups like the IMF and ECB are calling for, but an uneven application could prove less effective at recharging sentiment and more a crack for more austere Eurozone members to open. 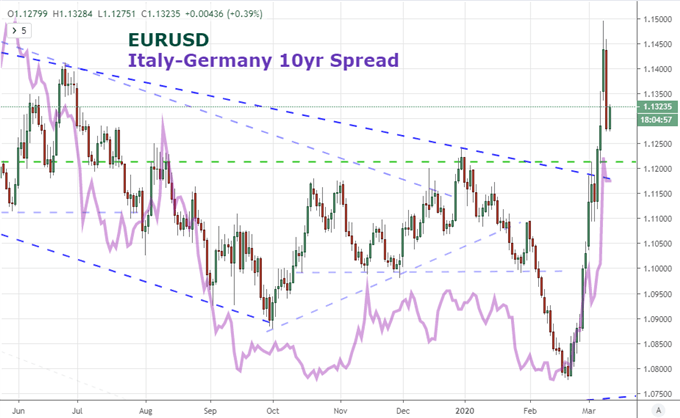 In the US, markets were waiting for a similar bold action to be taken by policymakers. The President met with Republican senators to discuss possible strategies to bolster the markets and troubled economic outlook. Yet, the remarks from Donald Trump after the gathering made clear that nothing was material was settled upon. Despite his assurances that the meeting was a good one, the S&P 500 and other indices pitched into another intraday retreat. Ultimately, the market did recovery through the closing hours of the New York session despite the uneven policy backdrop which may shift the focus on the scheduled Wall Street executives gathering at the White House later today or back to the aggressive Federal Reserve projections that have held throughout. 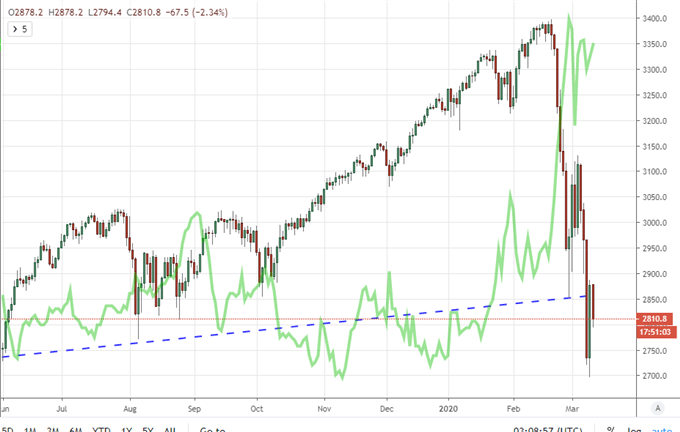 Speaking of Fed rate forecasts, the yield outlook seems to be following a strong alignment to the US Dollar’s course. The DXY Index posted its strongest single-day rally since the Brexit back on June 24th 2016 (the day after, when the results were known). Has this officially arrested the benchmark’s worst tumble since 2009 or is this another temporary reprieve amid a broader pause in the storm? If interest rate speculation is the driving force behind this shift, Fed Fund futures are not showing much in the way of relent when it comes to pricing in a near zero rate by the end of the year. The conditions that would predicate such a move would more likely be interpreted as an economic and/or financial crisis, so perhaps the full desperation for liquidity would urge another aspect of the Greenback’s appeal. Though we have the typical market favorite rate forecasting measure in the CPI ahead, the data is unlikely to override sentiment as a driving force. 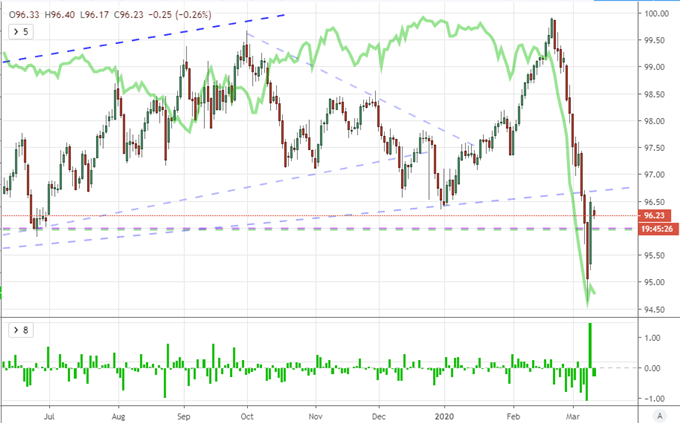 Crude oil is another key market to watch as both potential systemic catalyst and a possible performance offshoot from broader risk measures. Along with a host of other risk assets that were bid Tuesday, the commodity found a much-needed bounce. The recovery, however, was a temperate one. That is probably owing in part to the lack of traction in economic forecasts thus far as well as the unyielding supply-side price war between Saudi Arabia and Russia. Given the further risk that can turn out of this sector should the high-yield debt concentrated in the sector trigger a leverage avalanche, and it becomes a more prominent measure than many may appreciate.