As has been said many times before, fear drives people to seek simplistic answers for the trials and tribulations they face. While the risk of loss can be unsettling, the unknown seems to widen the possible limits on how much pain there may be ahead. Therefore, it comes as little surprise that broad and intense ‘risk aversion’ suffered by the global financial system Monday elicited headlines that would at least make the pressure understandable. The coronavirus remains a commanding headline across the globe with the focus on the daily tally of new cases being outpaced by the steps taken by authorities around the world to curb the spread and economic impact the contagion exerts. There hasn’t been a particularly refined measure accountable for this particular fundamental concern, but the S&P 500’s tumble has stood as a market-wide baseline. With Monday’s drop – the worst day’s collapse since 2008 – the measure is on the verge of official ‘bear market’ (20 percent correction from highs).

Yet, if the benchmark for measuring risk is such a decentralized measure, how can we readily attribute any single source to a popular headline? You can’t. Markets are the aggregation of many competing views on value, but there are some particular metrics that can reference more concentrated threat. Take for example oil. The commodity experienced an unprecedented gap lower on Monday’s open as headlines over the weekend of the price war arising between two OPEC+ members (Saudi Arabia and Russia) exacerbated the natural demand concerns from a dimmed economy. There was considerable discussion as to why this asset would represent a burden to global markets as consumers benefit from lower refined products, but there are serious knock on considerations – like the US shale market and the scale of high risk debt associated to energy production around the world.

Chart of US Crude Oil and Opening Gap (Daily) 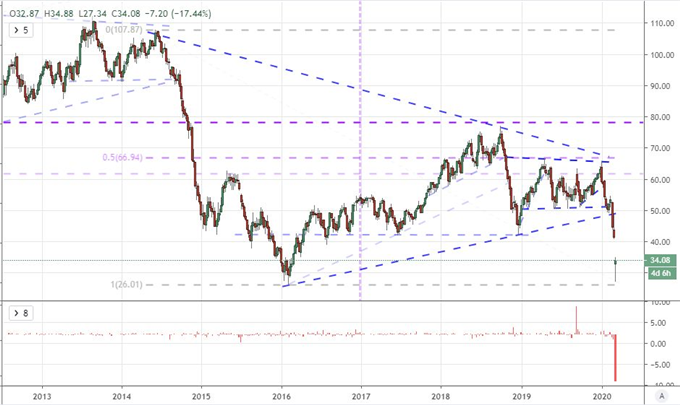 What truly matters as market participants and observers jump from headline to headline is the overwhelming risk aversion effort itself. To de-lever on overextended markets regardless of location and asset type is perhaps the most earnest signal of financial stability risk as can be observed. During the Great Financial Crisis, considerable attention was paid to sub-prime housing to the point of distraction from the growing liquidity problems that actually led to the unrelenting breakdown of the financial system during that period. We should watch the same thing. The depth of markets, the intensity of selling, the fears around typical havens are all systemic elements that can present better signal than a headline. 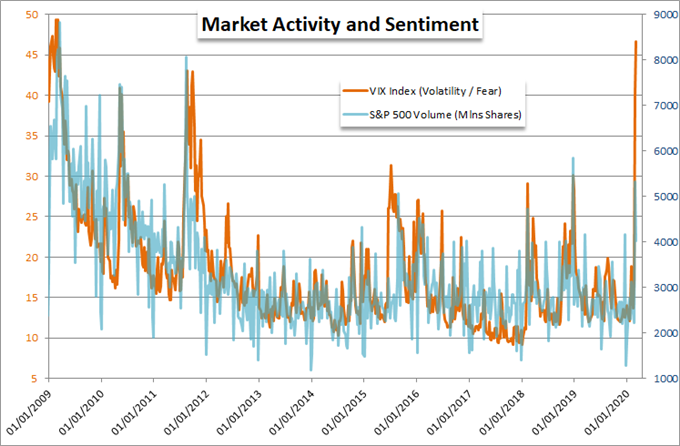 What Demand of Treasuries Versus Dollar, Yen Over Gold Says of Conditions

As aggressive as the tumble on high risk, high return assets was this past session; the performance of havens may have proved more instructive. The bid did not follow the course normally expected – and that may help us better assess what is driving actions. A remarkable contrast was the surge in TLT or dive in the benchmark 10-year Treasury yield relative to the stained tumble for the US Dollar. Normally in risk-off scenarios, the two move in tandem as the global demand for American top-rated debt necessitates first a transaction to the local currency. Yet, that is clearly in contrast this time around. That likely shows a satisfaction for localized top-rated government debt in Asia (like JGBs) and Europe (such as German Bunds or UK Gilts). If fear ratchets up to the next level, preference for the materially more liquid US brand could be revived.

Another remarkable comparison in this arena is the unmistakably throttled gold as of late compares to the resurgence of the Japanese Yen across the board. The precious metal represents a more extreme haven that prizes a search for alternatives to traditional fiat assets (currencies) in an environment where recognition of central bank impotence is regular trading circle chatter. And yet, the commodity did not rise materially even against the Greenback which was diving. Further, there are certain currencies that are out-quaffing what many consider an ultimate haven. The Yen for example has surged in particular to start off the week. This is likely an indication of necessary capital flows. A repatriation of foreign Japanese investments is a necessary first step before we can even entertain the notion of where to select a hide hold. From Gold priced in Yen, there have been some notable and immediate correlation polarizing moves these past few weeks. 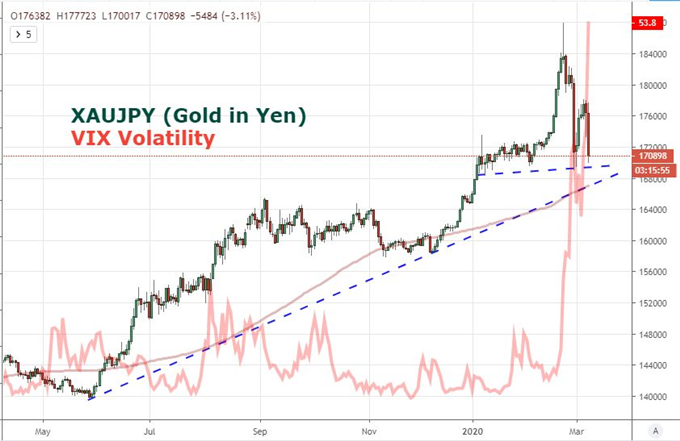 As we monitor the relative performance of certain markets remember the implications that uneven bearing can have among benchmarks that normally hang on one end of the risk spectrum or the other. If there is divergence from traditional with preference for a particular player, it can reflect a specific regional risk rather than an all-out fire. Yet, as the sense of panic begins to set in, preferences relent to the categorization of liquidity. Rather than any reference to specific technical levels, I’m watching for global unwinding that shows volume soaring as open interest drops with gaps.

As the risk of systemic stampede becomes casual conversation, it is more and more likely that officials mount an effort to head of financial ruin or economic collapse – whether they are successful or not depends on what is proffered. Following Monday’s implosion (what is readily being called Black Monday) expectations for intervention have reasonably swelled. That said, the G7 has yet to announced its next phase if it has one and the Federal Reserve has not yet stepped in for another emergency (out of schedule) rate cut as it did last week. A global monetary policy move would have a more profound impact from a central banks perspective but fiscal stimulus may be the only standard tool with serious scope left. That said, the US Treasury Secretary and Chief Economic Advisor to the President are due to meet with senate republicans later today to talk options while Wall Street executives have been invited to the White House Wednesday. Will it be enough?