S&P 500 and Dow Suffer Sharpest Tumble Since August 2015, Closer to Self-Sustaining Risk Off

Volatility Persists and It Does So Without Direction

High volatility doesn’t always play out as a clear statement on risk trends – at least in the way that many traders like to interpret. There is a strong negative correlation between the S&P 500 and VIX volatility index. This is due to a number of preconceived speculative factors but its is also practical in the nature of equities being a primarily buy-and-hold product for the average investor while the implied volatility index is derived from the options behind the same equity index which are typically used to hedge exposure on the underlying. The technicalities aren’t as important as taking stock of when the normal relationship deviates. And, it has deviated this week. Expected volatility is high and so is realized. The 10-day average true range (ATR) on the SPX is the highest ever in points term and the highest since 2011 as a percentage of current spot price. That said, this same statistical turn over looks like hyperactive chop on the index’s daily chart. 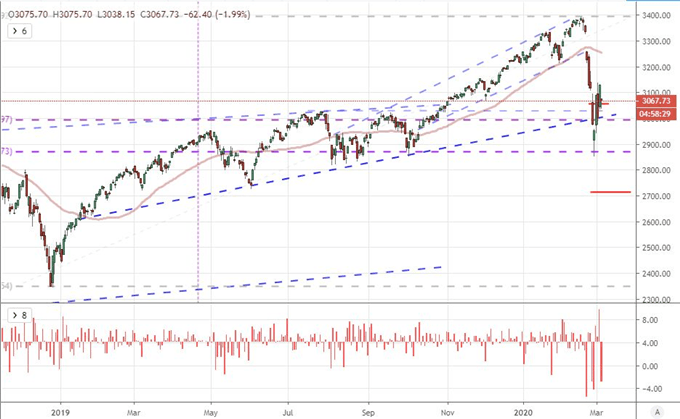 Volatility can work as readily against you as for you. This is the same double-edged sword as we find in leverage. Excess exposure is as much a function of leverage as notional borrowing to gain position. Looking across the spectrum of risk sensitive assets, it seems that the same lack of momentum is in play. This creates an environment that may entice many with anticipation of hitting distant targets more quickly, but the capriciousness of price action is not conducive to most traders’ time frames nor their standard risk management structure. The more tuned the market to risk appetite – whether a haven or indulgence – the greater an anchor this volatility creates. Consider perhaps those markets or pairs that don’t observe sentiment so unilaterally.

Dollar Finds An Unlikely Momentum Within the Chaos with NFPs Ahead

Despite the commonplace of sudden changes in market bearing for most benchmarks among asset types, there is an impressive consistency to be found from the US Dollar. The DXY Index extended its rally this past session to clear trendline support that stretches back to October 2018 – though I wouldn’t label it a commitment move. In turn, the EURUSD – the principal component of the index – has taken out a more technically profound resistance in its mirror performance. A similar trendline with similar historical reference is second to the 61.8 percent Fibonacci retracement to the benchmark pair’s historical range. Yet, Dollar pain is not a universal as USDMXN can testify to with its biggest two-week charge in the Greenback’s favor in a similar time frame. 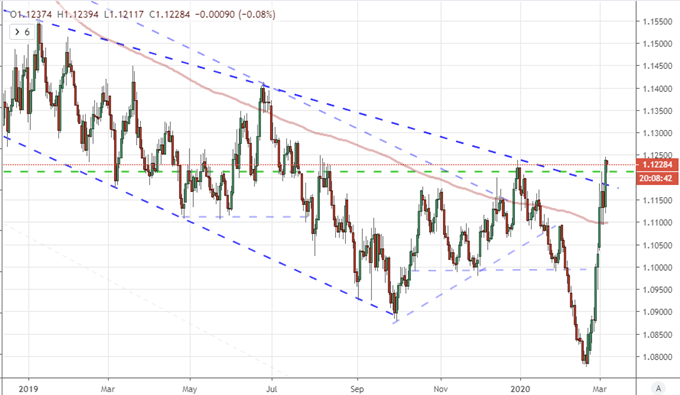 With the focus on the US Dollar through the final session of the week, we meet one of the most familiar scheduled events on the global economic docket: the US nonfarm payrolls (NFP) release. This indicator is influential for a number of different reasons. While it may see the monetary policy implications would be the most pressing issue at hand following the Fed’s emergency rate cut earlier this week and the strong speculation of an overwhelming wave of further easing through the remainder of the year, this key mandate signal is unlikely to materially alter the central bank’s intended course. A multi-decade low in the jobless rate and diminished importance around wages won’t push hard enough on the string to distract the group from its financial stability focus. Instead, the headline figure will take precedence for its familiarity in risk circles. A strong or weak showing in net payrolls can readily be interpreted as a statement on economic strength or flagging. 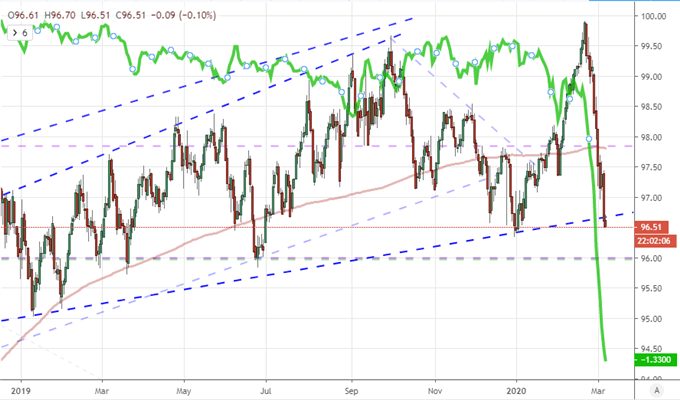 Canadian and Chinese Event Risk Should Be of Particular Concern

Outside of the familiarity of the US event risk, there are a few other regional highlights that are likely to rise to the occasion of targeted volatility. The Canadian Dollar is one such candidate. In terms of sheer volume of high-level event risk, the Canadian docket holds the greatest number of heavy-hitting releases. While the principal focus is US employment data, there is also a Canadian jobs report on tap. And as far as short-term reactionary volatility goes, this country’s data may be more consistent when it comes to targeted volatility for the local currency. Just in case that release disappoints though, we are also due Canadian trade figures to weigh the carry through of trade wars and manufacturing activity which is perhaps the most direct GDP update. One consideration: USDCAD has the complication of cross fundamental winds, so consider less-uncomplicated crosses. 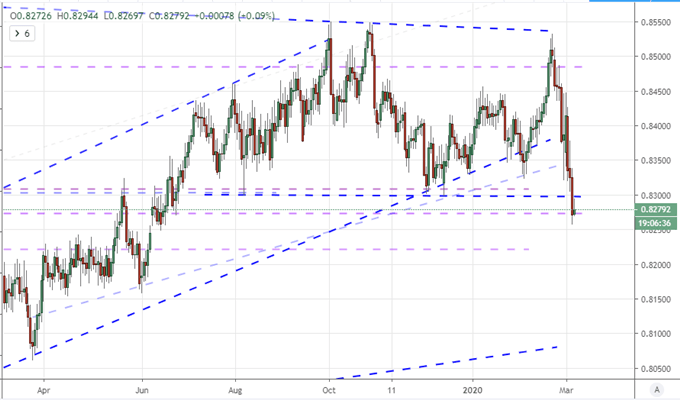 Another fundamental focal point of merit this ahead will be the Chinese Yuan. However, it isn’t just the currency that will find exposure to event risk. The health and stability of the second largest economy in the world is a matter for the global financial system. The troubling downgrade to growth for the country issued over this past weekend with the government’s PMIs figures for February was lost somewhat in the speculative swell through active trade. Yet, we will be reminded of the fragility and pull of the region through the upcoming week as we have Chinese trade and foreign reserve figures for February due on Saturday. A weekend release is more than inconvenient for global investors, it is a lever to risk. Consider your weekend risk holdings carefully. 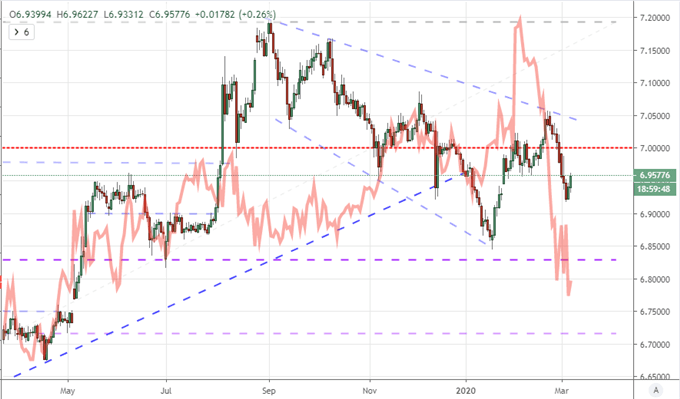