Why Did the S&P 500 Join the Dollar In a Tumble After an Emergency 50bp Fed Cut?

An Emergency Fed Rate Cut is Fuel for a Different Market

For the first time since the Great Financial Crisis, the Federal Reserve cut its benchmark rate by 50 basis points (to a range of 1.00 – 1.25 percent) and outside of its schedule. Something of substance was expected from officials heading into Tuesday given the emergency meeting called by the G7 finance ministers and central bank heads, and this announcement would have catered to the speculative reasoning of market participants that have commanded markets this past decade. Yet, this was seemingly not enough to sooth the raw fears that have broken through as the coronavirus fallout has finally tips the scales against complacency. At the end of a very volatile day, there was ultimately a broad risk aversion across the financial system. Once again, the US equity indices seemed to reflect the heaviest toll. The S&P 500 posted a record single-day’s range (in points) and ultimately closed -2.8 percent lower. It is still off last week’s lows, but a revived selloff could readily leverage the extreme volatility we’ve suffered recently. 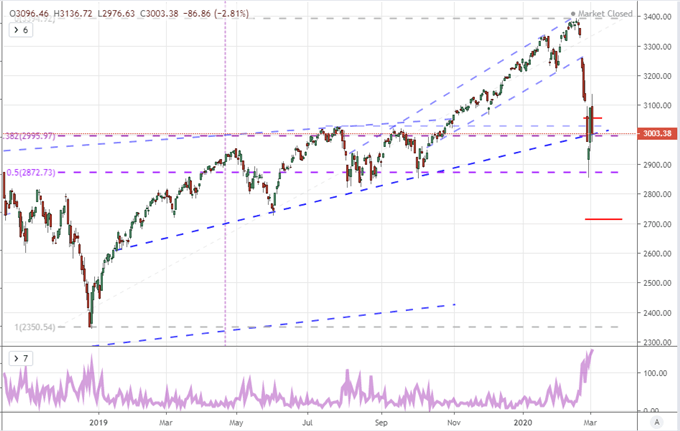 In a poll, I asked Finance Twitter followers whether they believed the Fed’s aggressive move would restore risk appetite trend. The large majority believed it would not. If the world’s largest central bank is unable to charge a speculative bid, it is likely that the view would then turn to a sense of desperation. That only adds to the troubled conditions in our financial system. I believe that this was a strategic move on behalf of the G7 rather than a unilateral move by the US alone. Realizing that the options for the world’s authorities is extremely limited, they would want to expend their dwindling ammunition sparingly. If they were able to correct fear on the first go, it would save them from using precious resource. There are likely further steps to their unofficial plan not relayed in their communique. Global central banks are likely the next line of defense and government stimulus would be a last bastion. Will we have to witness these battles before everything is said and done? 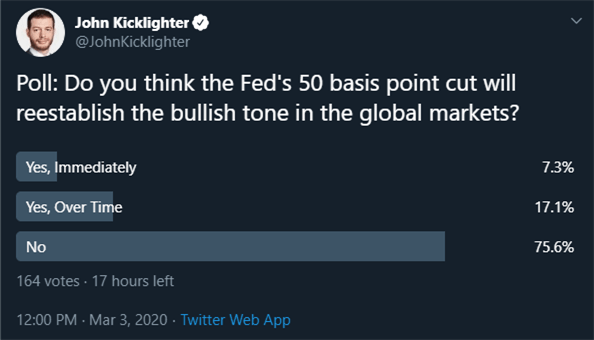 As risk aversion exerts its will over the markets, the previously unquestioned pillars of the financial system and economy come under greater scrutiny. At present, the reach and effectiveness of global monetary policy is as critical a stabilizer as exists. The US central bank has the greatest capacity among the majors to ease through standard channels (rate cuts), while others are already pushing into unorthodox policy. The European Central Bank and Bank of Japan are two of the other very few major players with the scope necessary to stir a global perspective. That said, they are already in active stimulus programs and have cut rates to essentially zero. If they are forced to ease, it is far more likely that their efforts are exposed as ineffective from the jump. That may seem just a risk for further efforts, but there an incredible weight afforded to this outlet over this past decade. Losing faith here is not just a lose of climb, it could usher in the collapse of risk trends. 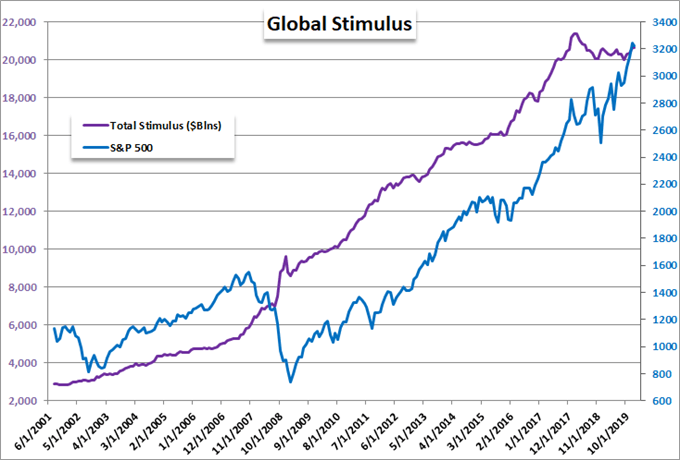 Another systemic issue that arises under sustained ill-winds is the prevalence of leverage. This is a common financial term for those in the FX market and we are particular aware of the risk that it amplifies when circumstances turn out of our favor. However, the rest of the market doesn’t seem to be up to date on that lesson. Leverage at the brokerage level at the NYSE (‘markets’) is just off a record. Corporate debt has ballooned as a means to buy back shares. Consumer and government debt in the US has climbed to unprecedented levels. And, of course, central bank balance sheets are their own form of liability or leverage. Everyone is maxed out on ‘risk’. That is not encouraging. 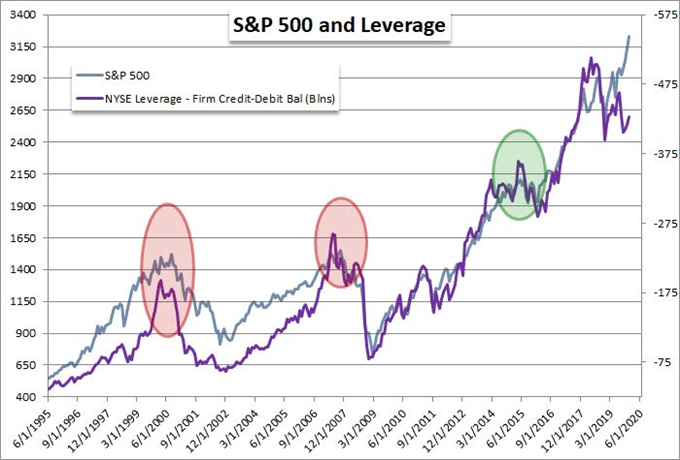 Another, frequently overlooked issue that we have to contend with should rough seas arise is the utter inexperience among a large swath of the world’s market participants for bearish or troubled conditions. I took a poll late last year among the Twitter Finance crowd (admittedly not the whole universe), and 80 percent of those that participated said they have not been in markets long enough to have experienced the last recession and/or global crisis. That is no small matter when conditions start to deteriorate. 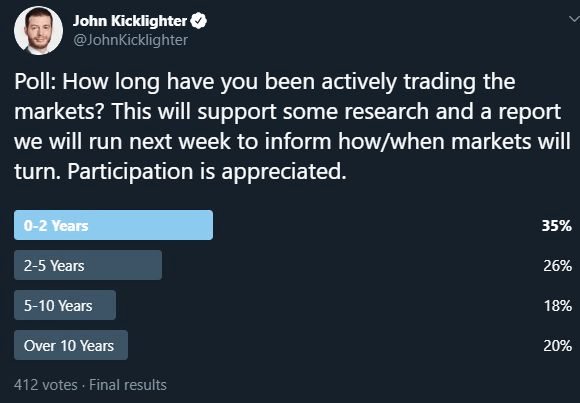 In these conditions where systemic changes are afoot, it is worth keeping tabs on some key assets as a barometer for certain aspects of the markets that can often blend but are fundamentally different. Gold for example rallied this past session with the quickest pace since the June 2016 Brexit vote. This is a haven in the traditional sense, but the metal is also buoyed by its role as an alternative to traditional fiat assets which are being universally throttled by this most recent swell of easing which lowers the value of currency and government debt. The Dollar is another such measure. A 50bp Fed cut will naturally throttle the relative return assumed from this benchmark which caters to the painful tumble the currency was already sporting. The 8-day drop from the DXY through Tuesday was the worst showing since February 2016. Will relative yield concede to interests of safety demand? Or perhaps the upcoming ISM service sector activity report which is a key proxy for the country’s growth will take the lead for relative GDP as a foundation of stability. 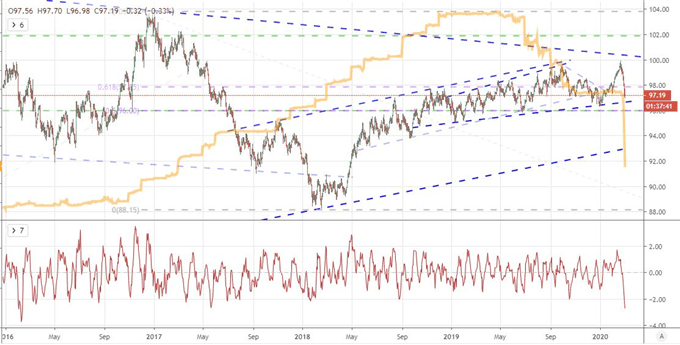 For the more isolated market movers, these unsettling underlying conditions can act to amplify noteworthy developments – even when their implications are contained to specific assets or regions. The Australian Dollar will continue to be a put-upon currency. Following the pain from China and the RBA’s rate cut yesterday morning, we are now expecting the 4Q GDP update. Speaking of official growth figures, South Africa reported a painful -1.4 percent contract Tuesday and Brazil will be the next major emerging market to report later today. The USDBRL is already pushing record highs and the local central bank’s efforts to halt the tumble have been fruitless. Speaking of monetary policy, the outlook for the ‘majors’ will be a constant distraction, but the Bank of Canada (BOC) will have an opportunity to conform or diverge in its own efforts during the US session. After the emergency Fed move, the markets are raising their expectations for the group to drop its guarded hold.