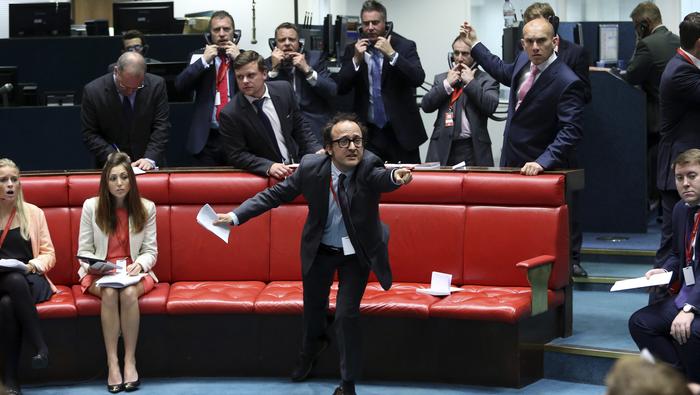 It may seem that Monday’s impressive rebound in risk-leaning assets was the antithesis of last week’s broad collapse, but there was a common denominator: volatility. In markets defined by uncertainty and speculative sensitivity, abrupt changes to direction can occur as readily as cascading trends of fear or greed. That is the nature of volatility. The rally measured to start this new week was particularly impressive in contrast to the environment presented last week. Benchmarks in the S&P 500 and Dow suffered their worst week’s performance since the Great Financial Crisis (GFC) which naturally had many on edge that a systemic event was underway. Subsequently, a 5 percent rally from the Dow this past session – an unprecedented nearly-1,300-point move – looks like a dramatic rebuke to such fear. However, I am not so placated by this turn of events. 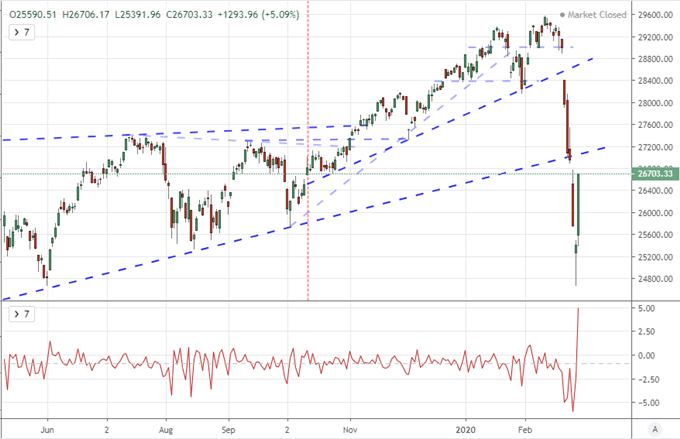 When seeking the motivations of a market-wide sentiment shift – if one exists – I like to refer to a broad spectrum of assets that represent an appetite for higher return or greater safety. Looking across the continuum of risk assets, there was a broad rise in such measures from US equities to carry trade to the growth-sensitive Treasury curve. That does speak to an underlying strength rather than ancillary by-product of a ‘lesser’ fundamental theme. Yet, there is reason to remain cautious of conviction. Taking stock of the progress in indices from session to session, we can hone in on a possible catalyst that participants focused on. Given the drop in Asian indices (with the exception of Chinese assets), a moderate recovery in Europe and the full gallop during US hours, the global charge for speculative appetite seemed to come during New York hours. 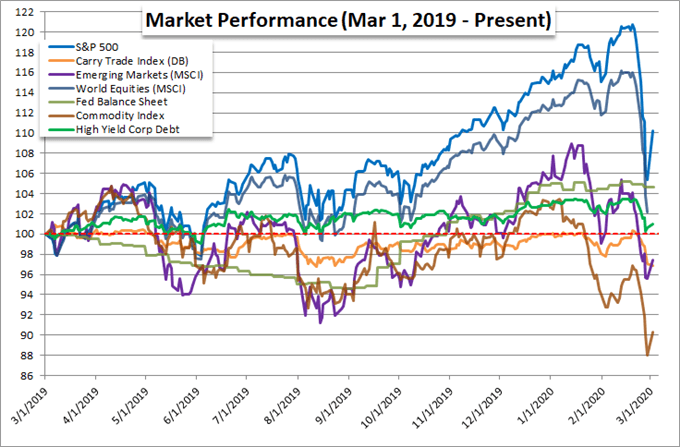 Through the first half of Monday’s session, the top headline was one of very troubling fidelity. The Organization of Economic Cooperation and Development (OECD) downgraded its global growth forecast significantly from the November outlook. A 2.9 percent tempo projected previously was lowered to 2.4 percent in an optimistic scenario. For many developed economies, this would be a moderate clip, but for the global economy, it is the worst pace since 2009. Further, there is a bearish scale to this forecast. According to the group, further spread of the coronavirus with its economic impact could slow the world to 1.5 percent expansion – with potential recessions for the likes of Japan and Eurozone. If this were the only news on the day, it would have likely seen bears recover their traction. Fortunately for optimists with a recent crisis of conviction, it wasn’t.

The top news through the opening session of the week was the announcement that the G7’s finance ministers would be meeting Tuesday at 12:00 GMT. It was reported shortly after that the central bank heads of the same group would be in on the emergency meeting as well, with Treasury Secretary Mnuchin and Fed Chairman Powell leading the call. The expectation is that these collective powers would be issuing a comprehensive and powerful response to the greatest wave of risk since the financial crisis. Yet, practicality is critical to consider for market scenarios moving forward. Central banks are essentially fully committed with near-zero rates and stimulus programs at or near record levels. There may be some capacity in the orthodox and unorthodox paths, but there isn’t much that would be considered effective in these strained times. The real expectation is for the deep-pocketed and previously combative governments. Reversing trade war mentality these past two years could further ease oppressive sentiment views. Yet, a pre-emptive and collaborative effort is perhaps too much to expect with governments that have made it a core policy to pursue growth without regard to trade partners. With that said, are the markets expecting too much from Tuesday’s meeting?

Keeping Closer Tabs on The Dollar, Gold and Australian Dollar

As we wade deeper into the trading week, there is a host of high-profile event risk that taps into a range of generic themes. That said, it is more likely that the market defaults to the importance and uncertainty centered on the G7 meeting Tuesday morning US time. That will make assets that I believe offer a more fundamental view of the financial system and economy even more important to monitor through the next 48 hours. I will be watching USDJPY as the comparison of carry unwind that would favor the Yen compared to severe liquidity demand which preferences the Dollar can speak to scale. Gold is another measure of greater depth as it is a safe haven that reflects appeal for alternatives to one-dimensional risk assets, as when questions of financial stability arise in key regions. The Dollar is another such measure. Carry currency, relative growth, ultimate liquidity currency are just three roles to this complicated benchmark. Interest rate forecasting haven’t been a particularly remarkable aspect to its performance these past months, but the sudden surge in rate cuts to virtually encompass four 25bp cuts through year’s end is perhaps too sever to ignore. 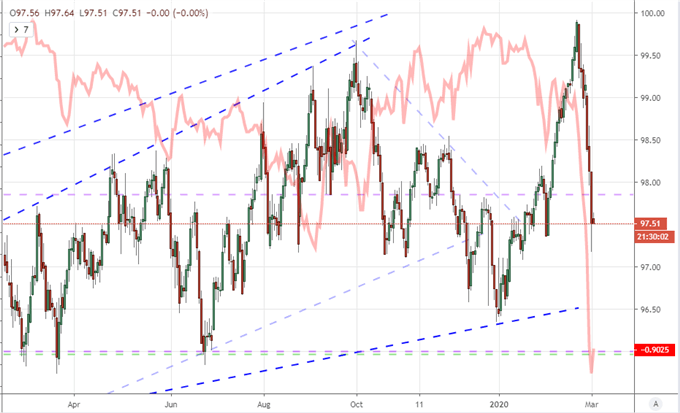 In honor of the G7’s anticipated monetary policy guidance, the monetary policy decisions scheduled this week should be quite remarkable. The Reserve Bank of Australia (RBA) rate decision Tuesday morning carries anticipation of a 25 basis point cut through overnight swaps, which may preempt the group’s more comprehensive movements later in the day. Already this close to zero, we are looking at a potential fundamental shift in position for a currency consistently identified as a carry currency. The Bank of Canada rate decision later this week carries similar risk – though the speculation is not so certain and there is more room to cut. 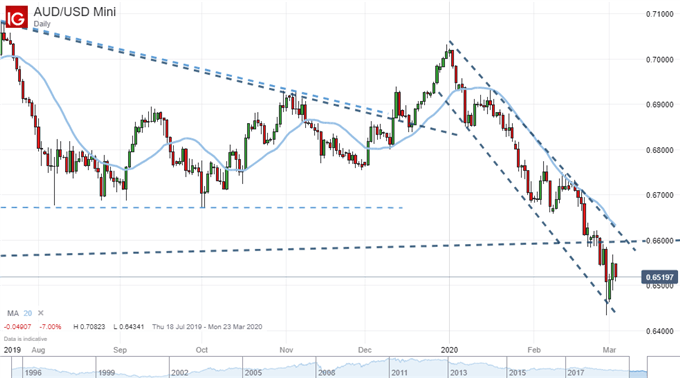