The Dow and S&P 500 Have Entered Technical ‘Correction’ Territory

A familiar pattern is emerging this week. A half-hearted effort to steady markets either during the European or US morning session is made only to be crushed by afternoon selling. The effort to produce a bounce in US indices was even less convincing Thursday than what we had seen before while the tumble moved closer to the boarder of panic. Both the S&P 500 and Dow opened this past session with a gap lower. It wasn’t as large as the Friday-to-Monday air pocket, but it was substantial. The full scale of the bearish wave didn’t hit until the closing hour of the New York session. Hard selling through the close of the session saw a single-day’s rout of over -4 percent for the major indices. That was the worst single day performance since 2011. For the entire week, the pace represents the worst hit for the US indices since the height of the Great Financial Crisis (GFC) back in 2008. Now down over 11 percent from highs, these benchmarks qualify as technical ‘corrections’ (off 10 percent from highs) and we would hit a 20 percent ‘bear market’ at this pace by Monday. 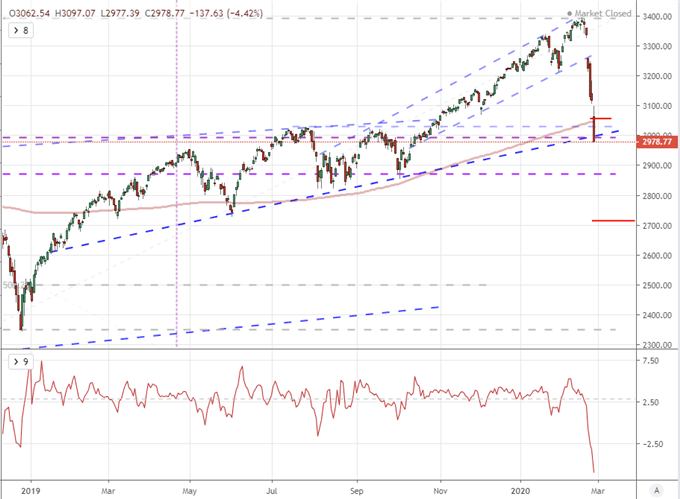 The pace of the US equity market collapse is one in which fear is a clear driver and it seems to be leading to the border of panic. However, the implications of that more extreme dive are greater breadth as investors attempt to escape all levels of exposure to the point where the market’s tip into a systemic and self-sustaining trend. Looking across the spectrum of speculative assets (or at least their representatives) that I monitor, there remains a distinct pace difference between the S&P 500 and most other milestones: VEU rest of world equity ETF, EEM emerging market ETF, HYG junk bond ETF and the carry trade among other popular venues. This is likely owing to the years of outperformance for the US benchmarks – regardless of the justification for the preferential treatment. I am keeping track of the ratio of performance of the US stock market to other measures like the VEU, as there is likely to be a rebalancing. That said, the eminence of these measures will more likely translate their retreat into a systemic momentum that is difficult to escape. 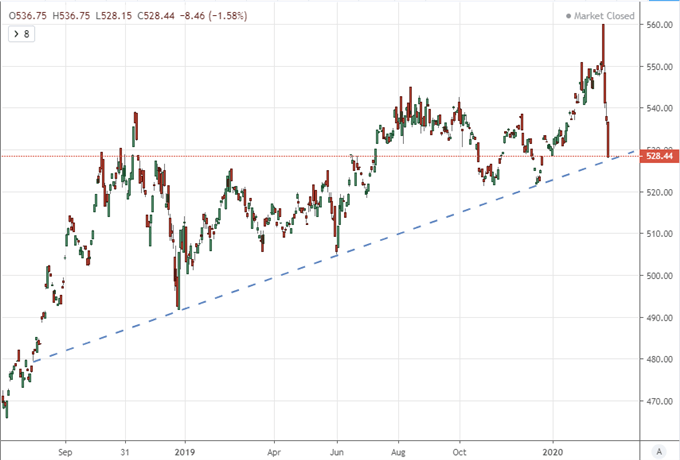 As Fear Intensifies, The Blame Concentrates on the Virus and Triggers Alternative Issues

When something unsettling happens, it is human nature to find the reason for why it occurred. The knowledge doesn’t compensate for the losses, but it does offer a sense of control that was lost in the fallout. It is this need to re-establish some semblance of control that pushes the masses to find explanation in the most prominent headlines of the day. This is what happened in 2008 with US subprime housing, tech investment in 2000 and East Asian investment in 1997. Today, the headline is the spread of the coronavirus which is taking a very significant human toll and starting to register its economic impact; but its capacity to topple the financial system seems to fall far short of the robust complacency that has driven a record bull trend. It is sentiment itself that seems to be given the weight of market-movement to the fundamental theme rather than the other way around.

A concerted risk aversion, doesn’t just make the headlines around the virus more toxic; it makes the other chief themes of the past years more grave. Economic health strikes a very clear chord with financial strain posing a much more remarkable threat to the otherwise tepid pace of expansion registered across the globe. Crude oil this past session extended its slide below 50 while the US 10-year to 3-month Treasury yield curve is holding its inversion…and the recession signal that economists draw from the occurrence. As for trade conditions, the threat of strained growth is pushing countries to solutions. Given the popularity of protectionism – growth at the expense of others – recently during good times, it is no surprise that they default to this solution during difficult times. And then there is monetary policy. As the demands of stability growth, expectations turn to lawmakers (who are lacking for responsiveness) and central banks (who are running out of options) swells. 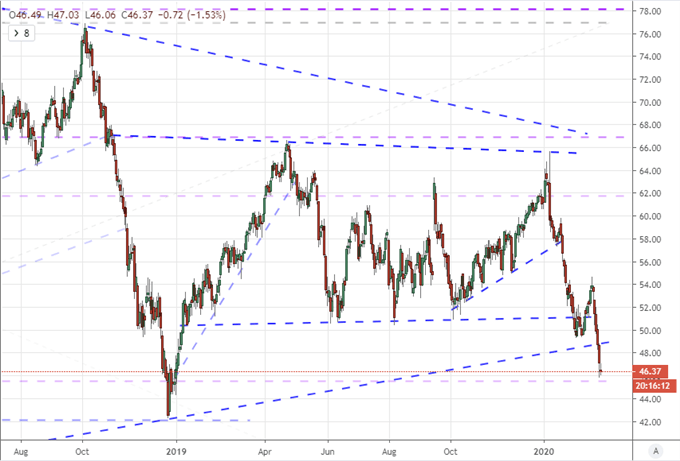 Dollar, Yen and Pound Defer to the Euro as Risk Aversion Hits Stride

Perhaps it is the collapse in monetary policy forecasts that is driving the Dollar to its drop. The DXY trade-weighted index has suffered a series of daily losses that accelerated through this past session. For the principally weighted pair for the Greenback, EURUSD, the drop was even more severe. The pair rallied – Dollar dropped – the most since January 2018. That is a remarkable turn of events in a risk-off environment given that the world’s most liquid currency is traditionally considered the top billed haven. Perhaps it is the surge in rate cut expectations from the Fed – the central bank is now expected to cut by 72 basis points by year end which is close to three full standard cuts. That will cut down on the currency’s relative premium. There is also a throttling to be found via the presumed growth advantage the Dollar has treaded on these past years. These conditions will not flip the performance of the US and say Europe, but it does cut down on the perception of relative value. 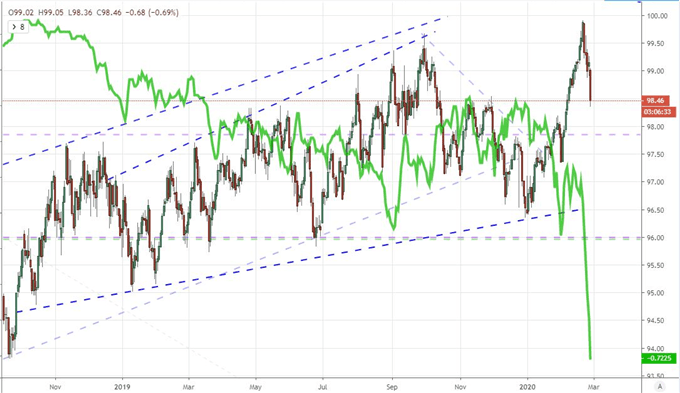 The Dollar isn’t the only traditional safe haven that has been showing a lack of traction. Consider the Japanese Yen. While USDJPY has edged lower, EURJPY actually advanced this past session. EURGBP would put in for a significant bullish technical breakout and even EURCHF managed to advance. That is exceptional given the historical status that these various measures have carved out through previous periods of rise and fall. It seems here that the common denominator is a strong Euro. In fact, an equally-weighted Euro index shows a significant charge this past session – the strongest in a few years – and a remarkable series of daily gains posting recovery. Why is this currency being treated as the preferred haven? It is the second most liquid currency in the FX market while its government and central bank have proven proactive active in heading off crises – while others seem to be willing to wait until they overtake their markets. Keep a close eye on this development. The foundations of markets do change, but absolute liquidity demand can return us to more elemental conditions. 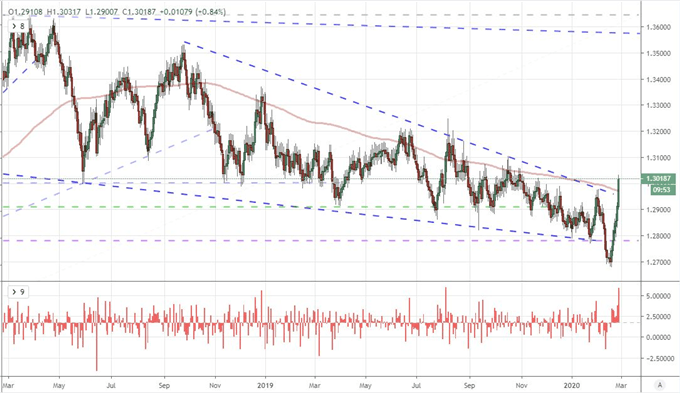