From An Effort to Stabilize, Another Troubling S&P 500 Signal

After two days of hard, global selling across risk-leaning assets, it seemed that the speculative masses were testing the waters for a rebound – and short of that, stability. As sentiment carried across the world from one session to the next, the selling winds in the US close kept Asia under pressure Monday. Yet, that fear-based charge seemed to let up around the European session and into the open of Wednesday’s trade on the New York Stock Exchange. Risk appetite wasn’t roaring, but it seemed enough to earn at least a speculative bounce that catered to the ‘buy the dip’ crowd that have been so prolific these past years. The rebound registered clearly in the major US indices, and the S&P 500 was attempting to slowly claw back lost ground. The effort stalled far too quickly though, with a slide from mid-day that would see yet another daily loss and the largest ‘upper wick’ or ‘tail’ in years. In fact, we haven’t seen an intraday reversal of this scale since August 2015 – making yet another point of comparison to that period of trouble after the worst three-day loss since that period. 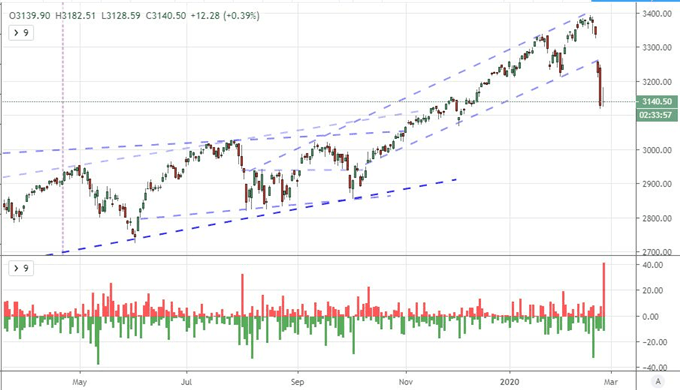 The question of conviction is increasingly important. That may seem obvious and even pedantic; but I’m not referencing trend, rather the market’s propensity to respond more willingly and intensely to bullish or bearish developments. There remains a strong correlation among risk-leaning markets even if they are not committed to unchecked momentum. Yet, the effort to leverage any and every favorable development into a full scale rally is noticeably lacking through progress. It is possible that there remains a level of discount at which the appeal for ‘buying the dip’ would be simply too great, but we don’t seem to have hit that threshold yet. The further we fall on benchmarks like the SPX, the greater the threat to the sanctity of a bullish default. In the meantime, contrarian readings like the retail CFD positioning behind this particular benchmark reflect a heavy shift towards holding to the status quo. It is difficult to say whether fundamental theme collapse, critical technical barrier breach or a sudden liquidity flush will signal the ultimate collapse; but keep tabs on the broader market. 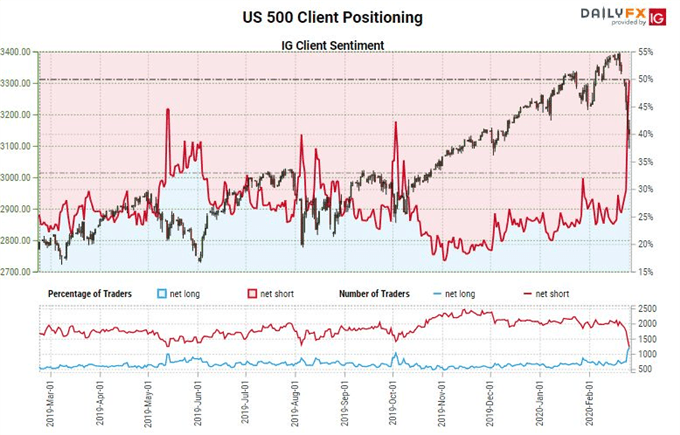 Economic Trouble and the Options to Fight It

In a world ruled by sentiment, fundamentals are more contributor than conductor of market behavior; but they nevertheless deserve our attention. In looking for the larger systemic currents that scheduled event risk feed as tributaries, the abstract interest surrounding the coronavirus spread is still the most accessible fear. Headlines like skepticism over the peak in Chinese cases, dispute over US exposure and fresh instances of infection from countries like Brazil are proving the disturbing norm. That does not seem to be what is moving markets however. Perhaps the most noteworthy consideration on this front the past session was US President Donald Trump’s assertions that main stream media was creating a panic to foment market fear – not far from the ‘if it bleeds, it leads’ trope, but the markets themselves are no so easily swayed unless they fear something themselves. 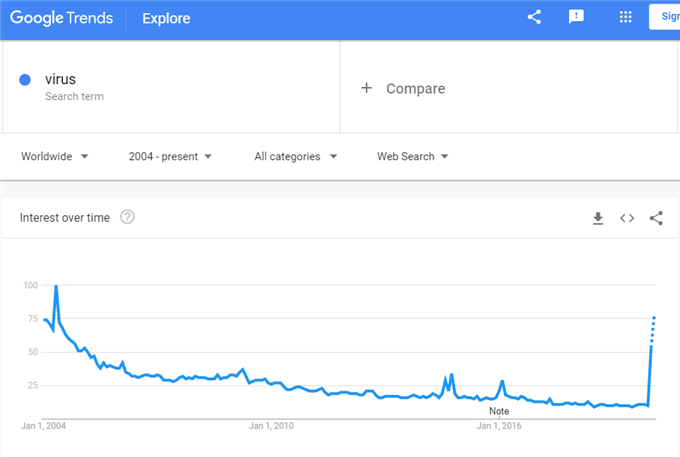 The more economically-significant connection that such abstract risk represents to global growth is where the proverbial rubber hits the road. That is perhaps where the growing list of warnings carry more weight fundamentally. This past session, there were a host of additional concerns listed by reliable groups, but it was credit rating agency Moody’s cut to the 2020 auto sales forecast and Germany’s DIW tepid 1Q economic view coaxed by virus uncertainties that really registered. Given the alternative and past months/years’ concerns, it is easy to imagine that the momentum could prove self-sustaining even if the cases peak globally. It is therefore worth watching response to efforts like Hong Kong’s $15 billion in spending recently announced in its budget and the regular infusions of stimulus by China.

Shifting from systemic turbulence to regional influence, the Dollar remains one of the more interesting measures in the list of markets for which I regularly keep track. The rally through the first seven weeks of the year has apparently lost its traction for the time being even though risk aversion has swept in. The Greenbacks haven status doesn’t seem a blanket boon for the bulls while relative growth and yield are much more fluid in these conditions. As for the latter consideration, the probability of multiple cuts through year end have risen significantly. 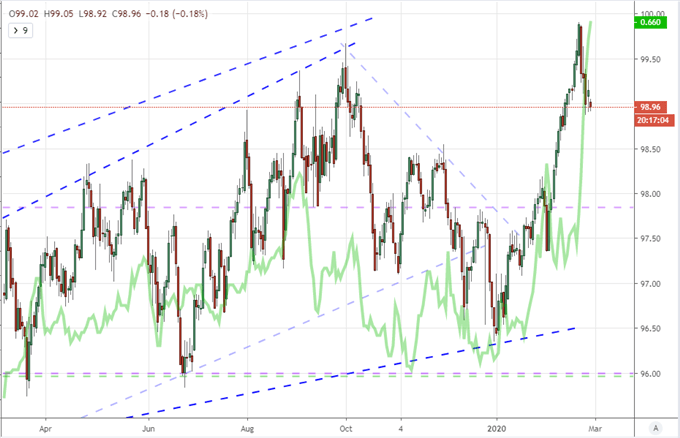 Elsewhere, the British Pound seems to be taking an active interest in the proceedings of trade relationships the country is trying to forge after its official separation from the European Union. Though the EU’s Michele Barnier remarked the region was ready to offer the UK ‘super preferential’ access to the common market, the warnings that conditions will not be made better than when the country was a member seems to be lingering. GBPUSD dropped back to test its H&S neckline while EURGBP tested multi-month resistance.

Then there is gold. I will be watching this precious metal far more closely through the coming days and weeks. The commodity rose alongside equities this past year which is unusual enough for a renowned safe haven. Yet, the conditions seem to be related to Gold’s appeal as an alternative to devalued major currencies. There is little doubt fiat assets are taking a hit from the easing of the past decade and anticipation for more in the near nature. How strong this belief that central banks and governments have been pushed to the brink are best registered by the Dollar in my view. 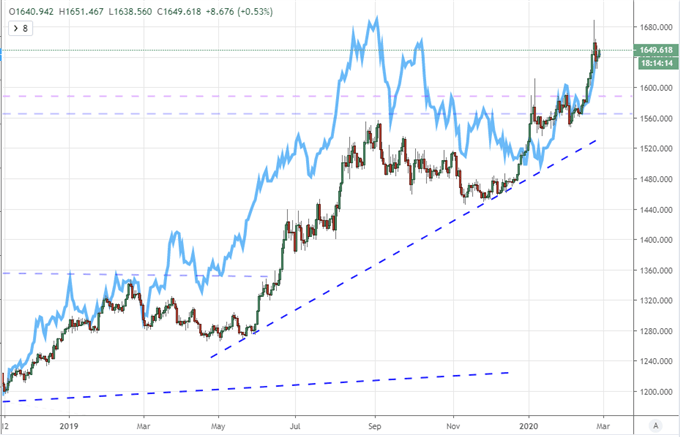