S&P 500 and Dow Suffer Sharpest Tumble Since August 2015, Closer to Self-Sustaining Risk Off

There have been a number of instances in the past few years where intense bearish pressure has appeared suddenly across the global capital markets just to retreat as quickly. These bouts of upheaval are not that uncommon in an environment where complacency and deemphasized fundamental risks eventually spill over into sentiment. Yet, the appearance of volatility does not guarantee that a full-tempo trend reversal is at hand. Conviction in a complete reversal of course takes significant influence. While there is much that goes into such an environmental shift, I look for correlation and intensity in risk leaning assets. As for intensity, this past session has maintained a remarkable pace. The benchmark US indices, which have paced their peers, nearly matched Monday’s gap-charged plunge to extend the worst three-day S&P 500 and Dow performance since August 2015. That means intensity that outstrips the plunge through the fourth quarter 2018 and even the reversal that start it all two years ago. The spark in 2015 was fear that a Chinese Yuan revaluation (some say devaluation) would lead to compounding problems. Today we have those problems unmistakably in the background and the market is waiting for a reminder. 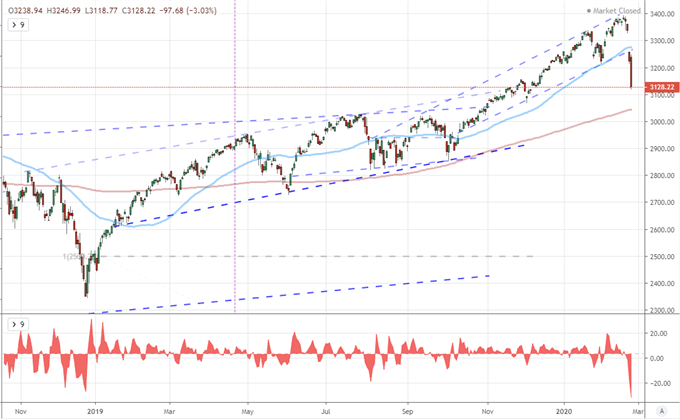 If we are to make the transition from a short-lived but painful market swoon to a spiraling trend, there are a few conditions that I would expect to see. A sustained selling pressure is definitely a product of such a dire situation. That would be a measure of intensity which shows active deleveraging. Yet, in addition to that drive, there would be breadth of ‘de-risking’ which raises the correlation of assets that qualify for representation of ‘risk’. We are seeing this combination at work at present, but keeping the tempo up beyond a few days is a different level unto itself. Some – whether they appreciate it or not – would put their emphasis on subsequent measures of technical support giving or the impact of further iterations of fundamental event risk I will take into consideration both matters; but more than anything else, I’m looking for evidence that sentiment itself is the motivating factor. Should we start from a position where fear is the prevailing force to fuel bad news and deflate good, my concerns will grow significantly. 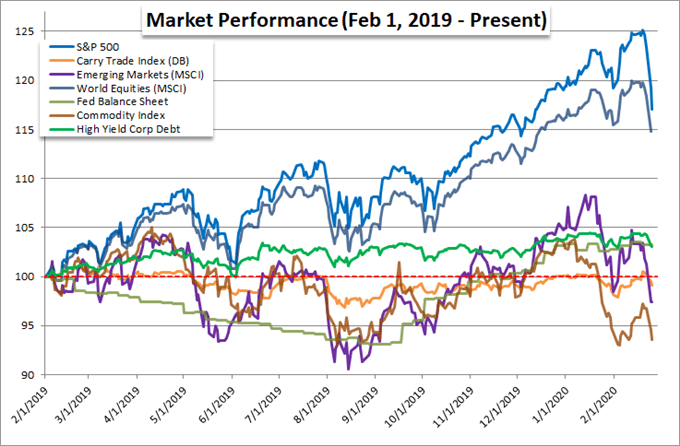 When underlying sentiment is the defining feature of the landscape, any fundamental ignition can drum up significant change in the market. In the meantime, the accelerants along the way should be monitored for their inflammatory properties. The coronavirus remains the most prominent concern. We have seen the WHO warn that the scale of the risk is not being full accounted for; that cases have spread from Italy out to Austria, Spain and Croatia; and new corporations are warning that their businesses will be negative impacted by the situation. It is that economic influence that matters most n my book. Sheer numbers of headlines associated to COVID-19 are dropping according to Google Trends. The fear now is that this abstraction will jump the economic barrier. 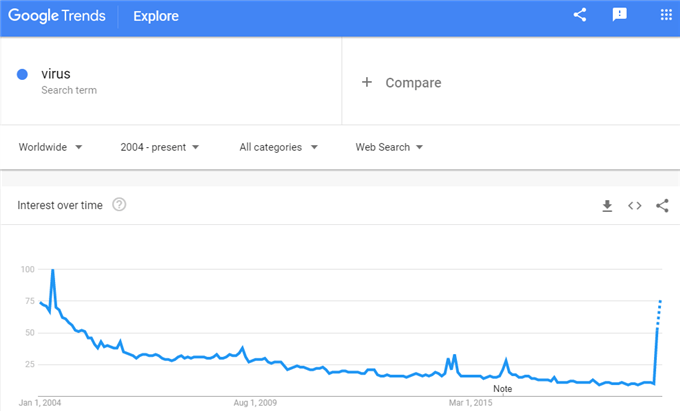 With this increased focus, I will first and foremost concern myself with growth projections. With such a significant fundamental hiccup, seeing the outlook for the global economy take a blow would be a reasonable expectation. For growth readings, we’ve had little to operate on thus far. The Chicago Fed’s National Activity index was a disappointment, but US consumers showed little concern through the Conference Board’s sentiment survey with a sharp jump in expectations. In the meantime, as economic hardship increases, the hardship added by protectionism will become clearer. I am also a close observer of monetary policy effectiveness (ineffectiveness). If the avalanche accelerates, the Fed and others will be expected to step in. Their capabilities after cutting rates to/near/below zero and pursuing QE leaves little to the imagination. 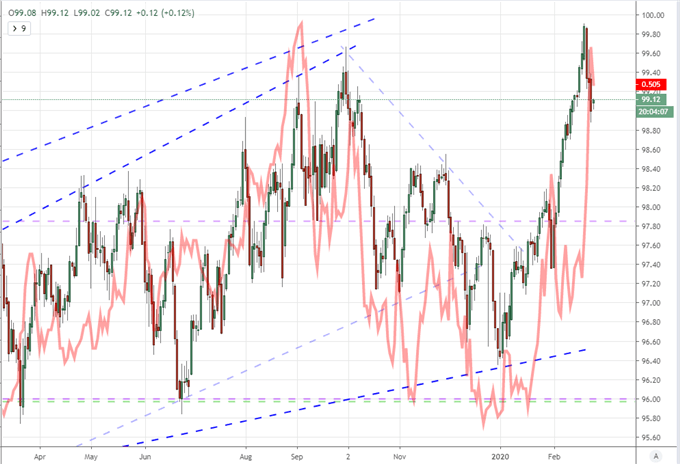 Why Would Gold Slip on a Day Risk Aversion Was Overt?

Meanwhile, a question I fielded multiple times this past session was: why did gold (a safe haven) drop back this past session despite the risk aversion registered in other assets. Correlations are important, but they aren’t strictly defined through all eventualities. Relationships are established through a financial connection. So why is the commodity treated as a haven? Owing to its historical role as an alternative to traditional fiat assets. We have seen the metal rise alongside US equities these past months, so it falter should not be considered a sudden deviation from assumption. This asset is most prominent as an alternative to traditional currency (Dollar, Pound, Yen,etc), which finds the Euro stepping up to take the US Dollar’s slack. There was certainly weight affected on Gold this past session, like a broad bid for the Euro as the second most liquid financial system, but I am not awaiting its coming to pass. 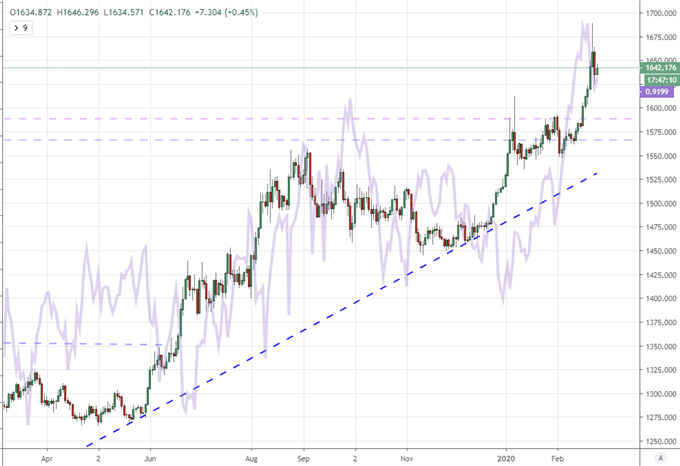