Dow Posts Biggest Gap in a Year, Dollar Rallies Ahead of US Growth Proxy

A Sharper Rebound in Risk Draws in Speculators’ Attention

Monday brought a sense of stability to a frantic sense of a collapse in risk assets stoked through the end of the past week. However, the week’s opening session was mostly gap and not much follow through – not to mention it was complicated by the sharp bearish adjustment made by Chinese markets reopening after a long holiday period. There are, however, fewer caveats to the state of global investor sentiment registered across the system this past trading day. A firm bid arose for a wide swath of risk-sensitive assets Tuesday which taps into my preferred measure of underlying intent: a combination of correlation and intensity of movement throughout those markets with a clear risk profile. Once again, the movement seemed to earned in greater proportion through opening gaps rather than follow through in active session. That in itself doesn’t raise great concern but it is something to watch. 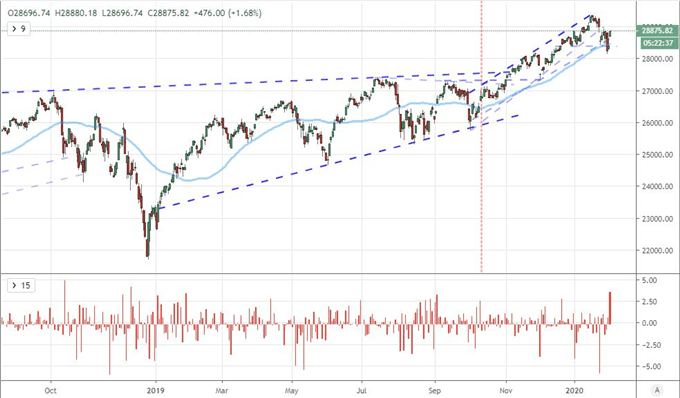 Perhaps the most impressive performance was once again registered by the US indices. The Dow Jones Industrial Average put in for the strongest overall daily rally in months, but it was the scale of the opening gap – the largest since December 11th, 2018 – that was most remarkable in statistical terms. If the qualifier was general height, then the top performer was the Nasdaq which rallied to record highs. Even this moderate divergence among supercharged benchmarks reinforces a sense that market participants are putting greater stock into momentum rather than value or even an unabashed reach for yield. We can see that appetite in a comparison of Tesla to the Nasdaq, the Nasdaq to the Dow, US indices to global counterparts or equities to other such assets. With this uneven performance, traders are left to wonder whether a charge to multi-year or record highs as with the Nasdaq or a limited charge within larger congestion like USDJPY is more indicative of what the markets are capable. I default to the latter. 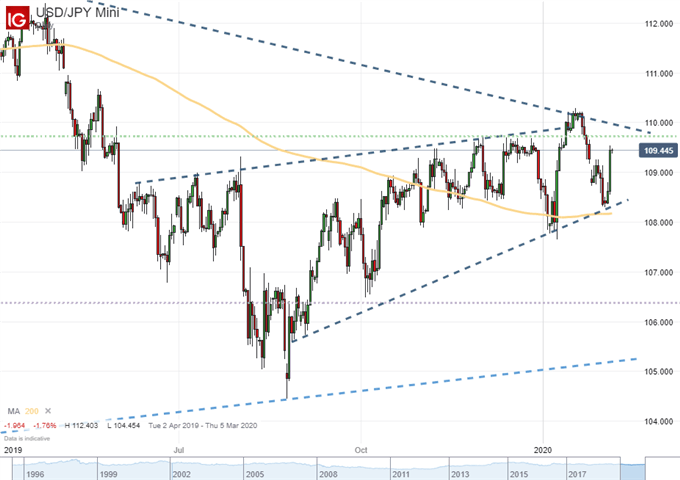 For fundamental course setting, the market-based fear around the spread of the coronavirus seems to have eased back. This is not to say that the coverage has abated – it has not – but the financial sensitivity to the matter has lost obvert traction. We can see that in the general course of risk trends and its benchmarks. However, I like to reference those measures that are more directly linked to the matter and its particular locality. Consider the questions raised over China’s economic health following their substantial measures to halt the spread of the virus. Despite that, the USDCNH has slipped back below the 7.0000-mark, AUDUSD has bounced off of significant support – even though the Dollar was performing well this past session – and emerging markets are generally showing recovery. 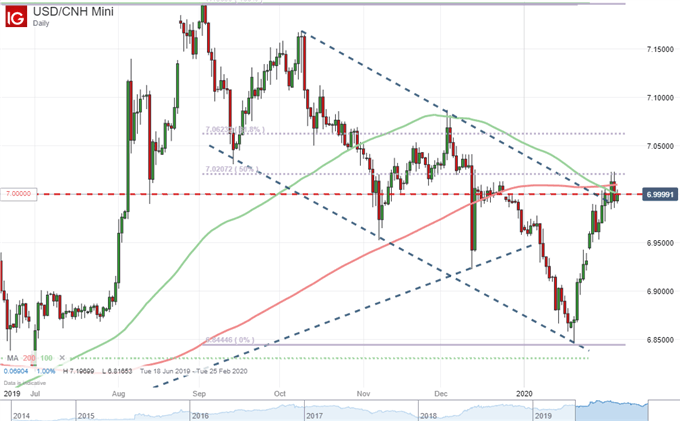 In turn, growth seems to be in a position to wrest back the yoke from fundamental watchers. In this recent rebound in ‘risk’ signals, the measures that split their attention with economic activity earned some much-needed relief. Copper posted its first advance in 14 trading days while the US 10-year to 3-month yield curve corrected to at least technically squelch the recession signal the measure traditionally casts. The exception was oil which extended lower for a fifth consecutive session (down 10 of the last 11 trading days). On the data front, there were a few indicators are note such as US factory orders, UK construction activity and Mexican manufacturing which all showed marked improvement over the previous month. The top listing in my book was the IBD economic sentiment survey which hit a January 2004 high – though this is an indicator that seems to follow capital markets more closely than actual economy. Ahead, there is an indicator that can quickly undo much of this good will: the ISM service sector report. The sector accounts for over three quarters of output for the world’s largest economy and it has held out against the crushing tide of slowing growth. If it finally capitulates, the shift would no go unnoticed. 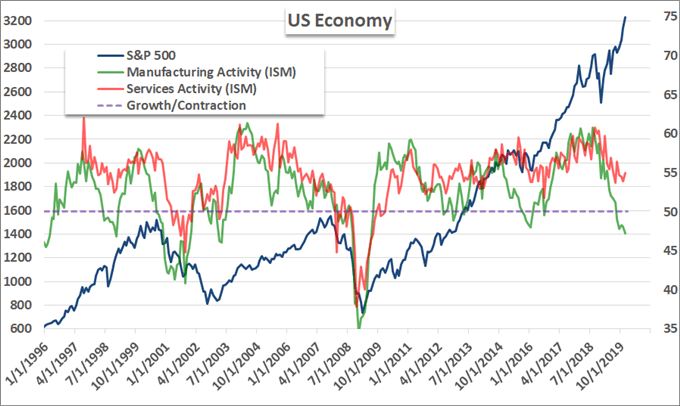 Aussie Dollar Elements Align and Did President Trump Hint at the NFPs?

Outside of the enormous gravity of the top systemic fundamental themes, we have a few high-profile assets that seem to be buffeted by their own fundamental developments. The Australian Dollar is once such currency. The relief from the coronavirus fears registered with the USDCNH – a downshift in attention rather than actual improvement in circumstance – seemed to buoy the Australian Dollar as well. That is not a point of reliable lift for the currency, but further relief is possible…if the spread of the virus or the Chinese government’s aggressive response were to reasonably abate (which is unlikely). That said, there was supplementary ‘relief’ from the RBA which decided to hold its rates unchanged at 0.75 percent while swaps were pricing in a better-than-even chance of a 25 basis point rate cut. That respite will stretch only so far, but the technical picture from the likes of AUDUSD presents a fundamental spark with a technical range and in a market that is more prone to congestion. 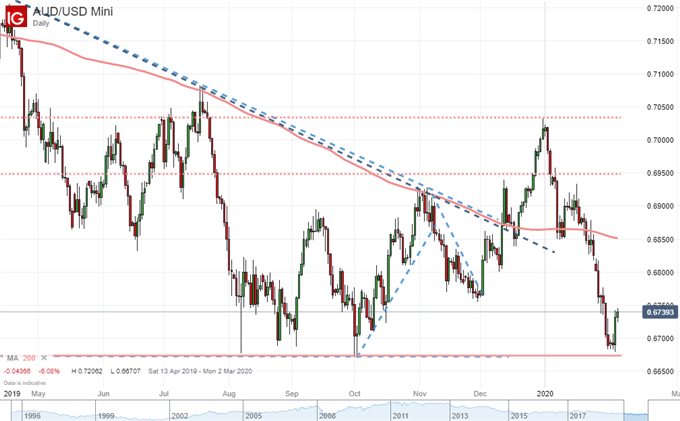 Another currency worthy of attention is the US Dollar. Many retail traders intent on finding breakouts or the unusual trend would dismiss the Greenback out of hand given its disposition towards ranges, but this is a tempo that more accurately reflects the circumstances of the financial system. With the DXY Dollar Index, the range that has come on the back of the most restrictive one-month (20 trading day) ATR in recent record still holds true. That reinforces technical situations like the USDJPY or less precise ranges like EURUSD. Yet, pairs like the GBPUSD and USDCAD are further suggestion that ranges are not the ‘odd man out’ in the market. In the meantime, volatility is still possible. The ISM service sector report is top listing for my watch list, but FX traders would do well to note the ADP private payrolls. While the indicator is not particularly accurate when it comes to predicting NFPs, it will certainly raise interest in the Friday report one way or the other. 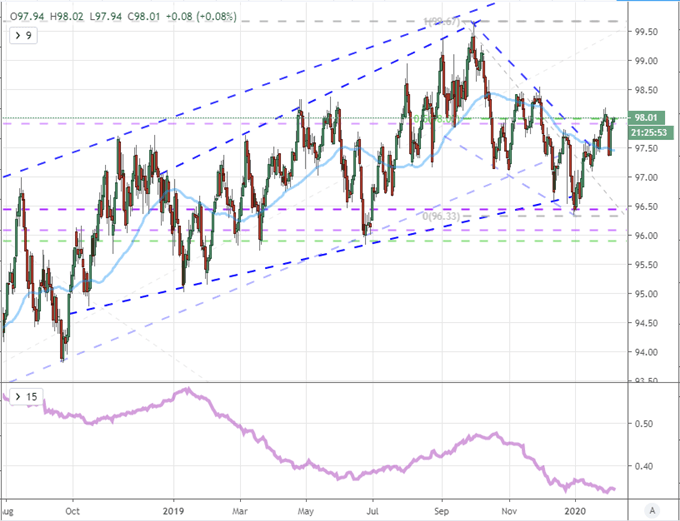