China Stocks Gap Down Doesn't Pull Dow or AUDUSD With It, But Oil Slide Persists

How Effectively Has the Market Accounted for China’s Reopen?

Last week ended off with a significant warning of risk aversion across the global capital markets. Friday’s tumble for the likes of the US indices, emerging markets, commodities and more; had many on edge about the contagion in fear that seemed to be slowly establishing itself in overt fundamental headlines. With discussion around the coronavirus still crowding out headlines, there remained a tangible concern for speculative fears to maintain a positive correlation to the number of mentions the virus earned in the international press. It was against that backdrop that Chinese markets reopened after an extended holiday. The result was severe but not exactly unexpected given the slide in confidence and its concentration around the Wuhan China outbreak. The benchmark Shanghai Composite posted an approximate 8.7 percent gap lower on its open. What was more impressive than the scale of that move though was that it wasn’t a record. There was a larger close to open adjustment back in December 1996. 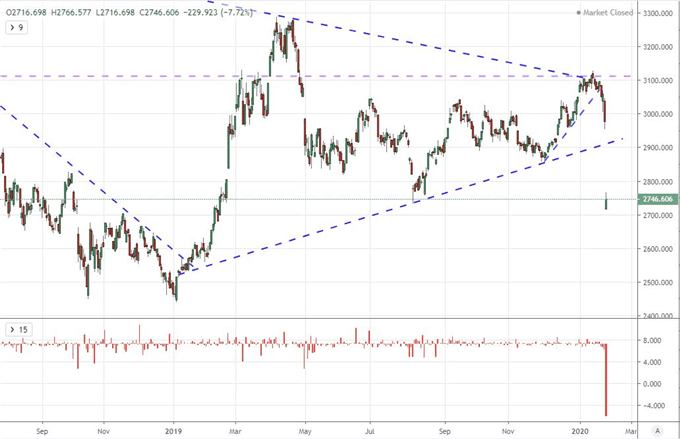 Despite the severity of the gap and ultimate change on the day for Chinese benchmarks not to mention how raw Friday’s broader sweep in risk aversion was for global market participants, my list of usual risk suspects didn’t simply fall into a selfsustaining wave of deleveraging. In fact, US indices gapped higher and spent their morning on the bid (though much of the gains were reversed), USDJPY and carry held support and even emerging markets (EEM) pulled up at least temporarily from a steep decline. This pause would be an opportunity for a favorable fundamental to step in to reinforce an increasingly flimsy effort to ride complacency. That said, there are few truly encouraging signals scheduled on the docket for risk takers to look forward to at the moment. 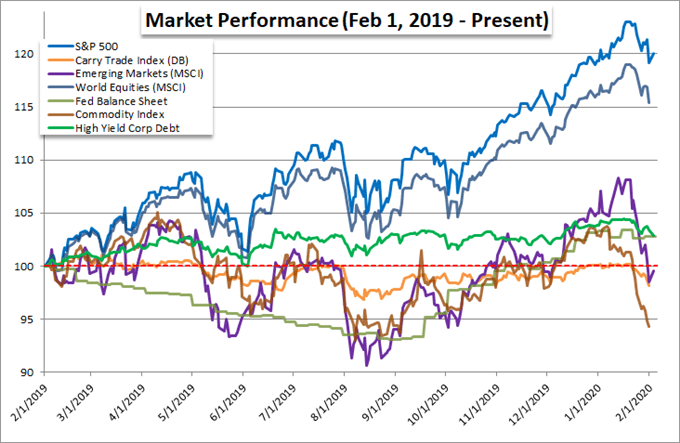 As we move forward waiting for the next event or headline to stir the market to life, it is worth keeping the coronavirus concerns at the top of our watch list. Global Google search interest in finance related queries for ‘virus’ has overtaken ‘growth’ (a natural term) for the first time since the search giant offers data back to 2004. This raises concern but it is also stirs a familiar expectation. Central banks have catered to a strong demand among market participants this past decade, stepping in to fight off crises. The repeated waves of support have created a Pavlov like response in the markets where any sign of trouble is expected to matched by a deep-pocketed external influence. This translates into government support where the monetary policy authorities are starting to fall short. China announced to start this week a 10-basis point cut to the repo rate and a 1.2 trillion yuan infusion of liquidity to short-term lending. Reports that the government is also seeking flexibility on the Phase One trade deal with the US shows a strong and practical response.

Chart of USDCNH with 100 and 200-Day Moving Averages (Daily) 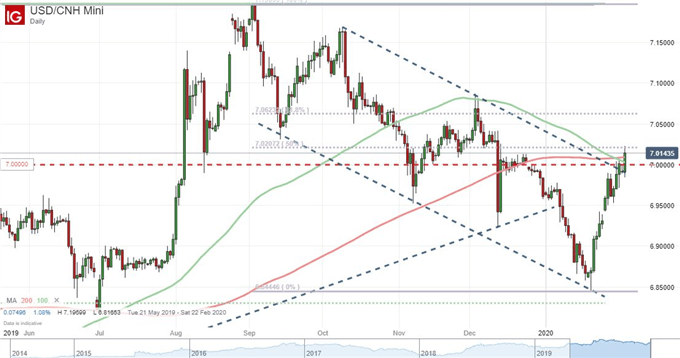 The risk that we face in the face of another external pressure is that barely-maintained trade relations will falter under the pressure of economic trouble. Further, central banks’ inability to address yet another round of pain could be laid bare at a critical point of financial uncertainty. This is set against the more measurable slide in economic health. Against the promise of support from the Chinese government, authorities suggested the 2020 growth target could be revisited and data showed a -6.3 percent drop in corporate profitability. What’s more the growth troubles are not isolated to China. A range of growth figures recently have reflected upon an unsettled global economy – though the US manufacturing sector, as measured by the ISM, finally popped back above the 50.0 mark. In the meantime, growth-oriented markets like copper, oil and US Treasury yield curves continued to flash warnings signs Monday. 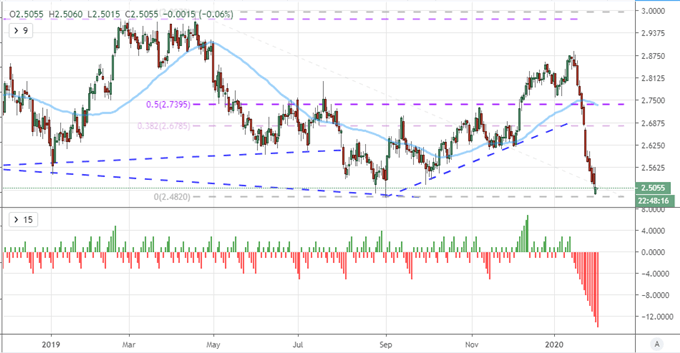 As we await for the next big wave to take the market on a measurable trend – bullish or bearish – there remain isolated areas of noteworthy market movement or opportunity for volatility around certain event risk. The US Dollar is one such interesting case. The notion that the Greenback is taking on the role of a safe haven was challenged when it dropped sharply this past Friday. That said, the recovery Monday for the DXY was the largest since September 25th and didn’t seem to align to traditional data or even sentiment assumptions. The British Pound’s drop Monday was similarly severe in a move that was measured throughout its crosses with a halt to a wedge breakout for GBPUSD. The data on hand didn’t seem to support the severe move, while chatter around the official UK-EU separation that took place at the end of last week stepped in as convenient explanation. 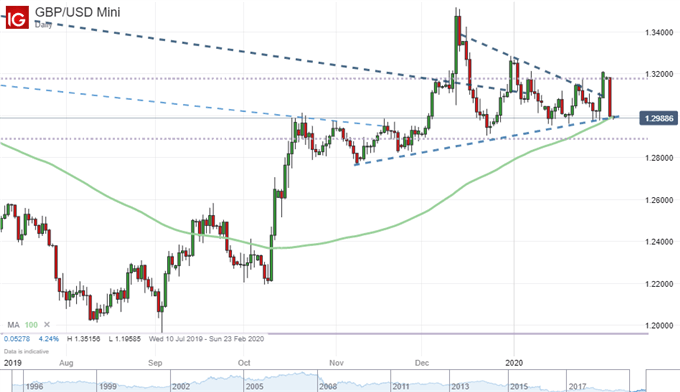 Elsewhere, despite its great sensitivity to the bearings for Chinese markets and the Yuan itself, the Australian Dollar did not continue to slide despite both China’s capital markets gapping lower and USDCNH moving above the 7.0000 mark. Though we have seen a day’s break in relationship between currency and theme, I consider this an inextricable connection to watch moving forward. That doesn’t mean we can ignore local event risk for the Aussie Dollar however. The RBA rate decision Tuesday morning is expected to deliver a rate cut which means there is considerable speculation on hand.

Chart of AUDUSD and Retail FX Positioning with IG (Daily) 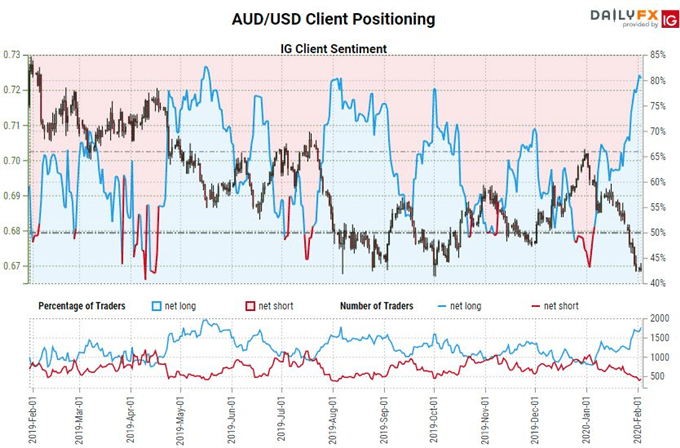