Recommended by John Kicklighter
What are the DFX analysts' favorite opportunities?
Get My Guide

Is Phase 1 a Trade War Breakthrough and a Windfall of Risk Appetite Behind It?

Risk trends were on uneven ground this past session, but anticipation was high heading into Wednesday's well-publicized US-China trade deal sign off. The 'Phase 1' deal has been around in conceptual terms since October, but the very first stepping stone towards a reversal of the most growth oppressive trade war was only made tangible in the final weeks of this past year. Heading into the diplomatic event, expectations are already being managed down. According to reports this past session, the details are unlikely to be listed at this meeting (SCMP) which shouldn't really surprise. Nor should the recently stirred fear that two sides would not be making a deal on the $100's of billion of products currently under tariff. It was always the case - from conception - that Phase 1 was always a good will first move to shift from steady escalation to the first easing of tensions, even if mild. Nevertheless, the headlines and investor conversations in social media seemed to project surprise that the two sides would not be announcing a reduction in the $360 billion in tariffs in play at this event. 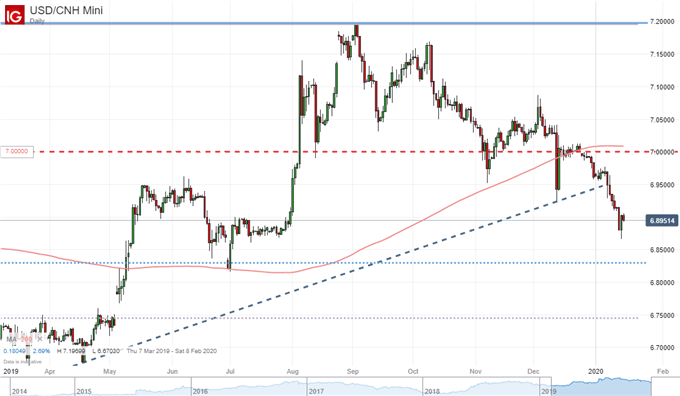 Disappointment around the reach of the US-China negotiations is most reasonably reflected in the USDCNH exchange rate. However, my interest is in how responsive more traditional risk-based assets are to the news - as it crosses the wires. There has been an unmistakable lift in common sentiment across the financial system that has some its basis in a thawing relationship between the world's two largest economies. How far has the relief rally stretched relative to the realities of their compromise? That will define how long risk appetite's recovery will stretch. Through the rise in US indices, the EEM emerging market ETF and AUDUSD, it seems expectations were set higher than what the two sides advised. That may render a strong rebalancing response from closely-associated capital market assets; and speculative bulls should take note...and so should opportunistic bears. 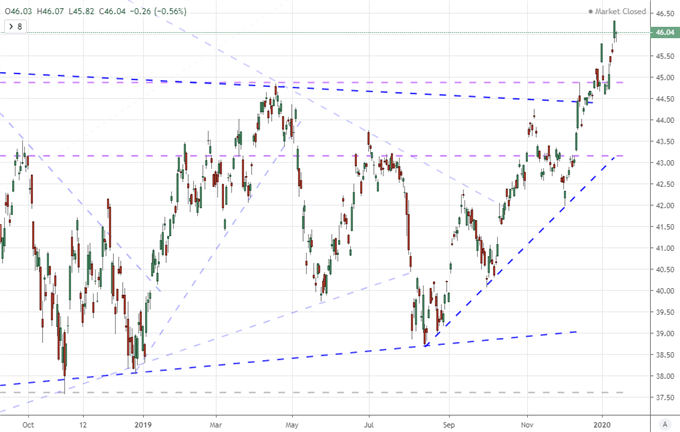 In other trade news, the USMCA vote seems to be still on tap for review by the Senate today. This is one trade front for which an optimistic view isn't overwrought. That doesn't easily translate into significant moves from benchmarks like the US indices, but it does ease the perspective of a global spiral. I will be watching USDMXN and USDCAD closely with this potential event in the backdrop. An improved trade situation would benefit the higher risk Peso and Canadian Dollar against the haven Dollar, but reserve your conviction for more serious moves. 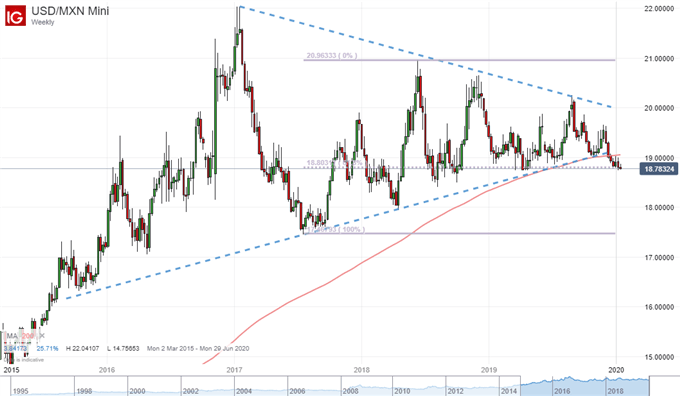 Trade wars is easily this coming session's most important market moving theme. That said, it isn't the only worry on tap. US earnings touched on both distortionary monetary policy and growth expectations this past session. On the former point, Wells Fargo announced a near 50 percent drop in profit on legal fees and low rates. I've spoken on the benefit/cost of low rates before, but it is remarkable that banks are starting to highlight the challenge at the same time certain Fed officials project their concern that extreme easing is promoting aggressive speculative build up. It may be sustainable for now, but it is not sustainable for the long run. 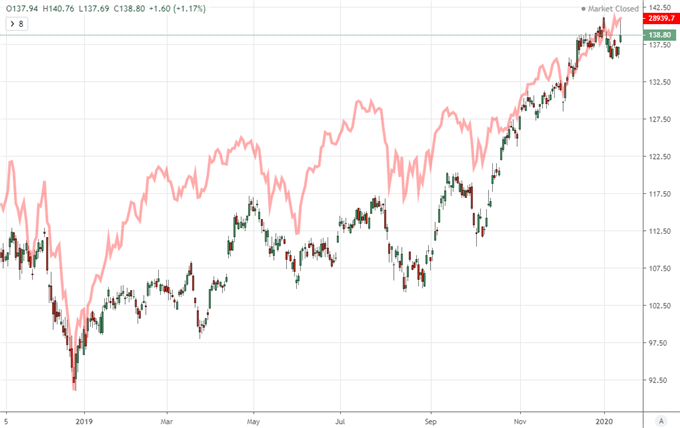 Despite the detrimental aspects of the earnings season opener, we would also be met with weighty targeted data reports. In Asia, Japan's Eco Watchers report lowered its outlook from 46.8 to 45.4. In the US, the IBD economic optimism survey rose to an 8-month high (57.4) but US small business sentiment from the NFIB unexpectedly dropped (to 102.7) to reflect on the compounding pressure in the system. There is more banking sector fodder ahead, but I'm more interested in trade war / growth aspects of the CSX update due Thursday. Additionally, proving that all news is not good news for risk assets, it was reiterated by a Fed official this week that progressive easing encouraged excessive risk taking and the unstable speculative mix in which that view results.

The three dominant themes that I follow - trade wars, growth and monetary policy sanctity - will continue to exert a heavy hand on the market, for better or worse. The US Dollar seems to be unconnected to the development in financial and economic stability imitating from financial developments. For the DXY Dollar Index today, the interest around rate forecasting from the Fed has eased without a consistent time with which to work with. The ICE index has been stuck in congestion for months. A strong motivation from members could drive it back to life with the benefits, but I am inclined to believe the Greenback remains conflicted about its principal role - an uncertainty that needs to be cleared down the line.

When evaluating the DXY or EURUSD there are clear technical boundaries in play. The Greenback is struggling to return to its base from a few years ago, though for good reason. The world's most liquid currency has straightforward safe haven properties, but it is also a candidate chimaera. After the US CPI essentially fell in line with expectations, the reticence by London to find comradery with such events and raise further concern locally. 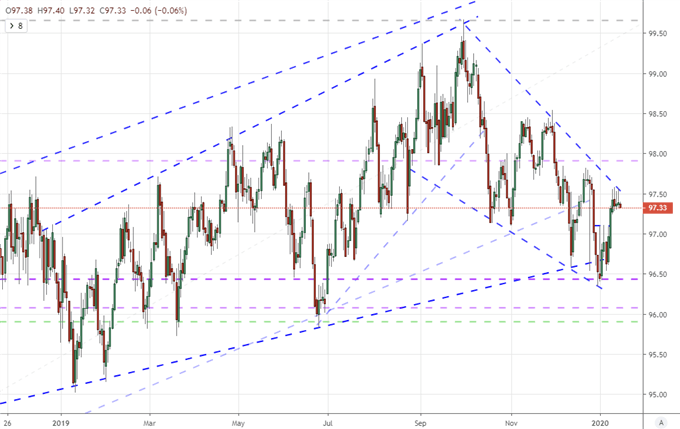 Finally, we would delve into the first stage of broader trading conditions. Taking a look at the Yen crosses and US indices, there are new tentative highs to contend with alongside well-established complacency from the past year. I am particular mindful of the technical boundaries being reached by pairs like USDJPY and GBPJPY. Pushing the boundaries on multi-year technical ranges warrants a closer look. When the systemic motivator is agreed upon, there could be some remarkable, friction-free momentum ahead. 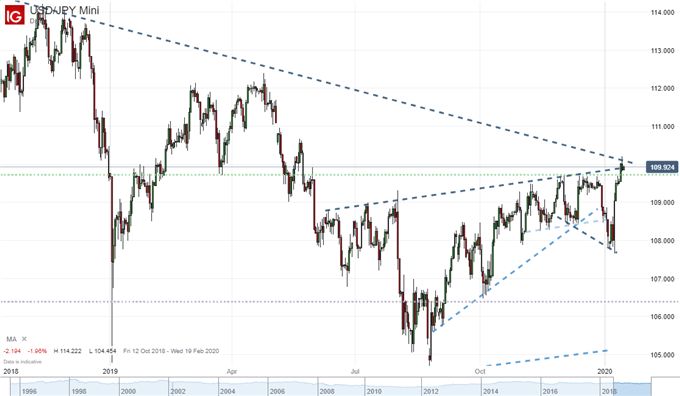