Our Bout of Geopolitical Risk Furthers the Market's Sense of Invincibility

If you, like me, were worried that the exceptional quiet that plagued us through the end of 2019 was going to persist into the new year; this past week might have raised your optimism. There was an unmistakable swell of volatility that hit risk assets and definitively struck crude oil. Yet, this aggressive swinging was clearly not a systemic change in our underlying market conditions - which could provide more consistent opportunities of technical breaks and trend development - but rather an unexpected and acute event risk. The US drone attack that killed a top Iranian general January 2nd found its retaliation this past Tuesday evening. The selloff in S&P 500 futures after hours and surge in oil immediately following the news gave us a glimpse of the market risk that we were facing. Yet, those fears quickly abated when Tweets and official rhetoric from both sides was interpreted as a measured pullback by both countries. It is likely that we see further developments on this front moving forward, but more so on the diplomatic and economic sanctions side. The market though, defined by complacency such as it is, has little concern for that. 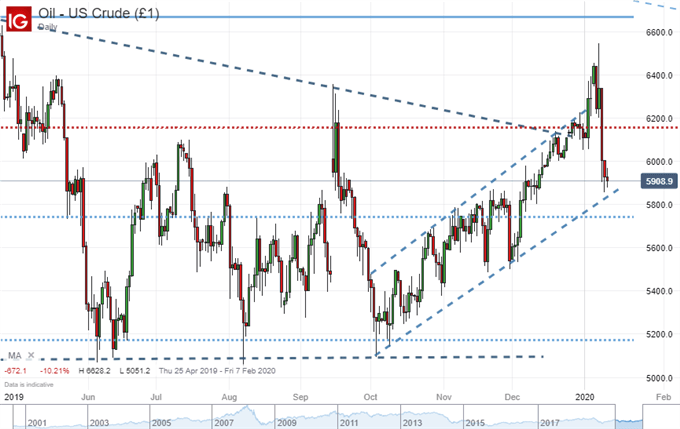 Though it is not exactly new, it is still remarkable to me that we have an event with such incredible potential for fallout like the US-Iran attacking each other, and there isn't even a modest, pre-emptive effort to de-risking effort. Some may take this as a sign that the bullish conviction is simply indestructible, but I see it more as a signal of desperation. Rather than feel a healthy market that is willing to lower risk and replace it when threats arise or uncertainty increases, an absolute FOMO (fear of missing out) leads market participants to hold onto their exceptional risk for fear of missing out on the moderate rate of return than can make in this low-yielding and measured-pace market. That doesn't register as conviction for me. My cynical side encourages me to remain vigilant to act when real cracks in sentiment form while my pragmatic mind prefers congestion setups.

Looking ahead to next week, I will certainly watch for unexpected escalation in the tensions between the US and Iran. We left off this past week with fresh sanctions from the former and warnings of 'harsher revenge' from the latter. That said, this is fairly close to status quo when it comes to this situation. Instead, I will look to scheduled event risk to stir more familiar themes that the market has shown a fair consistency with its reactions. Though it was the not the top interest in my poll, I will be watching growth in particular. The high-water market for a seismic shift in risk trends through tangible recession fears is difficult to reach. However, there is a wide range of readings that can generate specific points of volatility or aggregate enough improvement or deterioration to rise to the scale of global potential. UK GDP, Japanese economic sentiment and US retail sales are lower level in comparison to US earnings through the week or the 4Q Chinese GDP on Friday; but the latter has a tendency to fall close to forecast and it is an end-of-week release. 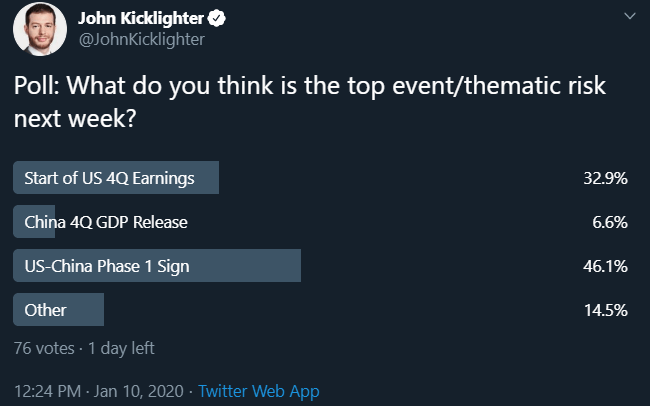 As can be seen, the top theme from the initial numbers from the poll, most put the greatest emphasis on the Wednesday scheduled signing of the so-called 'Phase 1' trade deal. This was announced back in October, but the US and China had wavered until the late December when there seemed a risk that investor and constituent confidence could falter without something tangible. We could very well get some detail on what exactly this deal will entail when they sign, but I suspect it will still be vague where it counts. Given that the market already fully anticipates this, it would struggle to carry a strong follow through on risk trends. If they delay, it could be conversely very market moving in risk aversion. Yet, we don't have to just look at stretched risk assets. Consider AUDUSD which is closely associated to the health of China and has an impressive technical effort underway - trying to reverse an oppressive bear trend. 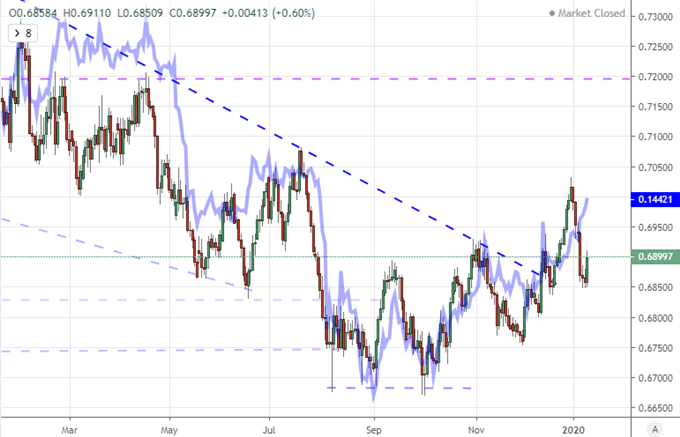 Watching Australian Dollar for Trend and the Greenback for Range

For specific assets to watch for opportunities of convergence between market conditions, fundamentals and technicals; there are a few highlights. Looking for a serious trend - one with pace and not just a creep - is like trying to find the one stock that was rising when the roof was falling in during the Great Financial Crisis. The Australian Dollar may present some potential if indeed the market takes an optimistic view of China's outlook if it can walk a path to reversing onerous trade wars. Though given their effort to slow their economy and test defaults for financial stability, long-local assets is risky. A USDCNH could respond, especially as it would ease the pressure from the White House. That said, AUDUSD is also discounted and trades more freely. Other Aussie crosses worthy of consideration include AUDJPY and AUDCAD. 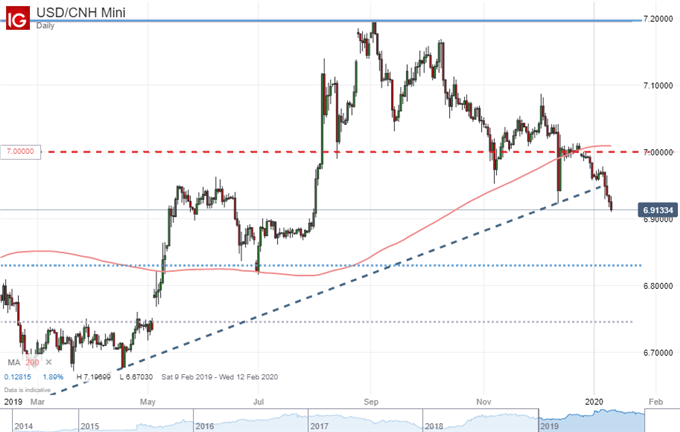 If market conditions continue to default to uncompromising risk appetite with little opportunity for value, then the more prominent feature of the landscape would be congestion and restraint rather than the mild bullish bias in risk-leaning assets. That makes range opportunities - and false breakouts - more appealing in the grander scheme. One of the most mired currencies for this situation is the US Dollar which is conflicted between multiple roles and hosting some oppressive technical boundaries. EURUSD and USDJPY are particularly well-defined in this regard. 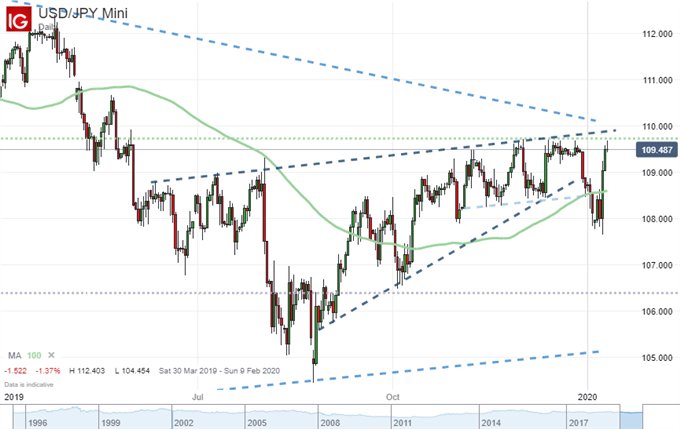