With only 48 hours of active trading under our belt for the fledgling 2020, it would be natural to assume that we were dealing with quiet trading conditions as speculative interests slowly thawed from the holiday freeze. What we have experienced was exactly the opposite of that gentle slope for global investors to slide back into the market. If we were left to the 'traditional' systemic themes that I have been keeping track of through the past year, we could have very well rode out all but the most shocking developments - a clear recession signal, US-EU announcing a full-blown trade war or central banks warning they have lost control. Alas, a familiar but sidelined threat was restored Thursday evening / Friday morning: geopolitical tension.

This is an all-encompassing term that simply highlights the economic and financial risks that arise from open hostilities between superpowers. The relationship in question at present is between the United States and Iran. The US initiated a drone attack on an Iraqi base where high level Iranian military officials were present, resulting in the death of a top Kuds force general among others. Tensions were already on the rise between the two, but this is significant escalation from the perspective of a market. And, unlike the oil shipping related seizures some months ago or the mere potential in the breakdown of the nuclear deal, this is a kinetic situation that could quickly escalate to a full military war. With such stakes and no discernible timetable, this unpredictable situation can trigger lasting shockwaves in an otherwise reliably complacent market. 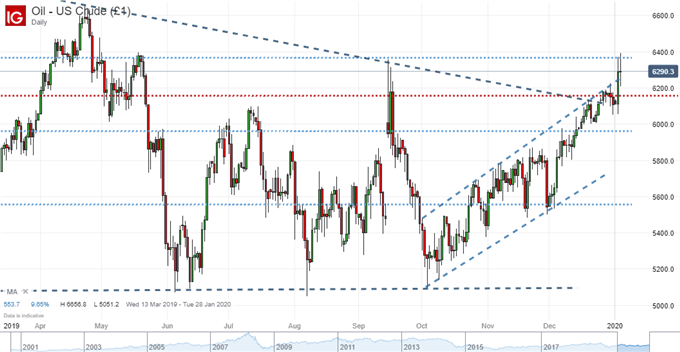 From the market perspective, I am particularly concerned over the gaps that can occur during downtimes, when exchanges are offline or liquidity is naturally low. In such conditions, the volatility response can be much more severe; and we are more likely to push a tipping point of self-sustaining fear. Gaps over the weekend are actually fairly common as of late. Yet, a gap predicated on this situation and with benchmarks like the S&P 500 at record highs can catalyze a lasting burn in the financial system. Market your exposure well. 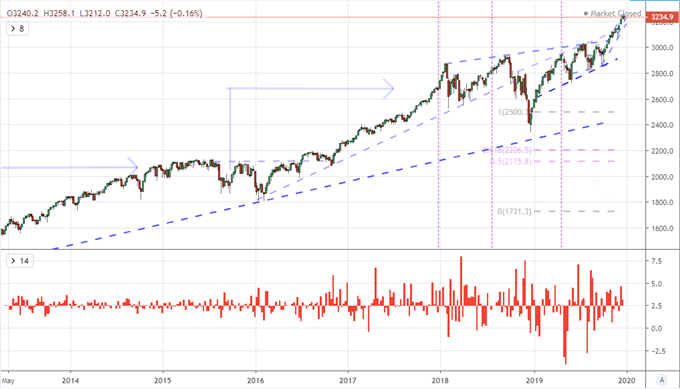 In the Event US-Iran Tensions are Subdued, Trade and Growth Will Take Center Stage

As significant as the risk is in the US-Iran standoff, we could find ourselves in a hold on actions as both sides weigh the consequences of further action. That alone could keep sentiment anchored, but we will maintain a bias of bearish caution until it is actually resolved. That can further position markets such that more prosaic themes trigger a mass de-risking. Trade remains a high level concern among most global macro traders. The US-China situation seems to be leaning towards improvement with the two due to sign off on the Phase 1 terms on January 15th, but that anticipation is already priced in. Unless Phase 2 is seen as being a practical objective, it is more likely that this generates meaningful market impact by disappointing. Furthermore, I am keeping a weary eye on the EU-US relationship as the former awaits the WTO ruling on Boeing and US is supposedly preparing escalation after the December finding that Airbus subsidies had no been fully halted.

Chart of USDCNH with USDHKD (Weekly) 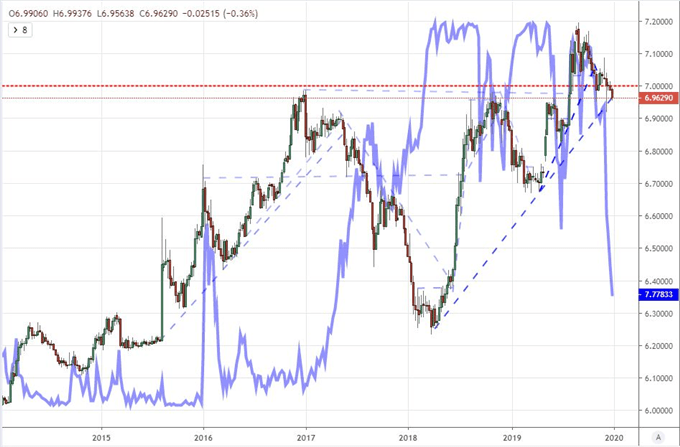 A more measurable risk ahead will be the concern surrounding global economic health - namely recession risks. The run of monthly PMIs this past week was generally overlooked as 'final' figures even though the tenor of the data was worthy of doubt with many of the regional figures set to contraction (below 50). That convenient ignorance faltered Friday when the ISM's US manufacturing activity report unexpectedly slipped further into 'contractionary' territory (a reading below 50). There is a general recession in global factory and auto industries, so this doesn't come as a sudden shock, but it is particularly worrying given the optimism that rose for the world's largest economy given perceived improvements in trade and the confidence built into the Fed's responsiveness. There are a host of economy-interpretable indicators due over the coming week, but the ISM's service sector reading is particularly important given the attention afforded to Friday's factor report. 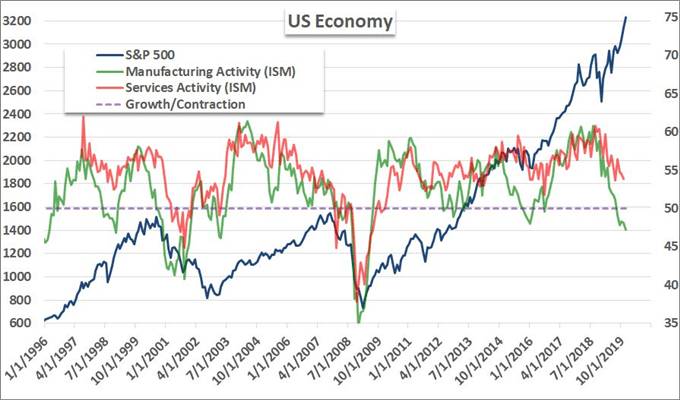 In fundamentals, there is a hierarchy of importance that needs to be distinguished in order to understand what is - or will - move the market. Risk trends are always the overriding theme, but they are not always actively shifting towards panic or greed. The motivators of this elemental state are the systemic matters in thematic trade wars, growth and monetary policy referenced before. Absent a full charge in those critical catalysts, more attention will be afforded to specific event risk - though its true trend potential will still be limited. Top event next week - aside from the ISM services report - will be the December nonfarm payrolls (NFPs). The US jobs report is more capable of stirring volatility owing to its recognition, but even a tentative downshift in the quality of the overall report can raise concerns of the peak and subsequent turn in a critical backbone of complacent optimism. 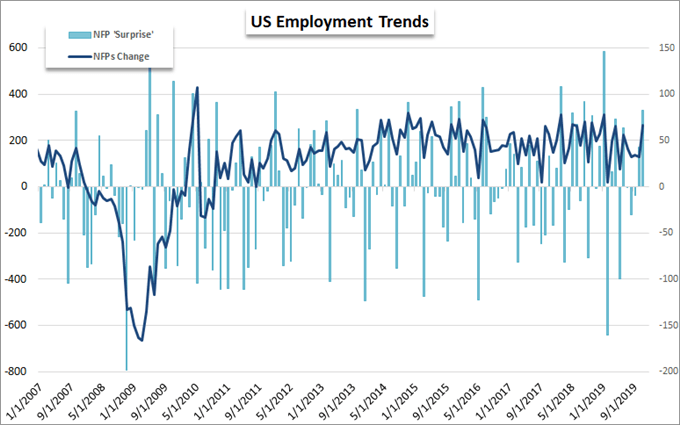 Outside of the Dollar's sphere, the Canadian employment report is well known for generating at least short-term volatility for the Canadian Dollar. That is a Friday report (as is the US counterpart) so the potential in follow through may be cut off by the weekend liquidity drain. Canadian manufacturing and trade figures are due earlier in the week and can generate their own activity earlier in the week. Global PMI and trade figures will present prominently across the global calendar in the week ahead. If concern is still heightened through the period, there will be a greater sensitivity to disappointing figures. If there is a collective easing of this run of data, it could even tip a global risk aversion without a geopolitical spark. 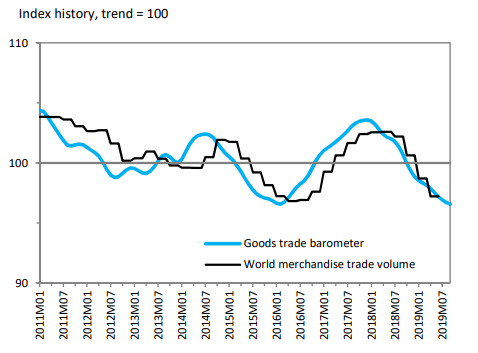