In terms of scheduled event risk this past session, there were two key events cued up of critical importance: the European Central Bank (ECB) rate decision and UK general election. Thankfully for newly minted Chairman Lagarde, the market's focus was not on her first turn at hosting the central bank's policy meeting. Had the market had nothing to distract it and encourage deeper scrutiny to some of the less stable elements to economic growth, we could have turned to the fading effectiveness of the ECB's extreme efforts and the growing dissension in the ranks of the central bank to the liberal use of extreme accommodation. Instead, the Euro would end up borrowing its volatility spark from a theme more often attributed to the British Pound. 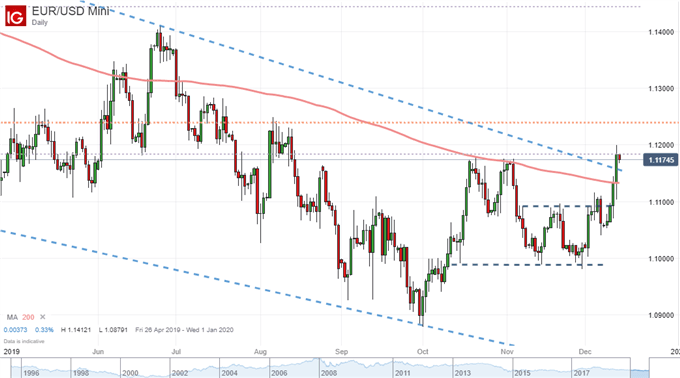 The UK election is certainly important for many reasons; but for the global markets, its relevance is as a critical milestone in laborious uncertainty of the UK's divorce from the European Union. After more than three years of uncertainty, the simple lack of a clear path forward has translated into painful economic and financial fallout. With the risk of a hung Parliament that could leave the government with no clear mandate to negotiate on firm footing with the EU, the markets were watching closely. After some remarkable, intraday volatility in the blackout while polls were open, the shot higher from the Sterling after the initial exit polls were reported signaled to the market that the opposite scenario seemed at hand. Suggestion that Conservatives were on pace for a commanding 368 seat majority seemed to offer the clearest possible path for what the next stage of Brexit negotiations would look like. This is not a sign of preference for a divorce over the UK remaining in the EU, but it is relief from the murky future. Now, the next steps are in clarifying whether a Withdrawal Agreement can be signed off before the January 31st deadline. After that, comes the real work of making it happen. 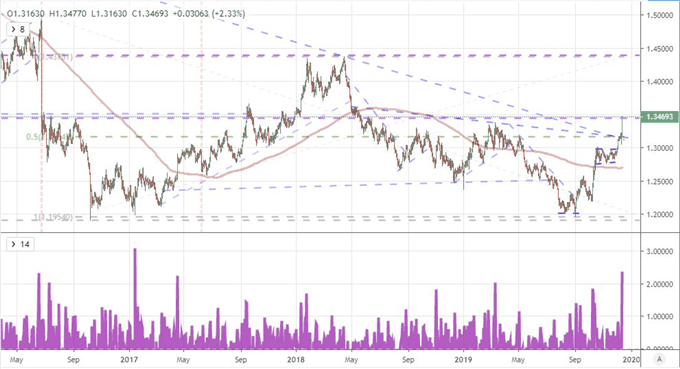 USDCNH Drops Below 7.00 and Its 200-Day Moving Average on Reports of Trade Break Through

While the UK election was the top scheduled event for the day, the most market-moving overall for its scope was the semi-unexpected news that US and Chinese negotiators had reached an agreement in principal on the Phase 1 deal that they could reasonably sign. It is ironic that the same language was used when the opening stage to de-escalate was initially reported, but this time it seems that there may be legitimate traction. Though the details were not made public by the time I recorded, it was suggested that the US was offering to cut the tariff rate on the nearly $360 billion in Chinese products that it had slapped tariffs on and China was in turn agreeing to purchase a supposed $50 billion in agricultural goods. This is encouraging but the real news is that the December 15th deadline that was hanging over the market's head was supposedly delayed (not totally removed). This news was good for a USDCNH drop below 7.0000 and subsequently the 200-day moving average. 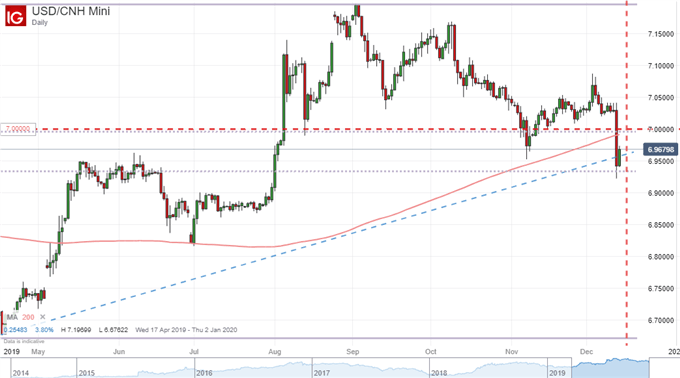 Here too, there are layers to this situation. This is not a full turn on trade wars back to the 'free trade' environment two years ago. Nor does this address the crux of questionable trade practices held against China by the Western World. Here again, we will assess the market's level of readiness. Are we looking for relief as a cue for a risk appetite rally lying in wait or is there deeper appreciation for the complication of returning to more productive growth. At its root, this is still a situation whereby we are trying to remove a growing pain rather than spur untapped expansion. 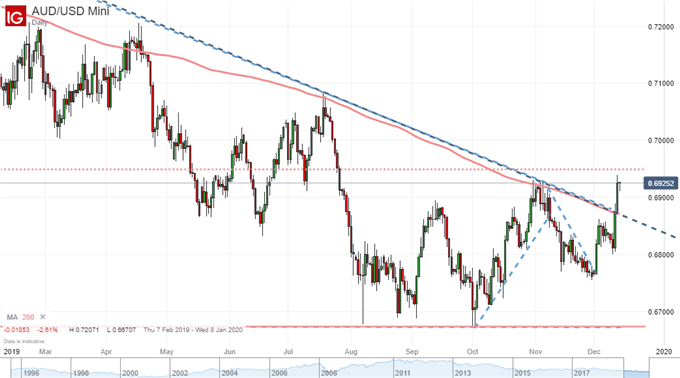 While there are assets that are directly related to the top fundamental developments of the past session, the hurdle moving forward isn't clearing a blockage for these key assets. Rather, the high-water mark is general risk appetite and its effort to overcome liquidity restrictions. Theoretically, easing trade wars and the risk of European instability should provide the kind of reassurance for a low boundary speculative appetite market to charge a rally. A rally on Friday with this cumulative development is a high probability. However, the true measure of conviction will be the bearing and momentum across risk assets into the new trading week. Between data, prevailing trends, systemic complacency and seasonal lift; slow lift would be assumed while a retreat would be very troubling. 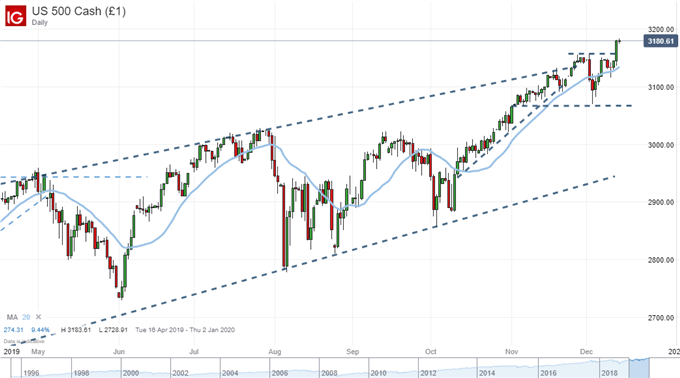 Another aspect of the risk response to these recent developments is the performance of the outperforming risk assets relative to the trailing assets. The S&P 500 - as a symbol of US indices - is the best performing of the traditional risk assets that I refer to going back to the start of the recovery post-Great Financial Crisis. That means there is little unaccounted-for discount in this asset class. In contrast, global equities (VEU), emerging market assets (EEM) and carry trade (USDJPY) among other benchmarks are trading a clear discount to US shares. If there is a genuine speculative swell, it would more likely see the discrepancy reduced. A continued outperformance by US indices would suggest the same perversion for exiting momentum rather than traditional value - a less sustainable model of 'risk appetite' and one that blows bubbles. 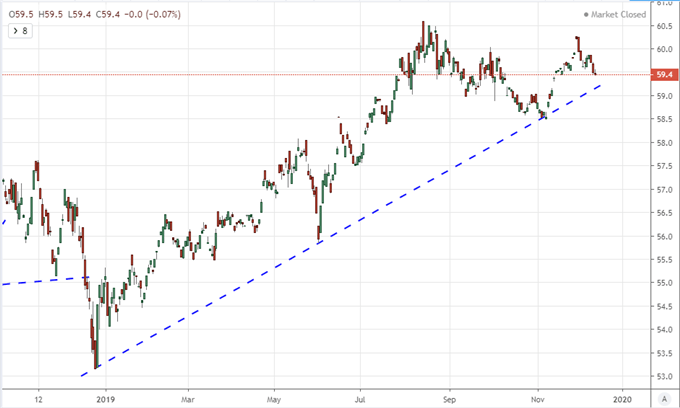 A Word to the Dollar as Its Benchmark Counterparts Rally

While the Yuan, Pound and S&P 500 are the stars of the present fundamental mix, a word should be spared on the US Dollar. With the Brexit situation improving, the Euro and Pound are in a position to benefit. As trade wars seem to thaw, the Australian Dollar and Yuan are supported. With the exception of the Japanese Yen (a haven or funding currency), those are four of the most liquid reserve counterparts to the Greenback. Therefore, the USD is the most put-upon currency by the elimination of options. Indeed, the DXY dollar index has made a bid to break a long-standing channel support. Here, too follow through matters, but it would be easier to sustain the FX moves to rebalance than extend an already stretched risk appetite run. 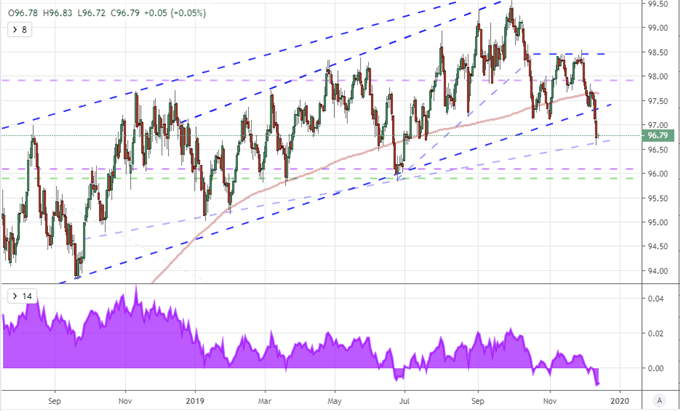 The exception to the Dollar rule is the USDJPY. This is a pairing of two haven currencies with a carry favor for the Dollar. If external risks are easing, the pressure for further rate cuts from the Fed should theoretically ease. Is this benchmark currency more valuable as a carry trade, a relative growth opportunity or safe haven? The performance of this pair will weigh in on that consideration. 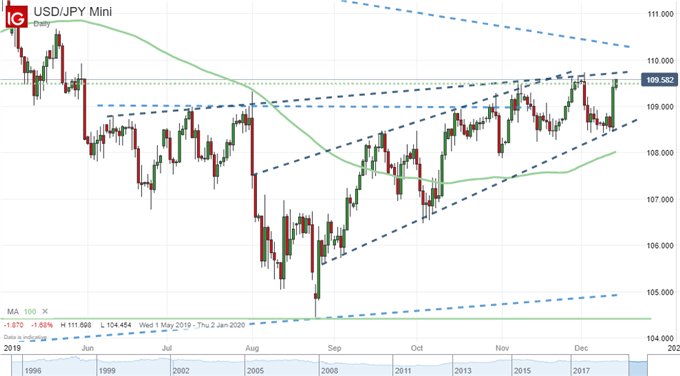