Dollar or Dow: Which Faces the Biggest Impact from the Fed Decision, Forecasts?

Are you watching the FOMC rate decision? Join me as I cover the event and its market implications live starting 15 minutes before the scheduled announcement.

As We Head Into the Fundamental Gauntlet, Remember: Market Conditions First

We are about to enter the 'active' portion of the trading week. This is not to say that volatility is guaranteed, but we will transition from anticipation of high-profile market-moving events into the actual update and response. It is easy to get caught up in the bombastic headlines and even initial volatility when the fundamentals start to land, interpolating a seismic shift in underlying market conditions - much less individual assets - that simply don't meet the practicality of liquidity or conviction. There are recent examples where December has proven particularly volatile, but it is not an easy seasonal norm to overcome. Liquidity naturally drains through these final weeks through habitual conditioning and the restraint through much of 2019 will act to reinforce this assumption. That said, a reduction in participation does not ensure that nothing unexpected could befall the markets. A systemic event (expected or not) can occur out of the blue, turning thin liquidity into a disorderly exit among the trading masses. Though a small probability, the scale of risk should keep us vigilant. 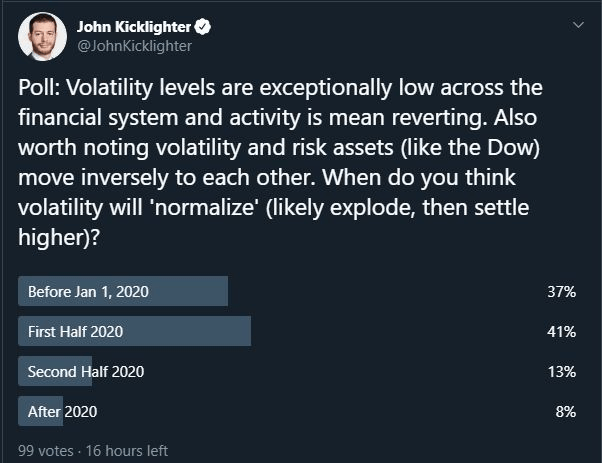 If we were to look to a benchmark like the S&P 500 as a means of gauging the market's concern or preparedness, it would seem that the speculative market as a whole is a sitting duck. The past two days have seen the US benchmark index float lazily just below record highs, a benchmark for global financial markets and speculative interests in general. However, there is evidence of concern starting to show through. The VIX volatility index, which maintains an extreme net speculative short futures position, has swelled this week and maintains a level far more loaded than what we experienced throughout November. The VVIX volatility of volatility reading has steadily risen as well, but the real concern has developed through the SKEW tail risk measure. A so-called 'grey swan' measure, the indicator rose to its highest level since October 4th, 2018 this week. While there have been a number of instances that this measure has held up an existing level of buoyancy, to see it charge higher in December from a dead stop is particularly unusual. Be wary. 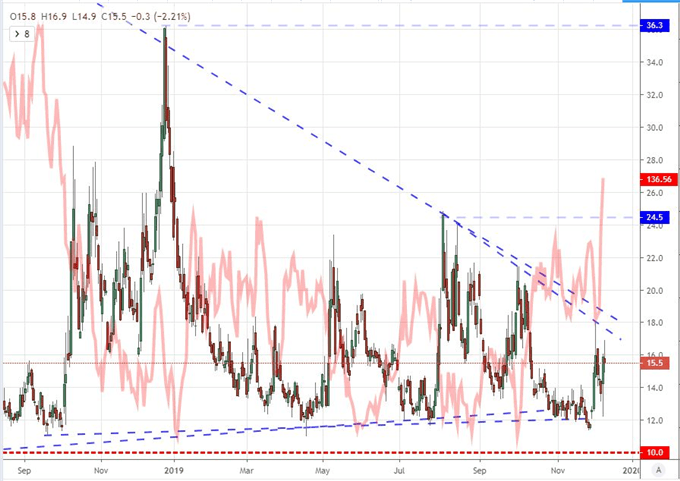 Thus far into the trading week, we have been in a state of anticipation. The quiet we've experienced is not a true disengagement from the risks that are circulating through the system. There is certainly an element of 'wait and see' dictated by the key events scheduled through the second half of the week. The first of those high-level milestones comes later today in the afternoon of the US session. The FOMC (Federal Open Market Committee) rate decision has become a particularly important event to watch after three consecutive 25bp rate cuts from the policy authority. The market is fairly certain that a fourth cut is not in the cards Wednesday, but the Fed itself was certain that no cuts were coming before each of these reductions. 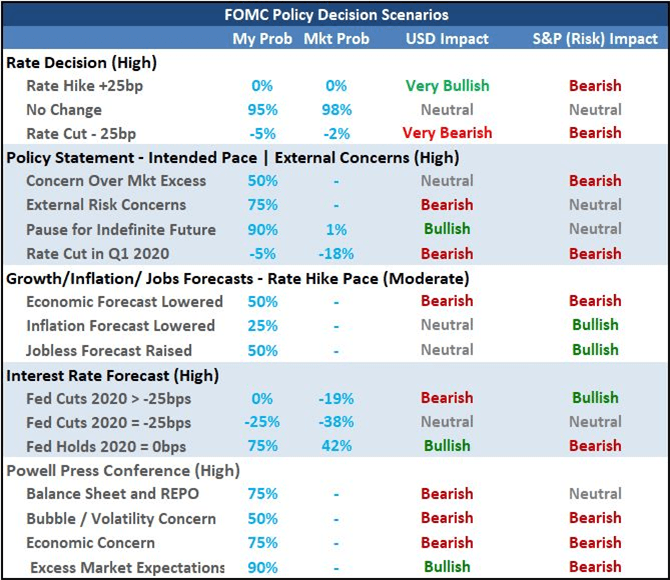 Even if the US central bank holds rates does not mean that this suddenly becomes a nonevent. There are number of aspects to this gathering that are particularly important to the speculative forecast for US and global markets. While the nuance of the monetary policy statement is important, there is a far more direct view of the body's outlook via the Summary of Economic Projections (SEP) that they update every other meeting - in other words, every quarter. The growth, inflation and employment forecasts are of obvious importance; but as always, the market will place the greatest value in the collective forecast for interest rates. They projected no change through 2020 and an eventual return to rate hikes in subsequent years. If that changes, it will not go unmarked by those speculating on the Greenback or local assets. 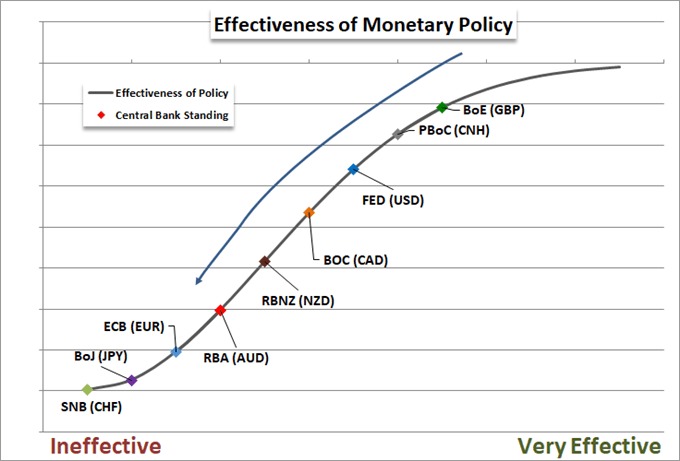 Further, there is considerable risk to be drawn from the press conference with Fed Chairman Jerome Powell half an hour after the announcement on rates and forecasts are released. Should he dive into the central bank's strategy with reference to a sea change - or even inference of fading effectiveness - the market is likely to tune in immediately. I will also be looking into the question and answer time for reference to capital market reach, financial volatility, external pressures and most importantly the repo situation. The Fed has sharply increased its balance sheet for reasons that it says are not related to traditional QE. That may be true, but the need to backfill overnight liquidity is even more worrying. While not a fire starter in itself, the speculative amplification it creates can readily escalate uncertainty into a financial crisis. 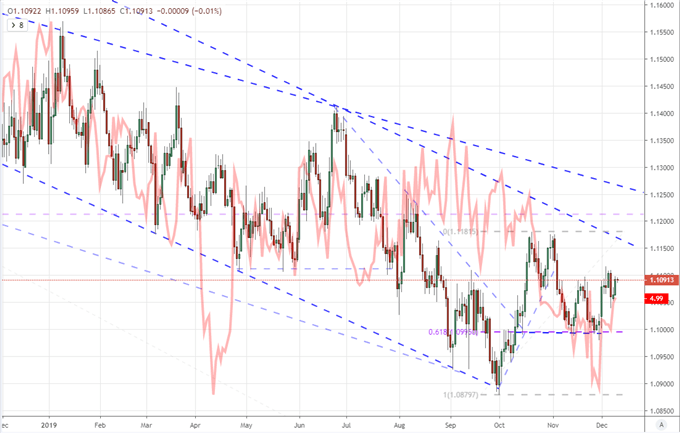 'Other' Fundamental Themes That Will Soon Exert Much Greater Influence

Outside the immediate gravity of the US central bank decision, we are due a host of additional monetary policy updates over the next 48 hours. Generally, the larger groups are expected to hold steady while the emerging market players are facing a higher probability of further cuts. The European Central Bank's (ECB) on Thursday is likely to fit the mold, but its steadfast course bearing of a negative discount rate and stimulus expansion is not exactly reassuring.

In contrast to the convenient timing - but inconsistent market influence - of the monetary policy events ahead, the trade war headlines remain an ominous influence to account for. The December 15 deadline for a US-China compromise to be found is hanging over heavily over the market. Either the two countries come to an agreement to ward off the onerous economic restriction or we are facing a severe escalation to one of the few threats to economic prosperity and financial stability that have actually penetrated steadfast risk trends. The potential between now and the weekend still skews towards a AUDUSD bullish or USDCNH bearish swell, but beware the risk if we head into the weekend without resolution. Meanwhile, the US-China standoff is far from the only contentious trade war front. The USMCA was reportedly pushed through verbally among parties this past session, but neither USDCAD nor USDMXN were stirred to life on the reports. The recognition and adjustment to the US-EU pressure (Airbus subsidy retaliation, French digital tax and response to that bill) is even further down on the totem, but it would be dangerous to overlook the risk.

A fundamental theme short-circuited by recent prioritization is the run of growth-oriented data listed this past session. Chinese lending jumped to 1.39 billion yuan with is pushing the line of pre-emptive support for foreign investors or sustained drop in Japanese machine tool orders sets the tone. With further figures taping European and US economic health, there was a clear miss for impact on this systemic level. Alternatively, the Pound has effectively found a fundamental spark of its own. Though the critical deadline is still ahead on Thursday with the UK General Election, the market is still sensitive to speculation in the lead up. Reports that opinion polls saw a drop in the Conservative lead and Labour short fall led to an sharp Sterling retreat this past session. The market didn't run with the news, but it nevertheless shows the importance of what lies ahead. 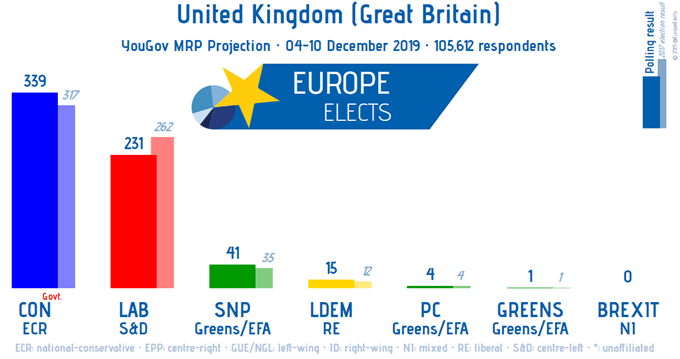