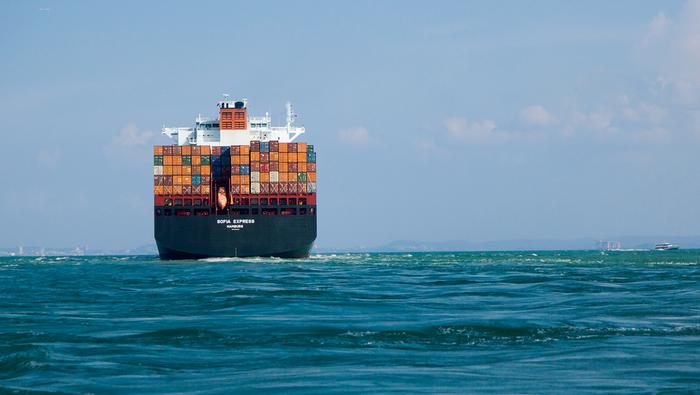 A Sudden Change in Liquidity and Volatility...But Here to Stay?

Coming out of the holiday trading conditions that froze markets through the end of this past week, market participants were wary of what kind of environment we were navigating into. Pushing back against the systemic moderation these past weeks and months, Monday delivered a shock of volatility. This was best registered - at least for me - in the drop from the S&P 500. Technically speaking it was the worst single-day showing since October 8th. More qualitatively, the index dropped back below its remarkably persistent 10-day moving average and the floor of an impressive advancing 7-week old channel. In turn, the SPX-based VIX volatility index charged higher. That will certainly cause some indigestion for the record net short futures exposure speculators took through last week. 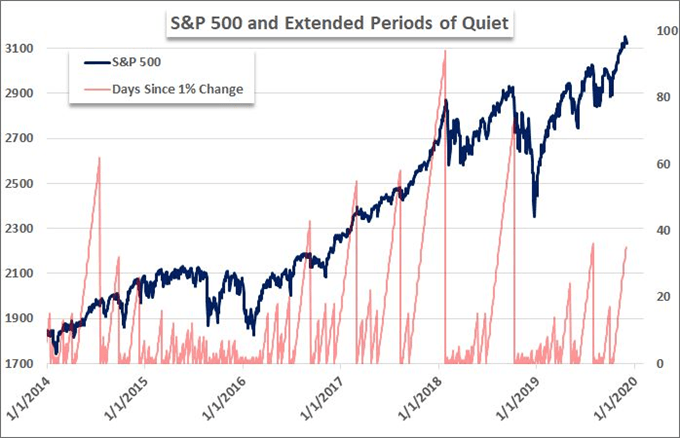 More remarkable a measure for the potential from Monday's move was the breadth of the risk aversion it insinuates. While the US indices were marking the most impressive technical progress, global shares were following suit. The rest of world VEU ETF was sliding, but it didn't make a critical break - not surprising as it wasn't perched just off record highs. Meanwhile, the EEM emerging market ETF was flirting with a six-week low, the HYG junk bond index was pressuring its 2019 trendline support, USDJPY was representing a slide in carry trade and other related measures were showing the pressure. We are very early in the transition to insinuate a trend, but the movement definitely has traders’ attention. 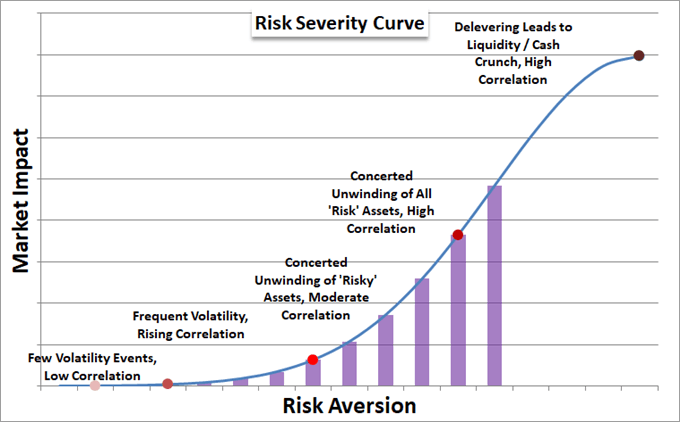 Gauging intent for follow through is the principal concern at this point. That requires both liquidity and likely a fundamental 'north star' to guide as many market participants as possible to the same motivation. Liquidity will be difficult to muster. While we have weeks of regular market conditions ahead, we are on the backend of a systemic slide in turnover and December is one of the most pre-determined months of the year. Recognition of sudden changes in tempo these past two years may keep markets on the defensive however. Further, a significant development from a pre-determined critical theme could also help overcome speculative complacency. On that front, there is plenty for which we need to keep track.

I believe the markets were ready to make a move when the week opened, but it is always more effective if there is a rung of motivation for the masses to grab onto if the assumption is that we were attempting to establish some lasting trend. There was numerous headlines that hit on two familiar themes in particular: trade wars and growth concerns. As for the former, there was rhetoric around the contentious US-China negotiations as the US Commerce Secretary warned a December 15th tariff escalation was a still an option for Trump and China warned an 'unreliable entity list' was ready for release. The serious headlines were out of this normal scuffle though, starting with US President's tweet announcing metal tariffs on Brazil and Argentina. These are large economies but this is not the systemic move that will destabilize global functioning. 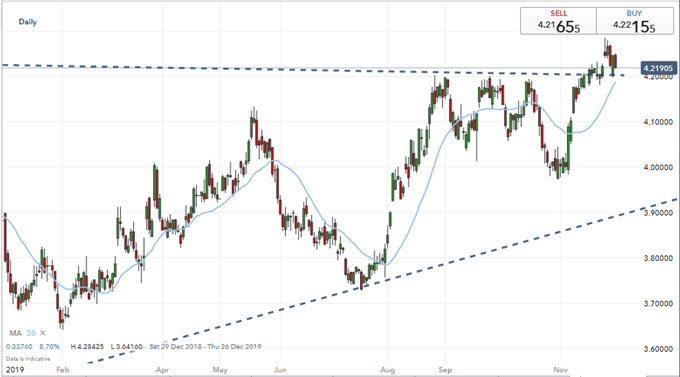 Another trade war front of interest - though not systemic in influence - were the remarks from US Senator Grassley who said a USMCA deal needs to be put to Congress if it has any hope of going into effect this year. USDCAD and USDMXN are paying attention. The truly remarkable news though came in the very late hours of Monday's session. The US Trade Representative's office announced after review that it would take action to retaliate against France's digital tax, which hit a number of large US companies. Their response was tariffs to the tune of $2.4 billion in French imports - some products facing a 100 percent import tax. Alongside the WTO's rejection today of the EU's attempt to halt the United States pursuing its over $7 billion in damages for unfair subsidies to Airbus, it seems the two largest economies are moving closer to a 'hot' trade war. 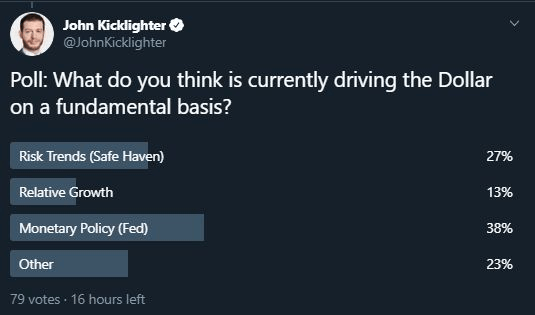 The other fundamental theme for sentiment influence this past session was the outlook for economic activity. The seemingly unflappable confidence that growth will always find a way was shaken Monday. On the positive side, there was China's Ciaxin manufacturing report which rose to 51.8 against an expected slip to 51.3. Japan reported a 7.1 percent jump in capital spending but a 5.3 percent drop in corporate profit. Reports of a possible massive 25 trillion yen government stimulus did seem to draw serious attention. In the US, Black Friday sales jumped 5.4 percent over the previous year, but the ISM's manufacturing activity report slipped further into contractionary territory - warning that there is serious risk to that decade-long boom. 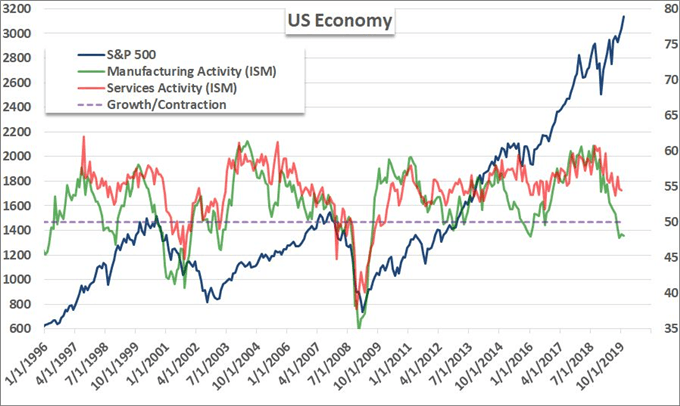 Serious Surprises for Activity for Australian, Canadian and New Zealand Dollars Along with Gold

As we watch the global ship take its slow turn, there are more isolated eddies of volatility showing up around the market. The Australian Dollar managed a noteworthy advance despite the disappointing showing from the AiG manufacturing report and corporate profit. The anticipation for the subsequent RBA rate decision and Australian 3Q GDP update were no doubt keeping the market anchored. The bigger move Monday was the Canadian Dollar's slide. On an equally-weighted basis, the currency fell to its lowest level in five months. A rise in Canadian manufacturing activity didn't see the cue there. The most dramatic move was from the New Zealand Dollar. It's rally was the biggest in 10 months and a rise from a long-term basing pattern. It looks appealing technically, but a fundamental charge would be best served. 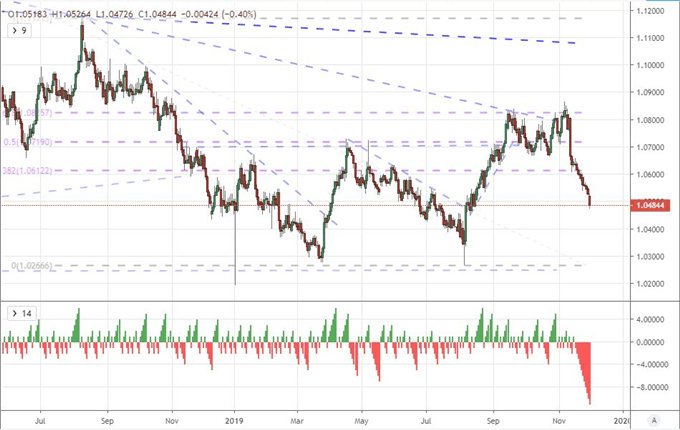 In contrast to the surprise volatility of the 'comm bloc' currencies, gold managed to offer almost no action whatsoever. The commodities lack of movement is even more incredible given its more habitual level of activity these past months and the alignment of so many critical themes. The risk aversion on the day could have catered to the haven appeal of the metal. It didn't. The Dollar's dive is a pricing adjustment not just for major FX counterparts, but the usual lever didn't even register. Not even questions over financial stability stirred by further lament by Trump over the level of the Dollar seemed to worry. Is this a new market for gold or a passing distraction? 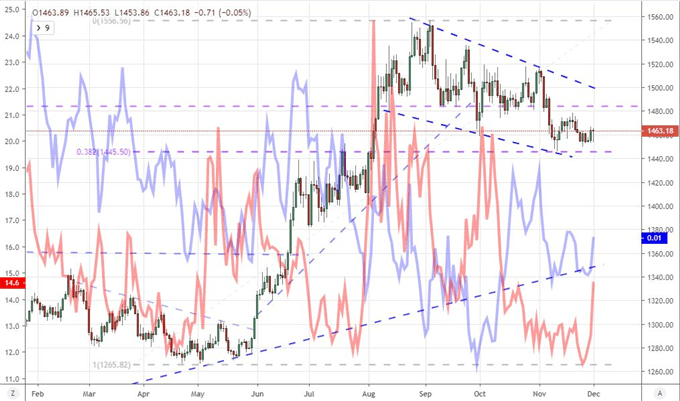