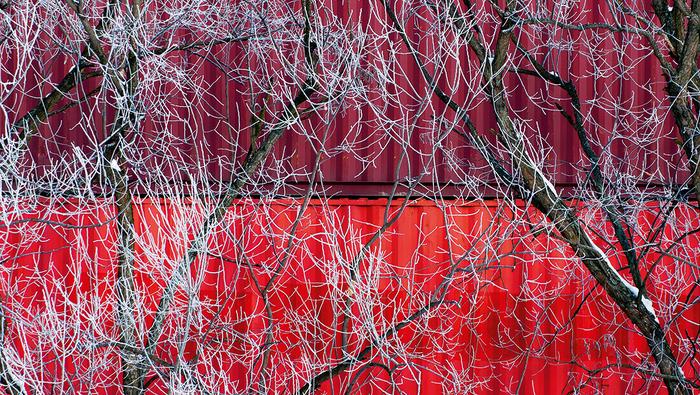 S&P 500 Slip Isn't Yet Bearish Conviction, Even with Trade War and Recession Headlines

When you are crawling through the desert and dying from thirst, any sign of moisture will seem a life-saving wellspring. And though we are not exactly facing a total drought in volatility in the financial markets, the trading masses are certainly prone to mirages given 2019's environment. This past session, the S&P 500 led risk-leaning assets on another very controlled slide. The easing was apparent across all regions and all asset types - as was the notable lack of pace. Considering the technical picture for this benchmark, there is just enough there to lead bears out of their cave. Thursday's 0.2 percent decline secured the first three-day slide since September 24th (before that, a six-day slide traversed the 2019 channel on August 5th). Yet, despite the technical drop, we are still holding above the short-term, 10-day moving average and the session fit neatly into Wednesday's more significant trading range. I will be waiting for more significant milestones to give before putting my conviction into action. 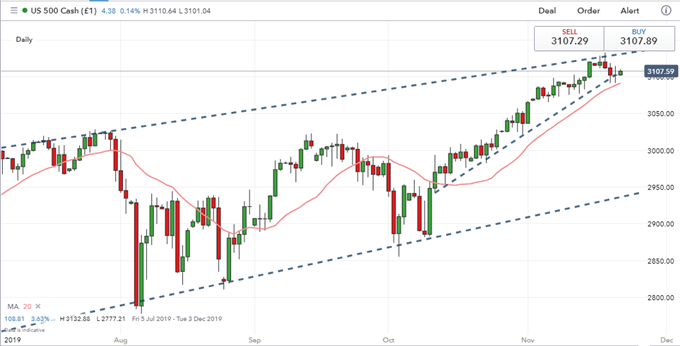 It is no small feat at this point to overcome the inertia that has resulted from a deep sense of complacency that defines our present financial environment. While there is is breadth of a technical risk turn, there is no commitment to the downdraft. Nowhere is this more apparent than with the so-called 'fear index' - the VIX - which has held to a strict range between 14 and 12. This is not exactly the same extreme that we plunged back in the second half of 2017, whereby the measure dipped below 10 more than 50 days (unheard of), but we are still facing extreme aloofness. A different measure of the environment of compression is the 20-day (1-month) historical range on the volatility measure which is the smallest in nearly six years. Then, of course, we have the largest net short speculative position on the VIX futures on record as of last week. There is no arguing the exceptional degree of quiet, but there is plenty of debate raging as to when we actually hit the inevitable tipping point. 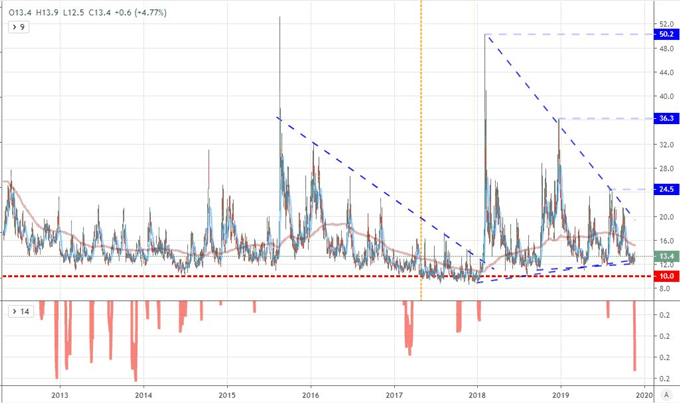 While there were a few fundamental highlights this past session, it was fairly clear that the market's focus was on more uncharted matters. Once again, the market's center of attention was development in the ongoing trade war. Following the reports earlier in the week that the US and China may not reach a deal before the year ends, which would in turn raise the chances that Chinese government defaults to a wait-and-see policy looking to capitalize on political upheaval in the US. That said, Chinese Vice Premier Liu He announced he had invited US negotiators to China to continue talks. That is particularly remarkable considering news in parallel that the Senate then President signed a bill supporting Hong Kong's pressure against Chinese pressure. Keep mind of USDCNH - a strong move one way or the other would hold serious implications for a key risk driver.

Moving forward, there is serious risk in the US-China trade scuffle, particularly when we get to the still-planned escalation on tariffs December 15 by the former on the later. That said, my greater concern in my estimation is the possible recognition by global investors that the United States has shifted its concentrated attention from China onto a more global reach. In particular, the pressure on the European economy is of chief concern. According to reports from Politico this past session, the White House was considering a Section 301 against Europe that would replace the potential expiration of the Section 232. As a reminder, that latter pressure was pushed by US President Trump who was due to decide on the recommendations of the Commerce Department on its findings around whether imported autos (and parts) were a trade national security threat. Relief from this louder drum is one thing but reports that a broader evaluation of the site and economy that follows an effort to pressure Europe to capitulate makes purpose natural. The White House didn't seem to be any hurry to resolve speculation.

While trade war headlines carry an inordinate amount of potential for market movement this past session and through the end of this week, scheduled data seems to point to another theme altogether: global growth. This past session, there were a few updates that tapped into this consideration including the United States pushing a gap funding to avoid a last minute government shutdown (that used to be a principal focal point) and the WTO stating that trade war measures in the G20 in the six months through October had accounted for another $480 billion throttling of GDP. The most comprehensive update, however, was the OECD's updated forecasts. According to the group, the global economy is due to grow 2.9 percent this year and next, the 2020 forecast representing a 0.1 percent downgrade. An uptick in 2021 to 3.0 percent would come only with an addressing of trade and China's slide which is a considerable assumption. 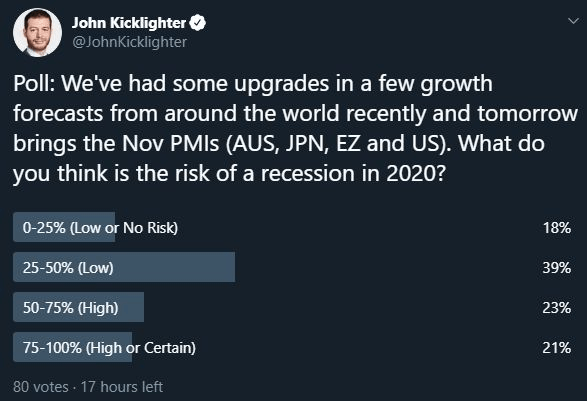 Through the end of the trading week, we are wading through a wave of scheduled event risk that will represent a tangible update on activity rather than just an open warning. The PMIs (Purchasing Manager Index) from Markit are a good proxy as a timely GDP reading. As it happens, we are due November figures for the key representatives of the developed world. We have already seen the Australian figures whereby the composite slipped into negative territory and Japan's report which stagnated. Ahead, we are due the Eurozone, United Kingdom and United States figures. Some may be looking to these data points as localized catalysts for their respective currencies; but drawing away from overbearing matters like Brexit, risk trends and US uncertainty is a difficult hill to climb. The greatest potential from this round is to see a comprehensive reading to stir a growth-to-risk connection. That said, it is far more likely that a uniform disappointment triggers broad risk aversion rather than a spark of confidence from moderately better readings barely in growth territory.