Keep Sight of the Troubled Environment Rather Than the Ultimate Catalyst

Once again, we opened to a trading week that was punctuated with speculative reach that is light on genuine enthusiasm. The top-line of speculative performance holds with the US indices. Though there wasn't a robust charge higher from the S&P 500, it was still a bullish close over the session. In fact, this benchmark has posted seven consecutive sessions whereby the markets have gained when measured from the trading days open to close - meaning most of the bearish pressure over that period has come overnight and cemented in bearish gaps. The fact that we are inching higher into fresh record highs certainly helps to compensate for that lack of pacing. Looking further afield, that otherwise restrained pace for the likes of the S&P 500 and Dow was notably absent for the global spectrum of risk assets. Global indices/shares, emerging markets, carry trade and other alternative risk representatives were spinning their wheels. That contrast was a noteworthy shift relative to the systemic bid registered on Friday. When correlation drops, it is indicative of a weakened influence of sentiment. 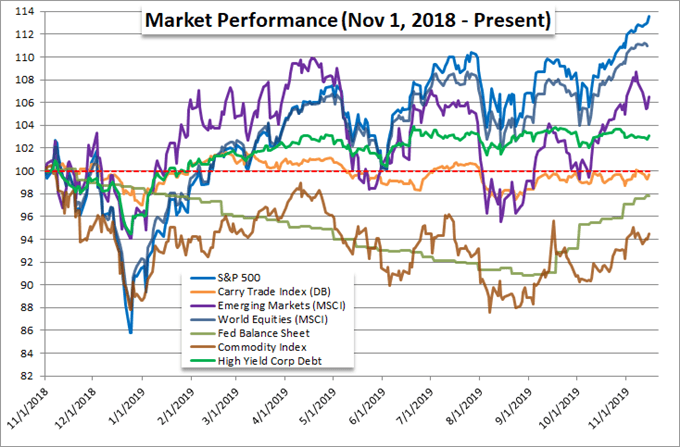 As traders watch for cues like the Dow to take the first stabs at a technical reversal or a headline to serve as the fundamental trigger to a wholesale reversal in conviction, I think that it is more important to monitor the erosion of market conditions that will shape the investment horizon rather than attempt to call the ultimate catalyst to an inevitable tide change. The spark to market-wide reversals the past decades are different but the backdrop that ushers these dramatic changes are generally the same. It is an excess of exposure to risk via thematic leverage and the lowering of value standards. Few measures of risk are as stretched as VIX - the 'fear index' whose hedge purposes are far more critical at this stage. With a strong inverse correlation to the underlying S&P 500, we have surpassed the point whereby further advance for the index could earn a commensurate drop in the volatility measure. Can we return to the extremes of second half 2017? Speculative futures positioning seems to reflect that outcome.

This week's top scheduled event risk pales is decidedly less prominent than what we've absorbed these past weeks, but that doesn't mean we are without sparks to charge volatility. I didn't expect monetary policy to be a principal theme Monday, but an unexpected meeting between US President Donald Trump, Fed Chairman Jerome Powell and Treasury Secretary Steve Mnuchin struck that cord. Though the President suggested the meeting was cordial, reports that he referenced negative rates rang familiar given the strong critique he has maintained against the central bank. Further indication that he quizzed his policy leaders on the detrimental impact of a strong Dollar on manufacturing and trade suggests he is considering this a possible point of compensation for the trade war the administration loathes backing down from. A currency war seems like a distant risk, particularly for a market defined by its complacency, but don't write off the risk. 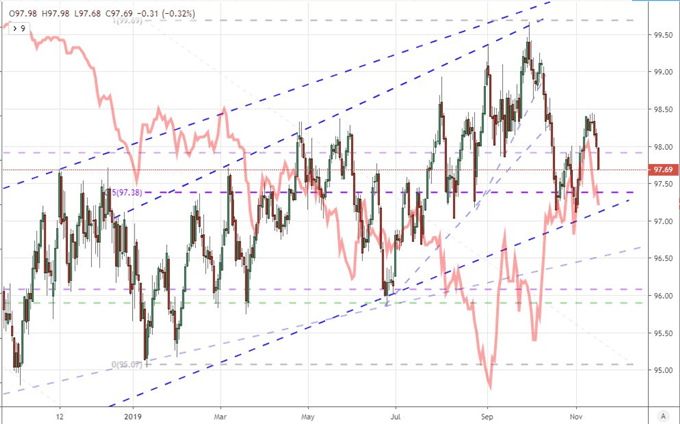 Though the central bank is unlikely to bend to the pressure that Trump is bringing given so many examples whereby they have rebuffed the pressure, the market attributed a higher probability of further rate cuts over the coming year. The probability of additional moves by end of 2020 climbed after the day's news. Strategically-speaking, if the President decided to keep pressure on trade wars, the detrimental impact for the local and global economy could very well force the policy group's hand. Yet, the broader concern should remain the competitive element of monetary policy globally which could hasten the deterioration of effectiveness in monetary which is already under heavy scrutiny through the Euro-area, Japan and other regions where the effort has surpassed its practical return. 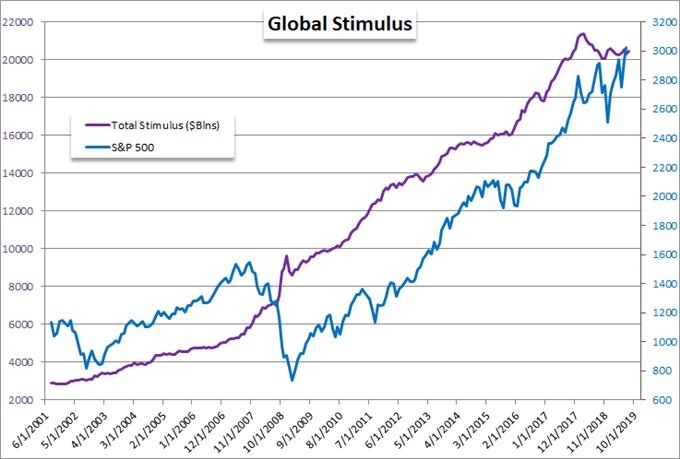 In contrast to monetary policy headlines, there was some measure of anticipation for trade wars. A report from CNBC suggesting China's mood on negotiations was 'pessimistic' on finding a compromise with the United States after Trump said last week that no agreement on a rollback of tariffs had been decided. The seems to directly contradict the enthusiastic headlines trumpeted the week before. There are suggestions that China is increasingly considering its position with the US election cycles and the pressure from the impeachment investigation. That doesn't exactly surprise, but China isn't in the free and clear. The economic pain is stacking up for their economy and the world. The WTO's leading trade indicator projected the worst year for this critical source of growth since 2009 with a 2Q growth of 0.2 percent - a severe slowdown from the 3.5 percent clip through the same quarter year previous (just before the trade wars gained serious purchase). And, of course, you cannot forget that the Trump Administration still hasn't addressed auto tariffs after the suppose Thursday deadline came and went while the EU continues to weigh out response to the United States ancillary tariffs on agricultural tariffs. 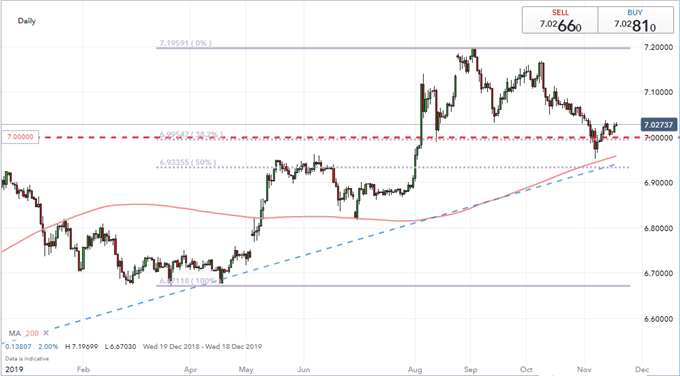 For its part, growth was the only high-level theme that had tangible event risk on tap through this past session. China was tending to its short-term financing, with the first cut to the 7-day reverse repo rate (2.55 to 2.50 percent) in a long time. This may not seem to be a traditional growth issue, but it is where financial health meets economic stability. Europe's economic update was a more direct concern. The Bundesbank (Germany's central bank) updated its economic report with a warning that the "slowdown...will probably continue in the fourth quarter" which undermines the weak optimism that may have been found through the avoidance of a technical recession last week. The only moderate bright spot seems to be a burgeoning enthusiasm for US growth into 2020. A few highlights include Goldman Sachs' bullish view on equities based on an expected upside surprise for the country's growth and Fannie Mae's upgraded forecast (1.7 to 1.9 percent) which was very prominently based on an improved trade war situation. That is a lot to expect. 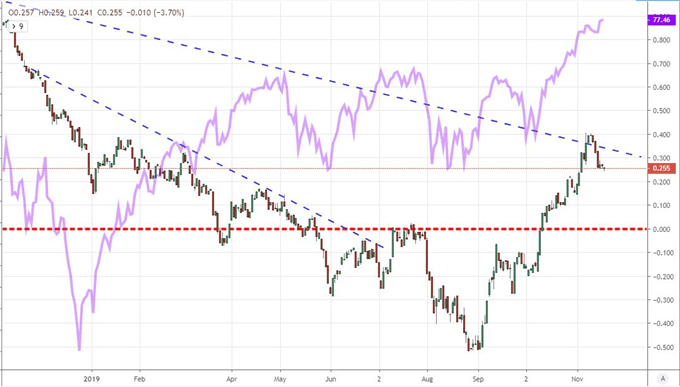