It is easy to overlook the risk inherent in complacency - especially when it is coupled with a sedative like record highs as the US indices are pushing. Extreme activity naturally draws attention with an expectation that high volatility will generate further extensive movement - whether the presumption is follow through or reversal. Yet, I would argue that the greater potential and danger is in activity at the opposite end of the spectrum. Extreme quiet encourages market participants to lower their guard and leverage their exposure to compensate, exactly when there is the most to lose. Whether too erratic or too quiet, there is a natural reversion that can cause upend the market as they shift into a different gear. While many are referring to the VIX scraping along exceptionally deflated levels, I find the 'realized' (rather than implied) throttling of the underlying S&P 500 more remarkable. Another restrained day through Thursday notched a ninth session of tire spinning. This is the most reserved stretch of movement from this benchmark since January 2nd, 2018. These are not holiday conditions nor are they comparable to the period that preceded holiday 2017 where none of the present systemic themes was present. 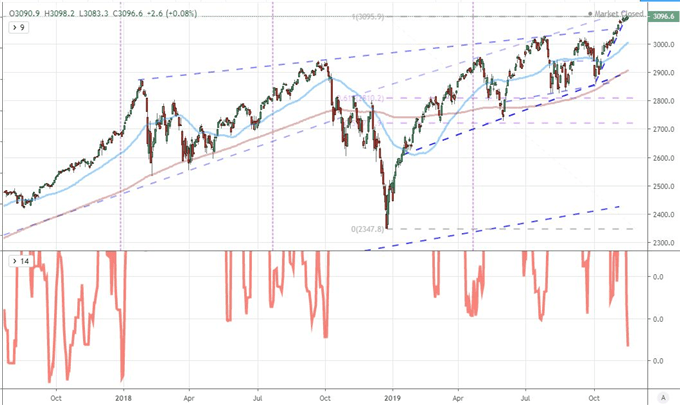 We can continue to push risk benchmarks 'a little further', but there is no going it alone for individual asset classes like the US indices of the balance of capital starts to reverse course. If speculative appetite retreats more comprehensively across the broader financial system, the Dow and S&P 500 will lose their traction. There is already pressure on this front, but it is still early and not yet fully committed to the unwind. The divergence between the Dow and EEM emerging market ETF this past week remains extremely negative through the week. I choose the EEM because the overriding winds buffeting the system exert greater pressure on this representative segment of the global economy that nearly everywhere else. Extremely accommodative policy pushes capital to the higher risk areas, growth is necessary to keep these funds allocated and trade wars represents a far greater risk to these producer economies. In general though, we find many other risk-associated assets - carry trade, junk bonds, Treasury yields, rest of world equities are much in the same boat in supporting the contrast. If this juxtaposition holds for much longer, it is very likely that the US indices capitulate. 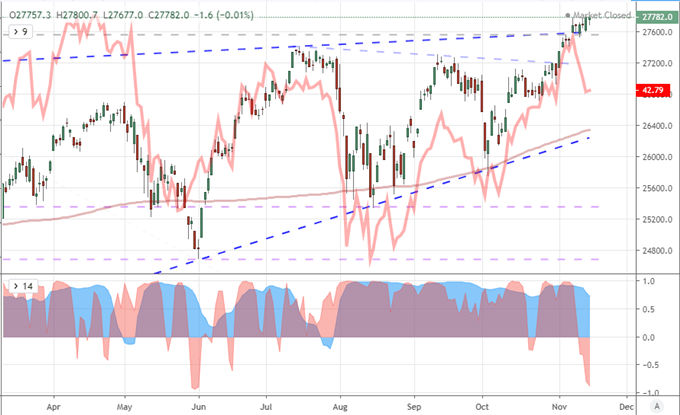 There were a few meaningful updates this past session - both scheduled and unexpected - but the docket ahead is particularly light on the seismic updates. If I were to choose among the three major drivers that have traded influence over the markets - growth concerns, trade wars and monetary policy - I would place the balance of power with trade. This past session offered another run of confusing and conflicted headlines around the negotiations between the United States and China. A report from the FT reinforced the previous days rumors that Beijing is holding up progress as it looks for Washington to commit to rolling back tariffs. To keep the doors of hope open, on the other hand, sources from the US Trade Representative's office suggested deputy level talks were extended this past session - just enough to keep anticipation rumbling. On the other hand, remarks from Attorney General Barr that Huawei and ZTE were "threats to our collective security" keeps this a multi-faceted affair. 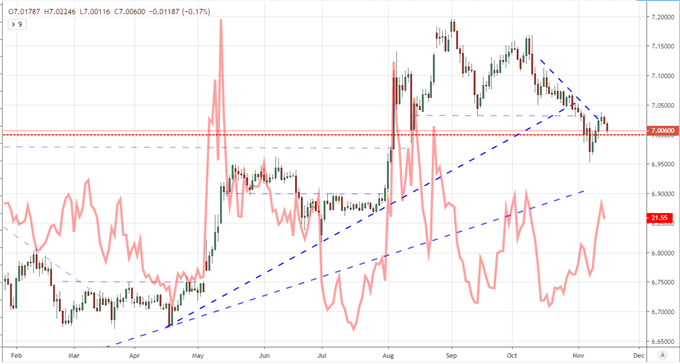 While the probability of a flare up in the US-Chinese negotiations is particularly high, the impact that it may have is tempered by the frequency with which mood around the risk has flipped. The potential around the White House's decision on auto tariffs can be far more severe as far as market response goes. Deciding against the tax is a best-case scenario, but it will not likely give much lift to risk trends as it keeps status quo. Deferring the decision again will be a reflection of more uncertainty around strained global trade relationships already troubled by situations such as the US tariffs on imported European agricultural goods. It is an outright tax action on imported autos and parts that would carry the most extreme impact. Broadening this trade war to envelope the developed world would pose a far greater global risk.

Another weighty global matter that seemed to avoid a disastrous shift for investor sentiment was the assessment of growth. The Japanese economy grew at only a 0.2 percent annualized pace through the third quarter, a significant miss of the 0.9 percent anticipated and 1.8 percent previous. That caution was amplified by the October Chinese data run which showed industrial production, fixed asset investment and retail sales growth slow. The saving grace was Germany GDP. The reading was not particularly robust, but 0.1 percent growth would officially head off a technical recession. A contagious stigma could have easily followed a stalled growth from Europe's largest economy. A modicum of peace has been bought. How long does it last? 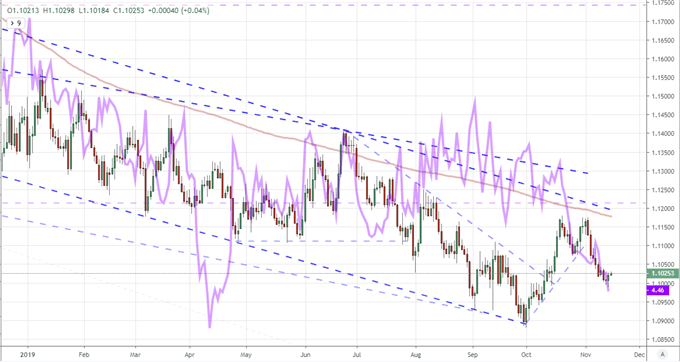 There is little on the docket that I would consider a meaningful update to the picture of global growth. That makes it a less likely candidate for charging a global trend. Monetary policy is the least systemic channel, but it has been responsible for a few targeted bouts of volatility. If the markets were not defined by a lack of conviction, perhaps some of these sharp moves could develop into trends; but that remains a pernicious hurdle for those chasing unrealistic moves. The Dollar was an example of a currency responding to policy forecasts in the short term. The slowdown in the upstream US inflation statistics and Fed Chairman Powell's remark that trade uncertainty contributed to the recession in manufacturing hit the Dollar. Paired against the Central Bank of Mexico's expected 25 basis point rate cut (to 7.25 percent), and USDMXN's recent charge was effectively throttled. 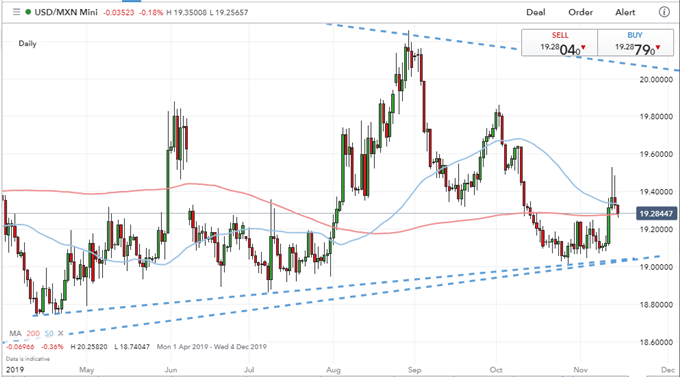 The New Zealand Dollar was charged earlier this week when the Reserve Bank of New Zealand (RBNZ) unexpectedly held its benchmark rate unchanged at 1.00 percent. The news was good for a sharp Kiwi rally, but the subsequent drive was all but absent. Even NZDUSD which should have been able to capitalize on the Dollar's pain would still drop. AUDNZD was perhaps one of the most interesting pairs given the Australian docket held consumer inflation expectations (accelerated to 4.0 percent) while employment statistics ruled the day with a shortfall. The AUD responded in kind, leveraging the China news to drive AUDUSD further lower and turning EURAUD's multi-year channel break into a false break reversal. Hold onto your skepticism and set your bar for confidence high. 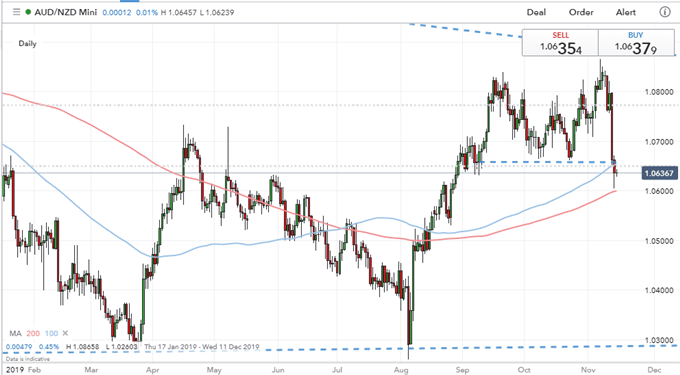