Once again, an evaluation of risk trends across the global markets was very much a function of what measure you held in the highest regard. Sentiment founded on low growth and yield but supported by external measures like central bank stimulus would naturally inspire an acute reach for yield with serious holes in the deployment of funds. Prizing sheer momentum for capital gains and steered by recognition through what best represents 'the market', it is natural that there is a preference for the US indices. This past session, the Dow put in the rare top performance with a fresh record high on an intraday and close basis. Though this benchmark and its peers (S&P 500 and Nasdaq) may offer some assurance against a persistent sense of impending doom for investors, it also isn't doing much to inspire unrestricted enthusiasm. The pace of progress, as it has been throughout 2018, is still seriously lacking. 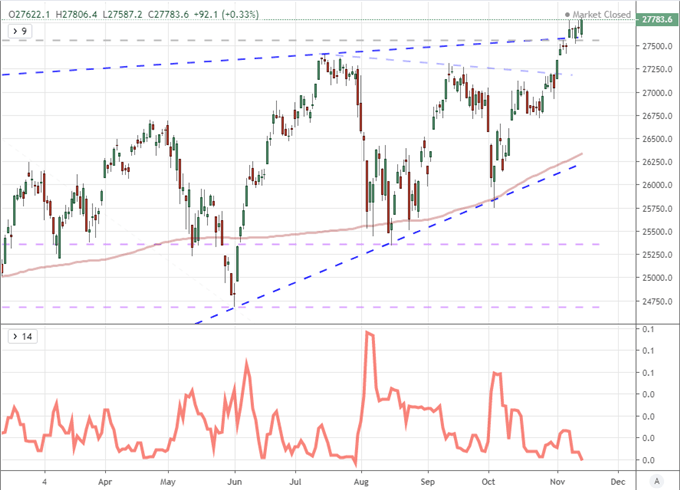 Yet, if we were to look more broadly at the level and bearing of speculative appetite, we would be left with a very different picture of the markets. I've mentioned many times before that there is a serious divergence in performance between the US indices and most other risk-based metrics. This is more than just a difference of a modestly outperforming asset type, it is a substantial contrast in pace and often direction. The easiest contrast can be drawn between a US pacesetter like the S&P 500 and rest of world equities - I like the VEU index. That said there is a more interesting signal to be drawn from a more atypical market for the speculative rank. The EEM emerging market ETF is not nearly as popular as US shares, but it has grown in popularity for those looking for higher rates of return. Yet, comparing the likes of the EEM to the Dow, we have seen a serious contrast in both tempo and direction just recently (the past week). Historically, this has been a sign of a trend reversal with the EEM leading the way. This is not a certainty, but its roots are in speculative habit and not just happenstance. Have a plan should risk trends continue to crawl higher as one should they fall apart. 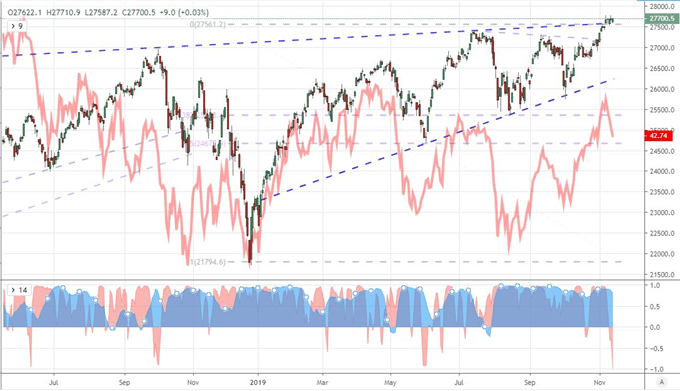 Powell Testimony Fails to Either Reassure or Restrict, Growth an Underlying Concern

Among the major fundamental themes on tap this past session, the focus was on monetary policy. Fed Chairman Jerome Powell was testifying in Congress for the first day of a two-day showing. Following three consecutive rate cuts, there was clearly a lot of interest in what this central bank intended to do going forward. It was even more interesting against the backdrop of global counterparts expanding their negative rate and stimulus regimes while President Trump has taken pains to callout the local monetary authority. However, whether a reflection of Powell's prowess to walk a group line or the general distraction in impeachment proceedings elsewhere, this summit yielded little more than a suggestion that they don't intend to cut rates again as long as growth holds. More meaningful for the Dollar was last month's US CPI update which accelerated slightly to a 1.8 percent pace, edging the reading closer to target. The Fed Funds futures shifted after the report to price a 55 percent chance of no further cuts through end of 2020 (including an 11 percent chance of a hike). 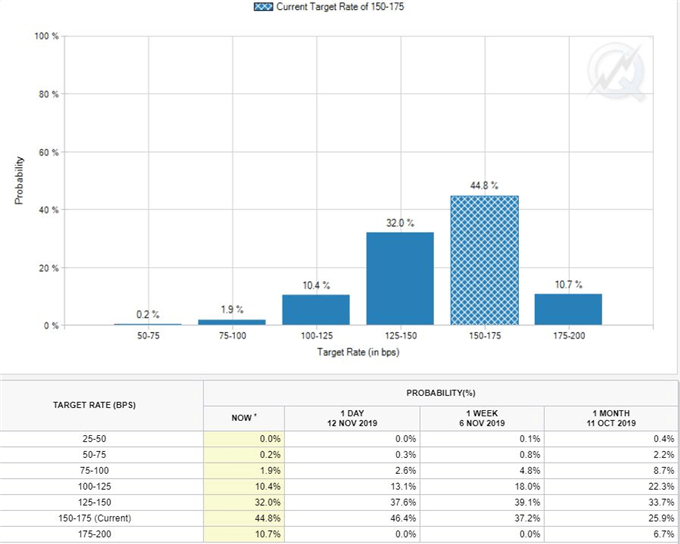 If you are looking for substantial monetary policy movement, the theoretical best candidate would have been GBPUSD. Where the US CPI figures advanced closer to target, the UK's own inflation statistics cooled with the headline consumer reading slowing from a 1.7 to 1.5 percent pace. And yet, Cable showed little of the expected response to this dual feature. Ahead, I will be watching for the Bank of Mexico's monetary policy decision with economists projecting a 25-basis point rate cut (7.50 to 7.25 percent) - which will be an important event given USDMXN's technical break above its 200-day moving average this past session. There is also a Fed-hosted policy conference that should speak on broad policy but my expectations for market movement will be held low. 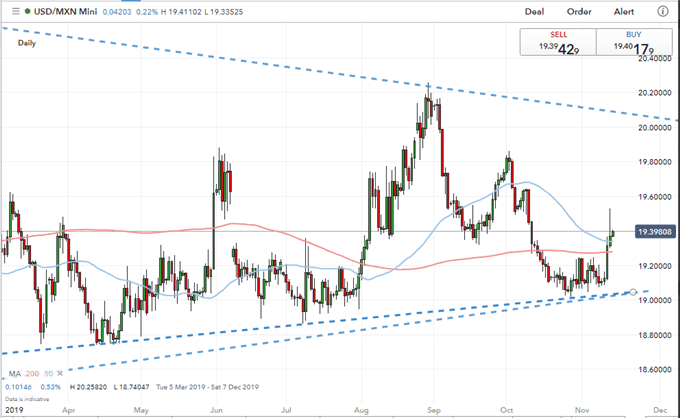 Held to a similar level of potential influence, we are also due a run of meaningful growth-oriented data; but it would take a compounding run of favorable or unfavorable data across country lines to move the global needle. Already in early Asia trade, we have seen Japan grow at a far less inspiring 0.2 percent this past quarter (versus 0.9 percent forecasted) and a run of Chinese data for the month of October slow materially. Looking ahead to the European session, the German 3Q GDP update could project a uniform global slowdown; or it may otherwise break the string of misfortune. The more market moving outcome would be a technical recession which carries the heavy stigma of contraction, even if it is a very mild retreat.

Trade Wars Generates Volatility, It Could Readily Detonate Panic with an Autos Tariff

Not an unexpected turn of events, but certainly not scheduled, was the influence that trade war headlines would one again exert over the global capital markets this past session. A sharp but limited risk aversion through the trading day Wednesday was triggered by reports that there was a snag in US-Chinese negotiations over the purchase of agricultural goods purchases (not what I expected to be the problem) as well as push back from Beijing on curbs through technology transfers and automatic enforcement mechanisms. Later in the day, President Trump suggested talks were moving along 'rapidly', but the reports and jawboning are so frequent that these unofficial updates wouldn’t hold sway for long. Nevertheless, the deviation between USDCNH and the S&P 500 does raise concern if this is a principal driver for recent optimism. 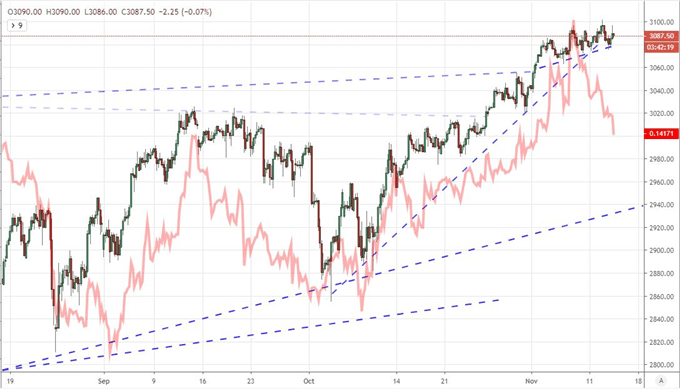 While it is important to keep appraised of US-China relationship headlines, something far more pressing for the immediate future is President Trump's decision on auto tariffs. Six months ago, he deferred a decision on whether to act on a US Commerce Department evaluation on the negative influence of imported autos and auto parts (a Section 232), and that deadline is now at hand. There were reports earlier this week suggesting the Administration was likely to punt the decision once again and use the uncertainty as leverage in ongoing negotiations with regions like Europe which are already heating up after the WTO-based tariff moves. Then again, there have been rumors on the opposite side of the spectrum suggesting the President may move forward with the taxes. The market is positioned for the latter but we should have plans for both outcomes, particular given the risk aversion impact a new front on a global trade war would have. I would watch risk as much as I would EURUSD or USDJPY - pairs with serious exposure. 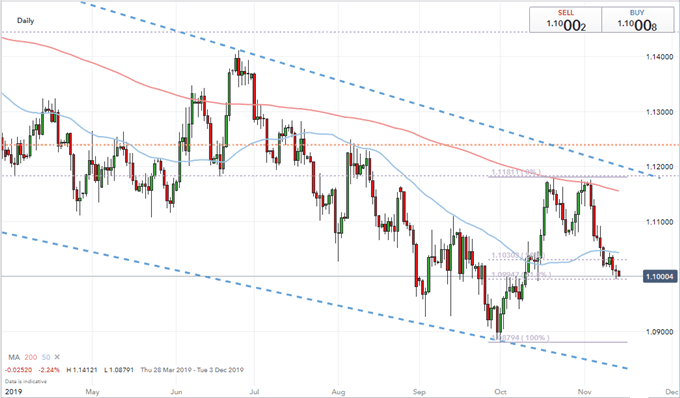