There was little change in intent from the benchmark US indices this past session. A nudge higher from the S&P 500 maintains the very publicized proximity to record highs - reinforcing that self-fulfilling optimism based in complacency. Yet, another of the most closely watched of these indices marked a more symbolic. The Dow carved out a fairly narrow range for the day but it closed Tuesday at exactly the same point that it ended the previous session. That is a remarkably rare event, but the statistic alone doesn't imply anything for intent for activity or a committed change of direction. That is drawn from context, and the context is definitely loaded. The recent six-day trading range from the S&P 500 remains one of the most restricted spans of the past few years. That said, such congestion, even after a meaningful climb, has not preempted reversal for this market. 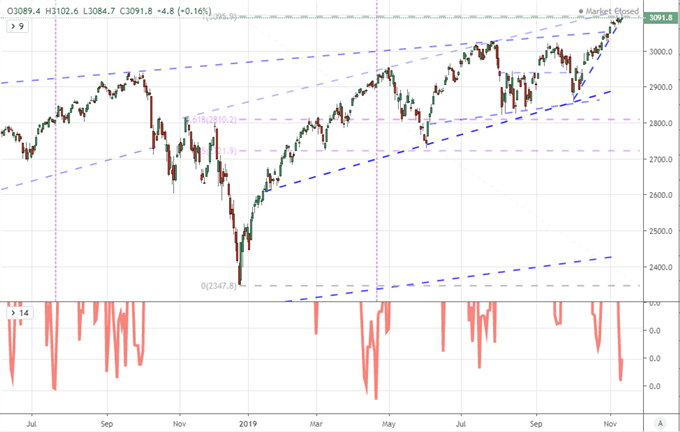 In contrast, one of the other risk-based asset classes I keep tabs on for a more comprehensive overview of speculative health has established an even more extreme posture. USDJPY, as a representative of carry trade, has established the smallest 20-day range (equivalent to a trading month) since April. Before that, we have to look back all the way to 2014 to find a comparable degree of inactivity. These are very unusual events; and unlike similar readings from US indices, these instances have held strong corollary to reversals. The Yen crosses can chop for a while longer and don't have to act as the leading indicator for all risk, but this isn't the only asset class showing at least tentative correction. Global shares, emerging markets and even some growth-tinged risk assets have seen a retreat recently. Keep tabs on the breadth of risk measures and not just preferred outperformers. 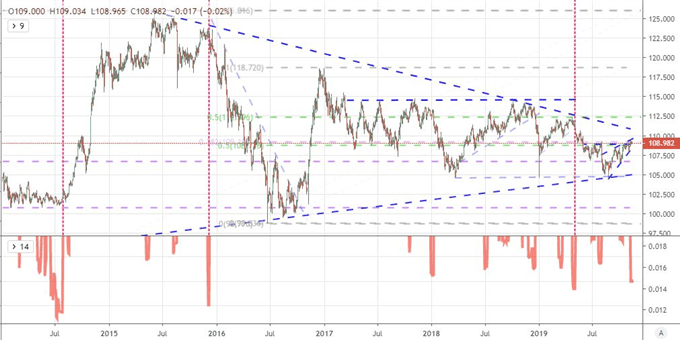 Complacency has manifest itself through so many overt signals over the weeks, months and years. What is truly impressive is the market's ability and willingness to overlook the warning sides. In addition to the record highs for US indices, there has been an almost zombie-like growth in exposure with all available capital being directed to risk exposure and the use of leverage hitting record highs for all market participants (consumer, business, investor, government, central bank). Yet, collective insanity can keep control of the markets for far longer than skeptics - including myself - would otherwise think possible. In the meantime, exposure and thereby risk continues to build. There are signals like that from CNN's Fear-Greed index which is heavily tilting towards the latter extreme. Further, a Bank of America Merrill Lynch fund managers’ survey showed some of largest navigators of capital have reversed course sharply in their worries over recession (+43 points) while reducing exposure to cash as idle capital or haven to its lowest level (4.2 percent) since June 2013. I still believe the height of excess is the record net short in speculative VIX futures positioning, leveraging risk-taking to the very extreme. 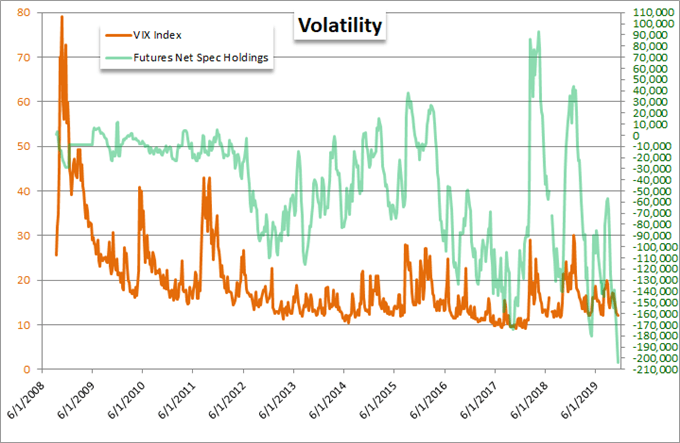 Looking to the systemic that could either drive or reverse underlying trend, the first place to monitor this past session was the current of trade wars running through the market. The balance of power between the US and China remains the most contentious and globally-taxing relationship through today so it was perhaps forgivable that considerable anticipation was centered around President Donald Trump's statement. The leader was scheduled to speak to his policy around trade and economic policy Tuesday, though there was an appreciable level of skepticism as to what he would definitively announce. As is customary at this point, his talk was a long one but there was nothing that would plot a clear course to a definitive agreement with China overall, nor even a new stepping stone towards the Phase One signoff. 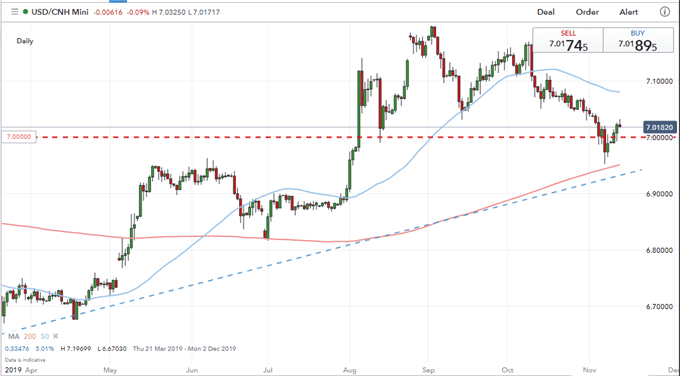 Further important on the persistently overbearing trade front were contradictory reports to Monday's optimistic headlines that the White House would defer a decision on broad auto and auto part import tariffs another six months. There was a Politico story that fit a scenario whereby President Trump would use the threat of a painful tax against a key European industry to direct negotiations. That strategic perspective would come up against an equally-appreciable rumor for Fox Business suggesting that USTR was drafting a report for the White House urging for tariffs on autos and part against specific economies and the EU. It would seem a brash move given the state of affairs lately with sentiment, but I would not write it off at all.

For another key focal point this past session, President Trump was speaking on both trade and economic policy. His insight on the economic health for the world's largest economy was far from definitive - much less reassuring. Though the leader of the free world was optimistic, there were few tangible milestones to point to that would even come close to describing fruitful steps to expand economic girth or even the business environment. A suggestion of another corporate tax cut didn't seem to resonate. In the meantime, the US NFIB small business report was a modest bump while Japan's machine tool orders continued to flag with aa -37.4 percent contraction year over year. I thought the most remarkable update on the day though was the Alibaba updates with a record breaking $38.4 billion in sales for the local Singles' Day holiday which could serve as a very favorable cue as to the forthcoming year-end spending season that is so vital to whole-year economic growth. 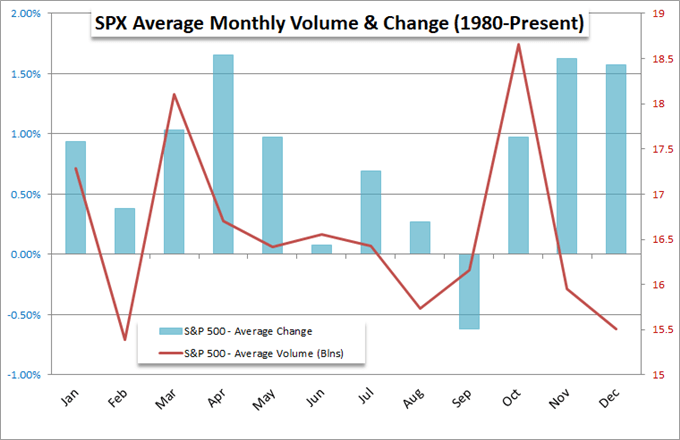 Looking ahead, trade wars and growth will not be fully defused as global motivators. In the former, the deadline to defer or apply taxes on imported autos and auto parts is very clearly pushing in the background for a Thursday resolution. So long as it is not formally pushed back, the risk will remain. In turn the fear of recession is a concern that no one can afford to overlook given its implications, so GDP figures such as Russia's, Japan's and Germany's third quarter update over the next 48 hours will pose some serious pressure. That said, the most measurable event risk in the thematic scheme is the pressure via monetary policy. In the strategic hierarchy, trade wars is a driver for a global economic slowdown, which leaves the Fed and other major central banks on the hook to fend off the risk; but recognition of this group's reach is souring by the day. And, certainly, President Trump's critique of the Federal Reserve does little to improve this situation.

On tap, we will see Fed Chairman Jerome Powell visit Congress to testify before Congress. The first day in Washington for the central bank head is usually the most important as the gamut of critical topics will already be exhausted. As it stands, probability of further easing from the world's largest central bank is nonexistent through the last scheduled meeting of the year. The debate is really around the chances that a 2020 cut are in the cards. Fed Fund futures are close to a 50/50 chance of another cut which is both very optimistic about the economic/financial backdrop and a serious concern as to the anticipation of limitless support for an otherwise lackluster natural economy. There are broad risk implications here, but I will be watching the Dollar for the more sensitive measure.